Zaria Forman uses her hands and fingers to transform pastels onto canvas, creating huge works that draw our attention to Climate Change. She is best known for her glacier works, with a percentage of the purchase of her work going to a charity that will directly benefit the area she is inspired by.

Zoneone Arts is delighted to bring Zaria Forman to you… 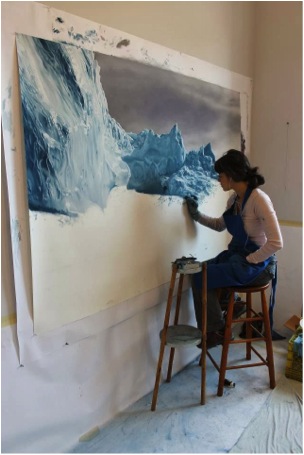 After attending Skidmore College in the USA, Zaria Forman developed her own technique. Not only does she use her fingers but her work is on a large scale. 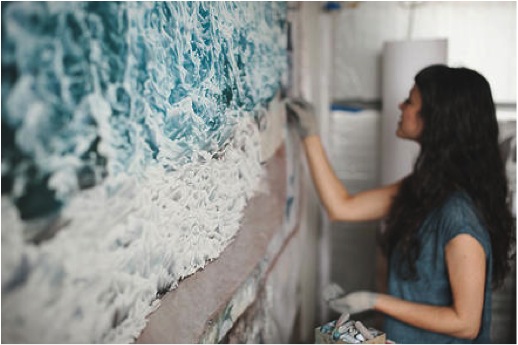 In her paintings she is able to capture both freezing cold seas and icy seas. 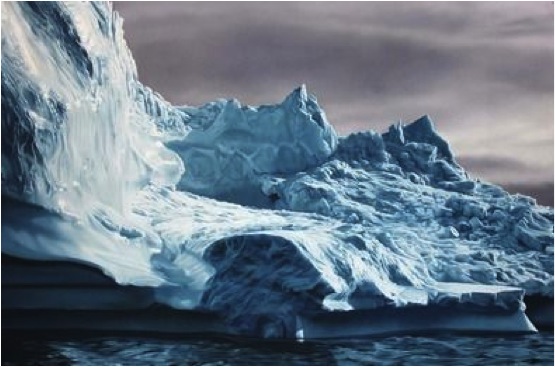 All of this is done with soft pastel.

Travel has always been a large part of Zaria’s life. From early childhood, she has travelled with her family to many of the world’s most remote landscapes. Travelling with her mother, who was a landscape photographer, lead Zaria to a very early understanding of seeing the view.

It was because of this that Zaria was lead to fulfill her mother’s dreams of gathering together family, friends, artists and scholars into one team. She took them on the voyage, following in the steps taken by William Bradford in 1869, when he sailed the northwest coast of Greenland.

Zaria said that the feelings she had were. “…both the power and the fragility of the landscape in Greenland. The sheer size, majesty and beauty of the icebergs is humbling.”

In August 2012, Zaria led the expedition, called ‘Chasing the Light”, up the NW coast of Greenland. “It was the second expedition the mission of which was to create art inspired by this dramatic geography. The first, in 1869, was led by the American painter William Bradford. My mother, Rena Bass Forman, had conceived the idea for the voyage, but did not live to see it through. During the months of her illness her dedication to the expedition never wavered and I promised to carry out her final journey.” 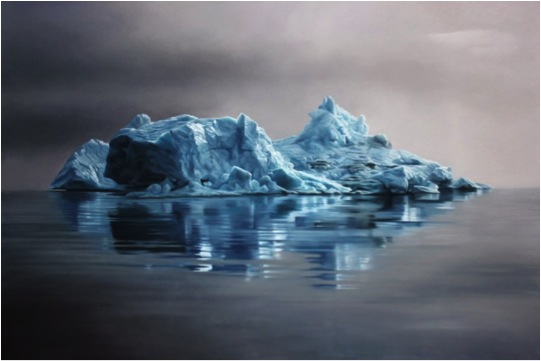 “Documenting climate change, the work addresses the concept of saying goodbye on scales both global and personal. In Greenland, I scattered my mother’s ashes amidst the melting ice.”

“I am deeply grateful for the team of talented artists and scholars and the Wanderbird captains and crew for helping me carry out my mother’s wishes and realize her dream.”

A percent of all Greenland drawing sales will go to 350.org. 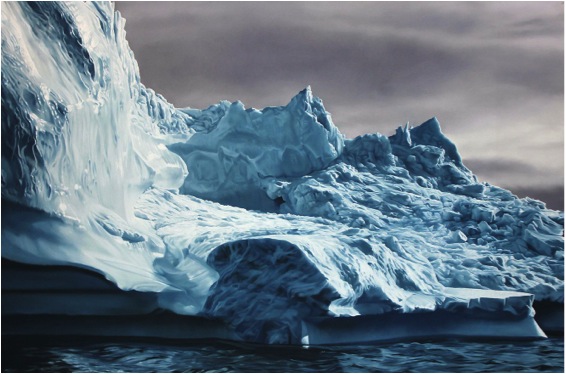 This was not to be the end of Zaria Forman’s work with climate change. She moved from melting Polar Regions in the Arctic to the equator, and more especially to the Maldives. “I followed the meltwater from the Arctic to the equator. I spent September 2013 in the Maldives, the lowest and flattest country in the world, collecting material and inspiration to create a body of work celebrating and representing a nation that could be entirely underwater within this century.” 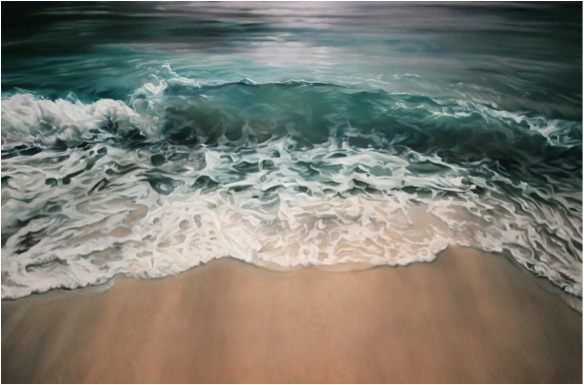 Zaria travelled with two award-winning artists who participated in the Greenland expedition, Chasing The Light. Joining her in this venture: Painter Lisa Lebofsky, and director, filmmaker, and actress Drew Denny. 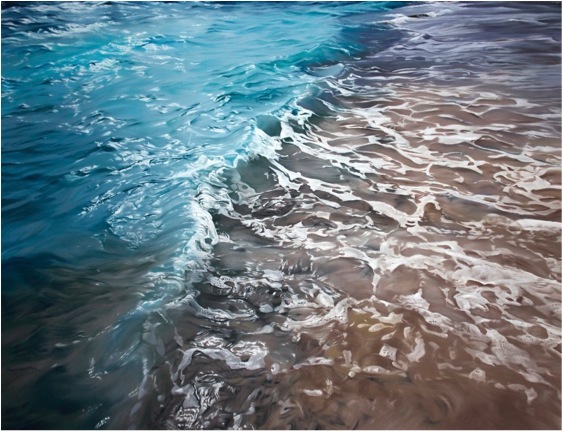 “I hope my drawings will raise awareness and invite viewers to share the urgency of the Maldivians’ predicament in a productive and hopeful way. I believe art can facilitate a deeper understanding of crises, helping us find meaning and optimism amidst shifting landscapes.”

“Wherever we live, we need water to survive. Not only is the human body sixty percent water, but water is also essential for producing the things we need like food, clothing, and computers; moving our waste stream; and keeping us and the environment healthy.” 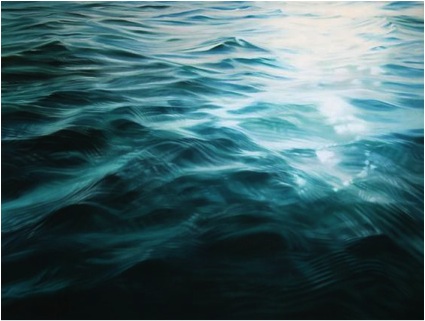 “And yet, while water scarcity is an abstract concept to some, it is a stark reality to many–some regions seem flush with fresh water, while others face drought and pollution. Myriad environmental, political, economic, and social forces produce this water scarcity.” 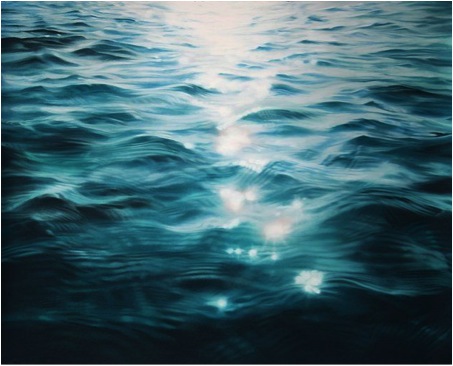 “During the summer of 2010, I visited Thompson Lake in Casco, Maine. One of the most pristine lakes in the state, this 12-mile-long lake is situated next to the Poland Spring Aquifer. I was struck by the silky, smooth quality of the water. Sipping it as I swam, a sense of gratefulness overcame me. The purity of the water here is no accident.” 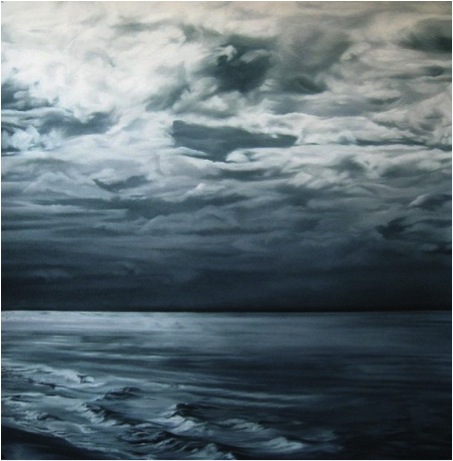 “Through education programs and monitoring of the lake and its watershed, The Thompson Lake Environmental Association preserves the lake’s natural beauty, water quality, and biological diversity. Such practices set a prime example of how we might effectively conserve and manage the fresh water we have on our planet.”

Again Zaria commits to the charity that is the most appropriate to the work she has done, so 10% of all sales from this body of work go to water.org. 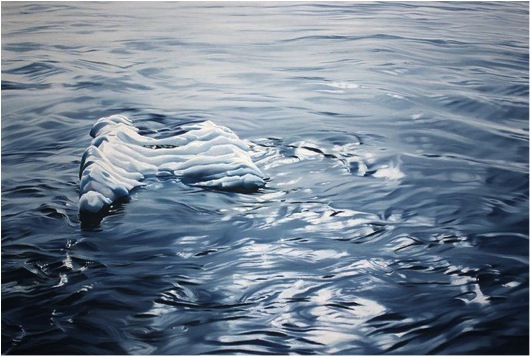