Yasemen Hussein, South London, UK, Photo by John ChaseExcitement and enthusiasm just flows from this artist. In such a short time Yaseman Hussein has taken her bespoke sculpture so far. 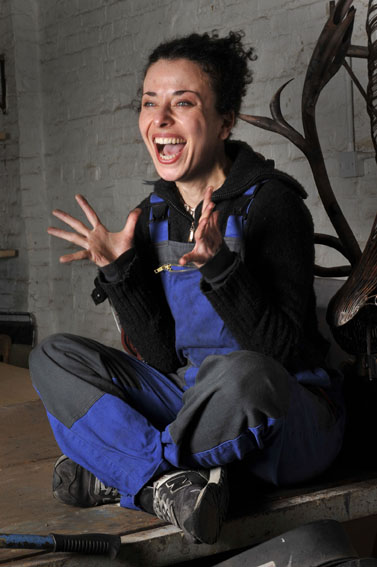 What made you move from glass to metal?

I actually started off my imagined career as a dancer, god did I want to be a dancer, but my parents were strict Turkish Cypriot immigrants in Birmingham and it was too much of a leap of faith for them to let me follow this.

When I won an assistantship to do my Masters degree in the USA it was genuinely a complete shock.

I had only applied as incentive to get my work finished quicker, get them photographed and keep the Turkish community off my back, as long as I stayed in education I could avoid an arranged marriage.

Now that was powerful incentive!

Going to Illinois State University blew my brain, physically, culturally, and definitely in my work.

The MFA was heavily dominated by male glass blowers, my background was lost wax casting, I was young and easily intimated, but it actually worked in my favour.

There was such freedom within discipline’s and processes that when I was challenged to try something more thought driven than technically driven, Pandora’s box flew open, that’s when I turned to mythology and metal to interpret my new challenge.

I would never have made the work I made if I had stayed in the UK, but I also couldn’t have afforded to do a Masters degree in the UK. 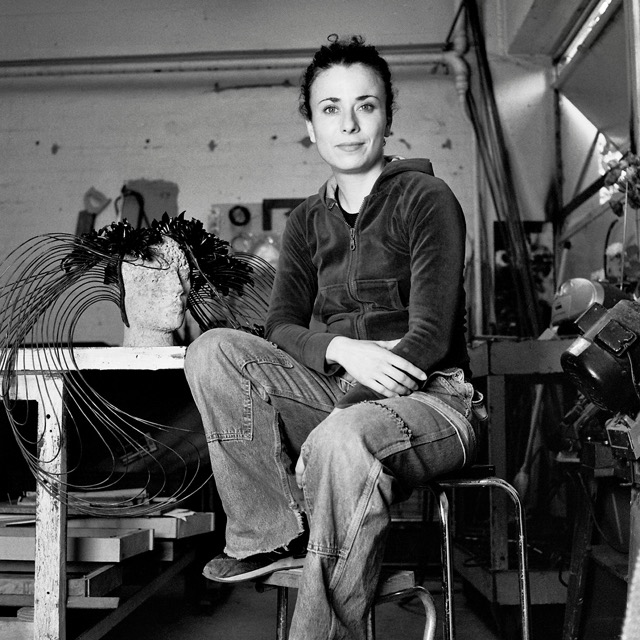 What was it about electrical cables that go you so excited?

I had never been to a scrap yard in my entire life, and this was the 90’s in North Carolina, while I was taking a blacksmithing course at Penland School of Arts and Crafts, before health and safety had gone nuclear.

We got to climb around in all this scrap, I LOVED it! I’ve always had a thing for the industrial, for metal, for rust.

At this scrap yard there was a building just for copper, when I walked in and there was a mahusive pile, up the ceiling (or that’s how I’ve memorised it!) of bright bright electrical copper wire, it looked like a giant’s hair, all elegant curls and chaos! 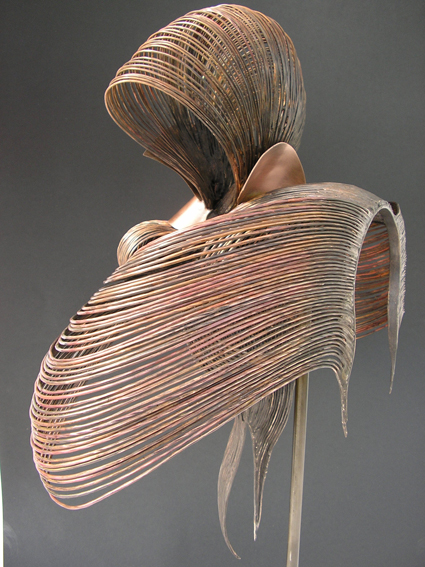 How did you and your metal wigs become involved with the V&A? 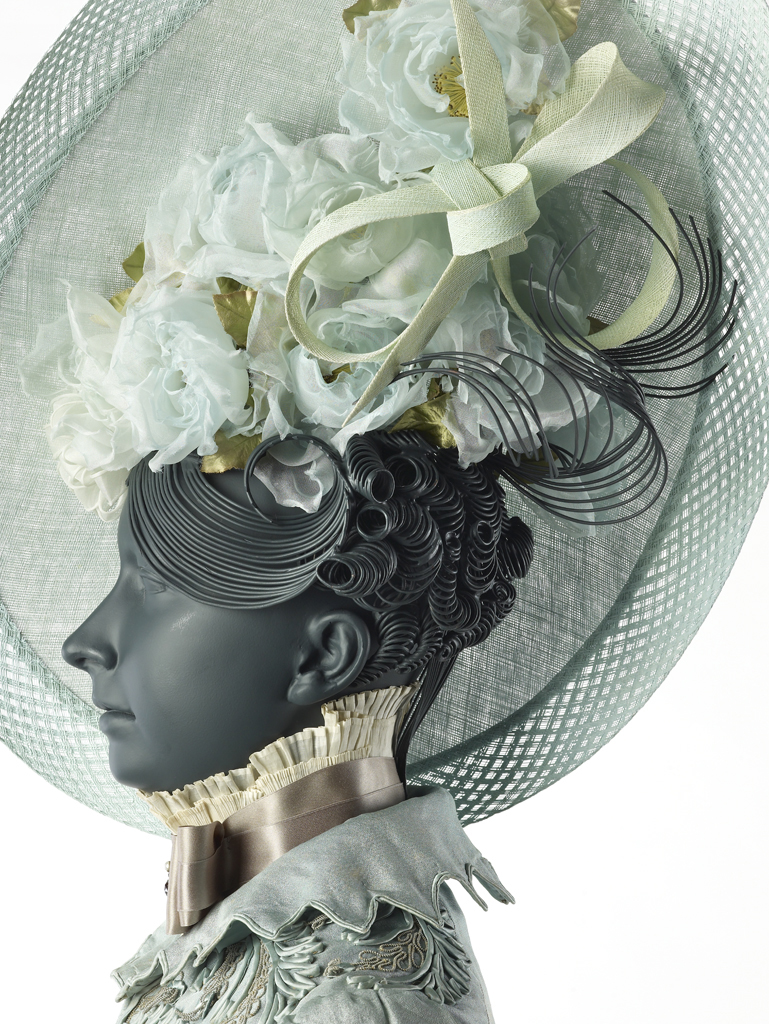 Years ago, I was randomly introduced to Philip Treacy, he was in the middle of a commission with the Museum of London to make hats for an exhibition called The Vauxhall Pleasure Gardens.  He asked me to make the wigs for the mannequin’s, I made over 20, some interacted with his hats, some alone. 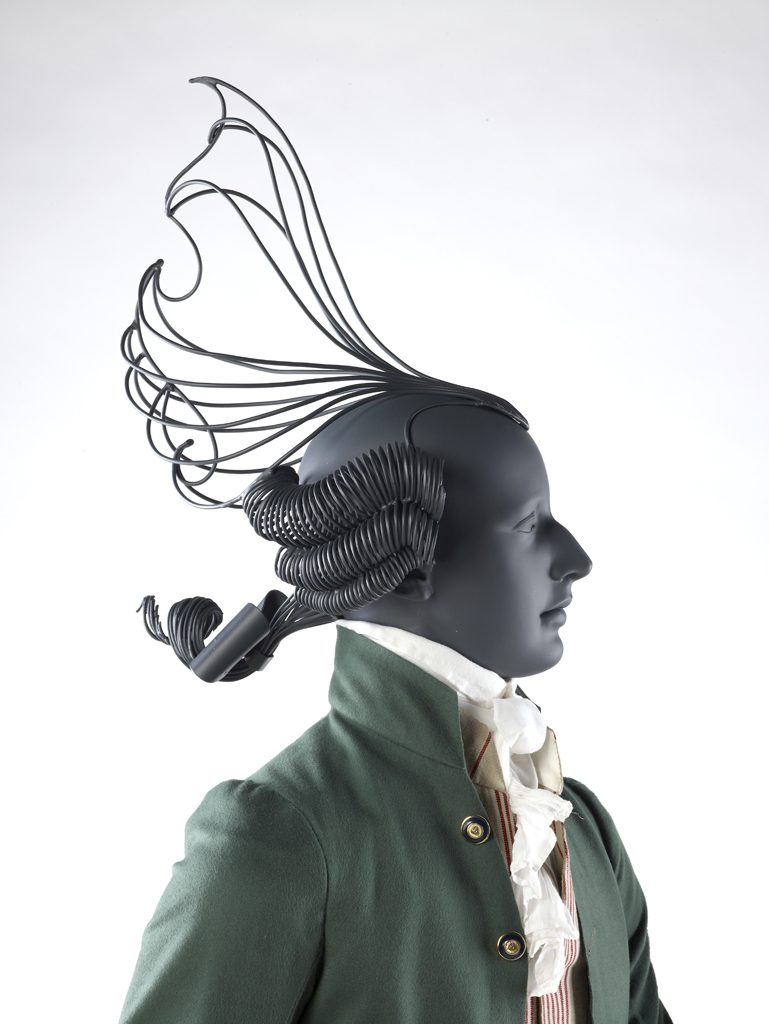 Someone at the V&A years later had seen these wigs and that’s how I got contacted to make some wigs for their exhibition Passion Power and Politics in 2018. I have to say it has always been a dream of mine to get work into the V&A and when I dropped off the work; I did cry with sheer joy….not the most professional moment of my life but a real dream come true! 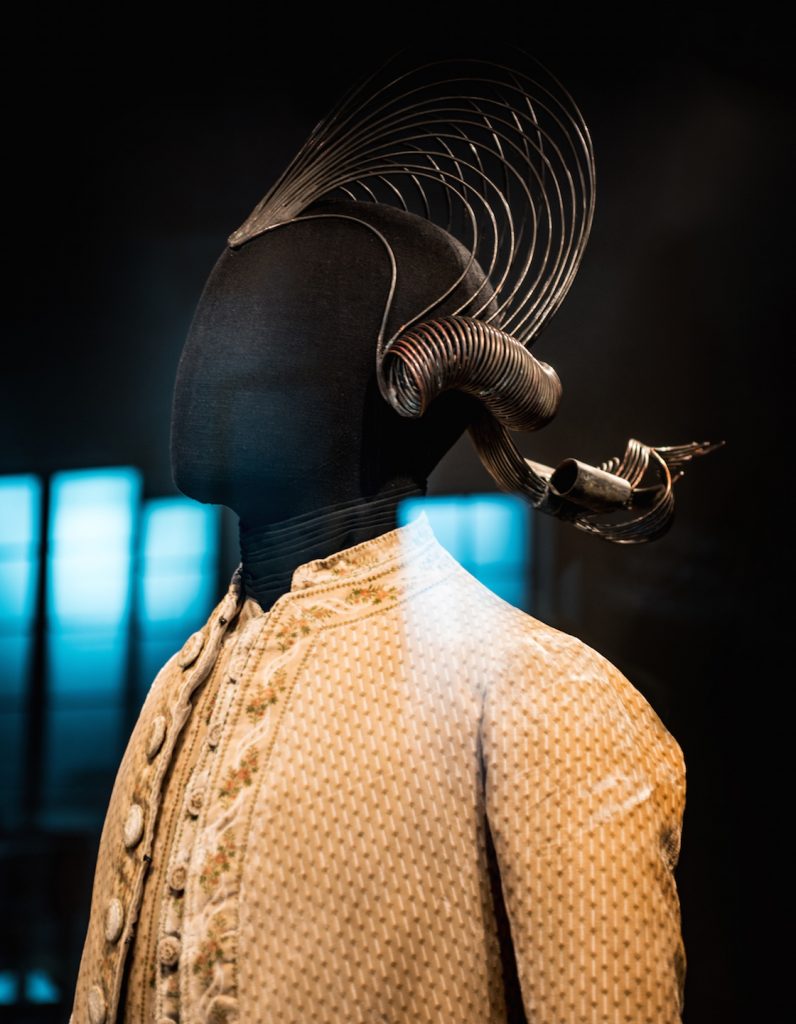 Discuss the actual history of hair and wigs that is so intertwined in your work?

In honesty I started to make the wigs in North Carolina because the copper was literally begging me to do it! I had to because I could see just how perfectly it would work. 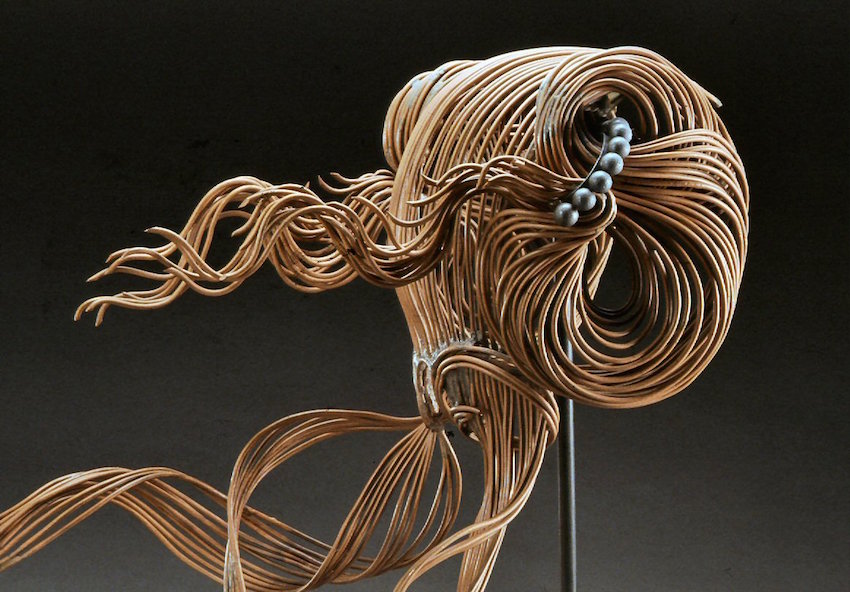 As soon as I made one, I was hooked. I have always been a gatherer of images, in the age-old world of libraries and photocopiers, before Google.  I realised I had many many images of beautiful women with hair I could never have, as I have a Turkish curly afro. The first 4 hair pieces I made were from a pictures of a young Marilyn Monroe, 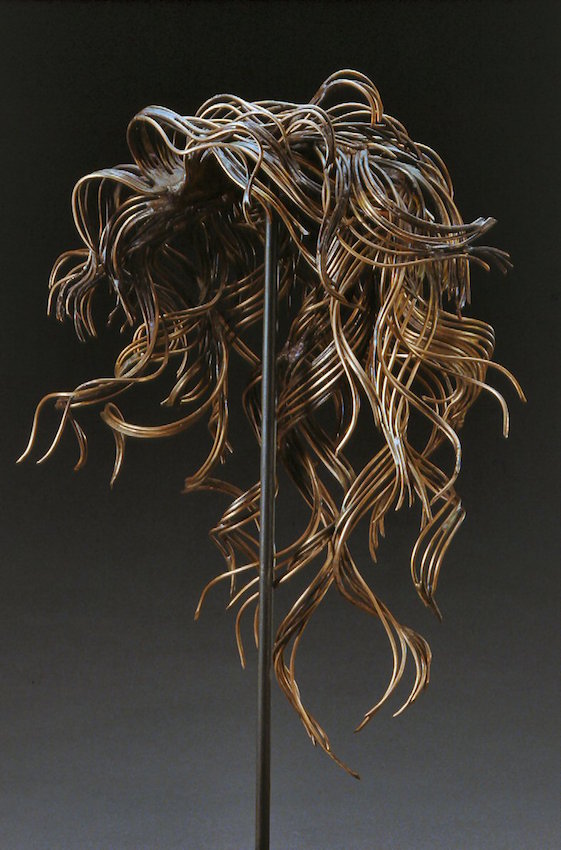 an Elizabethan queen, a Spanish girl and a Geisha. 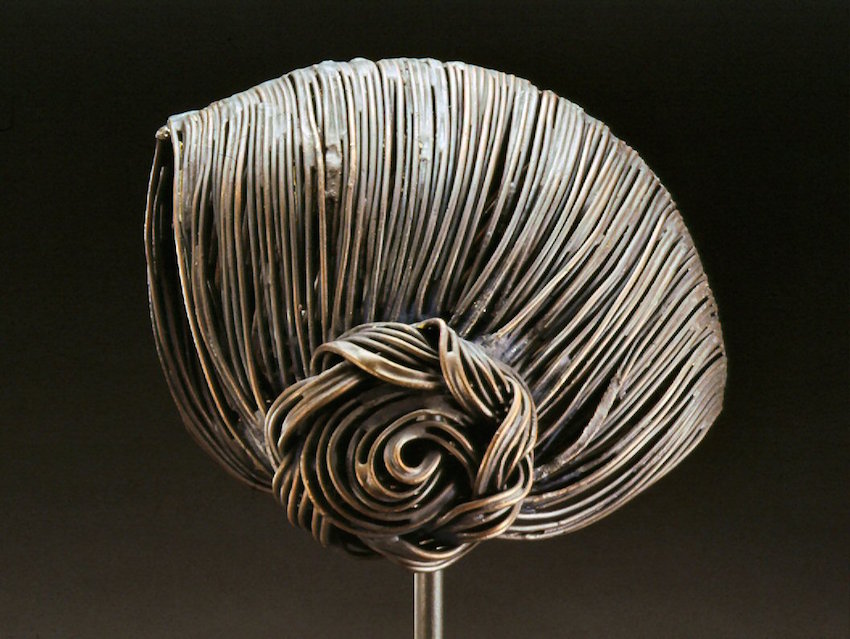 Wonderfully random and gave me so much to work with stylistically.

Explain another wig aspect of your work ‘Geisha’.

The Geisha hairstyle triggers off my imagination endlessly, I could keep making them and never get bored, the beautiful lines I see in them is exactly how I used to draw.

They have everything in them that makes me happy about a sinuous line, there is nothing more satisfying than bending soft copper wire into a perfect glorious bend!

To be honest with the Geisha I am driven by the aesthetic, not the culture or history of them. 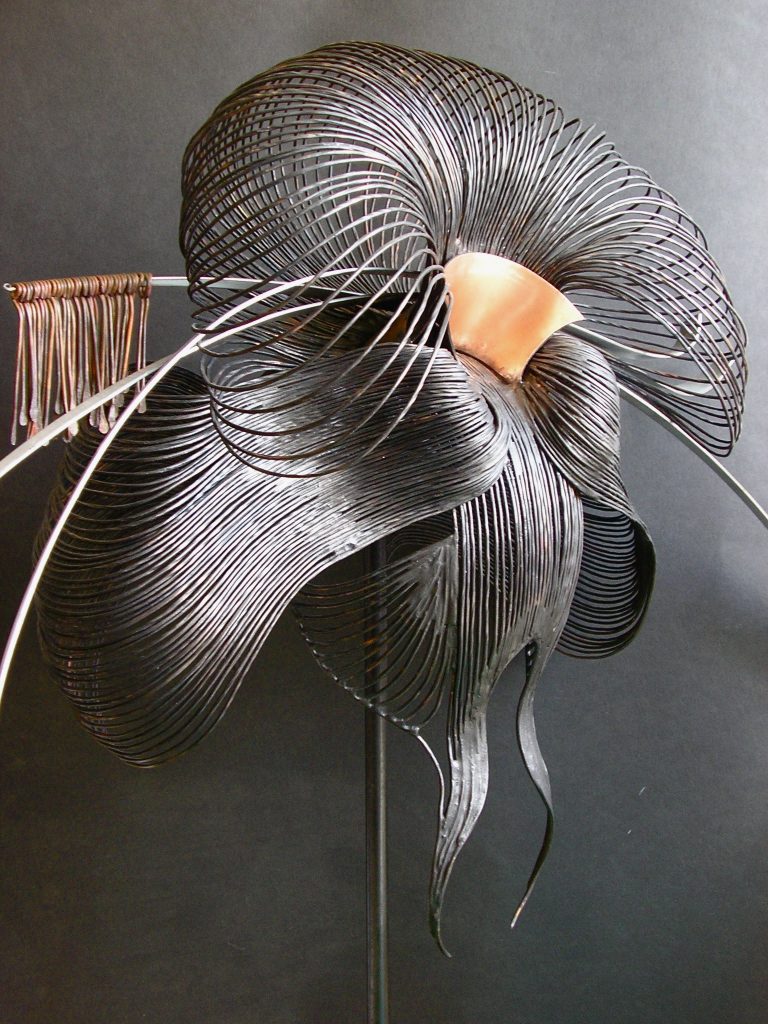 How has your work been used within retails settings? I have only had one commission specifically for retail, I was approached by the clothing company Joseph in Mayfair, London, to make a Geisha inspired window display, which was music to my ears! I loved making this work as I was allowed to push the imagery, all three pieces were a joy to make and I was really pleased with the outcome, and so were they. 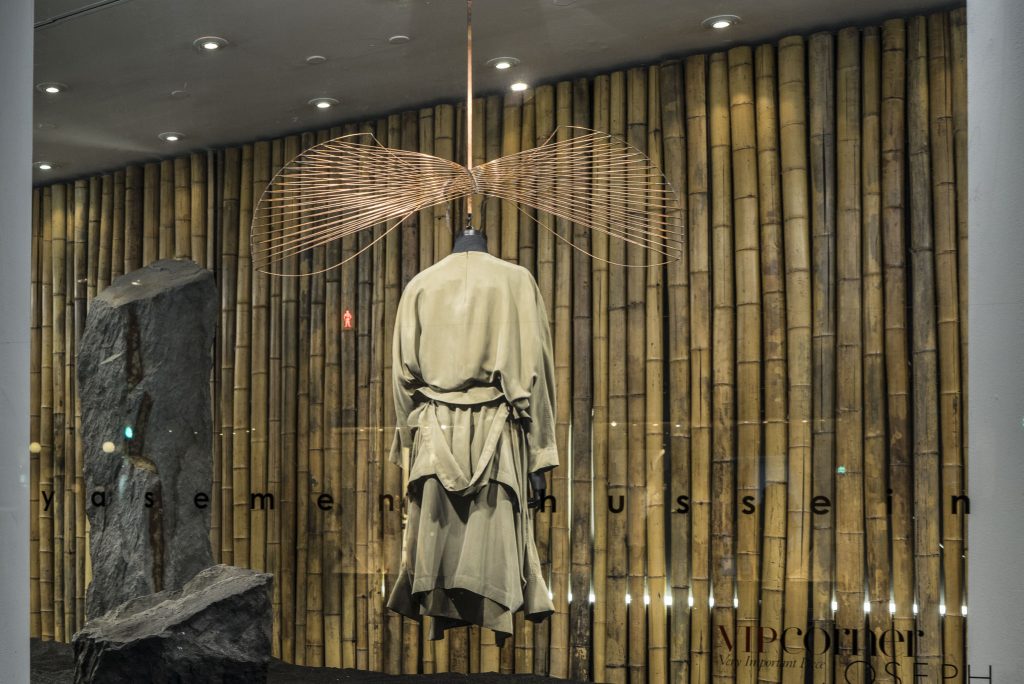 Expand on your feathers, within the Four Seasons in Tokyo? This was an incredible commission for me, a big learning curve, not only in scale but also technically, I’d never made anything so big, anything to be so public, so it was a mine field of negotiations. Once the design was accepted, I was lucky enough to find a company to help me with the technical aspects of making the piece earthquake proof.

Also, it was a challenge to find an electroplater that could bronze a piece of that scale. 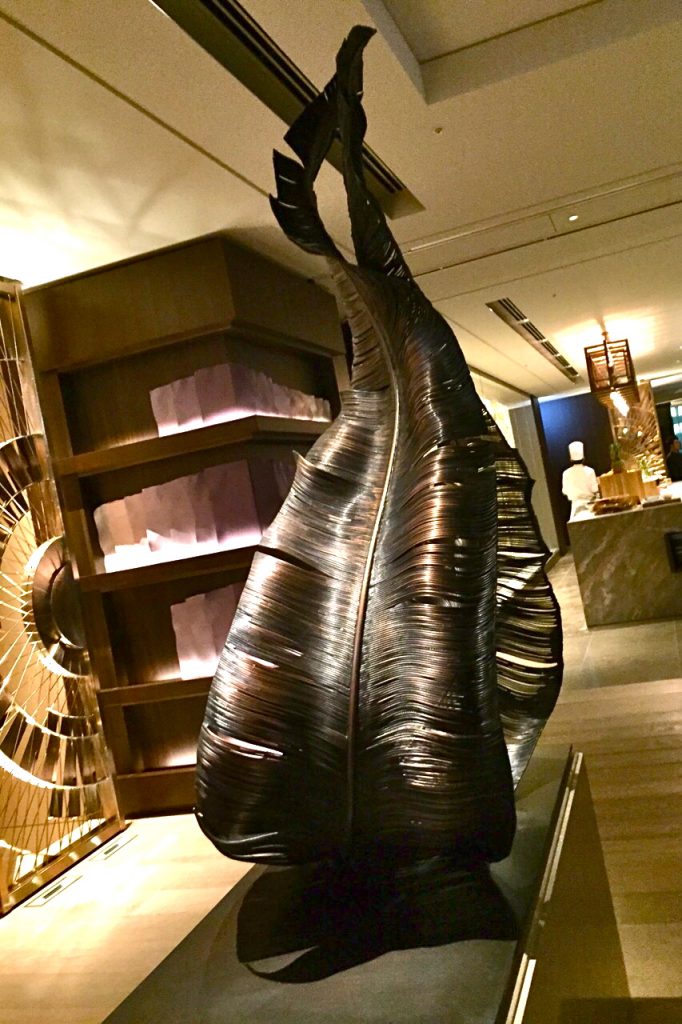 All of which I conquered, but it wasn’t the easiest of lessons to learn.

I think the act of delegation for a control freak is an important lesson!

Take one of the commissions you have worked on and discuss how this has extended and developed your art practice.

This is a tough ask as my working life has had no linear common thread, it’s been a roller coaster of random connections as I have not been represented by an agent or gallery.

Every job is a new set of rules. From making work to bend around Victoria Secret models to feathers on ceilings, to a cardboard replica of a Faberge egg! Every job I get I have to circle it like a wolf and figure out how I approach it, there has never been a set approach I can use for each job. You can’t publish this till after May 24th or I will be in a LOT of trouble! I will be able to send you pictures AFTER May 24th, this is the date the tour starts and I can’t publish anything till then.

has made arrangements with Yasemen Hussein and we will give you all a newsflash as soon as we have images that can be shared.  This is such exciting news and we are so grateful to Yaseman, that she is allowing us to share this amazing commission with images and a short introduction to her latest commission with really BIG names….  Can’t wait!

Interview by Deborah Blakeley, May 2019