Thomas Hill works in mild steel wire in various gauges, with additions of sheet steel, copper and brass. Tom also adds colour using enamel paint heating the metal before and after application to create depth of colour and texture.

Trained originally as a jeweller in London, he has since moved to San Francisco, USA.

“I use wire as it enables me to create a 3 dimensional drawing and to capture the feeling of animals in motion with the energy of a quick sketch.” Tom Hill

Zoneone Arts is delighted to bring his thoughts to you! 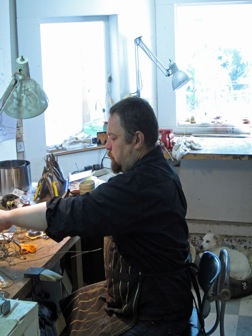 You have been working full time as a wire sculptor since 1994, winning the Setting up Grant from the British Council in 1994.
What did this grant do to help you establish yourself?

The grant helped in two ways. Firstly a small living stipend and equipment grant definitely helped at the outset of my career. Secondly, and I think more importantly, it really helped to build a professional network… The Crafts Council helped to promote my work and really got me on the crafts radar. My work was included on the “Index of Selected Makers” which led to public and private commissions. I showed work at the Crafts Council Gallery shops, both at the Crafts Council itself and at the Victoria and Albert Museum, took part in Chelsea Craft Fair a number of times and generally felt very much part of the UK craft community.

When and why did you move to San Francisco, USA?

I moved here to San Francisco from London in 1999. My partner, Mike Holmes is one of the owners of Velvet da Vinci Gallery, here in SF.

You continue to have many commissions in both the UK and the USA can you expand on two? 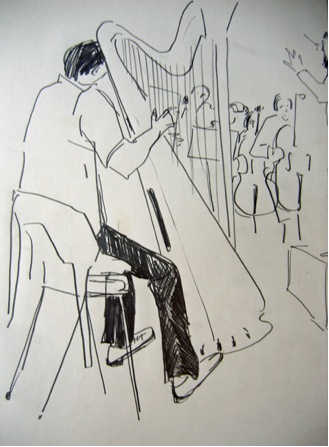 This commission came from having work on the Craft Council’s Slide Index… I was approached by the Orchestra and their graphic design company and produced a series of drawings and two dimensional wire pieces, which were photographed and used in publicity, posters, brochures and advertising for two seasons. I attended a number of rehearsals, making drawings of the players in a less formal situation than the concert hall would provide.

I’ve been lucky enough to have been commissioned to make a number of large scale bird commissions. The Tampa project is situated in a restaurant called “Oystercatchers” separated from the main hotel, in a bungalow style building right on the salt marshes and tropical mangroves of Tampa Bay. The commission consists of about 40 individual birds, of varying size and complexity. I think my work functions well in these kinds of projects on two levels. Firstly the open and visually “light” nature of my pieces allows for a large number of pieces in a space without the danger of the work becoming overwhelming. Secondly I arrange the pieces in a way that leads the eye around the room and animates the space, softening the hard straight lines and hopefully in bringing a little of the outside world in. 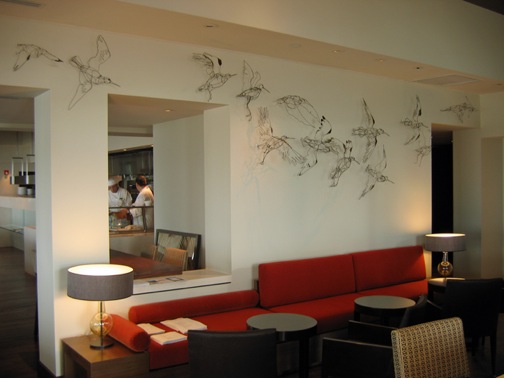 You call yourself a draftsman and metal worker, why?

I think of my work as illustrative. My work doesn’t have a strict narrative I am as concerned with conveying character and gesture as I am in describing form and texture. I’m not particularly interested in metal working techniques, the image is the important thing and the technique aspect is secondary. 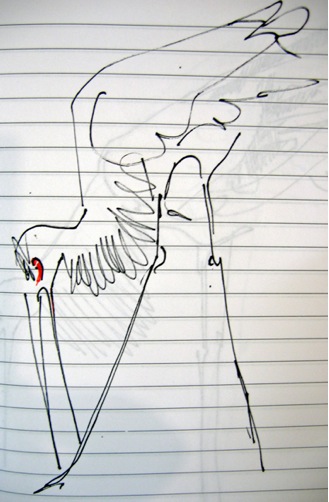 Tell us about the process your drawings take in the production of your work?

Drawing is always my starting point. I work in sketch book, preferably from life also from stuffed specimens or from photographs. At this point have an extensive library of images to work from. 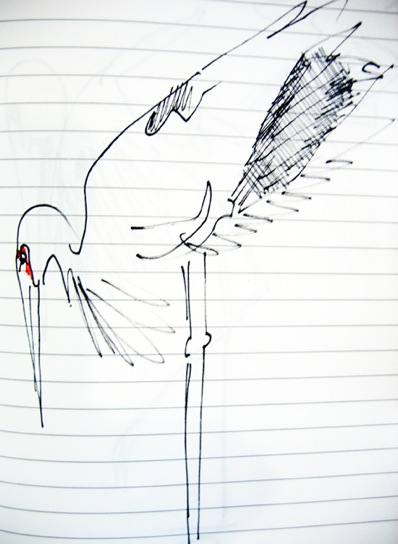 I tend to make a sculpture using a number of drawings of the same thing, different angles, poses and details.

I love the freshness that drawing from life brings to my work… I try to keep my work varied and interesting, for myself as much as for my clients. I think getting out of the studio and drawing is essential for this. I make new drawings all the time and return years later to drawings and use them to make objects. 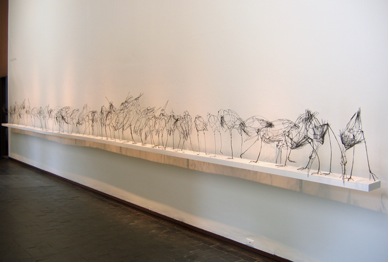 Eadweard Muybridge 1830-1904 had a profound effect on your work can you expand on this?

I was introduced to Muybridge’s photographs by the enamelist Ros Conway, who was one of my art school tutors and Muybridge has continued to be a huge inspiration to me. His photos convey movement and gesture in such a thrilling way. They are beautiful as an end in themselves. I have been drawing and re-drawing from them for the last 18 years. I have also worked with a life model and re-created the human poses, working directly in wire from the model.
I guess the main aim in my work is to make staid objects the imply movement and in this Muybridge and myself have and had pretty much the same goal. 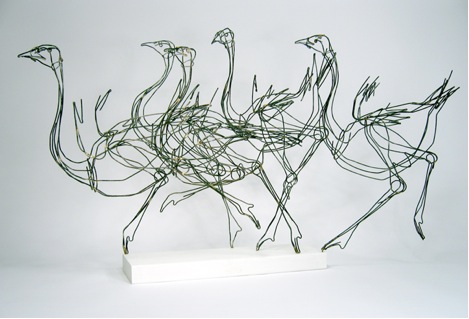 In more recent times, with the advent of digital technology, I have made my own videos of birds in motion, stop framed the video and made my own sequences a la Muybridge, drawing from the images on my computer screen and making sculptures from those drawings, this really opens top a world of new work and images.

One of my bigger exhibits was a solo exhibition at the Fuller Craft Museum in Brockton MA. (Just outside Boston). The show was called “Drawing on Muybridge” and I exhibited work based directly on Muybridge sequences, horses, ostriches and elephants in addition to a 40 foot long sequence using my own video of a crane displaying at San Francisco Zoo. 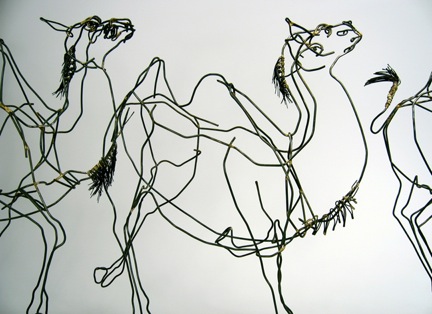 Your work with birds and you explain about the work of several of them?

I’ve been making roosters and chickens for years. They have a great combination of physical beauty, amazing plumage and balletic stance with a capacity for tremendous cruelty to each other. The skin on their heads is both beautiful and slightly repellent. 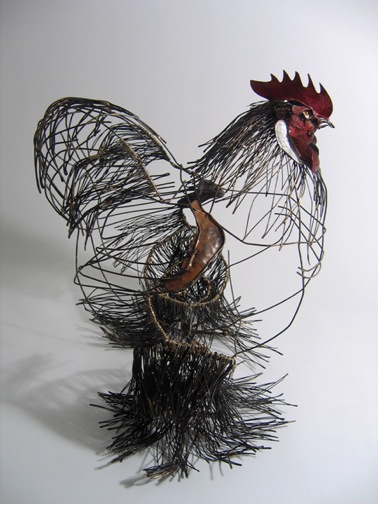 There’s this great book published every year for well over 100 years by the American Poultry Council, called, if you can believe it, “The American Standard of Perfection” which in air-brushed photographs portrays the ever unattainable standard for each variety of chicken, the correct stance, angle of comb to head, numbers of tail feathers etc. I have a lovely copy from the 1930’s, with photogravure plates of roosters and hens in perfect matched pairs. 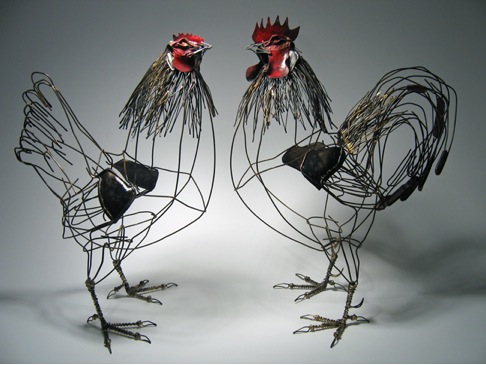 I like this ugly / beautiful axis, and have also made a number of insect pieces which have a similar feel. 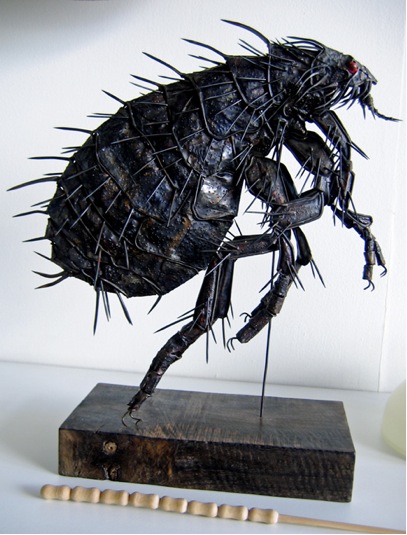 One of the things that I can imply in sculptural pieces which Muybridge was less able to convey is speed. I’ve experimented, especially in my ostrich pieces with spacing and overlapping … the denser the placement the faster the implied movement, the more spaced out the slower. I’ve always been more drawn to the long legged birds, cranes, herons, ostriches etc. I like the feeling of a body precariously balanced, then forcefully propelled forward, sometimes partially airborne, sometimes touching one toe on the ground 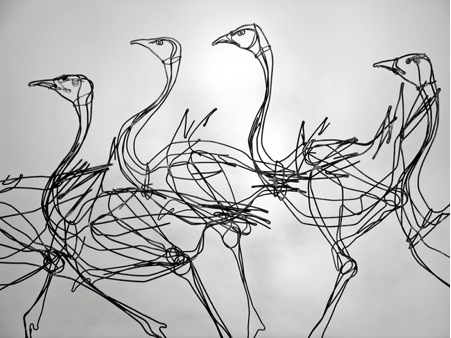 Your early training was in jewellery. When did you go big?

I studied Jewellery at Middlesex University in London in the late 80’s early
90’s. at that time the program was very much focused on large scale, body related sculpture type work. The faculty included Julia Manheim, Pierre Degen and Caroline Broadhead, so that, while we did have to learn traditional bench technique, the real focus was on alternative materials, appropriateness of materials and making, a personal exploration of form and ideas. I did make some jewellery and continue to produce jewellery on occasion.

The first of your work I saw was a Blue Bird with Orange beak, made of wood, recycled timber, stencilled enamel paint, ink, brass, and steel. He is so quirky. How did you come to this series?

For years now I’ve been making what I call “Bound Wire Birds”, a dense wire body with a carved wood beak, gestural and fun and using poses from drawn studies in a freer kind of way. 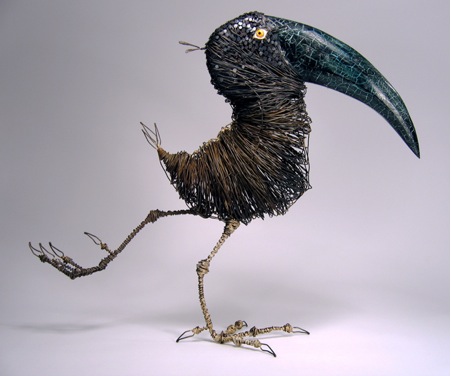 More recently these have developed into a body of work making carved wood pieces. Having worked in black so much it’s been fantastic to use colour! 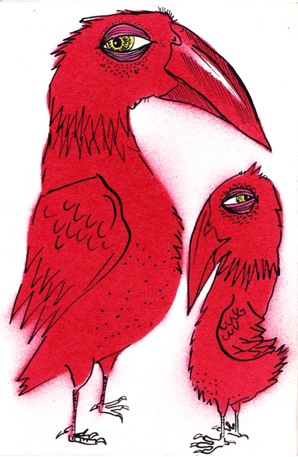 Can you tell about your birds eyes, they seem to watch the viewer so intently?

So much is conveyed by gesture … in humans as well as animals. The turn of the head and the sudden beady eyed look can speak a thousand words! 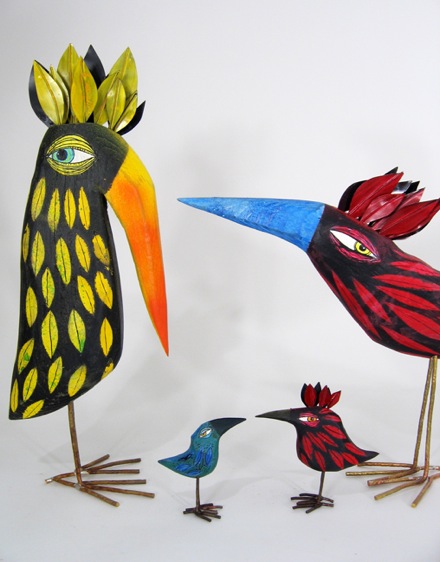 You also do animals from life drawings can you elaborate on this? 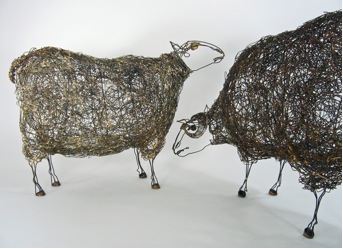 I do make other animals, but am always drawn back to birds as my primary inspiration. 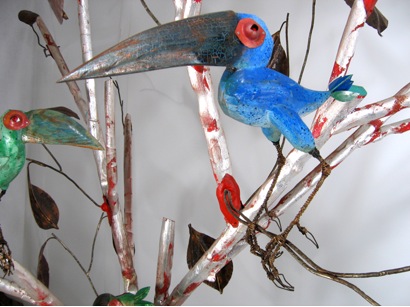 “Birds In A Tree”

Tell us about your studio space?

I have a pretty large studio in the basement of the building I live in. It opens out onto the garden and I have a commute of about 1 minute! I don’t share my studio with any other artists, but I do have two dogs who mostly hang out with me at work, unless it’s sunny in the back yard in which case it’s full on canine sunbathing …

I’m currently working on a commission of 20 or so birds for a private residence. 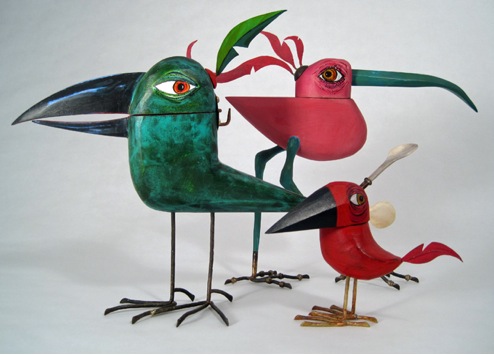 Earlier in the year I made a group of 15 carved wood salt cellars in the form of birds so it’s a nice change to be back working with wire again. 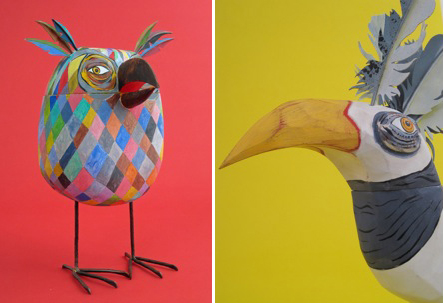