Sylvain Guenot is fascinated by faces. He captures the portrait, seeing his portraits as ‘peoplescapes’ wanting the environment and other people to become a part of the portrait.

“Photographers should stop thinking about their camera and only concentrate on what they see in their viewfinder, it is what one puts in it that comes in the picture…, probably my best advice” Sylvain Guenot

Zoneone Arts is delighted to bring Sylvain Guenot to you… 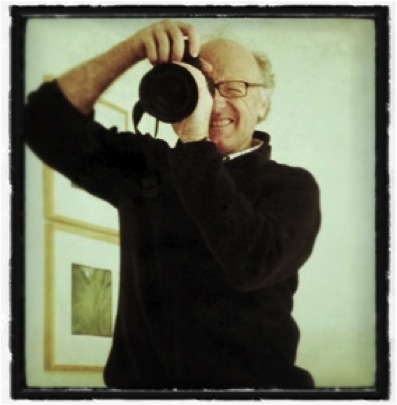 What are some important things that you need to go through with the sitter to get the best results?

I spend quite a lot of time with the sitter(s) before the actual start of the shoot. First I show them samples of my work to remind them the specific nature of my portraiture so that they “understand” what I expect of them. Then they show me round inside and outside the house so that I can spot the places with potential. Finally we choose together the clothes to be used to match best the various places. This is a very intimate time to build up the necessary confidence needed for a successful shoot: intimacy between photographer and sitter is a key thing in my experience.

Of course you also work in colour, can you discuss why colour is important for these prints? 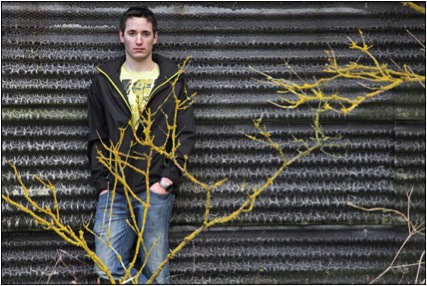 In both these photos the link between sitter and surroundings is made by colour mainly, in these two cases black and white would have diminished the impact rather than enhance it. In quite a few of my colour photos the main feel remains monochromatic, sometimes there is somewhere in the picture a little splash of brighter colour 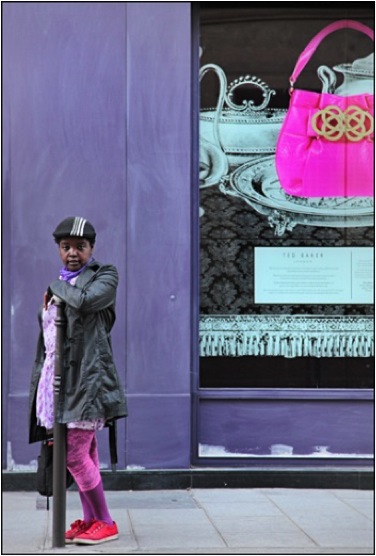 I actually mainly work in colour nowadays although I do think monochrome extends the artistic dimension of an image providing it is the right type of image. Some images have to be colour otherwise they become pointless.

Composition is a very important part of you photography, can you expand on this aspect?

Yes, composition is essential in my images: there is actually a lot of geometrical shapes involved whether they are around the sitter or the sitter. My aim is to make them talk together in an harmonious way to produce a successful image. To do that, at the composition stage in my viewfinder, I consider the sitter (actually the space he/she occupies) as an abstract shape taking no more importance than everything else around background and foreground. I regard the whole thing as an abstraction of the reality which I then photograph. The image comes out of it where the sitter and the rest cannot be visually dissociated they are bits of the same working machine. 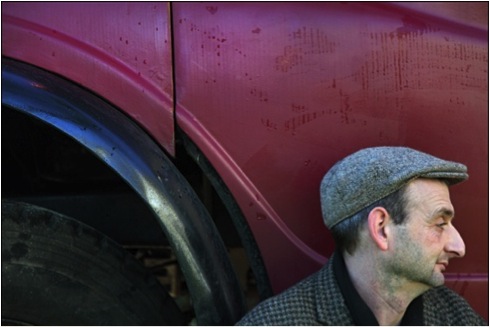 Can you discuss the sitter’s reaction on seeing the final image?

Sometimes some of them who have not fully “understood” my approach might tend to only look at themselves not being able to take the whole thing in one go, so it can disturb them a little bit…. 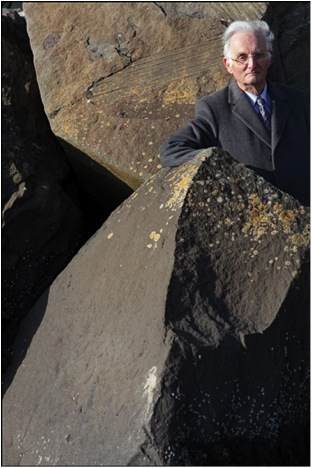 This is Sir John Houghton, he is a scientist who received a joint Nobel Peace Prize in 2007 for his team work with Al Gore about climate. This portrait was commissioned by a publisher for the front cover of his biography which is coming out in September 2013. The brief was to illustrate the “Conflict” our planet is facing through the voice and work of this highly respected scientist. Again use of foreground and background.

What do you mean by the word “peoplescapes”?

This is what I call “peoplescape” a word I feel I have invented but probably already existed before… I mean an image which contains a person or more than one but which goes beyond showing that person. It is an artistically pleasing image altogether which creates an emotion. Being supported by somebody’ s presence in association with abstracted surroundings suggesting (often in a subliminal way) rather than informing in a ‘documentary” way 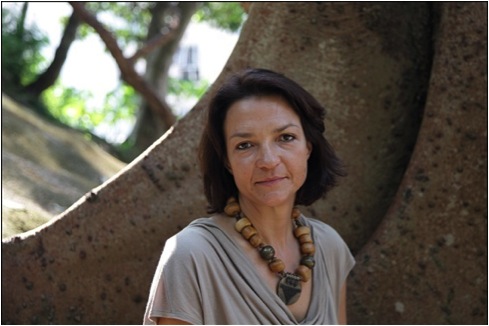 You see beyond the image and want to capture the character, can you expand on this?

Yes, the particular use of background/foreground I make, inevitably (and intentionally), reveals character in a subtle, non explicit way which makes the portrait more appealing and more interesting. I feel each image has a psychology and I try to use it to serve the sitter’s character in the image. 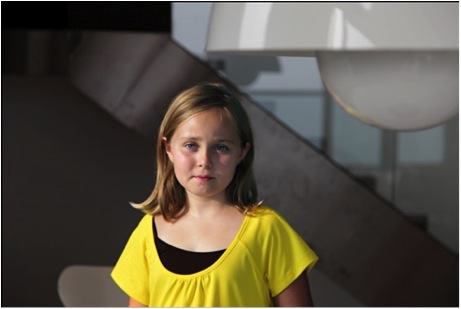 Here the surroundings are made of a foreground on top right corner (lampshade) echoing shape wise with the yellow collar of the shirt but also merging with metal staircase and windows in the background to produce a kind of disturbing/distressing feel which serves character for this young Danish expat girl in Hong Kong. 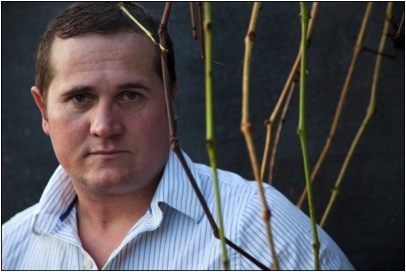 This man is an English high level cage fighter, I am aiming at showing his strength and also vulnerability, first layer of fragile green twigs acting as a foreground and second one as background, together suggesting subtlely the cage he fights in. Note how the shapes of the twigs replicate those of the shirt and therefore assemble sitter and surroundings in one working image.

You also use light in your work? 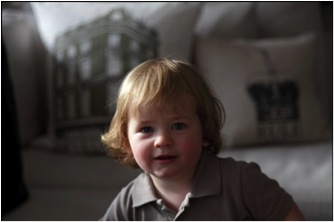 The combination of the strong side light with the settee designed cushions create an appropriate Dickens type of atmosphere to portray that little rascal.

Your major work is portraiture. You have also completed “The Hong Kong project” – can you discuss this project? 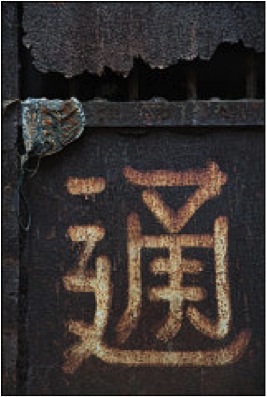 I took these photos on my numerous trips in Hong Kong between portrait commissions, I was fascinated by these derelict walls whose natural abstract patterns tend to evoke an infinity of concrete things depending on the way your mind decides to look at them. Interestingly enough the photographic process there was to transform abstract forms into more real looking ones as opposed to the “peoplescapes” which are about abstracting real things. Both processes complete each other and require the same artistic vision and abilities.

Do you have other projects that you are working on or have done?

I currently have an exhibition of portraits of famous American Contemporary Dance dancers in New York and I love the idea of doing a similar thing with UK dancers at The National Portrait Gallery in London but I will have to convince NPG first….The NYC exhibition is called “inAction, The Virtuosity Of Presence”, my challenge was to show the virtuosity of the dancer through a “portrait” where this dancer is not dressed as a dancer, not performing, not even in a dance environment. 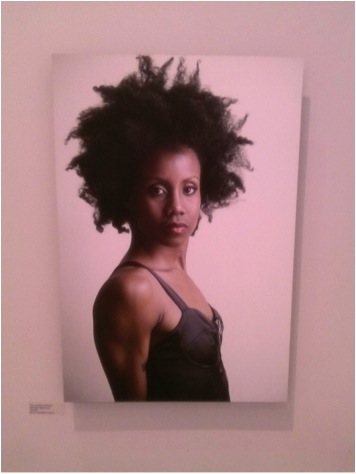 I am also in the middle of setting up a commercial project consisting in getting Asian people to come and have their wedding (or rather pre-wedding) photos taken in England and France. A coffee table book of portraits of famous people around the world is also in the pipeline, it is too early at this stage to reveal more about the project.

How has photography changed for you since digital and software such as Photoshop?

It has changed dramatically and for the better: first I was very reluctant to leave my film camera as I was convinced digital technology would never enable me to produce such good black and white, black and white being the only way for me…. Not only it did a very good job in that respect but it also gave me a chance to discover colour and find myself loving it to a point I nearly only produce colour work nowadays. I actually find it difficult to convert colour digital files into black and white when I previously photographed the scene with colour in mind. Also digital technology has enabled me to take more work on as it makes it possible to work much faster and more efficiently than in the darkroom. Finally I love the control on the image you get through Photoshop or any other software of that kind.

How large can you have you prints processed?

I always do my own printing because I want to keep control of the image until the final stage, interpreting my digital file in a similar way I used to with my negative in the darkroom. My Epson 3880 printer allows me to print up to A2 (60.5 cm x 43 cm). Much larger prints can very easily be achieved with my high resolution files (Canon 5D Camera)

Can you explain to the reader that as a professional you don’t expect to get that one image with one photograph and it isn’t simply a case of being a professional, you too need to take many to capture the perfect image? Discuss?

Absolutely right! First I need to find the idea which means the right place in the right light with the sitter wearing the right clothes. With the experience I have become good at working out quite quickly (sometimes a bit instinctively) which combination of these elements would have the potential for a successful image. Then it is a question of trying it and sometimes it can take many shots indeed to get the one(s) providing the expected pleasing result. I would advise to always work with an idea in mind, working randomly is rarely fruitful.