Susan McMinn, Bendigo, AustraliaMy PhD research was around the horse in war during the Palestine Campaigns of WW1. After researching stories about the Australian war horses concerning their plight during this campaign in the WW1 Light Horse Soldiers diaries, particularly that of Ion Idriess’, and various artworks including paintings by Australian War Artist George Lambert, I realised that I needed to go to Israel to look at and experience the Anzac trails and the landscape in which the horses travelled.Zoneone Arts brings Susan McMinn to you… 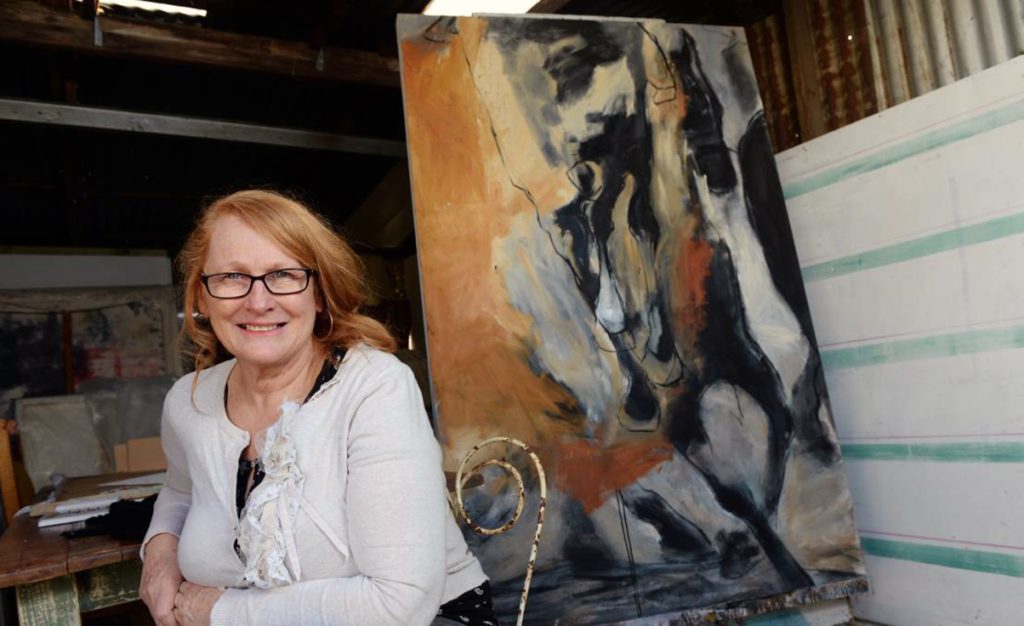 Explain how you managed to link your PhD to a visit to Israel?

My PhD research was around the horse in war during the Palestine Campaigns of WW1.  After researching stories about the Australian war horses concerning their plight during this campaign in the WW1 Light Horse Soldiers diaries, particularly that of  Ion Idriess’, and various artworks including paintings by Australian War Artist George Lambert, I realised that I needed to go to Israel to look at and experience the Anzac trails and the landscape in which the horses travelled to understand the topography and hues of the land.  Visiting Israel led to an understanding of the land – through creating many small watercolour studies which was important in the development of my paintings.

When did you first become aware of George Lambert?

I became aware of George Lambert and his work during my PhD whilst researching at the Australian War Memorial.  I was interested in the way in which he portrayed the animal in war and his use of colour. I was also drawn to investigating his work as a point of reference to the detailed stories found in the diaries. They gave me a visual compass if you like in understanding where the horses travelled. 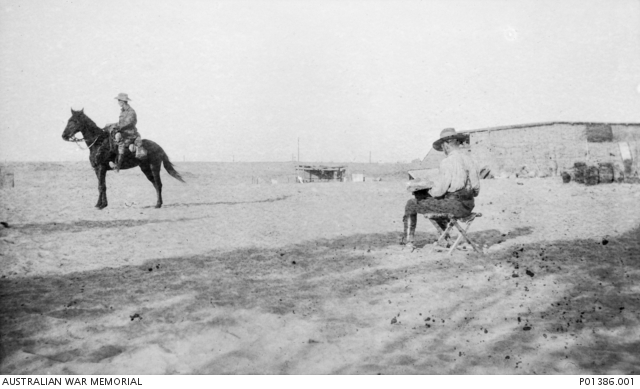 George Lambert work as a war artist in WW1

Explain a little about George Lambert as a War Artist?

George Lambert and Septimus Power, whose work I also looked at during my studies were both chosen as war artists during WW1. Whilst Power was sent to the Western Front, Lambert was send to Middle East.  During this time, Lambert used a visual diary to create small studies of landscapes and figures and animals, from which he created his paintings.  He was very concerned with the colours of desert landscape, obvious in his statement regarding the colour of the land, although it could sound outdated, still rings true today. He stated:

A word to those who would paint this country. Leave your gay pigments at home. Approach nature with a simple palette but an extravagant love of form. The sand hills take on shapes and curves, cuts, concave, convex, in an entrancing pattern, interwoven sometimes here sometimes there jagged eccentrically opposed. 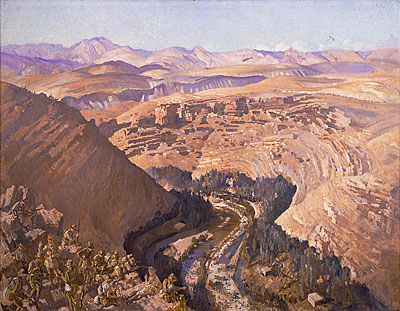 My most favourite part about Lambert was that he rode a horse around the country of Israel and arrived at the scene he would paint some weeks after the incident had occurred. 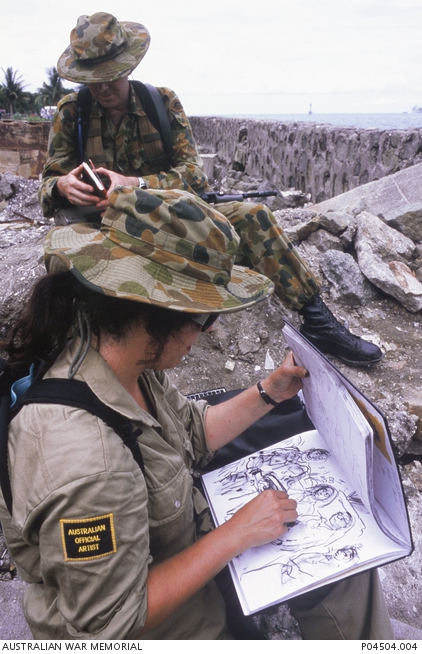 Current War artists such as Wendy Sharpe and Ben Quilty engage with the soldiers and personnel and perhaps understand the war experience to a greater extend.  Their portrayals of war are different in that Wendy Sharpes work created in East Timor captures what she experienced, much like a diary entry.

Whereas  as Ben Quilties recent exhibition ‘Ben Quilty: After Afghanistan’reaches into the human experience and the absolute gut- wrenching emotions of war. 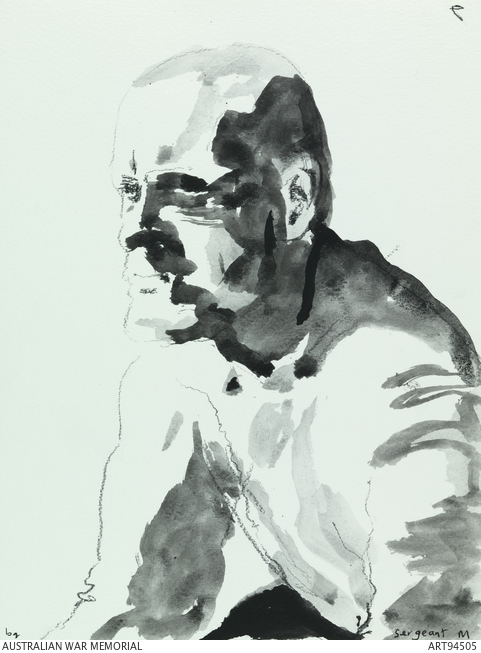 However, artworks by the earlier war artists such as such as Lambert and Power typically represent the harsh war-torn landscape, whilst Ivor Heles work conveys the human struggle.

Discuss George Lambert’s most recognizable WW1 war portrait, ‘A Sergeant of the Light and how it has effected your work? 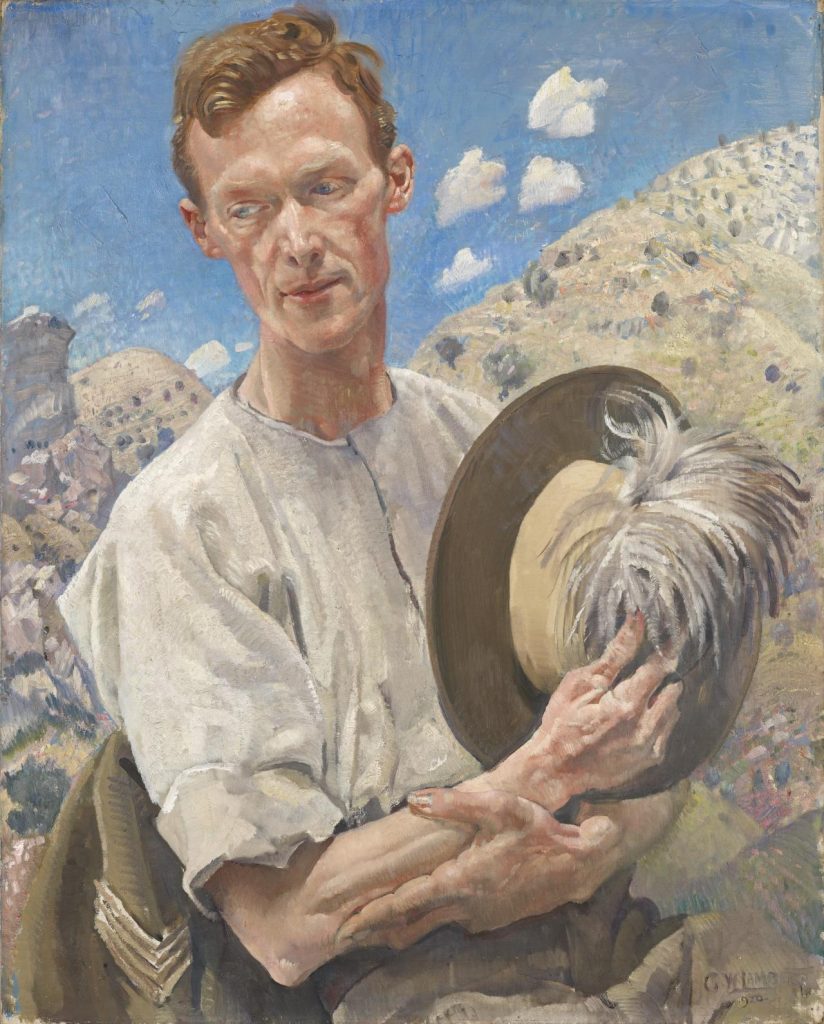 George Lambert, A Sergeant of the Light

My work was based on the Australian horse in war and not so much on the human entity.  I try to convey in my work the body language of the horse under war conditions. Because of this I looked at the landscape and the animals that Lambert painted rather than his portraits.

Discuss the landscape of George Lambert Palestine paintings and what you found when you retraced his steps.

The colours Lambert used in his paintings are reflective of the colour of the landscape in Israel.  One of the most significant things that the horses and soldiers battled during this campaign was the sand from the Sinai landscape.  They often complained of the sand blazing into their eyes.  Lamberts work captures this sand in the hazy mauves and muted tones in his paintings. There is a profound contrast between the beauty of the land and its colours, and the harshness of the elements, something which Lambert captures. His impressions of the horse and dead animals are also very poignant.  One particular painting Tel El Saba, conveys dead camels and horses, which demonstrates the distorted shape and form shape and form of the carcass. I travelled to Tel El Saba and found the location recognisable because of this painting.

Explain the value of retracing another artist with your own impressions and paintings?

I travelled to Israel after I had studied the diaries and lamberts paintings.  I found that I needed to then actually look at the landscape myself.  I was very surprised that some of the Landscape that Lambert had painted was identifiable. I made a lot of watercolour sketches and then when I returned back to my studio in Australia, I completed a series of landscape paintings whilst the colours of the landscape were still visible in my mind. When you are studying and painting a period of history all you have to rely on are the Archival and personal stories, past artworks and photographs.

Can you discuss the honour of your upcoming Exhibition, Battle of Beersheba, Historical Memorabilia and Contemporary Artwork?

I am very thrilled to have my work exhibited alongside that of Sidney Nolan and George Lambert. Especially since I have studied their work in relation to my PhD studies.  I also studied Chauvel’s letters to his wife which I found very moving.  I feel very honoured to be part of this exhibition.

What does it feel like to be exhibition with such renowned Australian Artists?

It is amazing.  It is like my PhD research is on display at the Shrine, having studies each of the artists works and the letters written by Chauvel.

When did you first start of paint horses?

I started painting the horse during third year of my fine arts degree at La Trobe University. During this time my paintings investigated the charge of Beersheba.  As I was an avid horsewoman I used my understanding of the shape and form of the horse to create works.  I also went to a small farm in Bendigo and drew horses onsite within their environment.

Expand on your word, ‘Horstory’?

The term Horstory is a play on the words horse, narrative and history.

Can you expand on your 2009 animation, ‘The Last War Horse’?

My work was very focused on movement and I was fortunate to win an animation bursary to create a three minute hand drawn animation. This work loosely reflects the following: 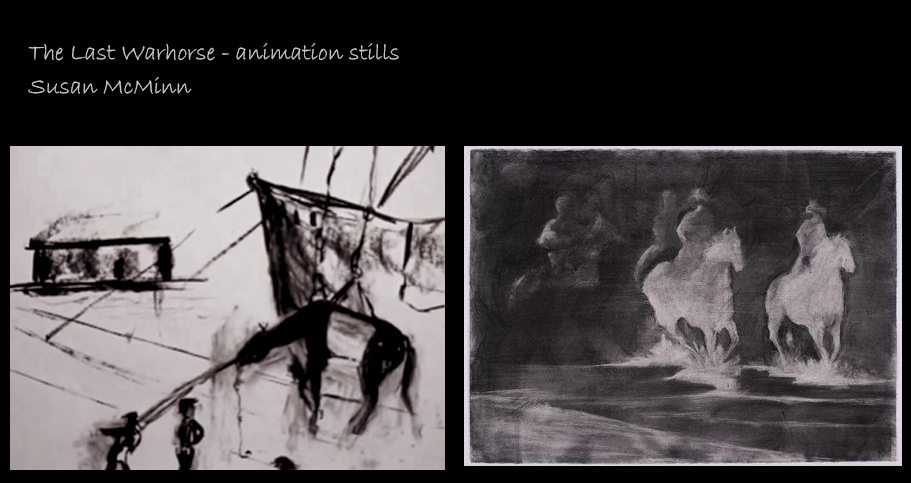 During the Palestine Campaigns of WW1, Australia sent approximately 130,000 horses to the Middle East. During war service these horses suffered night treks of up to 90 miles at a time, carried weights beyond their normal capacity, died of exhaustion, suffered thirst and hunger, were shot, blown up and finally the remaining horses were left in the Middle East at wars end. Companion, Soldier, animal in service. The Australian horse is ‘The Last Warhorse’, depicted in this three minute charcoal hand drawn video.

The Last Warhorse won the best Australian Student film at the Australian International animation festival and was the only student film shown during the WIFT (women in film and television screening) and can be seen in the permanent collection of the Melbourne Shrine of Remembrance.

What lead you to do your PhD in Fine Arts?

I started studying art later in life in my early 40’s.  I completed my degree with honours and decided to go onto study a Master’s degree focusing on the horse during WW1.  On advice from my then supervisors and I upgraded to a PhD due to the sheer volume of work and research that this subject matter generated. 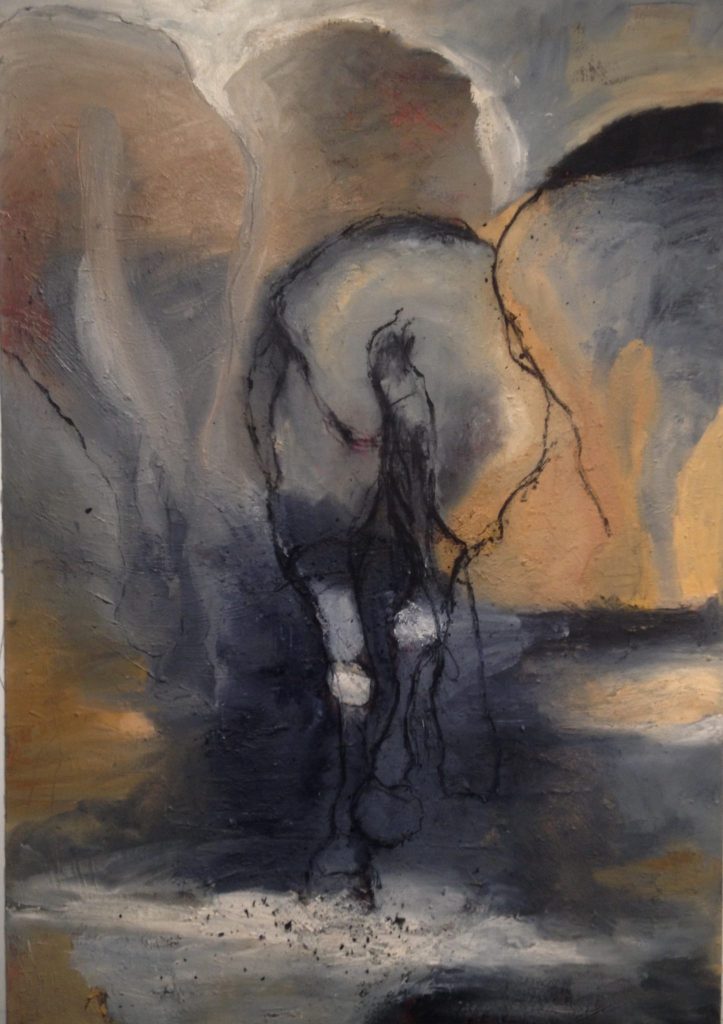 You use colour very strongly, and in relation to the environment, discuss.

The colour I use is representational of not only the land where the horses travelled but also where they fought and died.  In addition, the paint and materials including sand are thickly layered. It was as if, during the painting process painting, that I subconsciously released the horses back into the landscape by etching their form into the rich textures and tone.

Does living in the country strongly effect your art and the themes you work on?

I now live in Bendigo however I grew up in the small dairy farming area of Ballendella, 1 hour north of Bendigo. It wasn’t always easy.  I guess growing up in the country effects my art in that I am fairly pragmatic and I have a very strong work ethic.  Therefore, I am attracted to themes that are tangible and possibly connect with Australians who have endured difficulty to some degree.  My relationship with the horse certainly incited an interest in the story of the Australian horses that went to war.  I used to ride my horse to my friend Kathy’s house on the weekends some ten miles away from my home, and I often recalled this experience when I read about the horses carrying the soldiers for miles as they travelled through the night in Palestine. 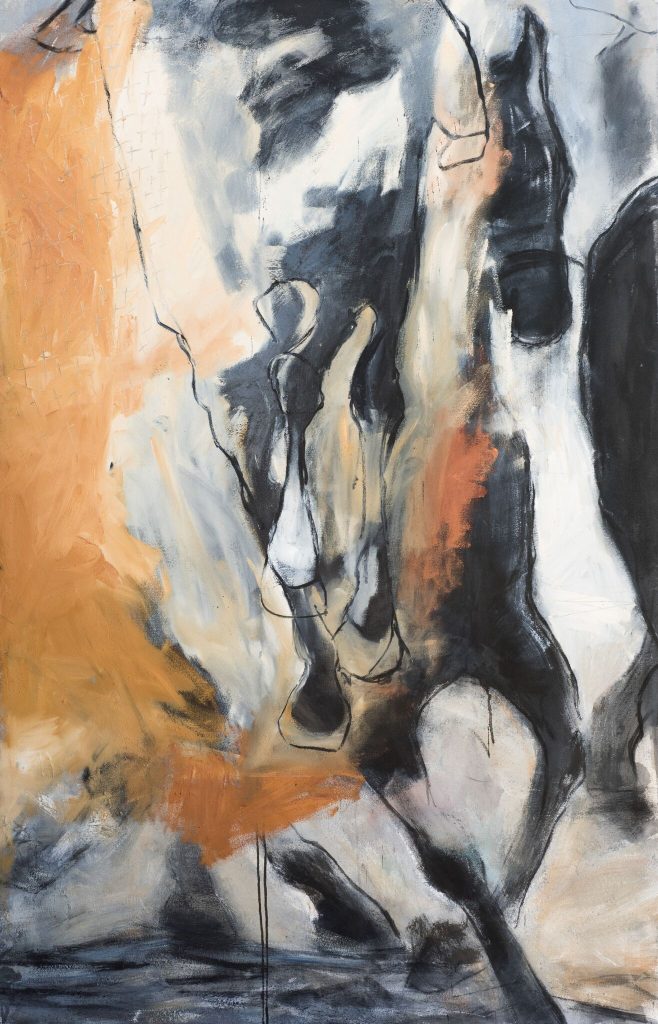 Discuss some or your other current art work?

My current work involves explorations into technology and the use of digital technology, word and painting.  I have been completing digital paintings that relate to one word.  They are lots of fun and the colour is very vibrant when printed.

I will also be undergoing a new project with the Bendigo RSL.  I will be researching the Victoria collection and looking at notions surrounding the war vets and families return from war.

I will create a body of work that will be exhibited at the new Bendigo RSL Museum Gallery in 2019. 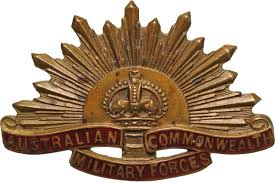