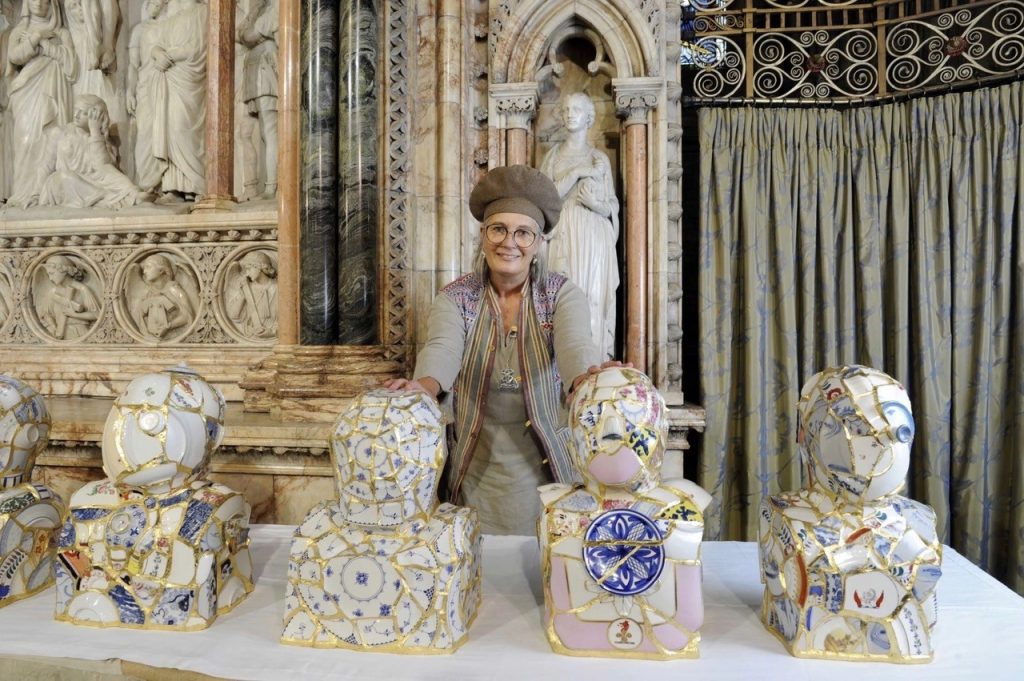 How did this work come into life? The concept was born after my studio was flooded by heavy rain. When clearing it out, I found several pulpy cardboard boxes of broken china in a soggy corner. They had been kept, along with other broken and useless belongings, as an ever-growing collection for a  potential project – a consequence of my hatred of throwing things away. How did these previously loved broken objects end up in this box? The unintentional act of breaking china is violent and generally rather alarming. Chucking out  your grandmother’s tea pot or a wedding present immediately post-breakage is sometimes just too emotional. I have subsequently found out that I am not alone when it comes to keeping broken china. Much of the material used in this installation has been gifted to me by kind and thoughtful friends. No plate or cup was intentionally broken for this artwork. 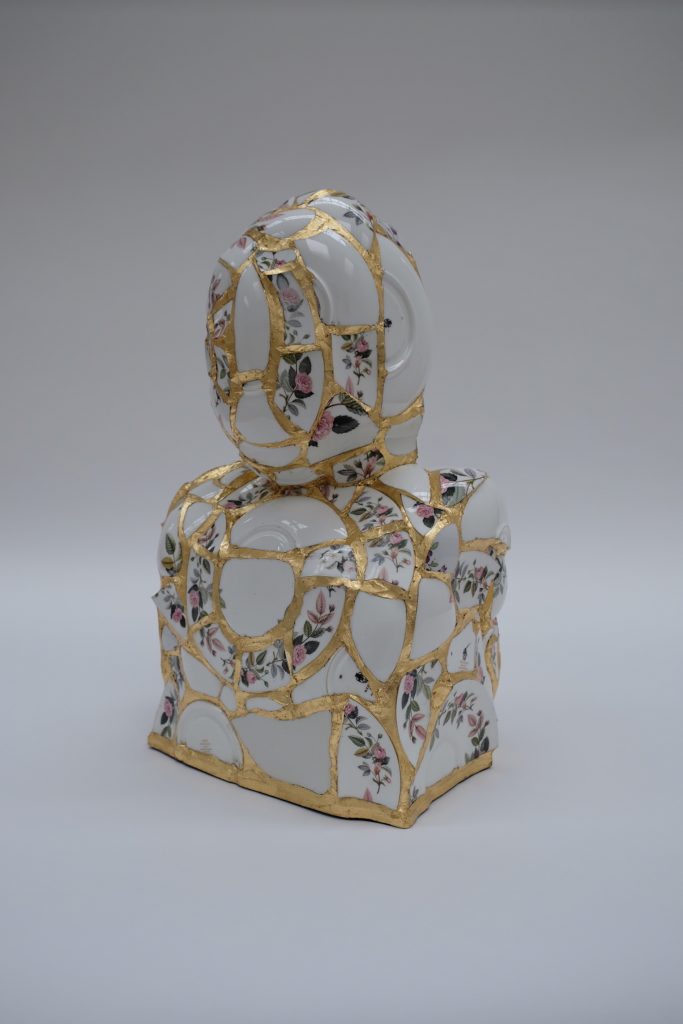 This sculptural series evolved from a play on words and a speculation into what was the  last meal served upon the plates and china? There is also a word play between ‘bust’ – the heads and ‘bust’ – the china, as well as the physical and emotional meaning of being ‘broken’.

Did it have a space to be exhibited before commencement or after it was begun?

No. The concept came to me and by the time I had made three busts I felt able to make a proposal to a gallery with the intention of finishing the piece. I made a proposal to HIX Gallery in Shoreditch, London (underneath and associated with a restaurant called the Tramshed) in September 2018 and showed it at Easter 2019. 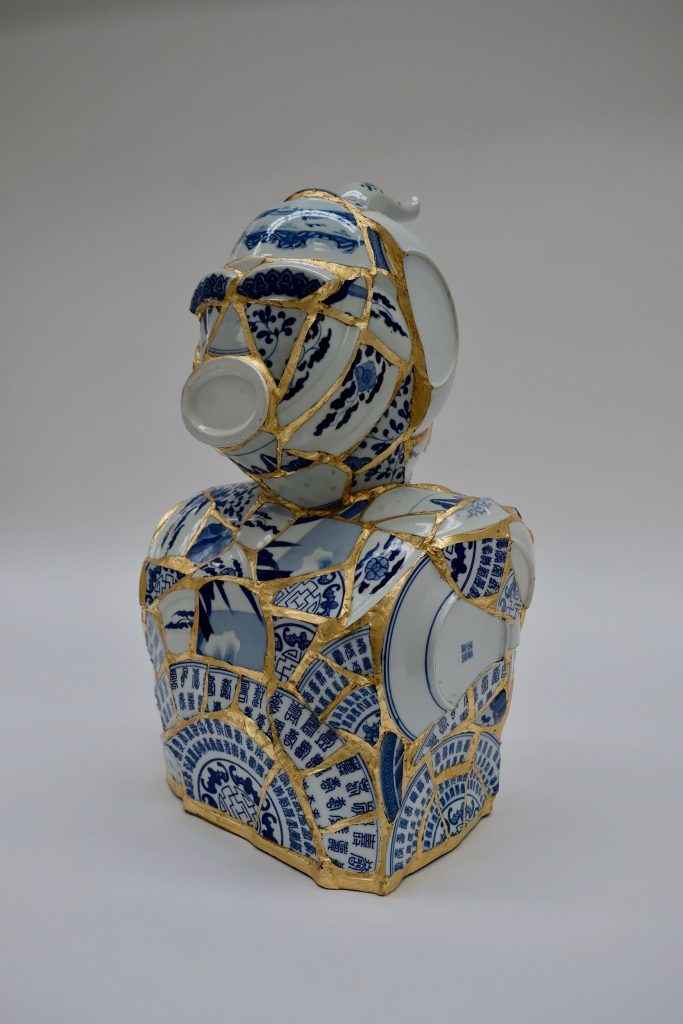 Can you explain ‘wabisabi’ – and “kintsugi’ and how you have adapted this Japanese technique to this work?

*Wabi-sabi: In traditional Japanese aesthetics, wabi-sabi (侘寂) is a view centred on the acceptance of transience and imperfection. The aesthetic is sometimes described as one of beauty that is “imperfect, impermanent, and incomplete”
*Kintsugi (金継ぎ, “golden joinery”), also known as Kintsukuroi (金繕い, “golden repair”) is the Japanese art of repairing broken pottery with lacquer mixed with powdered gold, silver, or platinum. As a philosophy, it is similar to that of wabi-sabi: it treats breakage and repair as part of the history of an object,

In making this piece I have been inspired by the technique of Kintsugi but I have adapted it for my own purpose. Whilst not actually mending something , I am constructing with broken china. The joins therefore have to be larger and stronger in order to make a robust sculpture. I smoothed  and sanded the joins before applying about 4 layers of gold leaf on them. This was possibly the most time consuming and fiddly aspect of the build. 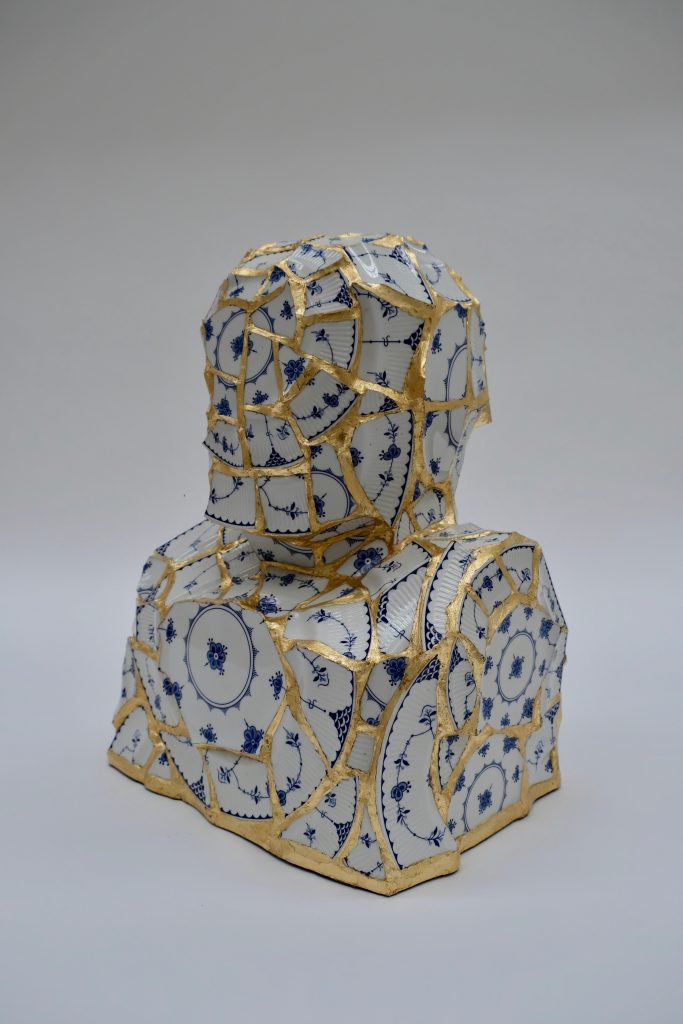 How are the busts constructed beneath the ceramic pieces?

The busts are hollow. I made an armature with a wooden upright and base and then wrapped tightly scrumpled newspaper around the upright   binding it with string and tape until I had a basic head and shoulder form. Each bust is slightly different in shape and size. It was a case of “hoping for the best” in terms of construction. I couldn’t map out the pieces before gluing together. It was more of a piece by piece process, a 3D jigsaw.  Starting at the front and working up and around to the sides. Then the back and working up until the pieces met in the middle. I then peeled away front and back from the armature and joined them together.  The busts have wooden bases.

They are hollow but they contain  quite a lot of  my DNA. 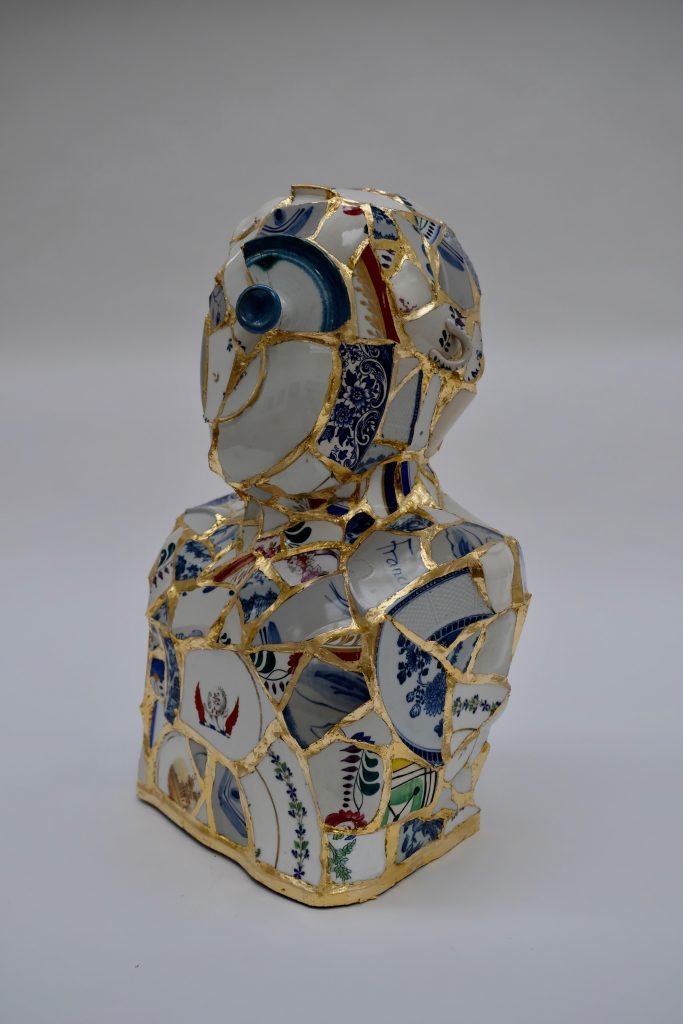 Has the work grown a life of its own?

Yes! It has grown bigger than me. It is almost like I have turned from the maker to the custodian of the piece. I am being advised kind and concerned people, who feel a sense of responsibility, telling me what I have to do with it in the future. “It must travel” “It needs to be bought for the Nation” “It should do a Cathedral tour” The latter words of advice are currently my wish too but I don’t know where it will go from here. 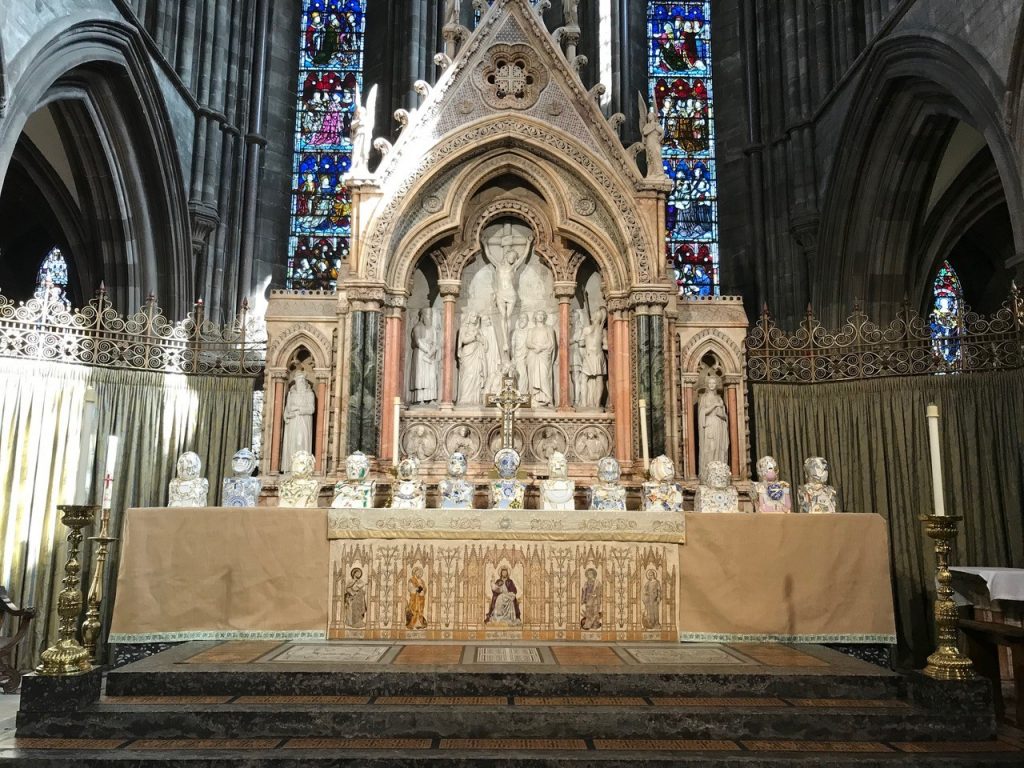 Obsolete, doesn’t appear to be in your vocabulary – discuss.

I have used it in a few essays and interviews! But maybe it is not on my website. It is deffo a word I use!

Here is an excerpt from one of my brief essays on the materials I use.

‘I am preoccupied with objects that have seemingly ceased to function, rendered obsolete for whatever their original intended purpose by their age or physical state; I like to see the potential where others may not. Interested in the history of an object, I question functionality and attachment. I play with associative words and meanings to help inform my end work.’

You have expanded beyond the 3D form to studies of the twelve busts expand on using both 2D and 3D in this project.

I studied fine art (painting) at Art School (Camberwell-London) and have always been a painter and observer. Whilst my preoccupation with other materials has led me to more conceptual and sculptural pieces, drawing and observation have never been far away.

Once the busts of The Last Supper had been made, I wanted to concentrate on meaning of the cracks/ joins that inform the piece.  I made a portrait of each bust on A2 handmade paper , taking away the broken china element and portraying the busts as  3D skeletal systems.

Also , whilst invigilating  at the Cathedral, during quiet spells, I have been drawing studies of ‘The Last Supper’  in its ecclesiastical  setting. More as a note taking and observational exercise but maybe with a view of painting a series of the Last Supper in its future settings too. A collection of “Altared images” 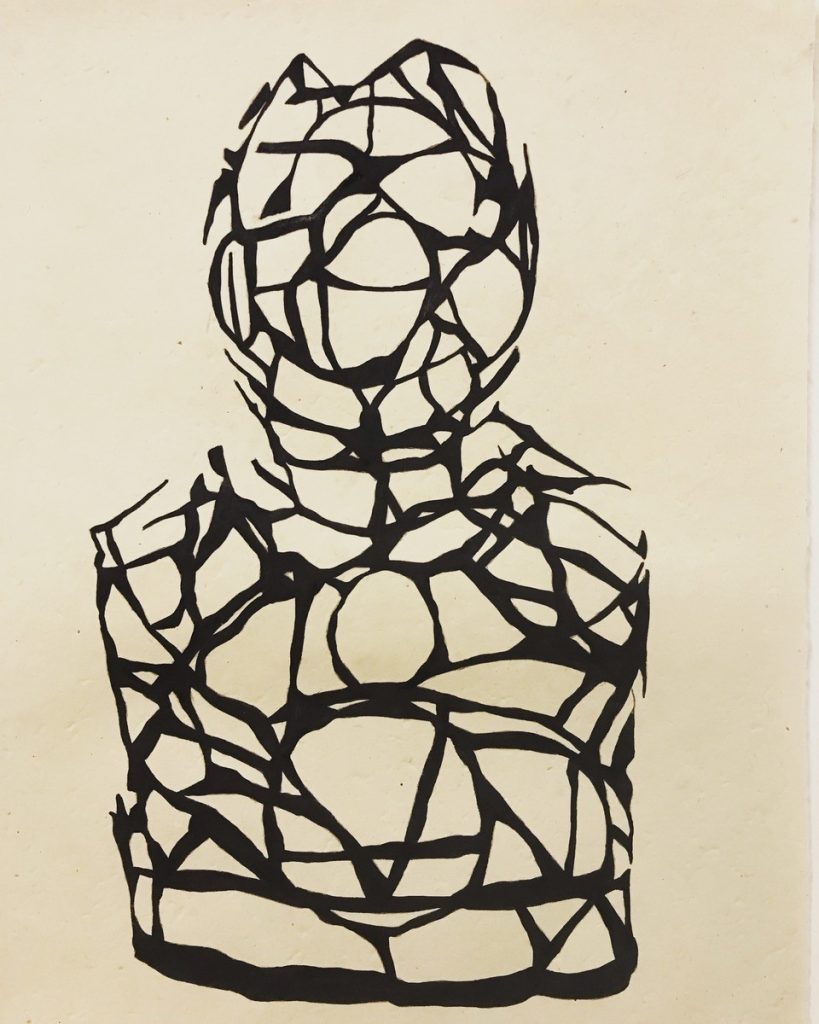 Tell us about having the work in St Mary’s Cathedral in Edinburgh?

There was a very brief spell between finishing the piece and taking it to London for the Exhibition at HIX Gallery. I had an impromptu studio opening where local friends and family could come along for a preview.  A Reverend friend in her late 80’s became very passionate about the piece and subsequently bombarded me with emails with contacts in the church. She gave me the contacts for St Mary’s Cathedral and after my London Show had finished, I contacted them. They were very open to the idea, and we had a meeting to discuss it further. I took Jesus along in the passenger seat of my car for the meeting… I thought he may help! (to show the scale and the finish!)

Exhibiting at St Mary’s during the Edinburgh Festival has been amazing. The Cathedral opens its doors for concerts, organ recitals and choral evensongs of world class quality. The building feels alive and vital and welcoming. 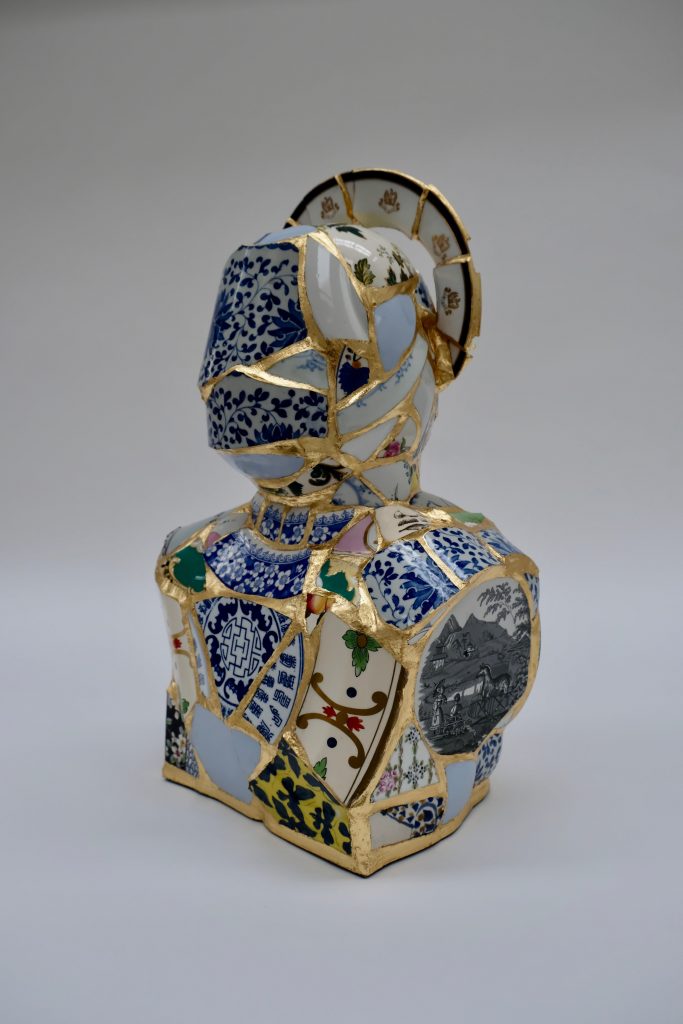 During the time you were also at the cathedral you spoke to many observing the work.  Please share some of the highlights.

The response during my 10 days in residence in St Mary’s Cathedral has been extraordinary. Raising philosophical discussions, biblical references, recitals of French poetry, (Jacques Prévert “La Cén”) issues to do with mental health. Their observations and responses have often informed me about aspects of the work or references that I had not yet been aware of. 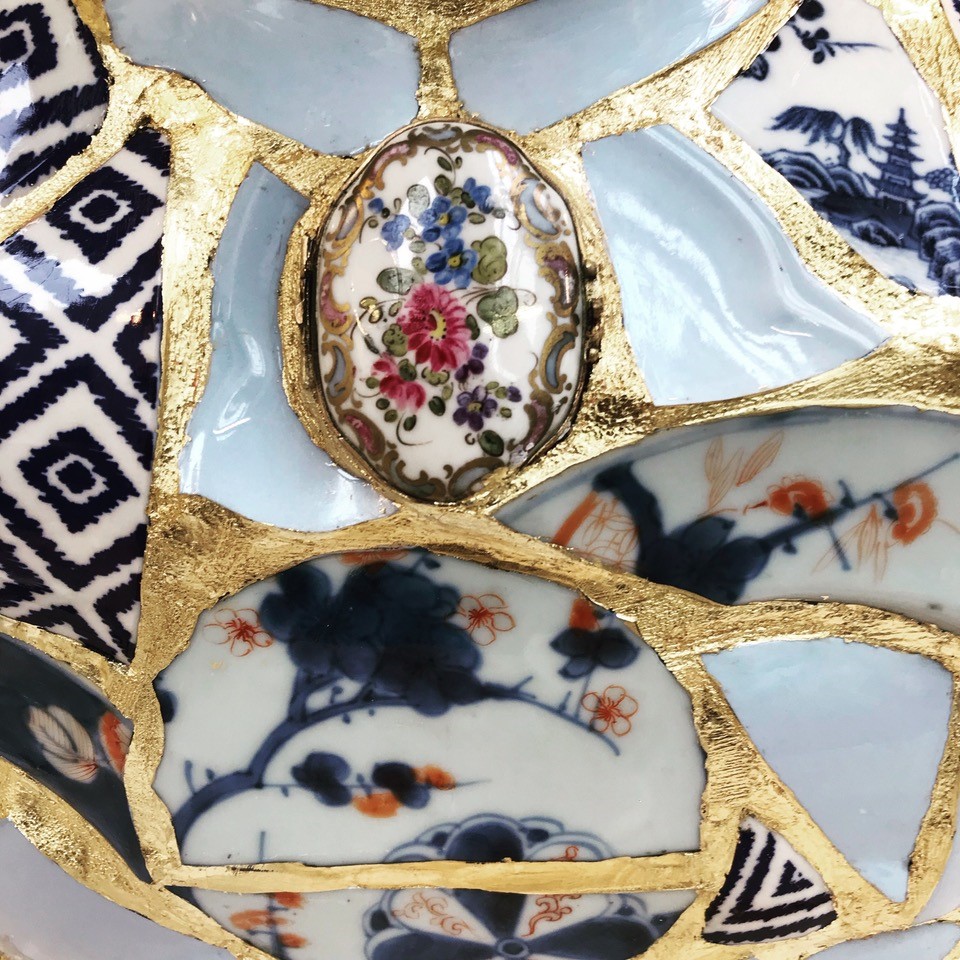 Comments to me like ‘You can see that it has been made with love” “You can see the respect for the materials” “It is God’s work” as if I were not actually a part of it. All unbelievably positive and affirming.  A few of the visitors have been wept. Lots of physical responses to the piece like goosebumps and  then associative memories when someone spots a piece of familiar china. I have had visitors coming back to view the Last supper multiple times. They have come as strangers but leave as friends.

The Vice Provost,  Rev Marion Chatterley   has written a sermon about the piece for her Sunday service  as has the Dean of the Diocese of Edinburgh. It has been humbling and slightly surreal!! 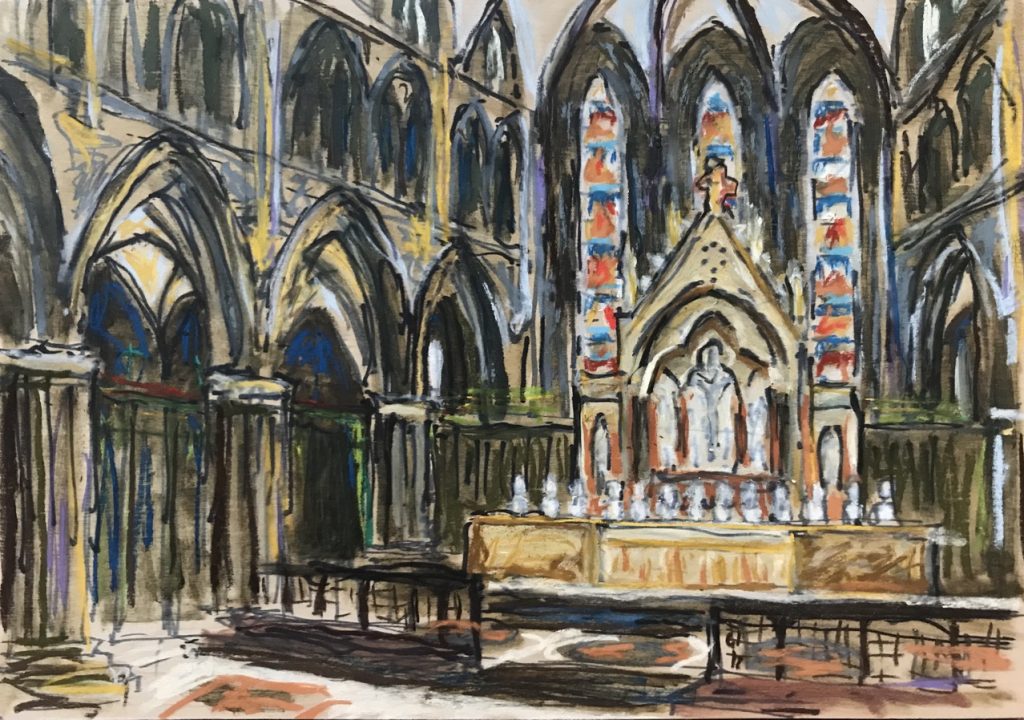 You have taken the art of decommissioning even further and larger with the Memorial Garden using a decommissioned railway bridge expand on this commission.

In 2016 I had an exhibition at the Fine Art Society Edinburgh called “Another Man’s Treasure”.

A friend, neighbour and patron came to the show and whilst liking the pieces -he has several of my works on his walls- he wasn’t going to buy from the show but made a proposal instead.

He had a huge stack of sandstone on the bank of the river by his house. Stone that had formed a Victorian railway bridge spanning the river. The bridge had been demolished to make way for a modern one, and the sandstone slabs had been discarded-rendered obsolete. Could I use these huge stones to make a woodland memorial garden next to the parish church? It was a job beyond my capacity really, but I undertook to design this public space. My first problem was the term “Memorial Garden” .  I had envisaged a place that felt like an archaeological discovery, a place you came across in the woods, a sanctuary . I researched the landscape and discovered there had been a few Roman roads and settlements in the vicinity. The old bridge carried passengers from Dumfries to Glasgow. So with my Patron’s consent I referred to it as the “Journey Garden” and inscribed quotes, which had to be discovered, on the stones  “Look where you have been, view where you are at , seek where you want to be”  and made a labyrinth  on the centre stone. The garden is used for ceremonies, blessings, gatherings and performances as well as a place to sit quietly and reflect. 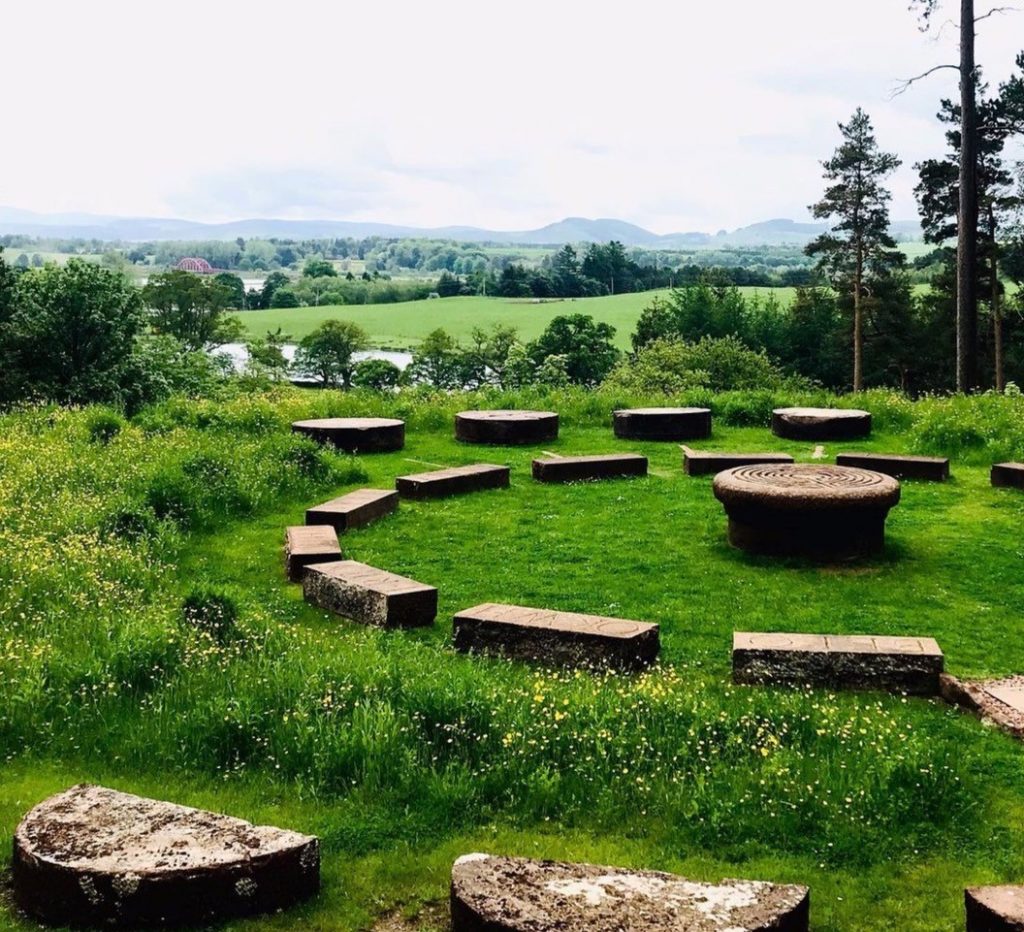 Another discarded objects you have use are feathers.  Comment on your work Wheels and Mandalas. My husband Ben was in the food business for 18 years. He sold beef, lamb and mutton from our farm in SW Scotland and collected game from around the region to sell to the restaurant trade. At one point the price of game was unbearably low and I felt that there seemed to be an injustice to the life of these beautiful birds.  I intercepted and plucked the pheasants  before they went to be processed for the food market. With these feathers I made art works. Nature is so very geometrical by design and I gravitated towards making Mandalas . This extended to bird skulls (another by product of the food industry.)  These , like much of my assemblage and sculptural  work , are a a kind of memento mori. Grouse Skull Mandala, By products of the food industry

My husband is no longer in the food industry, so I had to look elsewhere for inspiration. Tin Tup, Made from a demolished corrugated iron farm shed 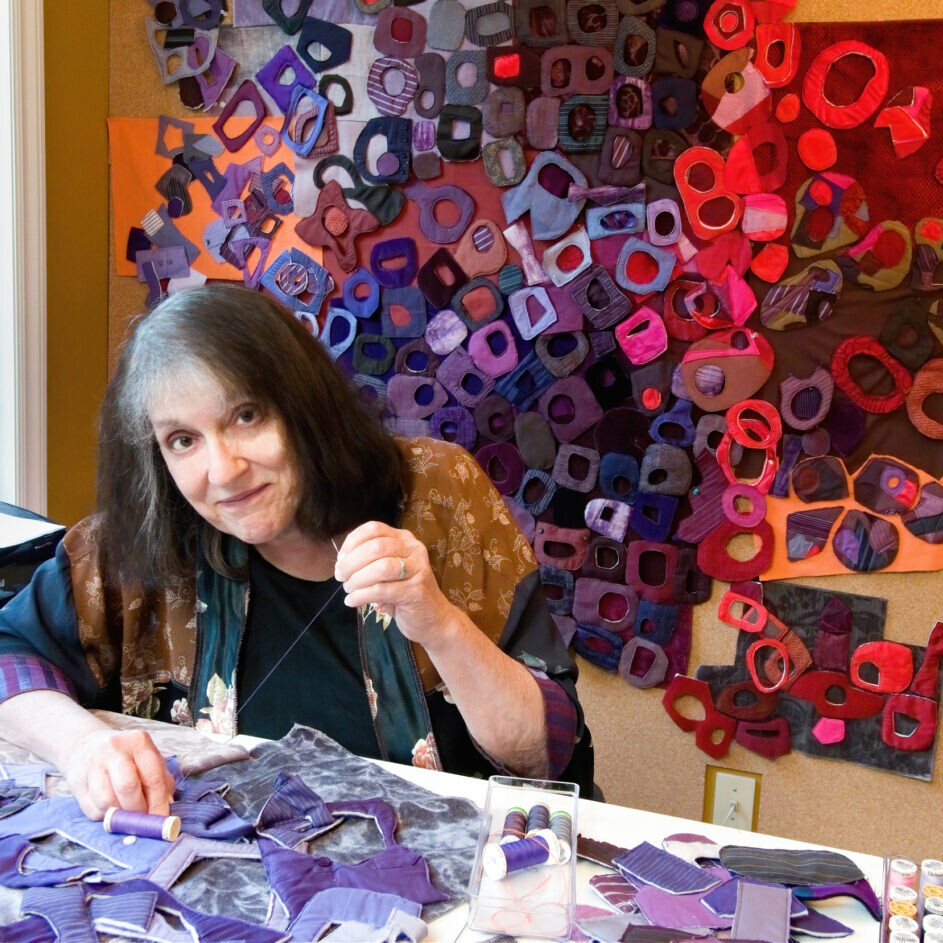