Zoneone Arts is delighted to bring Sandra Black to you… 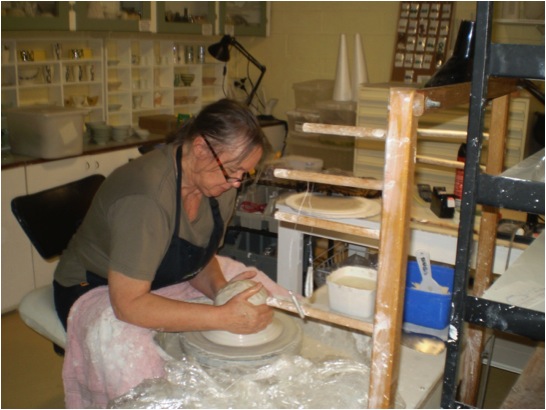 While writing this conversation you will be in China at a residency. Can you explain how this came to be and what you are learning now?

I am currently in Residence at “The Pottery workshop” in Jingdezhen, famous for its fine porcelain production. I was initially introduced to this residency by two Canadian artists Trudy Golley and her husband Paul Leathers. They persuaded me to do my first residency with them at the pottery workshop in 2010 after we had exhibited and worked together in Perth in 2009. As to learning I have come to the residency both the first time and now with an open mind and no particular plans. I have found in past residencies if one had a specific goal in mind it was often thwarted by technical issues with materials, kilns or distracted from by all the new possibilities new clays, tools, technologies , techniques and what other artists had to offer and be inspired by. I like to learn from my fellow artists and craftsmen around me through observation, conversation and practical demonstrations. Particularly important is to learn about the culture and history of the country I am in.

How important are residencies to your professional development?

Residencies are very important in that they give me time out from the normal home studio, work routine. They allow me to engage in new cultures explore new materials ideas etc. They allow time to reflect, relax and experiment. It also creates new friendships and connections which leads to further opportunities to exhibit and teach overseas. There is also a reciprocal relationship established with fellow artists where I have been able to invite international artists to work, reside and exhibit within our Australian ceramic communities. It’s also about absorbing and observing ways of working collecting ideas. I am not so interested to making lots of works but rather give myself precious thinking time. It’s when I go home and sit in my own studio where things can be controlled that I find what I have learned will start to emerge in my work. New works will come sometimes a couple of years after the residency. 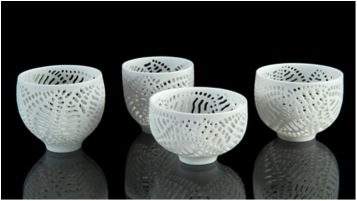 Your residency in Canada was to have a huge effect on your ceramic art. Can you expand on this?

There were certainly a number of effects on my own work. Initially I had gone to Canada to do a workshop in glaze making with Robin Hopper at the Metchosin International summer school in British Columbia. I had chosen to do mid fire glazes but on seeing some lovely high fire white glazes and celadon’s come out of the test kiln I was immediately enamoured by them. On returning home I started experimenting with them. It was also my first time to experience a Canadian spring and the physical landscape of Canada from the mountains of Alberta to the prairies of Manitoba. Being spring I also experienced seeing the snow melt water runoff from the mountains, into the rivers and streams, the numerous lakes and the vastness of sky and plains.

As a result I started in my Red Deer College residency in Alberta a small series of pierced and glaze in filled leaf cups. Later on my return to Australia I installed a gas kiln and started to work on a series of “Ripple vessels” based around the issue of water. Works reflected the colours of water plus the shapes water ripples and the rain tanks we stored water in on our farm. 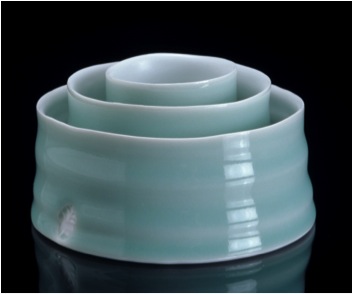 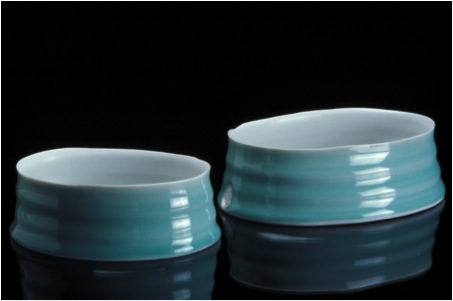 Your work is functional. Can you discuss this aspect?

Some of my work is functional, but not all. During my nearly 40 years as a maker I have had to constantly reinvent my practice to survive. This was particularly necessary during the early 90’s when our economy took a dive and people stopped buying my art pieces. The market interstate was not selling and people only purchased items that were functional. As a result I employed a thrower Warick Palmateer to make bowls and cups for me which I trimmed, decorated and sold locally. These were enough to keep me going until the market recovered 3-4 years later. I also took on some workshops as well to help out. More recently I have made small runs of work in high fired celadons and clear glazes that can be used both functionally and decoratively. I enjoy using other artists work in my own kitchen so appreciate the value of beautifully made functional ware.

Although you work takes on a lace like appearance, it is from nature that you gain you inspiration. Please explain this?

I grew up on a farm in East Gippsland in the state of Victoria so from an early age felt close to the land and nature. Bush walking and nature study were favourite activities. My early career choice was to become a marine biologist as I loved the minutiae of freshwater water and ocean life. I also kept a freshwater aquarium from the age of 12 to observe the animal life plus had a small microscope to study with. A relocation from Eastern Australia to Western Australia in my early teens threw my plans out as the adjustment education wise was quit traumatic. As a result I ended up studying art more and entered teacher training to become an art teacher. My love of nature never left and so over the years this has translated visually into my work. Over the years I have observed the environmental changes as our climate in Western Australia dries out and have tried to reflect this through the delicacy of my pierced work. 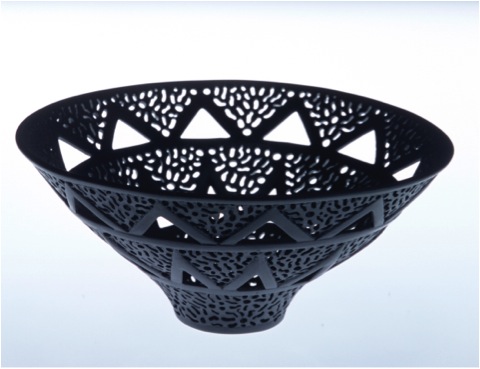 You do not use glazes, can you discuss this?

I generally don’t use glazes on the finely pierced work as they conceal the carving and piercing and it looks too shiny and rather nasty. I like the tactile ivory like surfaces of the polished form. It gives softness to the elaborate carving rather than a harsh bright surface. I have however used glaze when the piercing has been minimal in nature as in the polished in filled glaze works as in the Meander pouring bowls below. I do of course use glazes in and on my functional work. 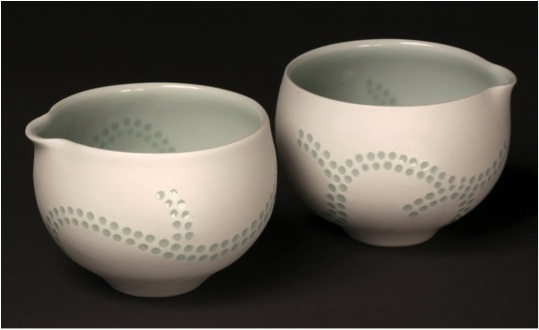 When did you decide to use polish rather that glaze?

As soon as I started piercing back in the very early 1980’s the clay I was using looked much better without any glaze. I never felt these works needed glaze. The tactile pleasure of the polished surfaces is akin to polished waterworn stones.

What is you colour palette?

For the pierced works I like white, cream or black porcelain bodies. I have also experimented with soft browns.

For the glazed works I like clear glazes with a faint hint of blue or green from a reduction firing. I also enjoy classic celadons in blue and greens plus a beautiful satin white. Recently I have been making a couple of small works with a classic dark black Tenmoku. This came out of a Gallery 523 Residency in 2012 In Hai-an China. The porcelain body was badly specked through with iron so a classic Tenmoku was used to cover up. I liked the result.

Recently I have also been playing with deconstructed decals from China and introducing some imagery and colour to simple bowl forms. 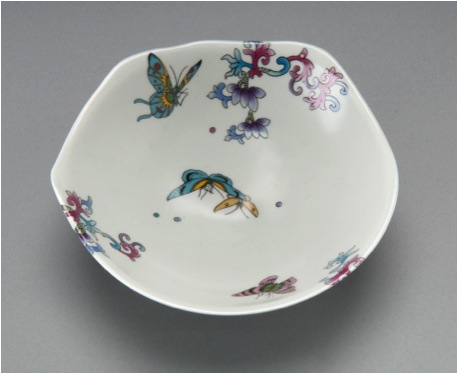 You have a large list of galleries with your work. How have you built up this following?

I started locally putting work into West Australian galleries and shops after my work was shown initially in group exhibitions as a young artist. From there I attended conferences, workshops, taking samples of my work along and visited galleries to show them and some accepted me.

I was also very early on a member of the Crafts Council of Western Australia and Craft Australia (sadly both now defunct) who promoted Australian artists locally, interstate and internationally. From these promotions I was able to build up a number of galleries to represent me. I realised at an early stage in my career that having work professionally photographed was critical to exposing work successfully. I managed also using these images to get work and articles published in various craft magazines. Acquisitions of works into regional state and interstate and overseas museums, collections and art galleries also helped.

In 1999 you were part of a selected exhibition ‘Australian Craft to Japan’. Can you explain how this evolved and the importance it has to you personally?

This exhibition was organised by the Australian Crafts council but I can’t recollect any details of this show as it was some 15 years ago (I am not able to access my printed materials as I am away from home at present..) The Australian Crafts council now sadly defunct played an important role in promoting Australian crafts people overseas. This was a great confidence booster and a way of entering into the international arena with substantial government support.

Discuss how your tutorial work at many Universities throughout Australia fit in with your studio work.

The tutorial work largely came about as a result of having exhibitions in other states. My galleries have contacted local groups or educational institutions or I have done so as a means of connecting with my peers plus by having these workshops and giving talks I am further able to keep myself employed and financially solvent. I enjoy doing these tutorials as it gets me to travel and catch up with happenings in the ceramics world interstate. Perth in Western Australia is a huge distance from Australia’s other major capitals so we tend to often miss out on visiting artists and major exhibitions of contemporary ceramics.

Your work is in many collections, both public and private. Can you discuss one or two pieces and where they went that have given you special pleasure?

One of the happiest moments was the winning of the Fletcher Challenge award in New Zealand in 1988. The work “Rites of Passage” was acquired by the then Fletcher Challenge Company and given to the Auckland Museum and Art gallery in New Zealand. This marked a significant point in my career as it was a major international award giving me some great exposure in Australia and overseas at that time.

Can you discuss you work in relation to two actual pieces?

The pierced work below was made recently for an exhibition in Monsalvat arts community run by Skepsi Gallery in Melbourne. Technically these are very difficult works to make and the loss rate is quite high from distortion in the kiln and cracking during the making stage, I have been able to partly resolve the technical issue of cracking by the addition of a small amount of paper tissue into the casting slip.
The “ Hardenbergia is a native creeper found in our bushland and popular for home gardens. It has bunches of small purple pea shaped flowers in spring. 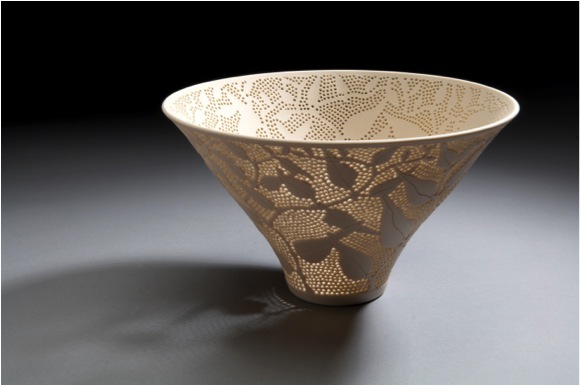 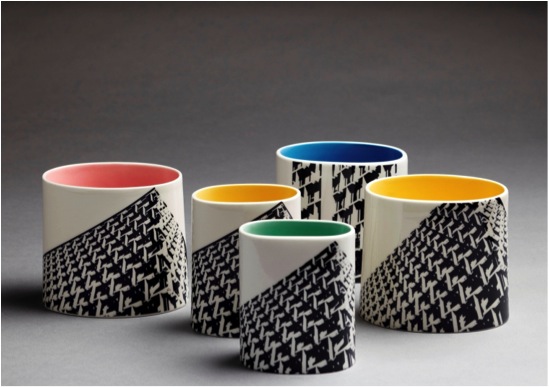 The works above were commissioned for the 50 year celebration of the building of Perth City’s Council House. As a new style of building in the 1960’s it created a lot of controversy and during the 1990’s was to be demolished. A public campaign saved it and it has been beautifully restored. This was the first commission I had undertaken in many years so it was quite a challenge to produce. I chose the colours based on a 1960s palette plus the black and white abstracted decal to reflect the pop art movement of the time it was built.

Interview by Deborah Blakeley, May 2014