Samantha Bryan, Sheffield, UKSomehow I became a ‘fairy maker’, it certainly wasn’t intentional. I would not call myself a fairy fanatic. I have however always loved stories, characters and the details that make a tale special.Zoneone Arts is delighted to bring Samantha Bryan to you… 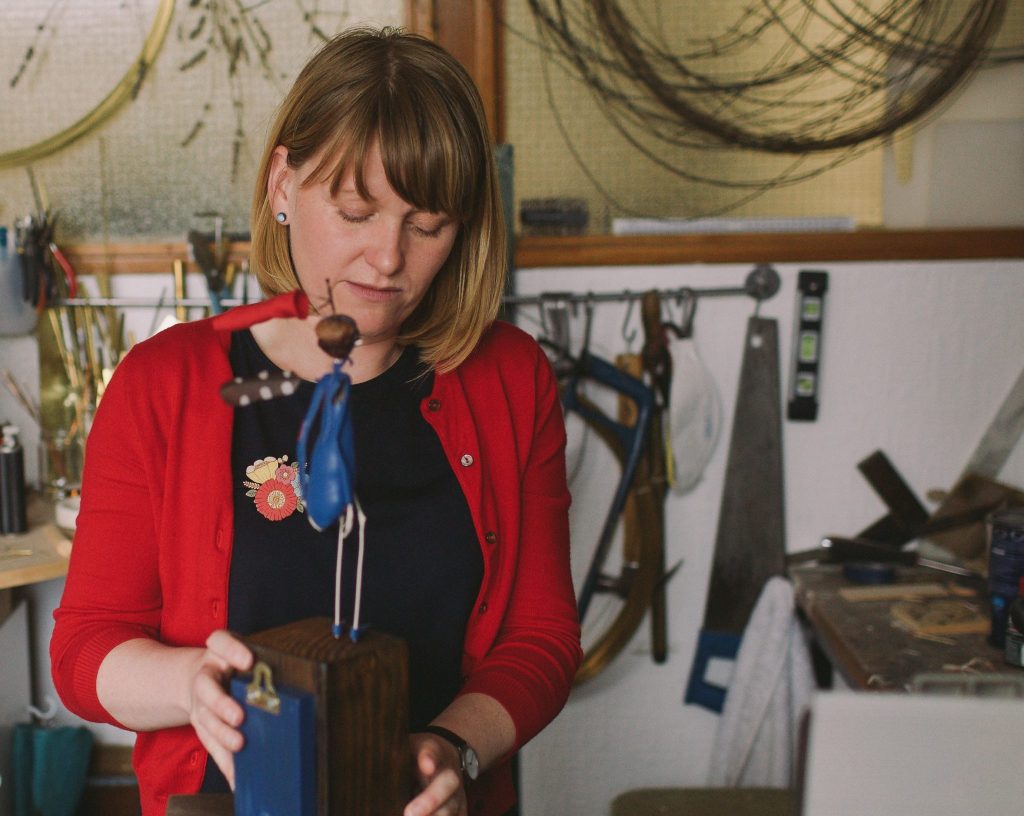 Your comment, ‘I find myself preoccupied with everyday life, but not my own – that of the fairy’ can you expand on this?

Somehow I became a ‘fairy maker’, it certainly wasn’t intentional. I would not call myself a fairy fanatic. I have however always loved stories, characters and the details that make a tale special. I made my first fairy in response to a brief whilst still at University. It was quite a traditional interpretation of a fairy, something that you might put on top of your Christmas Tree.

That set the ball rolling. 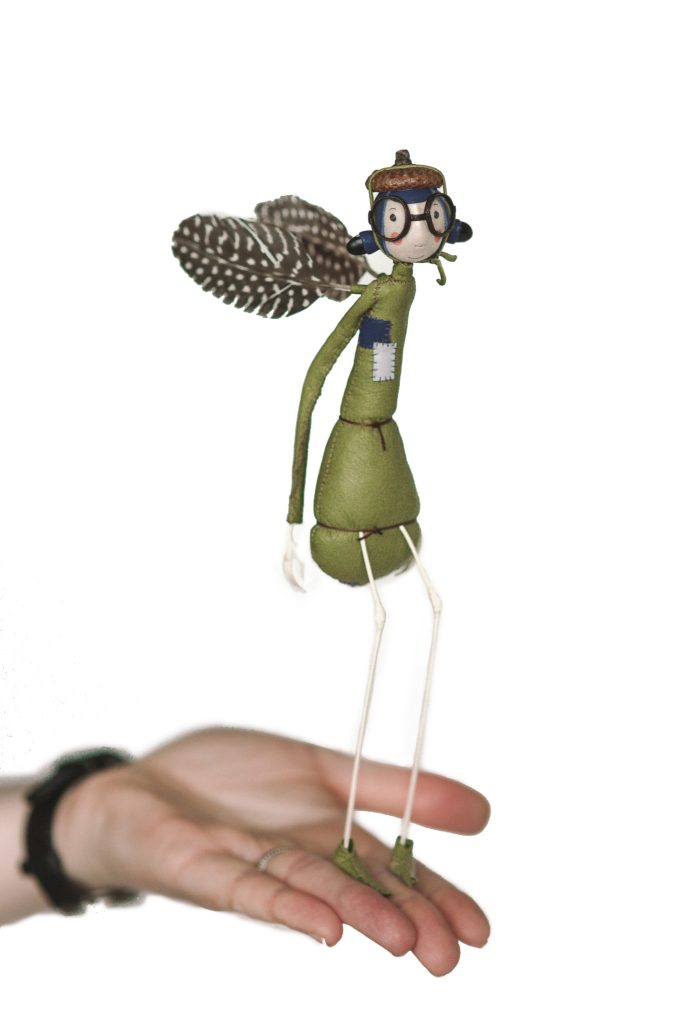 I started to focus on my character’s world. I took to the library to research folk law and stumbled on a book of Victorian gadgetry.  It wasn’t what I was looking for and it felt like a distraction, but I was so interested in the items that people once thought were necessary.

I couldn’t help but to continue on this path of research. I was amused by the inventions that seemed so ridiculous to a modern world. Like the ‘self tipping hat’ for the polite gentleman. I was also taken by the wirey aesthetic of the gadgets.

It’s hard to track the path but I spent a lot of time in the metal workshop making gadgets out brass and copper. It took me a while to realise that I could fuse the two lines of interest together. 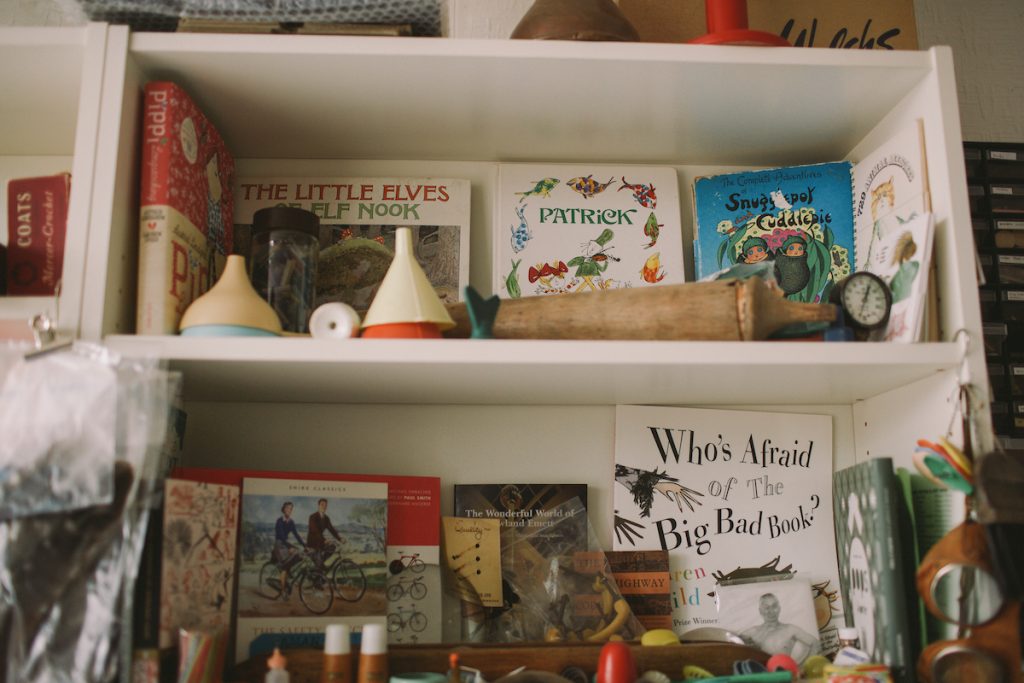 When did you first make your own fairy and how have they matured?

My early fairy character became heavily inspired by insects and plant life. I’d stitch jackets inspired by a beetle silhouettes, suits that borrowed form from plantlife. I used a lot of dried pods, seeds, shells in my early work. I would hand dye leather to look like something you’d find in the garden.

All those early influences and experiments formed the fairies of today. They are simpler, slightly less detailed and made out of materials that can be sourced with more ease. They are also more refined.

You have a ‘Species’ of fairies, discuss this idea in relationship to your work?

I have made many fairies over the years. Each one entirely one of a kind, but they share the same processes, materials…for that reason I think of them as a species. 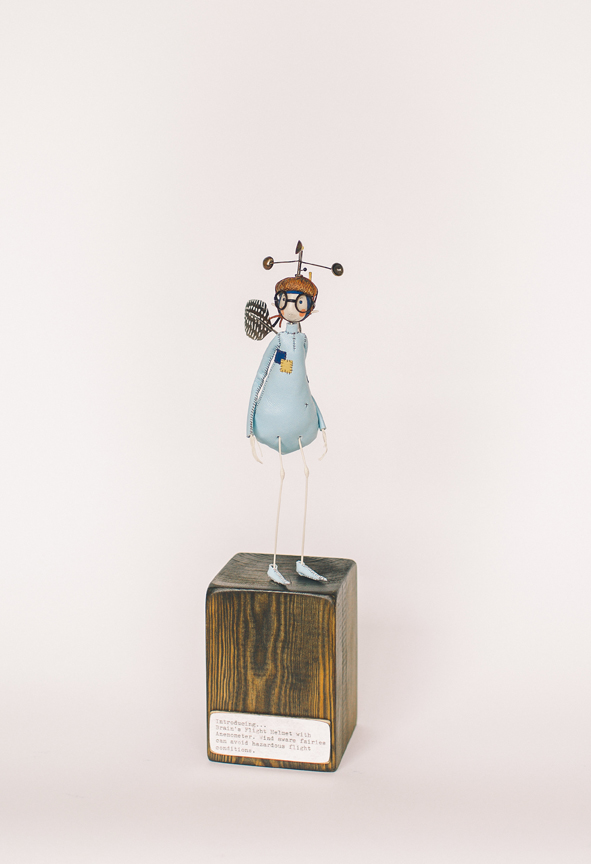 Does the fat bottom effect, influence the balance of each piece?

Ha…No it does not impact on balance because of how I construct them.

Discuss the organic and collected objects you use in your work.

I love to repurpose existing items. Acorn cups have become my standard issue fairy helmet. I collect all sorts of organic components to make helmets, earmuffs, wings and even nozzles. I sit making in front of my ‘treasure shelves’. These are stacked with all kinds of found items, buttons, seeds, old containers, lids, spoons. These become part of a sculpture as the need arises. 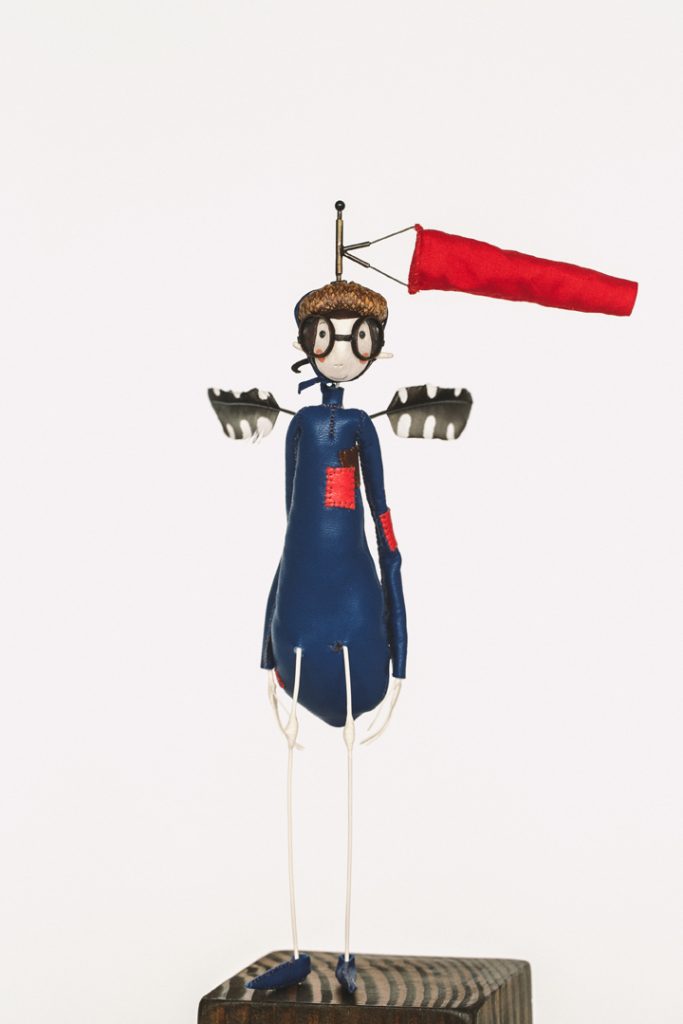 When and how did flight become an integral part of your art practice?

I have always been interested in flying. I wanted to be a pilot when I was little. The first time I flew in an aircraft, I was 13/14. It was at RAF Finningley before it was decommissioned (now Doncaster Airport). It was in a Chipmunk (see below) and I had the biggest parachute kit strapped to my bottom. I had to be packed up with cushioning so that I could see out of the windows. (Imagine a Robin Reliant with wings). It has to be one of the most exiting, exhilarating and embarrassing experiences of my life (ill fitting parachute shame, I hated being small) . I still vividly remember the window rattles, the throbbing of the cockpit, the weight on my shoulders as we did loop the loop. 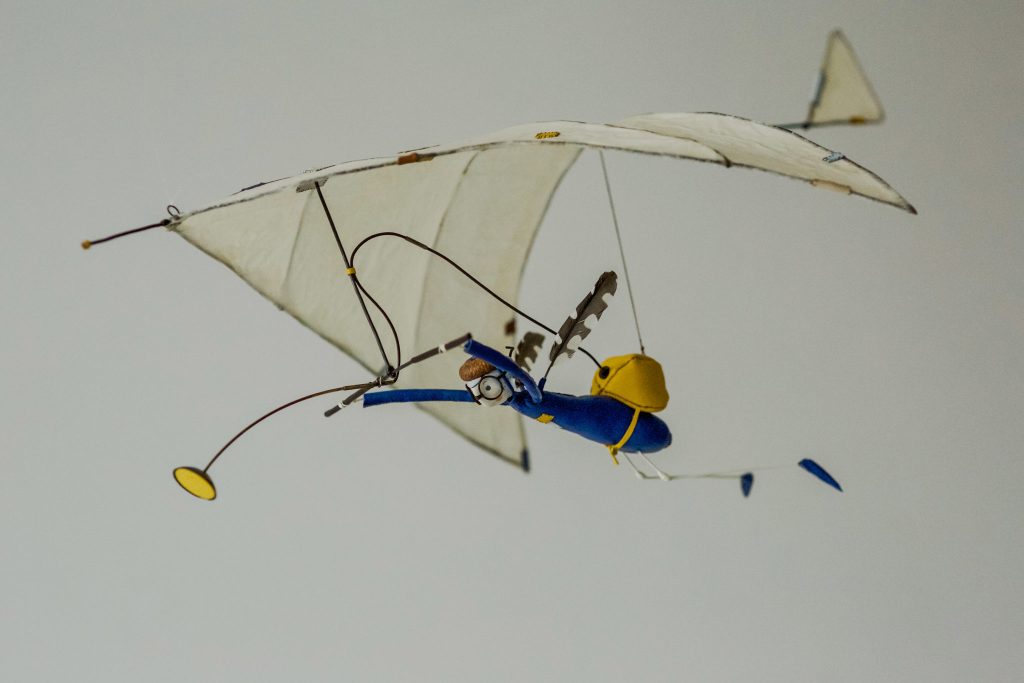 Discuss the titles of each of your pieces?

Each piece has a title that I type on one of my many typewriters (11 last count).

The title is designed to give a snippet of the piece narrative. So that the viewer/commissioner/buyer can fill in elements of the narrative themselves. 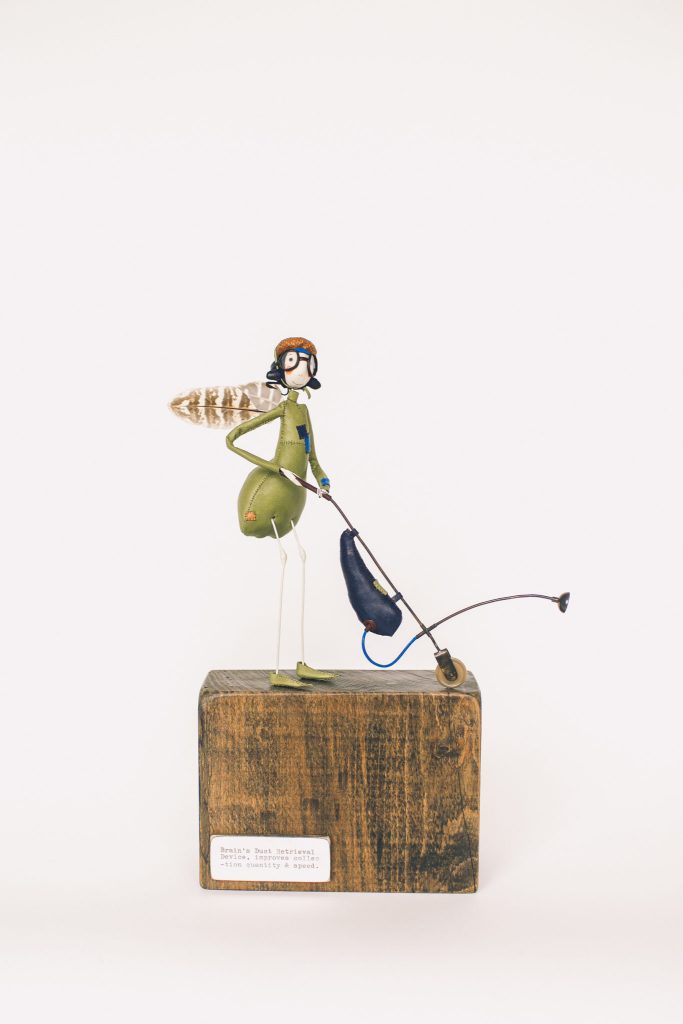 You take us back in time, right down to using a typewriter, discuss?

I am interested in the old, I like to bring things back to life. I am able to transport people back in time by my material choices, the language used on my titles, the way the brass is chemically treated to look antique. Lots of aspects come together to contribute to the nostalgic feel of my work. My love for vintage naturally feeds into my choices and decision making.

Discuss the brief that you had with the Queen Elizabeth Grammar School for these classes?

I have worked with that Queen Elizabeth Grammar School a few times. The brief is to work with them to create a mixed media sculpture. As is always the case, the project begins with a ‘meet the artist’ session. A slide show and Q&A. With all my workshops the idea is to create your own characters based on your own ideas. This was the case here, but the theme was the Olympic Games. 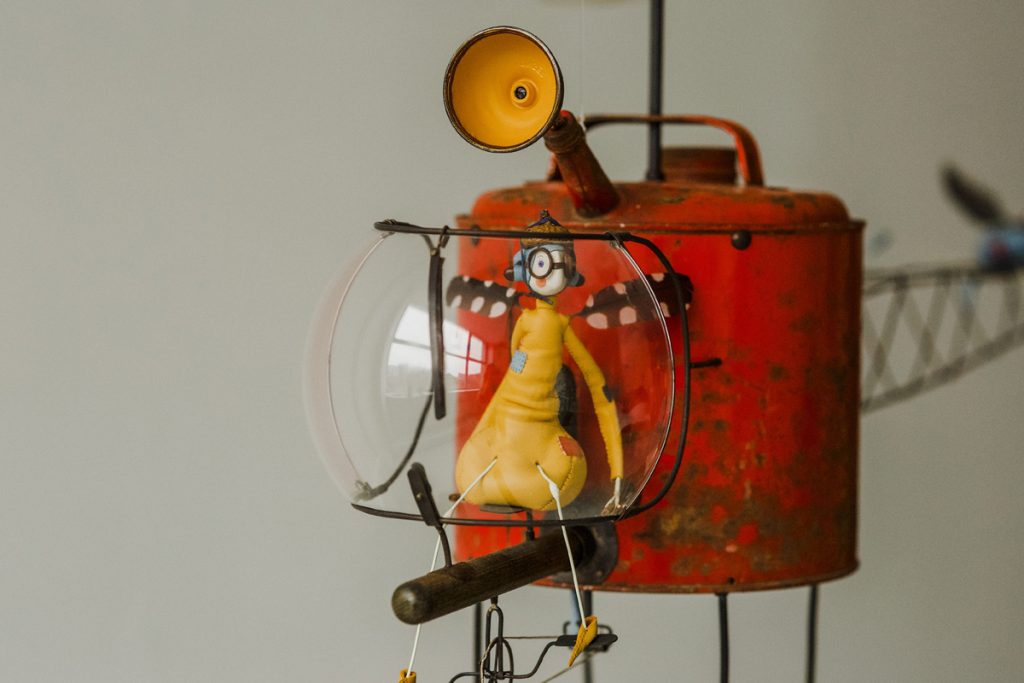 How did the boys react to making Fairies?

With all my workshops the idea is to create your own characters based on your own ideas. This was the case here, but the theme was the Olympic Games. I teach them how to work with new materials, how to combine them how to manipulate wire and assemble.

I did find that boys in all boy classes can be much more open and less influenced by stereotypes. I found a love for glitter and the colour pink which was really refreshing. 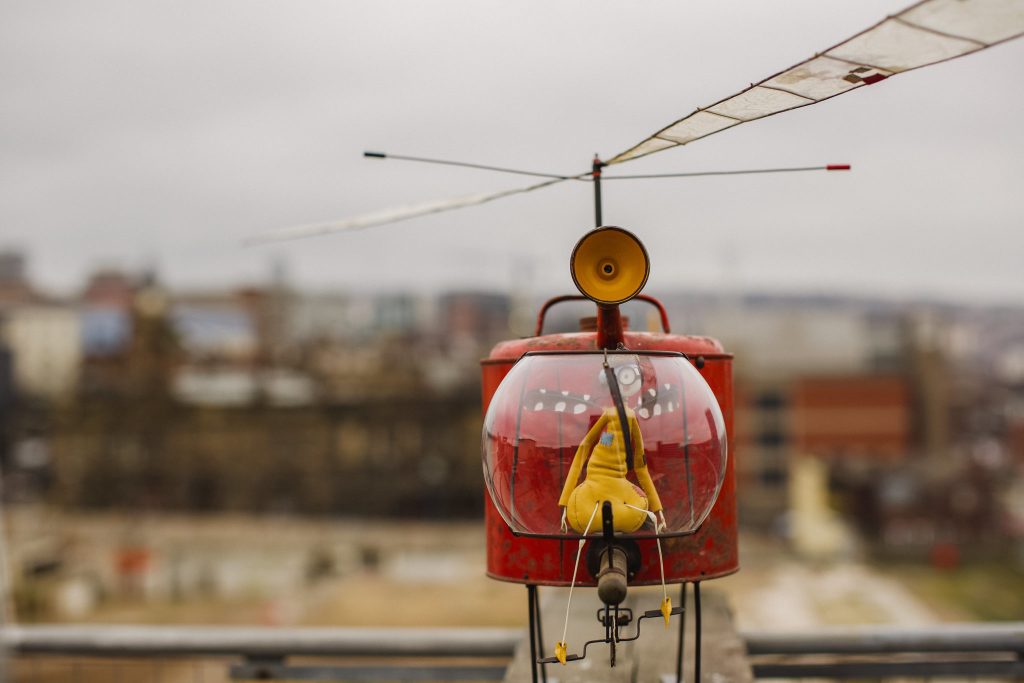 Discuss the other aspect of your career, teaching.

I always intended to become a teacher, I had a place to study at Leeds after my Art degree. My degree show went much better than I could ever have imagined. It practically sold out and I have two offers for solo show before I even graduated. Consequently I decided to give up my place on teacher training and set up my first studio with money raised from degree show sales. 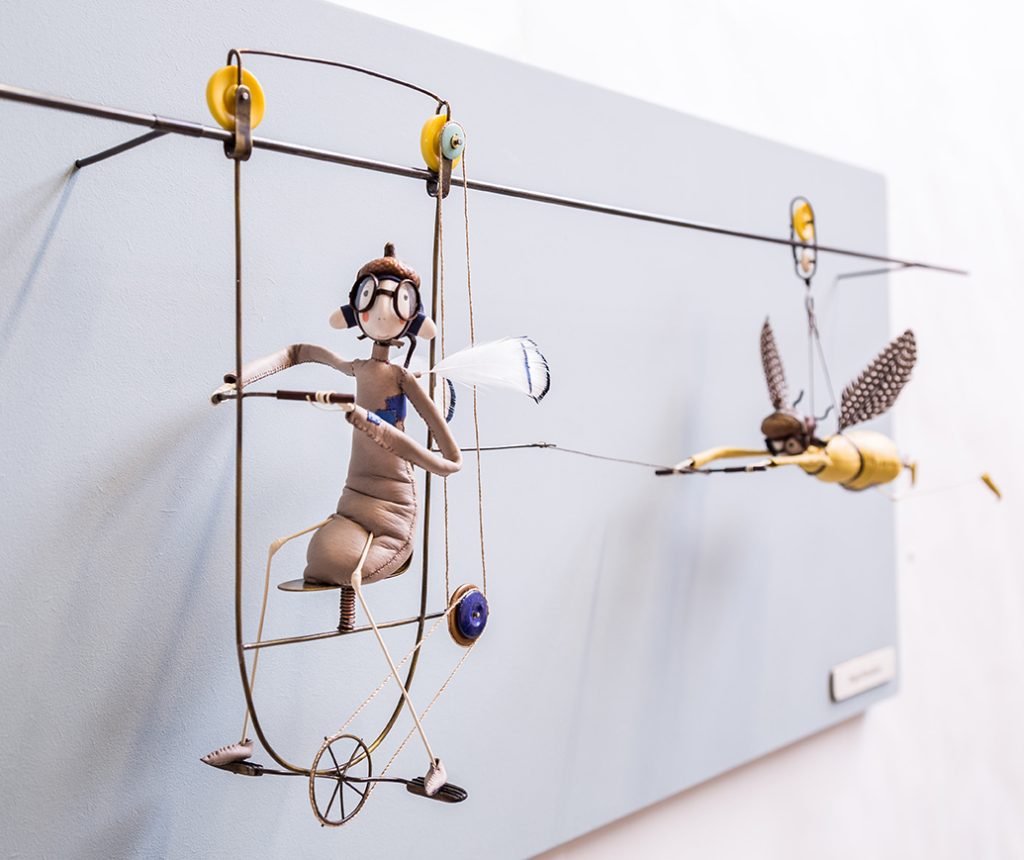 The desire to teach did not leave me, therefore I now have a great balance of teaching and making. I regularly work in schools running character building workshops for all ages. I also run specialist sculpture workshops for adults.

I share my processes and a little bit of my brain to help others to create their own creatures…whatever they may be.

The types of classes you take?

The skills needed for classes.

These are designed for all levels of ability. I tailor my workshops to the group that I am working with.

Where in the world have your classes taken you?

Across the UK, Australia and New Zealand.

Explain the process you have for Commission work?

I am fortunate in that much of the work that I produce is for commission.

Mostly I stay within my fairy narrative and this works well. Commissioning is a flexible process. Some come to me with an idea of what they would like based on pieces they have seen on display. Others (the most exciting kind) arrive with a budget and ask what ideas I have been working on.

Discuss one or two commissions that have been challenging for different reasons.

Last year I worked with The University Of Sheffield’s Physics and Astronomy Department on a project for the Festival of the Mind. The process involved responding to the scientists research with sculpture. I collaborated with two Doctors who’s research was amazingly complicated. Designing and making sculptures out of something so significant was intimidating and completely out of my comfort zone, a real challage.

I always find making for very special circumstances particularly daunting. For example an engagement piece to hold the ring or a commemorative piece. It is such an honour to be selected for such a special piece. I can find people’s expectations weigh heavily on my mind. Particularly if the commissioners are makers themselves which was the case twice last year.

Expand on your nickname ‘Brain’.

‘Brain’ was a nickname given to me by the tutors whilst at university. I spent much of my time in the metal workshop wearing a white coat and goggles.

(Like the thunderbirds character). The nickname stuck and soon enough everybody called me brain. My work became known as ‘brains fairy aiding inventions’ How transportable is your work?

I post work out all over the world. It just needs some strategic packing. It is lightweight so posts easily. I am also able to flatpack pieces when I travel.

Would you like to have galleries outside the UK represent you?

Yes certainly. I only work with a small number of stockists due to my work being so time consuming to make. But I am always happy to discuss exhibiting my work outside the UK. Fairies love to travel!