Sally Simpson’s close alignment to her natural environment and many visits to Natural Museums, has allowed her to bring the two together. She transforms natural and man-made objects to create contemporary ‘artefacts’.

Zoneone Arts is delighted to bring Sally Simpson to you… 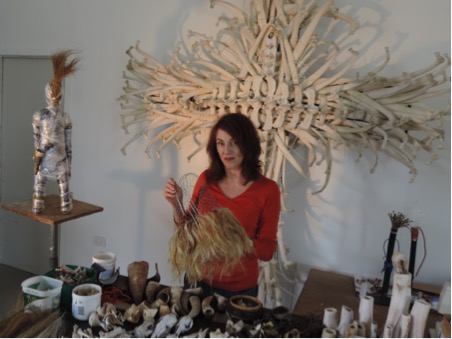 Can you discuss the ritual and ceremonial rites in your installation ‘Precipice’?

The background to all of my work is an interest in ‘power figures’ and ‘votive objects’ used in many cultures as mediators between humans and nature. In addition I refer to the tradition of using materials at hand to make such objects. However my sculptures embody personal questions about the contemporary relationship between humans and nature, in an era of many confusing and contradictory value systems.

Why was the exhibition called Precipice?

The anchor piece for the exhibition held at ANCA (2013) and Gallery Smith Project Space (2014) was ‘Precipice’, consisting of 9 figures poised along the edge of a bench. The figures kneel and extend empty hands, inviting interpretation by the viewer. Kneeling is associated with a position of last resort, whether in prayer, submission or despair. The exhibition held at Gallery Smith Project Space included 5 kneeling figures carrying empty cow horns. The idea underlying this body of work is that a precipice is a moment in time when an individual or group faces an unknown future. 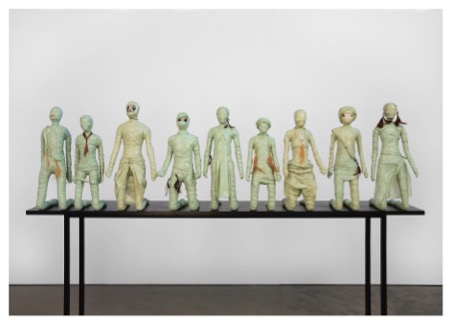 How many figures were exhibited together in this exhibition?

Discuss the collaboration between the Gallery and yourself in putting this installation together?

The delight of working with a commercial gallery is that they are experienced with installation. Emma Benichou and Marita Smith spent a lot of time deciding on the best display, and although they consulted me often I was happy to trust their judgement. For example I agreed with their decision to remove all drawings planned for that show, which made it far more visually powerful. 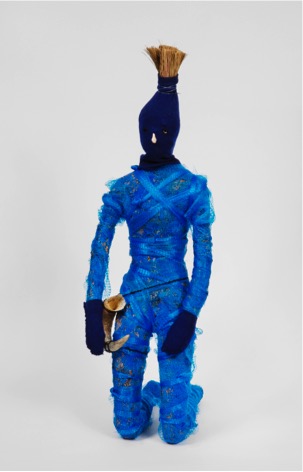 Discuss the use of found objects in your work?

In the past I’ve used objects found at particular sites and these materials have inspired the forms created. For Precipice the materials relate to my life on small farms over the last 25 years. I like to begin with the soil or vegetation of the area, as traditional sculptors began with clay or timber. For several years I worked only with clay so I still find modelling comes naturally. Now I include any found objects as I build and model, as these embody both the site and the issues I’m working with. 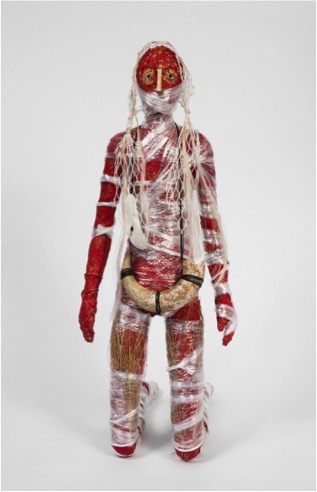 Within the found objects, do you always combine natural and man-made objects?

So far that has been the case because it is my way of merging the process with the ideas. However I can imagine an idea might lead to a decision to use either one or the other.

Do you think living in the country has brought a stronger Eco influence to your work?

Most definitely. Issues such as revegetation of rainforest, water and power sources, and the potentials and limitations for a local, organic and sustainable lifestyle are part of daily life. Which is not to say that I live according to ideals but rather see how complex the issues are.

Discuss the relationship between human and the land in your work?

I hope I raise questions rather than convey opinions. Land changes constantly, and so do our values about land. The issues today are complex so it’s important that people consider as much information as we can to form our own opinions and act on them as best we can.

The making of ‘faces’ from fish bones, lace and mud. Can you explain why you have used this particular combination?

The objects made for ‘Venerated Remains’ are examples of the materials dictating the form. After I had collected mud, irrigation pipe, fish bones and a lace curtain from the dried out bed of Lake Mokoan I tried putting them together in many ways.

The early works exposed the irrigation pipe and used other found objects. Over time the lace began to wrap the irrigation pipe, and the fish vertebrae happened to fit perfectly at the end of the pipe and acquired a different character when used in that way. When the final form suggested mummified fish it embodied layers of meaning regarding Lake Mokoan. 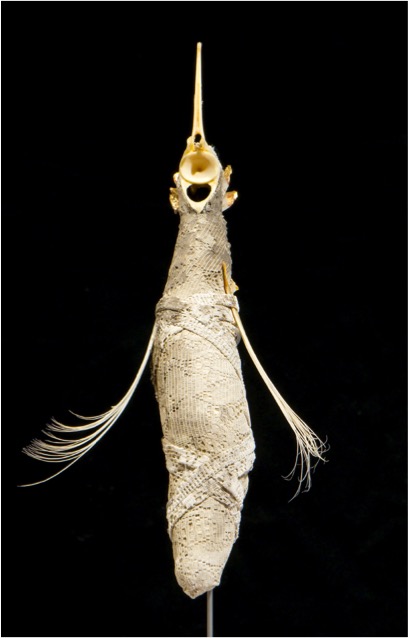 Can you explain the Meroogal Women’s Art Prize and how it affected your art practice?

This prize is named after a group of women who ran a property in the early settlement of Nowra. At the time I wanted to make a piece about the drought, and a watering can that could not possibly hold water, made from the dried out ribcage of a kangaroo, was decorated with chicken bones and stitching to reflect upon the harsh Australian rural lives of women settlers. Although I had been collecting bones for many years this was the first time I made a sculpture using them, and it was the beginning of a mode of practice that has continued since.

Can you expand on your ‘The Berry Series’? 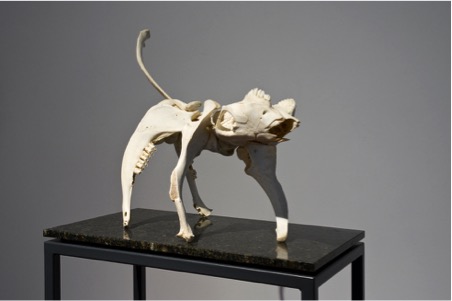 It was appropriate to use cattle bones for this series as I lived on a former dairy and had observed Berry change from rainforest and cattle farming to retirement and holiday homes in the time I was there.

I intended to express a type of memorial to the former farming life, so used graveyard imagery of the cross and totems. The ‘Cattle Dogs’ were more affectionate and playful, made specifically for ‘The Dog Show’. 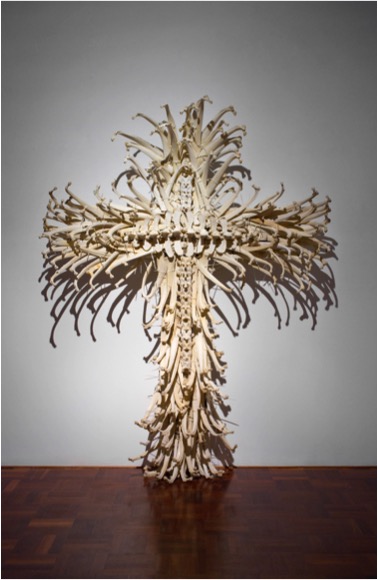 How has your Master of Philosophy in Sculpture influenced your work since 2012?

The rigour of researching and writing about my ideas within the Australian National University sculpture department established a more professional approach to my work. 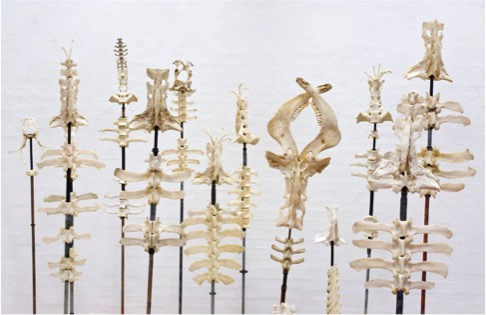 I’ve just completed 2 more kneeling figures using quite different materials for ‘Imaginarium’ curated by Amanda Stuart at Belconnen Arts Centre. These are probably the last of the kneeling figures, but the materials, wax and thread ‘hybridising’ the bones of many different animals feel like the beginning of a new direction.