Sally Cleary, Australia / FranceShows the depth of the development of her work through place and time.Zoneone Arts brings Sally Cleary to you… 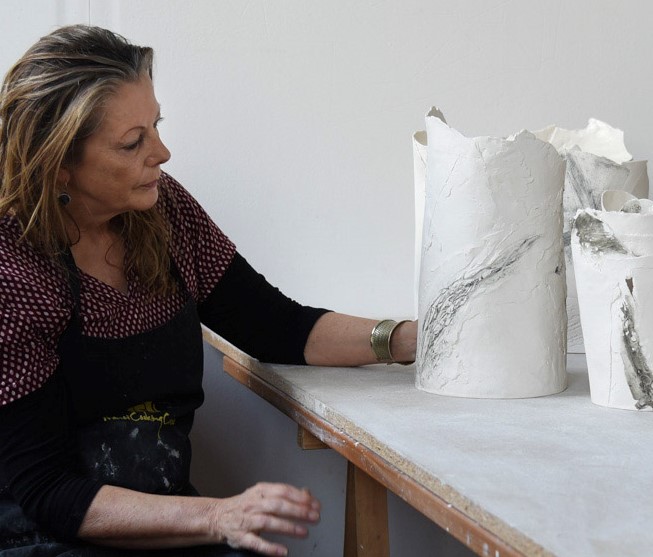 What lead you to Paris?

I married a French man in 2014 and moved to Paris. It was unexpected but life changing.

How has your Australian background influenced your current work?

I see my current artwork as a continuative narrative, inspired by place and materiality. 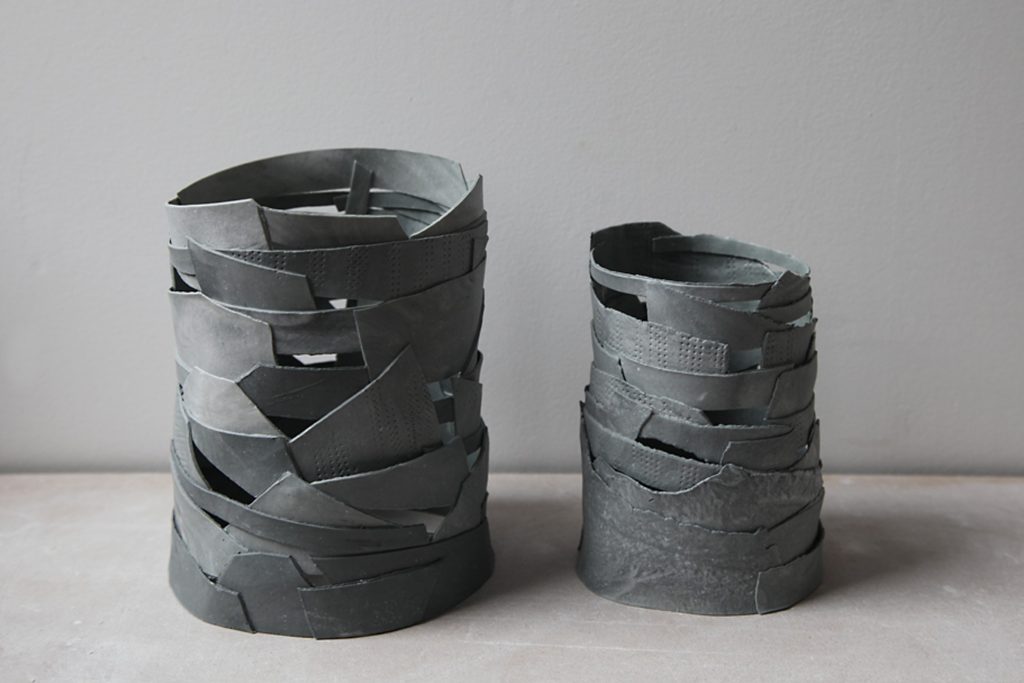 I have lived in Australia most of my life and worked in ceramics since the age of 18 years. I taught ceramics at RMIT University, Melbourne for over 15 years, and explored a wide range of techniques and materials during this period of time, including porcelain.

Initially I made architectural ceramics – large wall murals, tiles and ‘architecture inspired’ wall sculptures. I travelled to Europe when I was 18, and this had a great impact on me – the ancient buildings in particular, and this became the research for my art practice and master’s degree (1992-95). In 1999 I moved to the rural countryside of Victoria and developed ‘organic inspired’ artwork, incorporating found objects into my work and developing large-scale mixed media installations. This became the core of my research and PhD (2007-14), “the Nature of Things: the re-interpretation of the still life genre in the 21st century”, which focused on mixed media installation art & ecology. See website www.sallycleary.com

‘State of Ruin’ explain how you used architectural ruin in this series?

State of Ruin is a continuation of my PhD research examining the Still Life Genre in the 21st century. At the core of this research lies a warning about the demise of ecology and humanity. The vessel forms in this series are architectural, but often represent landscapes in a state of ruin, and therefore a metaphor for the state of our planet. 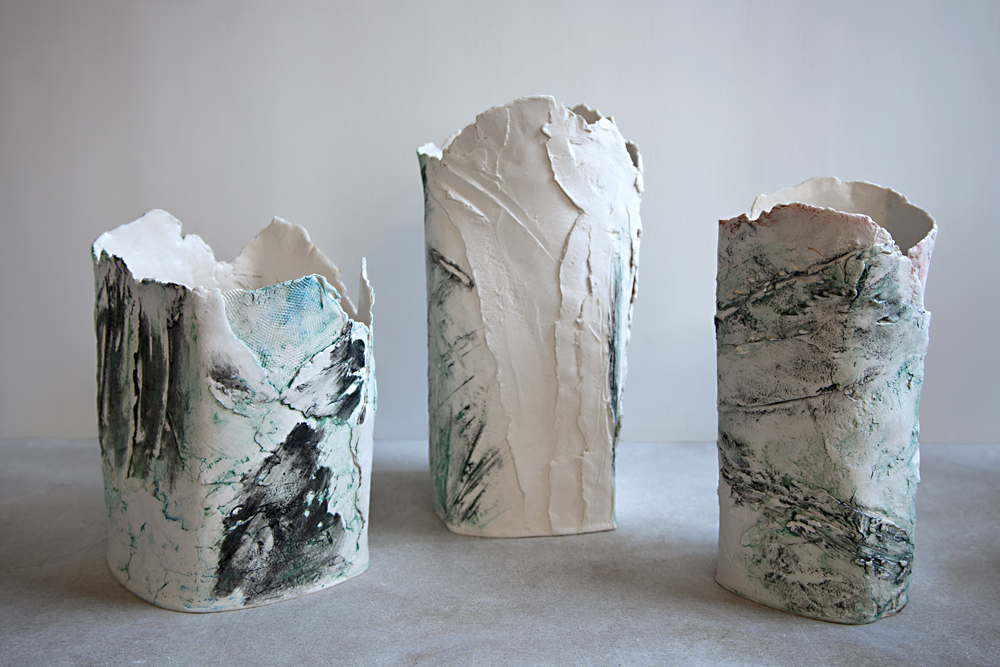 Can you briefly discuss the techniques your use in this series?

Most of the works are hand-built using porcelain paper-clay slabs. This clay is a very versatile material, allowing the walls to be very thin and translucent after firing. 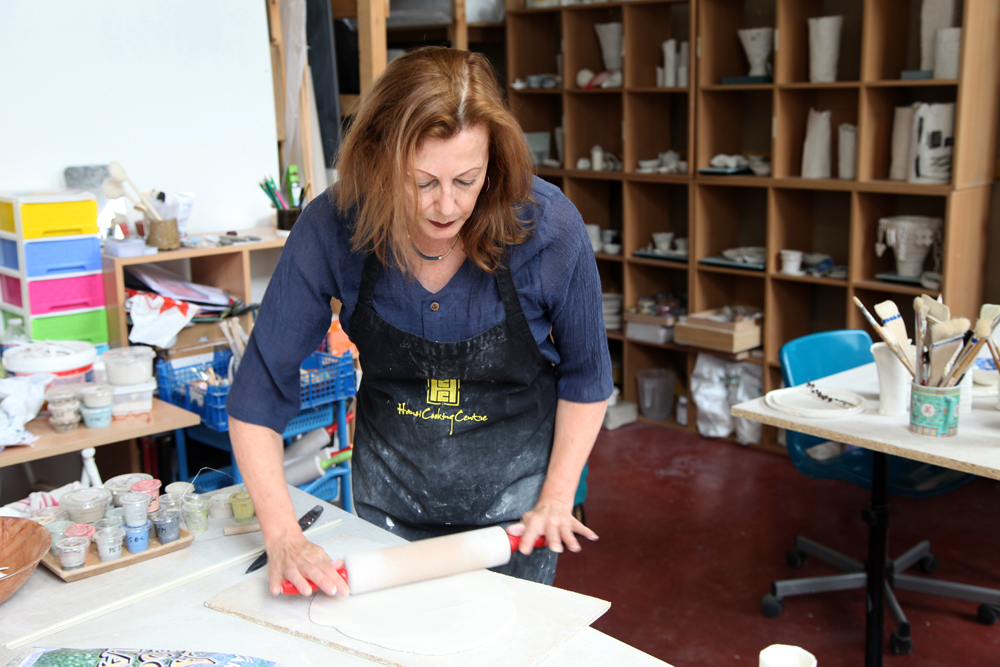 Initially the pieces are made flat and the porcelain in cut up and reconstructed like a patchwork. The slabs are also textured, either by hand or with textured moulds. I use a black pigment to stain the works, which is also fired.

You have two series of ‘State of Ruin’ 1 and 11,  expand on the involvement of the second series.

The two series evolved quite naturally, however I wanted to take away the function of the pieces as being utilised as vases, rather viewed as sculptural pieces. By removing the bases and adding holes to the work in series 2, the works took on a new dimension. I was also able to add light to the work. After travelling to Africa in 2019, I began to add textures inspired by the haphazard constructions and often unfinished or abandoned buildings I had seen in West Africa.

Comment on how combining works you can develop the feelings of a city.

As the artworks developed, I began to view them more & more as an installation of multiple pieces. Although many of the pieces were inspired by landscape, particularly series 1, I see the works as a still life narrative of an abandoned city in a state of ruin – perhaps after an ecological disaster such as Chernobyl, or a place that is no longer inhabited – where human life has ceased to exist, as in past civilisations. I enjoy positioning my work on the floor, to create floor installations. This also adds to the illusion. 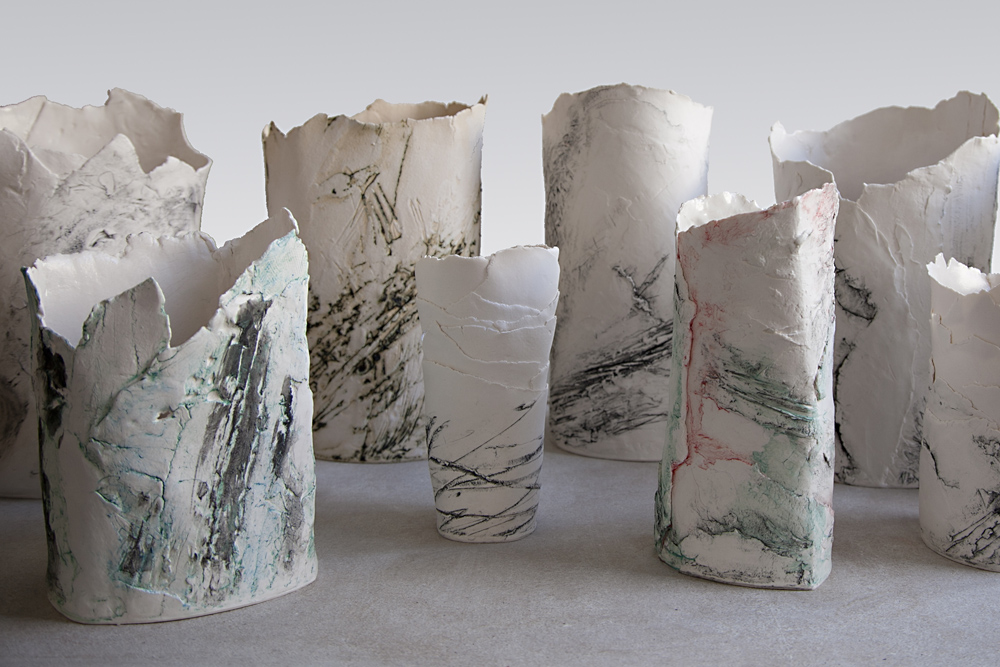 When I construct these artworks, I am imagining each object as a place – usually constructed in my imagination. Series one was inspired largely by a journey into the salt desert of Bolivia, and the Atacama Desert in Chile.

When I view the finished work, I am trying to engage the viewer with the sensation that they are interacting with this fictitious landscape or an architectural ruin on some level. Perhaps a place they have visited in another space/place in time.

The still life genre creates the illusion of entering a private intimate stage. The detail within the objects is important to draw the viewer into the space. The meaning / symbolism behind the objects is not always clear, but I try to pique the interest of the viewer to investigate the objects further.

Discuss how you see ‘Still Life’ in the 21st Century? 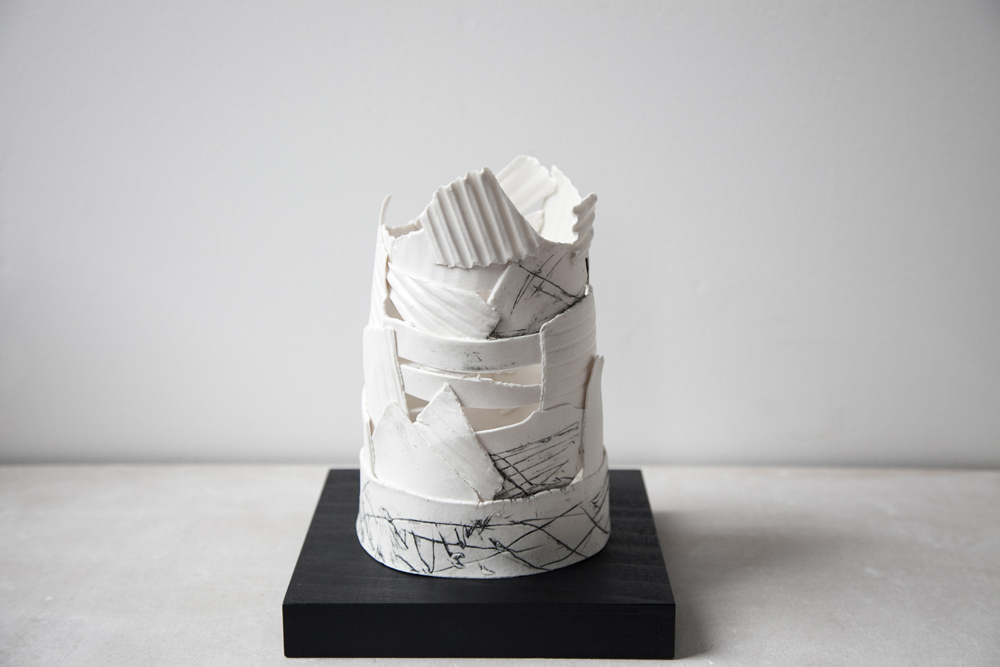 Why are they so important 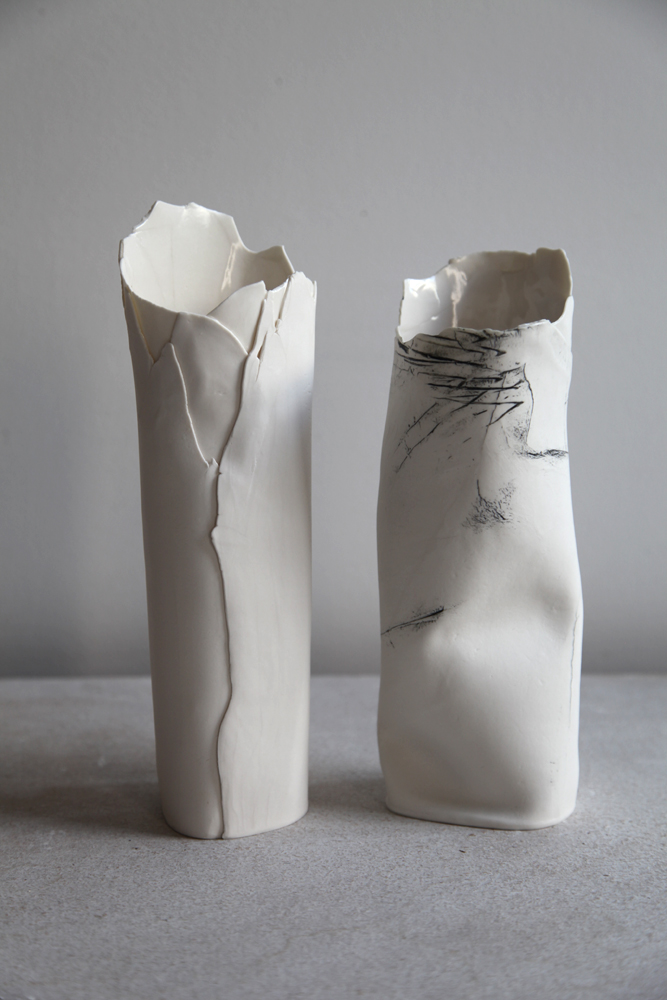 The vases / vessel forms for me represent a very pure form, which have a strong tradition in ceramics. On one hand they can be functional – to hold flowers, emit light. On the other-hand they can be viewed as purely sculptural forms – minimal & restful forms, allowing the viewer to stay still in their presence. As a circular form, you are invited to view the object from all sides to read the complete artwork. When I photograph the work, it is obvious how much each piece changes when photographed from a different angle or positioned next to another piece. I am not sure that the vase / vessel form is important – however the process of making something flat 2D, & then turning it something 3 dimensional, is a current obsession for me, and as a series of works it almost seems infinite. The porcelain is very white and needs no colour. To bring out the texture in the work I add black stain, so the works (not always) are black & white. I have recently started adding colour into the porcelain, so this is the next direction for me – but I love the purity of the white porcelain. 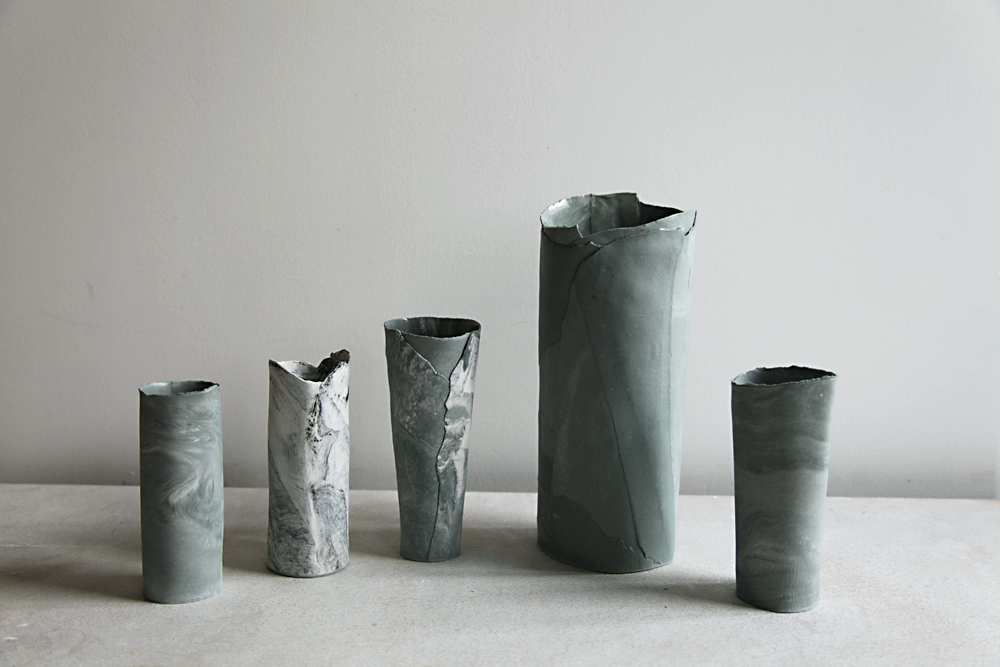 You taught ceramics at RMIT Melbourne.  What were two aspects that have become memorable from this time.

Teaching ceramics has always been a pleasure for me…interacting with students who are willing to learn about ceramic materials and forms. As a teacher I tried to encourage the individual creativity of each student, and not impose a particular style. The two aspects that are most memorable from this time were teaching students in Hong Kong over a 15-year period. This was immensely rewarding as the students seemed very uninhibited and free in their creativity with ceramics, as opposed to Australian students who had inherited a British / Japanese tradition passed down through their lecturers. The second aspect for me was being engaged with research and understanding that research can form a vital role in understanding one’s own artwork, and the various directions art research can take someone on their own personal journey.

Discuss the importance, of developing you own style is for a practicing artist.

I vary rarely follow trends – thus I am always out of time in a sense. I have always followed my intuition and desire to create my own personal style – even if it is not fashionable. I like to be an anarchist…to provoke if possible. The most important thing for me is to have meaning in my work – not to be purely decorative. If my work can attract attention for be reactive (not necessarily attractive), then I am happy with this achievement.

Collections have been a part of your work throughout your career from Still Life in 2009 and to your current work – discuss.

I started collecting found objects when I moved to rural Victoria and commenced my PhD in 2007. I think everyone is a collector; we all have collections of one sort and another. My collections of found objects are usually organic, and needed to be preserved, and later arranged in Still Life compositions and installations. Inspired initially by an ancient Greek mosaic “The Unswept Floor” 3rd century BC, this ancient artwork has become a reoccurring theme in my work. It is a metaphor for the things we take for granted, that are often overlooked. During this period, I also made collections of porcelain detritus – small handmade organic forms which I had incorporated into my installations. I collected furniture and boxes to display my collections – a contemporary “Wunderkammer” or cabinet of curiosities. 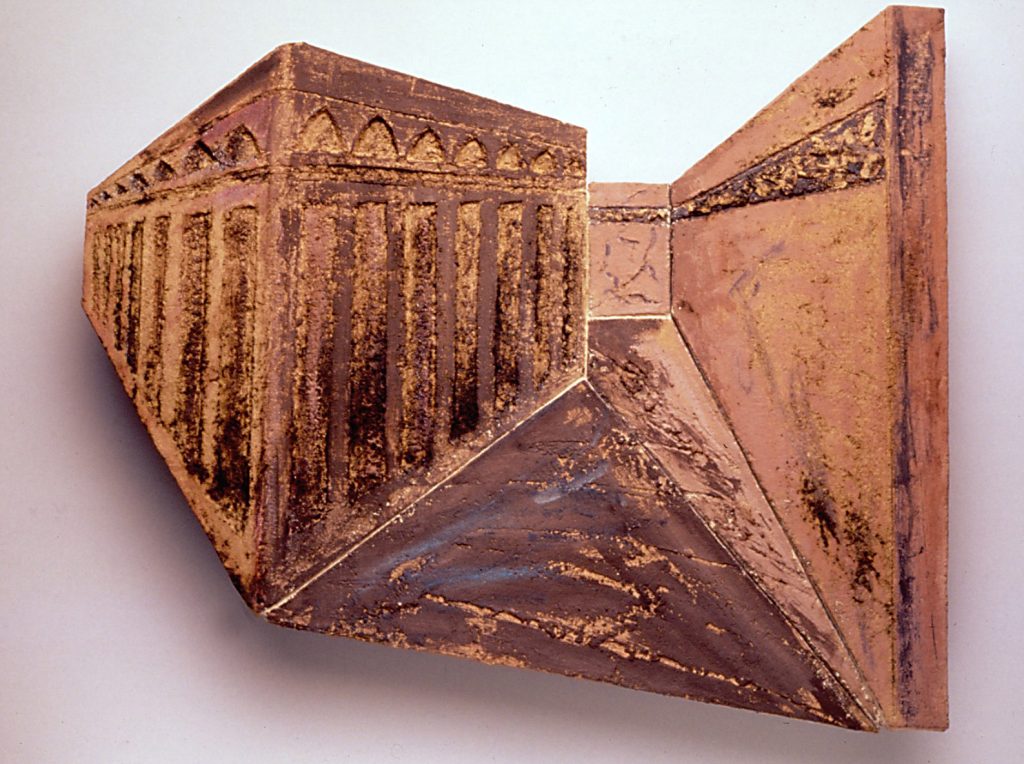 Comment on the political statement underlining your work in Asia’s Food Bowl 2018 and Frackoff 2018.  Also, how important is it for artists to bring political situations to the public view.

I am always frustrated by politics, especially when it comes to dismissing the environment for political and capital gain. Our ecology is so fragile, and I fear losing its battle against our political systems. I see this as a blight on humanity.

My two recent installations are exhibition proposals – which have unfortunately never been exhibited. I believe there is a fear in the art-world in general of being politically motivated. Asia’s food bowl is a collection of 200 empty porcelain bowls in the form of Australia’s coastline – It represents Australia’s unrealistic political/capitalistic dream to feed Asia. Frackoff is a depiction of the fragile nature of the environment – small fragile pieces of white organic objects resting on plastic grass sprayed with oil. It is my way of telling our politicians to stop coal seam fracking, which is highly polluting and destructive to the environment – but somehow keeps popping up on the political agendas of many countries, including Australia. I see both these installations as still life artworks. The hand-made bowls in Asia’s Food Bowl are not fired and will break down to become earth again. The handmade organic forms & plastic grass in Frackoff will last forever – once ephemeral, now eternal. I think of myself as an environmentalist – and as such must be proactive. Art is a great vehicle for reaching people, making them take notice. 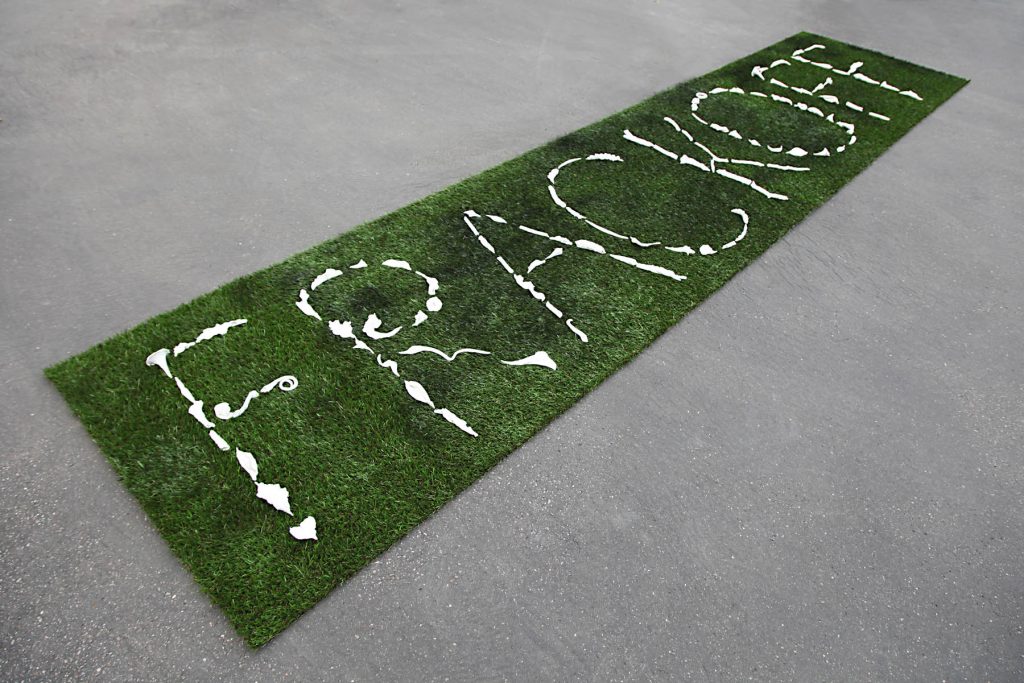 You use many mediums how do you balance this in your work?

I use many mediums to create my artworks because I don’t like to be recognized as a ceramicist per se.  The more I began to incorporate mixed media into my artworks, which is a bit of a taboo in ceramic circles, the more I enjoyed the different processes and outcomes – the idea is quintessential for me – not the material. 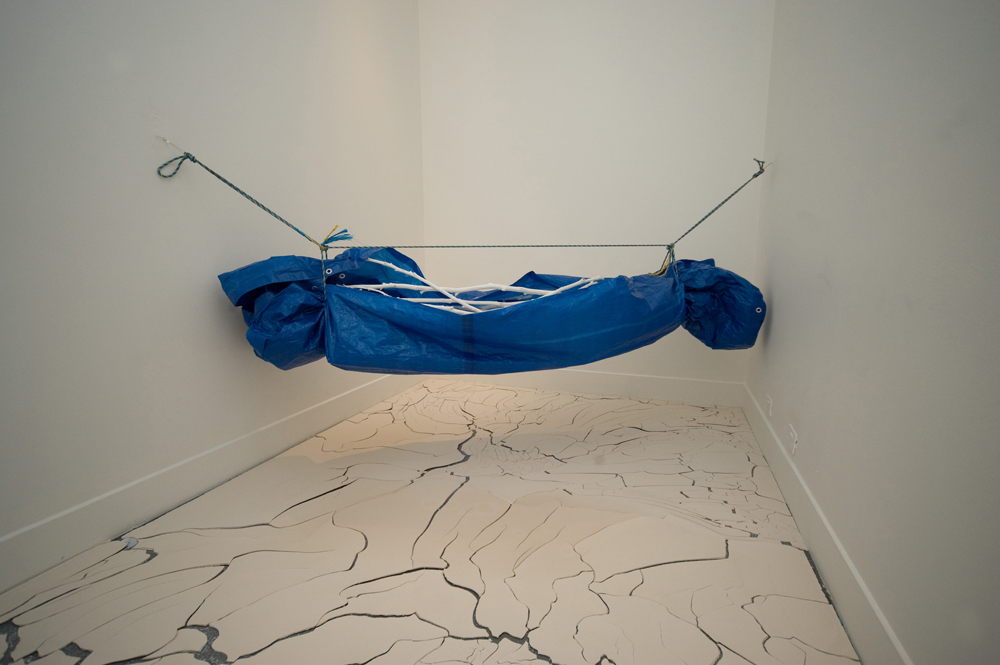 Working thematically allows me a freedom to work organically, in a non-constructed way of thinking. I enjoy working with photography , and mixed media as much as working in ceramics, but ceramics is a material that always challenges me, and intrigues me – the alchemy of earth, fire, air and water. “We shall not cease from exploration, and the end of all our exploring will be to arrive where we started and know the place for the first time.” T.S. Elliot.