Robyn Stacey uses historical collections by metamorphosis, into photographs.Zoneone Arts is delighted to bring Robyn Stacey to you... 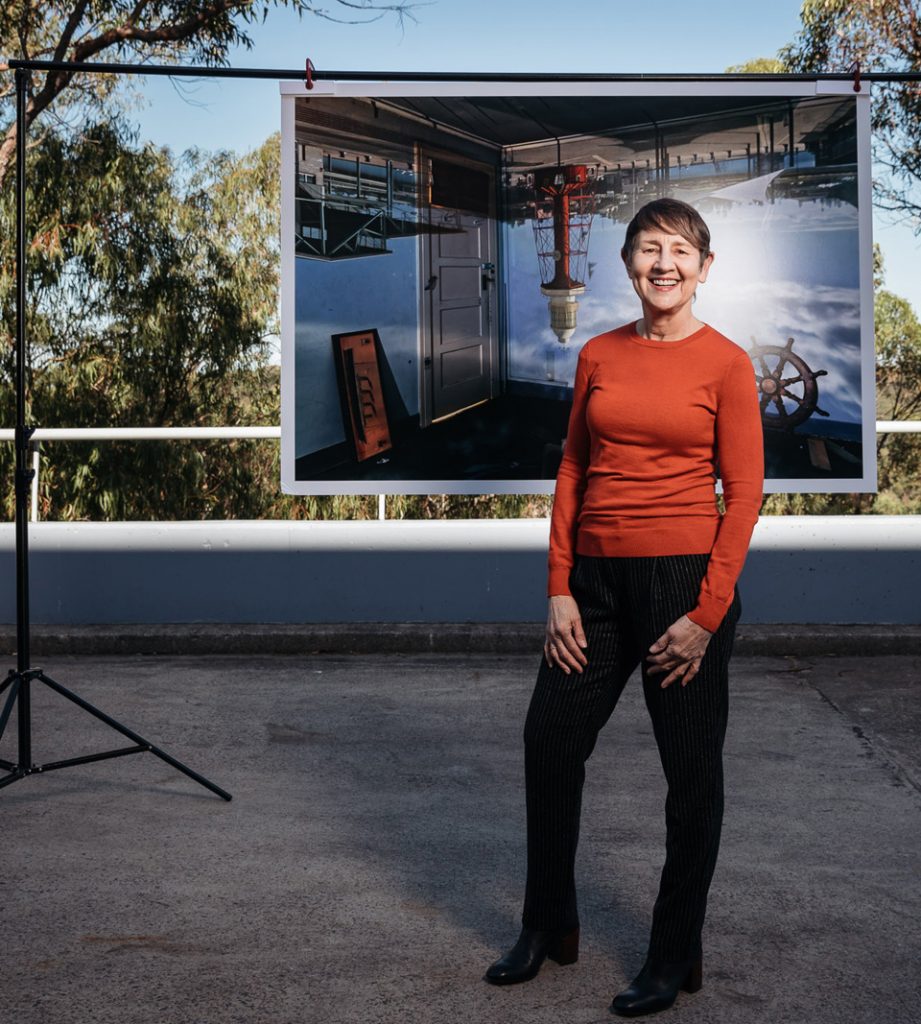 What lead you to still life photography?

When I started working with historic collections the still-life tradition provided a working methodology to tackle their huge size and diversity. The four collections I worked had holdings of over a million artefacts consisting of specimens, objects, ephemera, and even properties, some collections named and categorised in Latin exclusively, so I needed a plan. 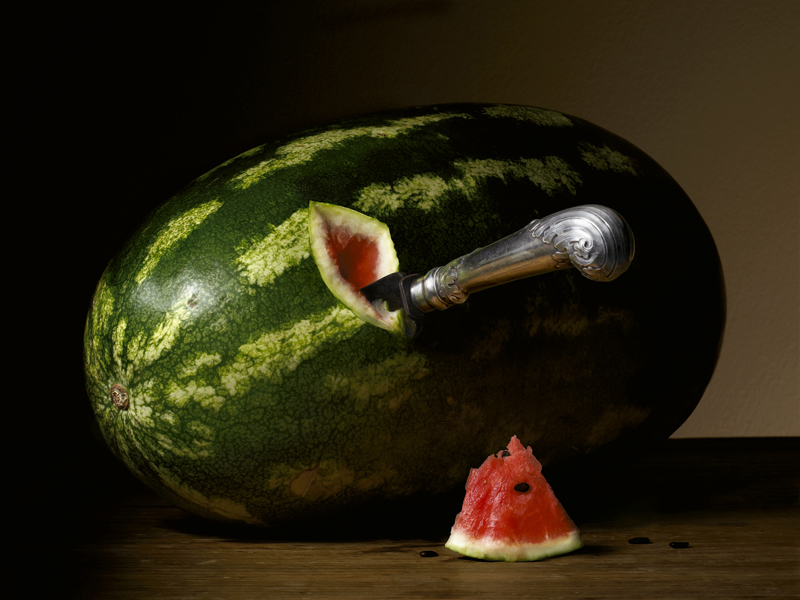 How has historical – still life painting influenced your work?

If you want to understand composition, still life is a great teacher. The compositions and the lighting in the best still life are a tour de force. The still-life qualities of rendering detail lovingly and creating a powerful mise- en-scene through lighting lend themselves brilliantly to photographic interpretation. The sharpness of the lens, and the control over lighting allows the photographer to reveal detail and invest both simple and intricate compositions with a heightened reality.

You state, “Still life is meant to be read” use this statement along with a photograph to explain the full meaning behind the work?

This quote offers a good insight  into that statement “…Still life images captivate us with their close-up views of objects no longer living but far from lifeless. Yet, the sophistication of this genre hardly exhausts itself in the breathtakingly realistic reproduction of widely differing surfaces. On the contrary, every pictorial element can also convey some religious or moral content or serve as a reminder of time’s irreversible trickling…” 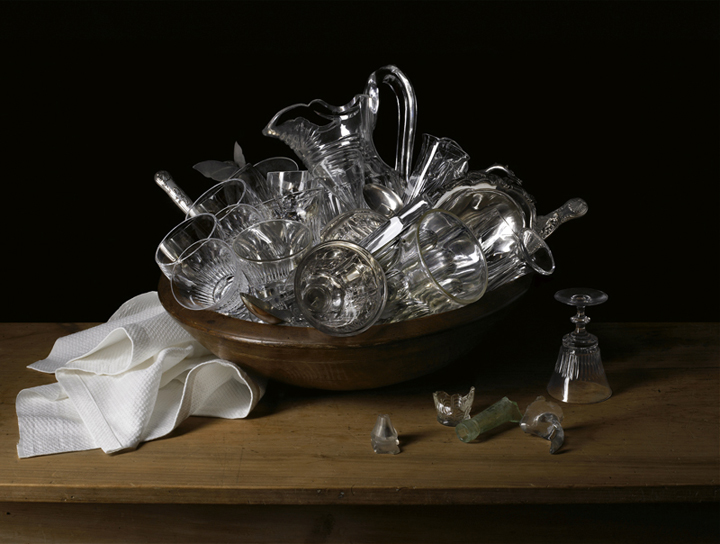 The symbolic codes of the still life genre pose the recurring philosophical questions about beauty, truth, and wisdom, Miss Eliza Wentworth’s Glassware as well as being a particular set of glassware also references the fragility and precariousness of life. In the still-life tradition glass, particularly shattered or broken glass, refers to the frailty of life, but the still-life composition also served to demonstrate that by preserving the real object via an image permanence can be lent to the most fragile.

Expand on your approach and work processes when dealing with  historical and scientific collections.

I began working with historic collections in 2001 with no particular aim except to produce a single exhibition. Both the exhibitions and books that have flowed from the initial research have naturally segue-wayed into each other covering the period from first white contact to the end of the nineteenth century.  Each collection had its own challenges but with each of them I tried to minimize the handling and transportation of the objects to the studio. Sometimes the material couldn’t be moved and I had to photograph in situ, setting up a mini studio in the space. For example all of the Beau Monde images were shot in the Macleay Museum because nothing could leave the building.

I initially researched each collection, the history behind it, what’s significant about it, and tried to view as much of the collection material as possible with a curator or collection manager. At this stage making only lo-res digital files of everything in situ so that objects or specimens don’t have to be moved. This process enabled an overview of all the material in the collection to be developed, and an archive created that could be used to cross reference different parts of the collection and as a store of useful references to be used as the project developed. Research is undertaken into the historical imagery, style of compositions in vogue at particular periods etc., which could be relevant to constructing the final images.

I then decided where I wanted to start with the collection and what the first few images could be. I usually started with the more elaborate set-ups.

You have used your work and books to expand the availability of early Australian collections to the general public.  Discuss.

Herbarium  the first book is based on the scientific collection at the Royal Botanic Gardens Sydney and was the first book with the author Ashley Hay. Starting with Banks and Solander arriving at Botany Bay on the Endeavour with Cook in 1770, Herbarium documents the plants that botanists, teachers, clergy, and hobbyists collected when they first arrived in Australia. Everyone in the colony collected and Saturday was known as Collection Day. In the Northern Hemisphere people believed a second act of creation had taken place in Australia so strange was the flora and fauna here. Specimens and plants were collected to be sent overseas which signifies the importance of the indigenous flora and fauna to the rest of the world.

Museum is based on the Macleay Museum and Macleay collections held at Sydney University. The earliest component of the Macleay Collection is its’ spectacular natural history collection housing a fantastic repository of Australian specimens. The Macleay collection is one of the few collections in the world that span all continents and most countries, the earliest specimen dating from 1756. It has a repository of more than 5,000 type specimens (the specimen from which all others are named) and more than 600,000 specimens in the insect collection alone making it internationally significant. 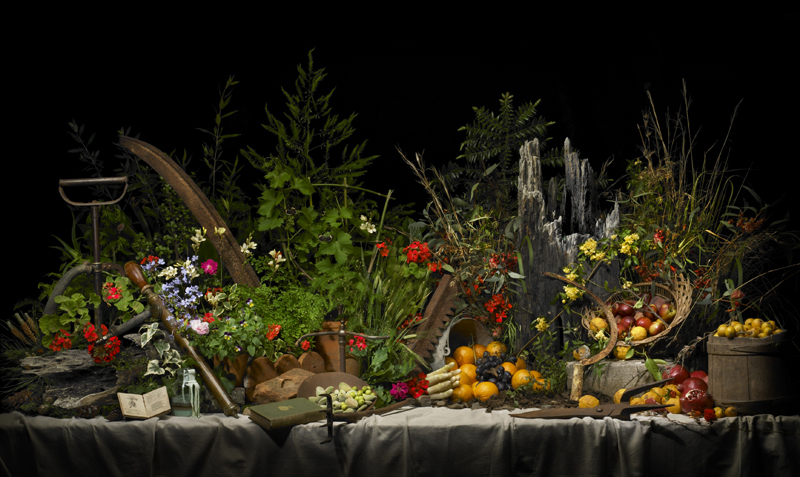 Rouse and the Cumberland Plain

House was based on a number of Living Museum properties and collections which focus on various domestic environments, from a farm at Rouse Hill to a Harbourside Palladian villa. Reflecting the habits, thoughts and aspirations of society in the nineteenth century colony the Living Museum’s collection bears witness to changes and trends in the community and tell us who we are and where we have come from.

Take a particular photograph, and briefly explain the meaning of the groupings of the items and the importance of them to the collection. 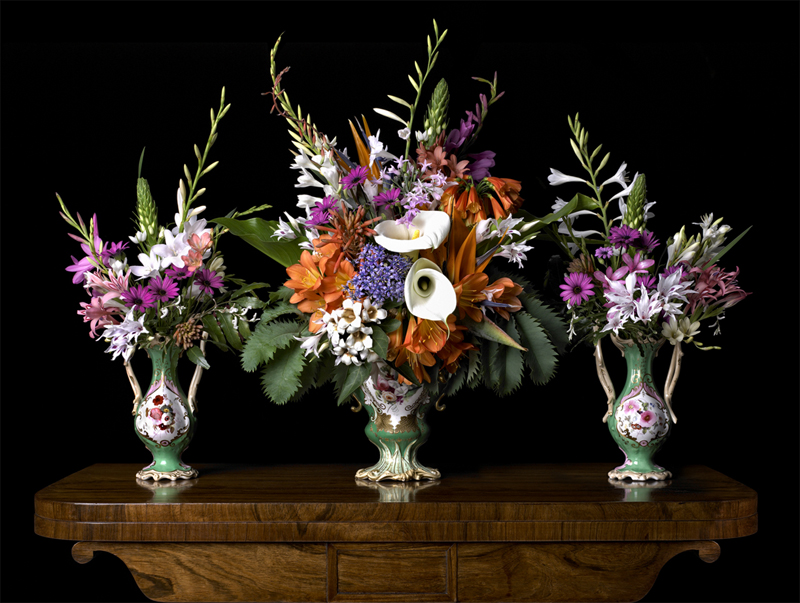 A garniture is a number or collection of any matching, but usually not identical, decorative objects intended to be displayed together. Complete sets of garnitures are exceptionally rare. A status symbol between the 17th and 19th centuries, garnitures later fell out of fashion. Sets were damaged or broken up and individual pieces sold off; few complete sets now exist, and even fewer survive in their original settings. In 1769 Wedgwood described the public’s insatiable appetite for vases as a ‘violent Vase Madness’ and by 1775 he made over 500 shapes available. They were never made in sets of twos, fours, or sixes, they were always made in odd numbers, of three, five, or seven. Recently there has been a revival of interest in Garnitures as demonstrated by the exhibition Garnitures vase sets from National Trust Houses held at the Victoria & Albert Museum in London (October 11, 2016 – April 30, 2017).

The floral arrangement of South African exotics, including arum lilies, clivia and watsonia flowers, and melianthus, are typical of those seen in early colonial views. The vignettes painted on the vases similarly depict blooms of contrasting forms and colours. Highlighting botanical diversity was fundamental to the Gardenesque style of planting popular at the time. All the flowers used in the composition are nineteenth century varieties, not contemporary hybrids.

Tell us the story behind ‘Leidenmaster 1’ and the specific collection this comes from and your involvement.

When I was undertaking a residency at the Herbarium of the Netherlands, at the University of Leiden  I discovered that the book still life genre originated in Leiden and was at its height around 1620-1640; given Leiden’s significance as “the home of the book still life” it made sense to draw upon this genre during my time photographing the collection.

Leidenmaster 1 depicts some of the oldest books extant today. Many of these books also happen to be herbaria, containing plants pressed between their pages. Because books were portable it made them perfect for horseback travel and enabled people to collect as they journeyed – most early collectors were from the military, clergy, and doctors, because they were educated and they often travelled. 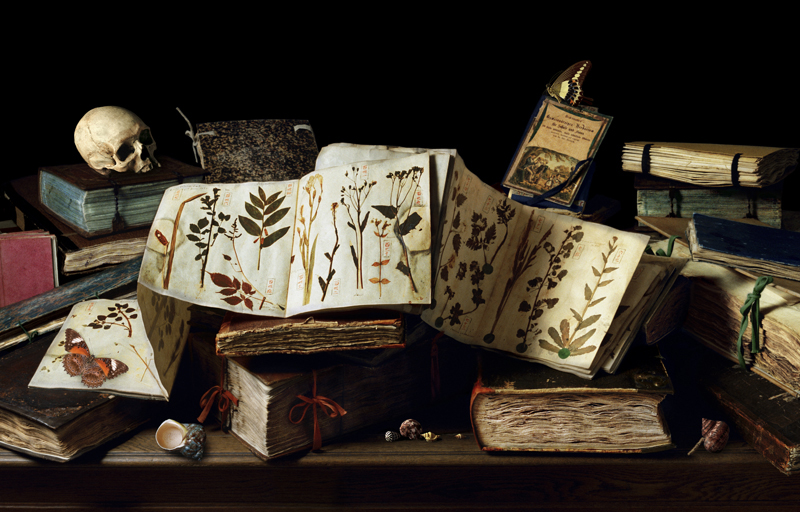 To understand the significance of the collection I have described some of the books in the image.

The book with the orange spine centre foreground is the Rauwolf herbaria, the finest among the very rare, still preserved sixteenth century herbaria. There are spoils of war from the King of Sweden, a Japanese scroll from 1860s, and some of the earliest plants collected from the middle east. The book with the pink ties may be the oldest Herbarium extant in the world. The Herbarium bears the title En Tibi Perpetuis Ridentum Floribus Hortum, which freely translated means as look here a garden in which the flowers smile upon you forever. The book was made in Ferrara (Italy) around 1542-1544. It is generally assumed that the idea to conserve plants by drying them under pressure for the use of scientific study originates with Luca Ghini around 1540.

Explain the ‘Beau Mondes’, and the convex image? 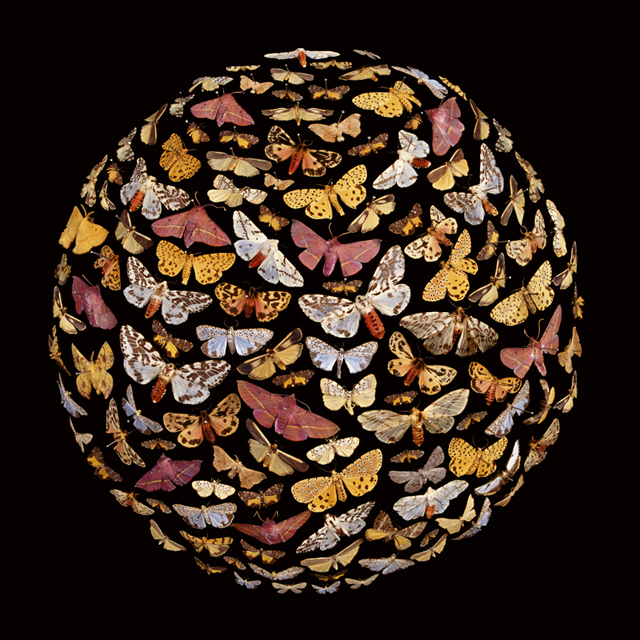 The three Beau Mondes are a response to the globally significant Entomology collection housed in the Macleay collection. Some of these specimens date from the original collection that Alexander Macleay brought with him when he arrived as Colonial Secretary to NSW in 1826. During the nineteenth century Entomology was concerned with taxonomy, identification and classification, looking for similarities and difference between species. Specimens were arrayed on graph paper in perfect squares, displayed row after row, in endless columns. I wanted to emphasise the display and pinning of nineteenth century Entomology as well as reference the Victorian gothic hence the black velvet ball that the specimens are pinned on. 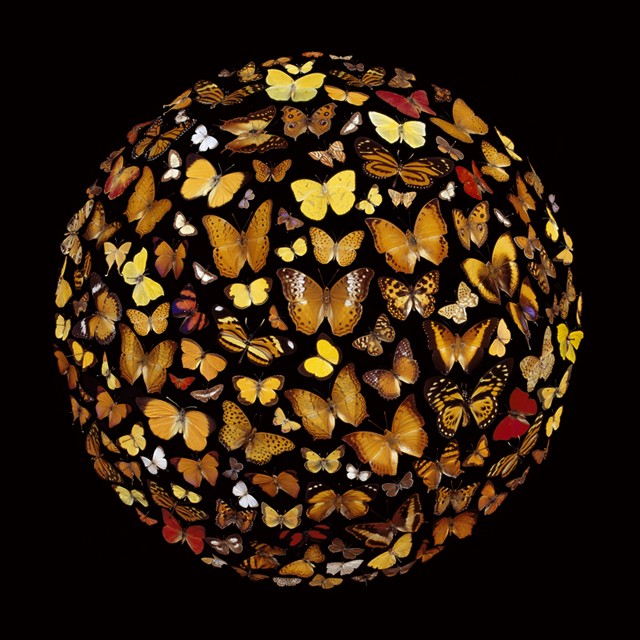 Can you briefly explain the historical importance of Australia to collectors in the 19th century both in Australia and abroad?

In the late eighteenth century there was an explosion of interest in Europe in the newly discovered plants and animals from the strange and ‘topsy-turvy’ land full of ‘antipodean oddities’ known then as New Holland, Nouvelle Hollande, New South Wales, or just Botany Bay. These plants and animals were so rare and difficult to procure that they were looked upon much as visitors from the moon would have been. In the eighteenth and nineteenth centuries anyone who was anyone had to have a garden and /or a collection that included Australian plants and animals. From the King of Bavaria to Josephine and Napoleon, the flora and fauna of Australia created a popular and scientific upheaval in Europe. And anyone who had the time and money travelled here, making the early settlement in Botany Bay more sophisticated and cosmopolitan than might be expected, Palladian villas and Neo-Gothic estates doted the harbour while princes from Sri Lanka and European adventurers and noblemen came to trade and explore the country.

Using ‘Walnuts’ and Gorilla Skull discuss the difference in the two approaches to composition in the photographs. 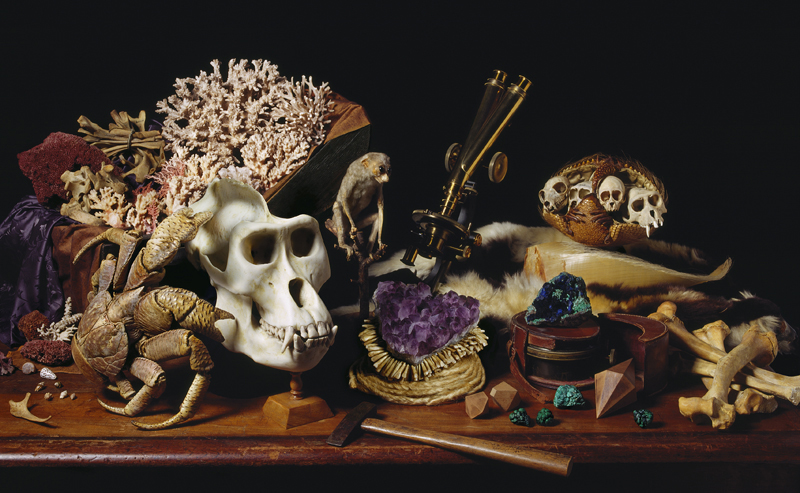 The Dutch Still life tradition solved the problem of how you situate the giant purple jewel, the Gorilla Skull and the necklace made from human teeth next to each other in one composition. Gorilla Skull references the exotic specimens held in the Macleay collection and the three generations of Macleays who collected exotics from dealers and Emporiums, employed their own private collectors, and organised their own expeditions. The aim was to build a collection that reflected taste, accomplishment and curiosity. While the Dutch Still life tradition is the exemplar when it comes to dealing with excess in a composition, Walnuts demonstrates something completely different. Based on the Spanish Still life tradition that was more interested in elevating the overlooked, taking what could be considered mundane or commonplace and making it the focus of the composition with very little embellishment. The Walnut in still life also references the body of Christ, and the Trinity so can appear in the very complex still life compositions as well.