Robert Kelsey, ScotlandAs a landscape painter I am fascinated by the way light falls on and alters the environment. Light is constantly changing and altering the atmosphere of a view.Zoneone Arts is delighted to bring Robert Kelsey to you… 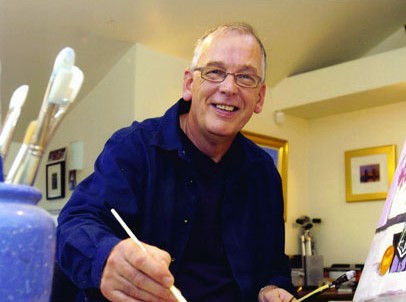 Can you expand on your involvement with the Paisley Art Institute?

I have been involved with Paisley Art Institute for over 40 years. The Institute hold an annual Open Art Exhibition and this was one of my major exhibiting opportunities in the early days. As years went on the Institute grew to be one of Scotland’s biggest and most successful Open Art Exhibition. I served on the committee for many years and I am pleased to see “The PAI“ thriving today. In many ways being an exhibitor at this show brought the opportunity to be spotted by many of the Art Dealers from major galleries who visited the exhibition to talent spot. 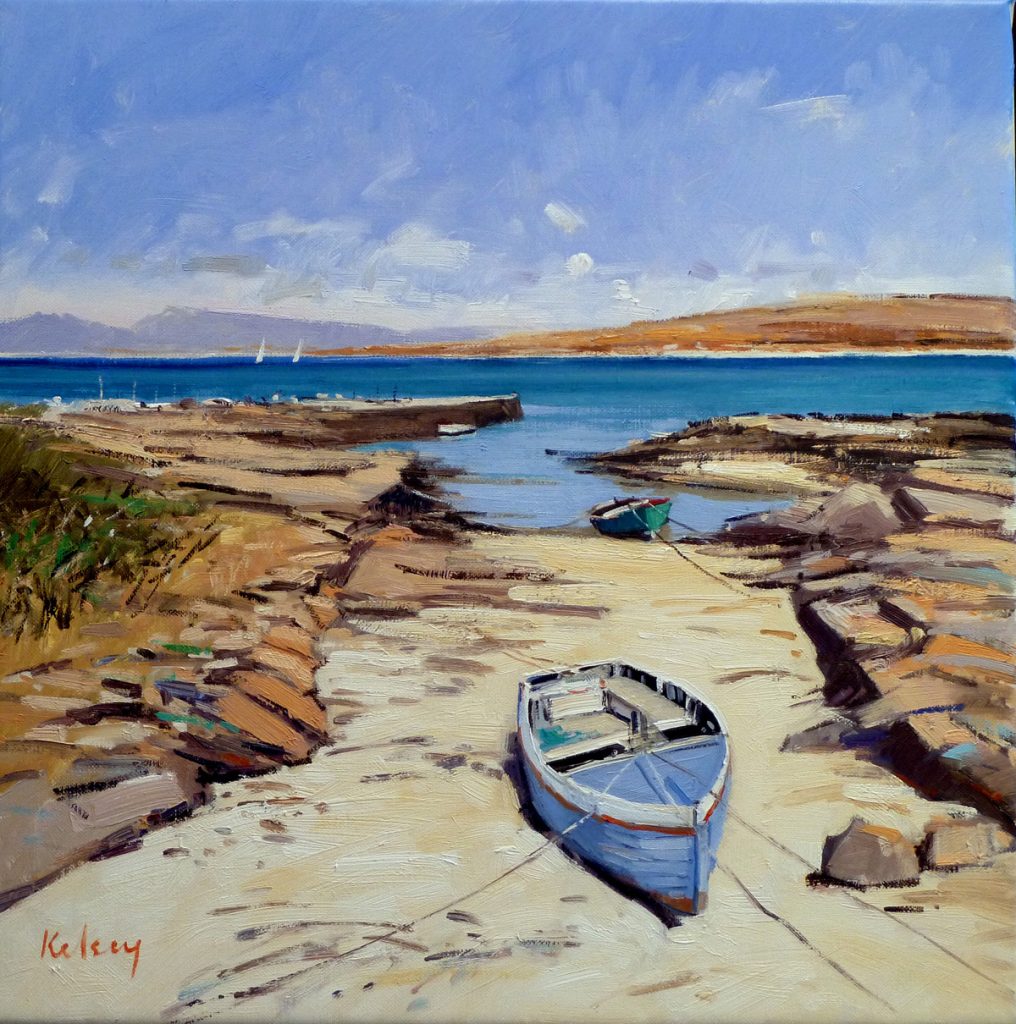 You trained at the Glasgow School of Art how has this influenced your art till now?

I was very lucky to have studied at the famous Glasgow School of Art in the late 60’s when it was an Art School in the true sense of the word. The syllabus was superb with the first two years being a wonderful general course of practical and liberal arts and history. This was perfect for a young man of 17 fresh out of school. During this first two years I studied under a very conservative elderly tutor who believed in teaching in the old tradition of drawing from the cast, studying perspective and learning about composition. Skills which have stayed with me all my life.

After two years general course I entered the Drawing and Painting Department and studied under a group of young men who were carving out a career as painters. I was in awe of these artists and they had a great influence on my creative energy. The inspiration I received from Alexander Goudie and David Donaldson has dominated my painting style to this day.

Due to your location in Scotland you truly get four seasons every year.  Can you show us the seasons using four paintings? 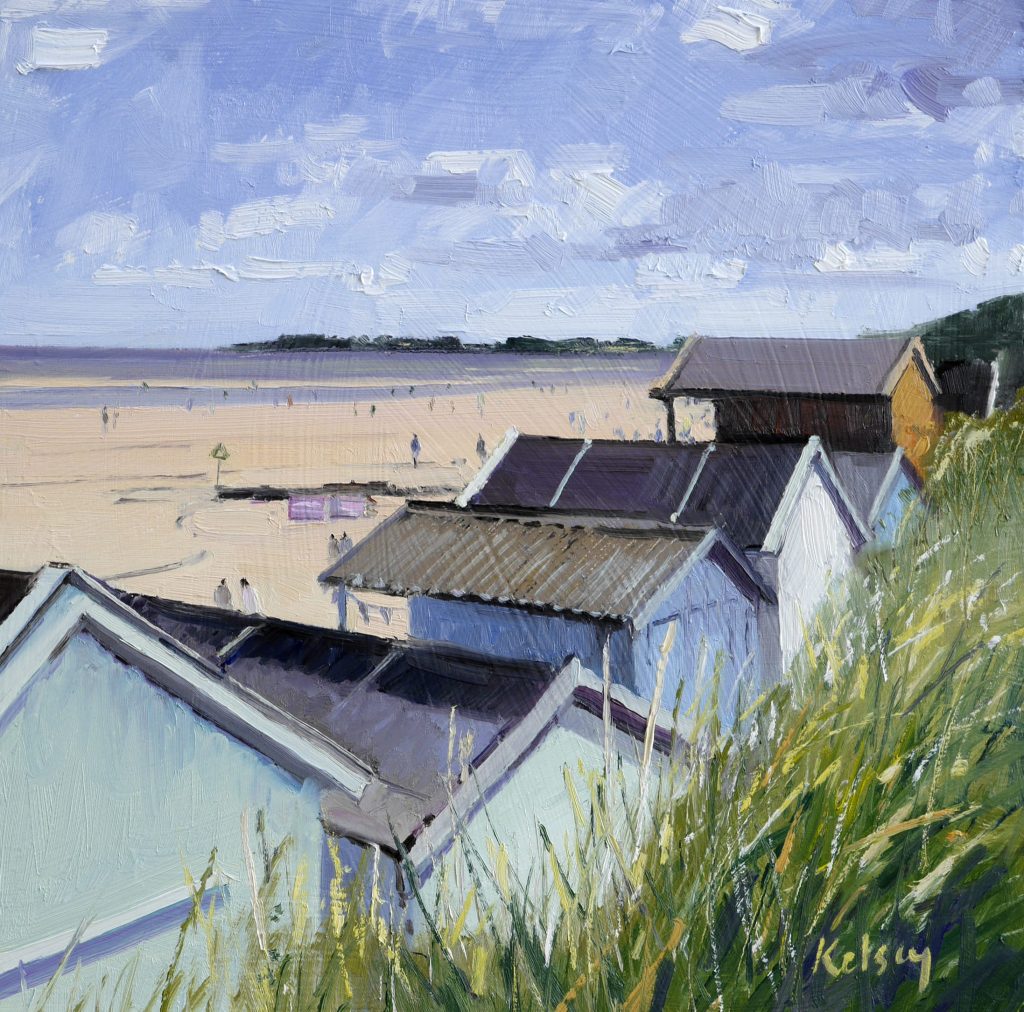 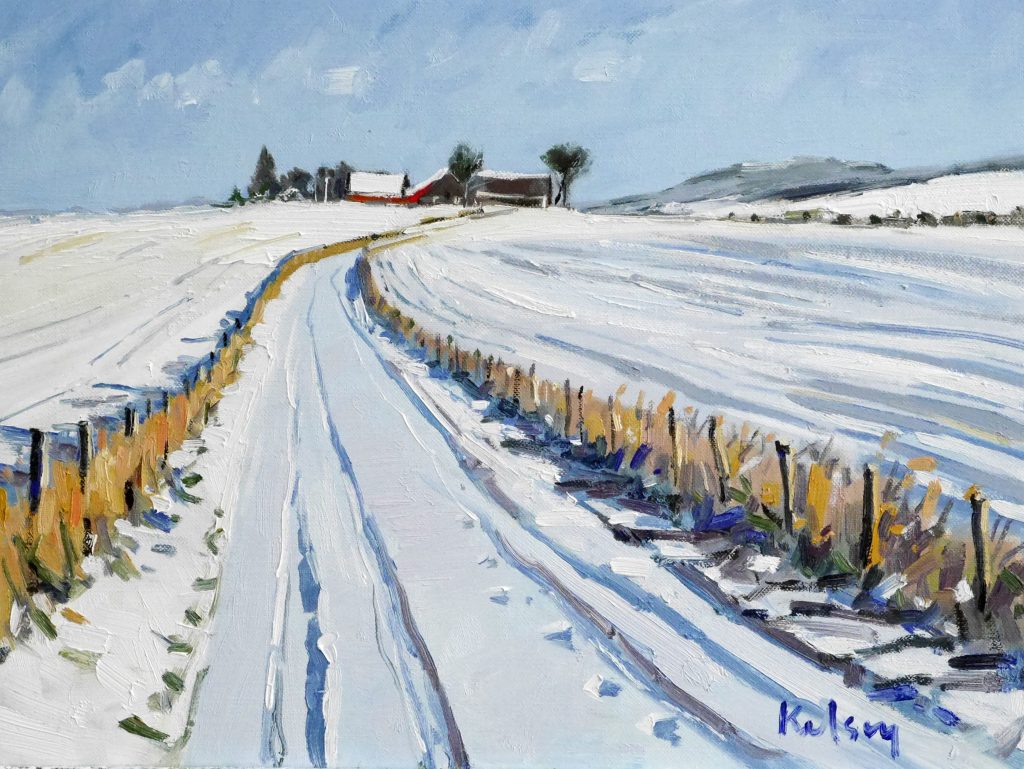 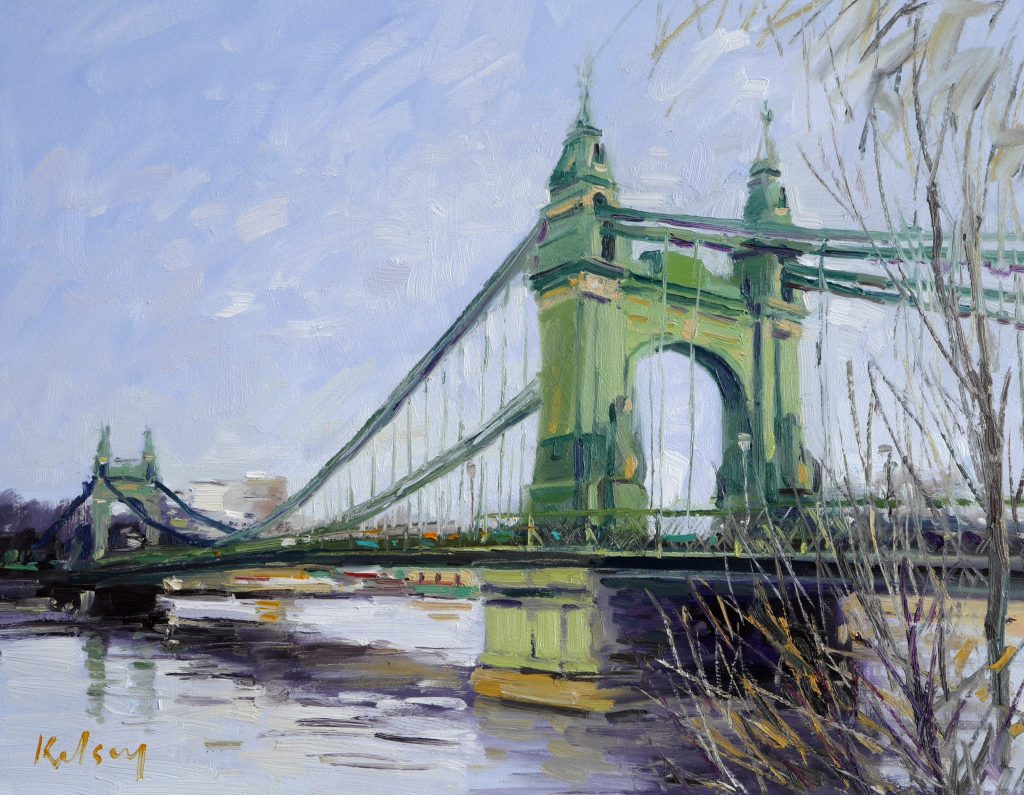 For many years you taught art – during this time did you do much personal art?

I started teaching in a Six Year Comprehensive School, on the banks of the Clyde near the ship building town of Greenock straight after Art School at the age of 21. My Art Career had not even begun and could have withered and died at that point. What saved it, and me, was the attitude of the Principal Teacher of Art in the school. He wanted his teaching staff to remain creative, and allowed us to continue to produce our own art works alongside the pupils we were teaching. For a young man, just married and living in a small apartment, this was perfect. I continued to develop artistically, producing paintings at my desk in my classroom which I could then frame up and exhibit in local exhibitions, like Paisley Art Institute. We even held several Group exhibitions in Greenock Art Gallery as the Teaching Staff of the School.

This was great experience for a young artist but more importantly allowed me to continue to paint alongside my teaching career.

Your comment, ‘Light is generally the most important quality’ discuss.

As a landscape painter I am fascinated by the way light falls on and alters the environment. Light is constantly changing and altering the atmosphere of a view. Light affects the way a view appears. If the light is from behind the viewer the scene is floodlit and clear, with strong colours. If the same view was seen facing the light it would appear silhouetted and grey in colour. Light is even more dramatic at the coast where it can illuminate and reflect off water surfaces. 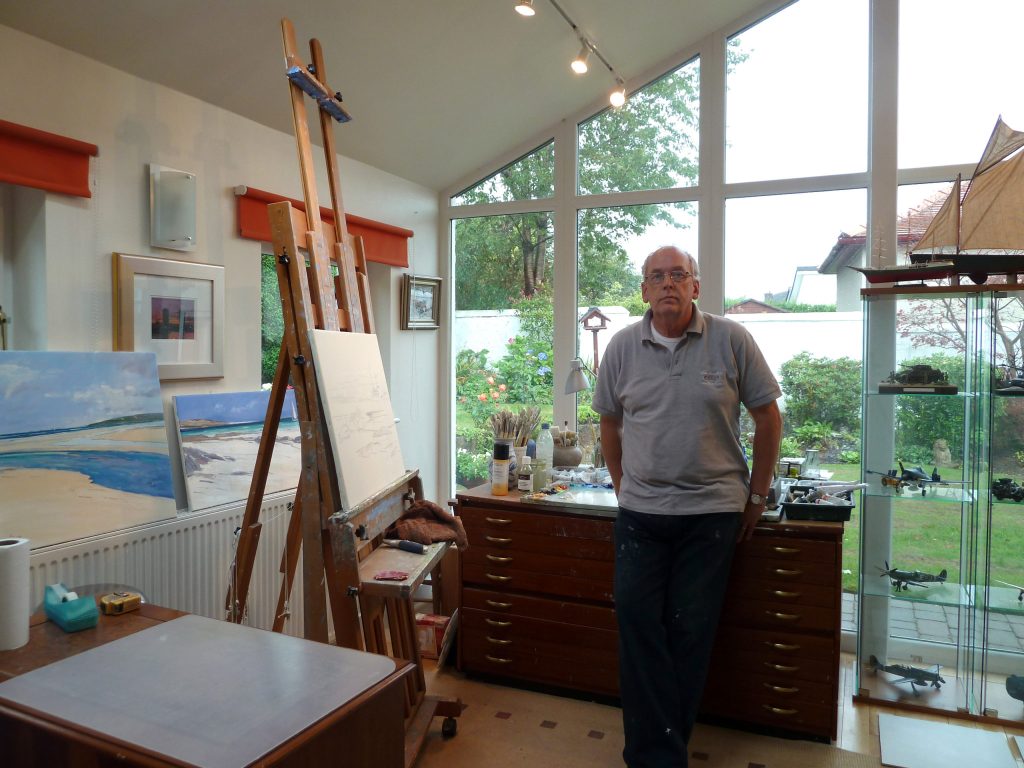 How do you prepare for a painting?

From several field trips per year I accumulate sketches, watercolour notes and photographs which I use to work up into completed paintings in my studio.

You often paint in remote places expand on this using 1 or 2 paintings.

I am drawn to the West Coast of Scotland and even beyond this to the remote chain of islands called the Outer Hebrides which sit on the extremity of the Scotland and the Atlantic Ocean. These beautiful remote islands have always been an inspiration to me. My grandparents moved from England to the remote island of Barra in 1900 to become teachers, and my father was born on Barra in 1906. This is my favourite Hebridean island and is a mixture of rocky coves and vast flat sandy beaches. 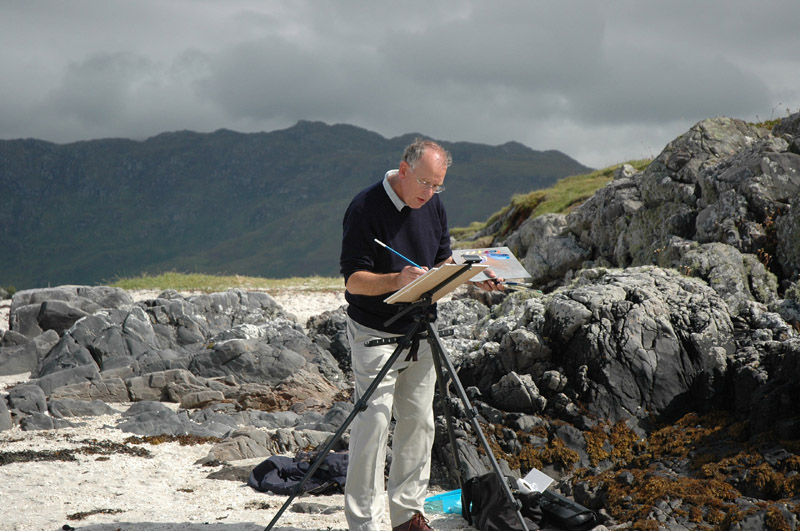 Another favourite painting spot is found near the village of Arisaig on Scotland’s north west coast. From the beaches here you can stare at the remote islands of Eigg and Rum which sit on the horizon. 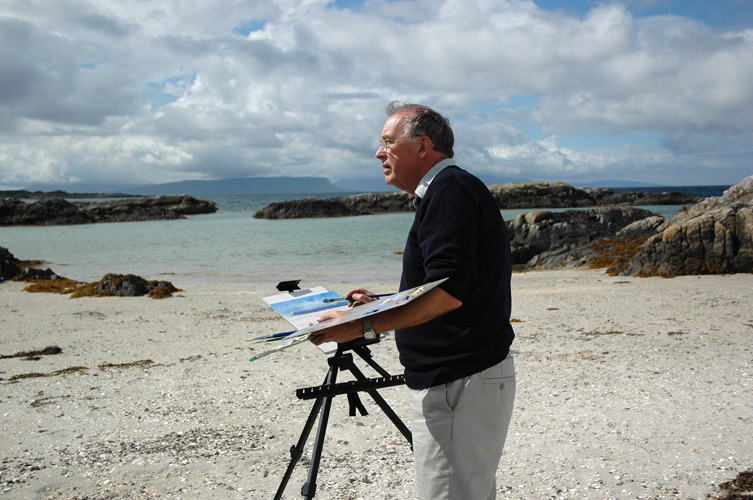 While you paint in remote places, your art has been sold and taken to many places. Can you name a few of the remote places they have gone to?

When you sell from a gallery it is not the custom of the gallery to tell you the name of the purchaser. Nevertheless, you do eventually get to meet some of your collectors. I have Corporate Collectors all over the world as far afield as London, Singapore, New York, Canada, France and Italy.

‘I love to put up a large white canvas, mixing some paint and applying that first big area of colour’.  Explain your need to paint.

This must be something built into my genes as I have been artistic from as far back as I can remember. I think my Grandmother, the one who moved to Barra at the start of the 20th century, was artistic and I claim my art genes from her.

My main media is oil paint with which I have a great relationship. It feels as natural as breathing for me to mix oil paint on a palette and apply this boldly to a white canvas. 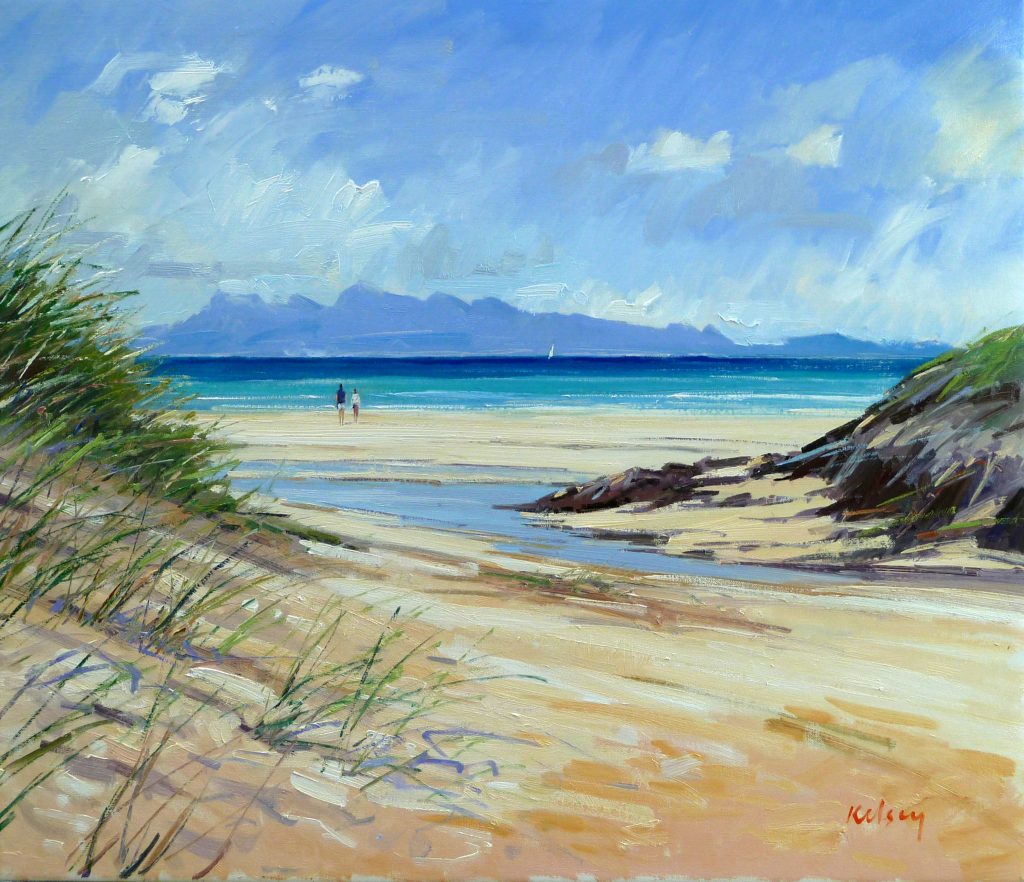 What a milestone; your 21st Solo exhibition with Thompson Gallery, comment on this long relationship.

Every artist dreams of living from his work and being shown in a top gallery. I was no different from this dreamer way back in the 70’s when I was a young teacher. I never once thought that someday I would become a full time professional artist.  As I explained earlier, if I hadn’t been given the opportunity to continue to paint at this vital moment in my life I would not have been painting and exhibiting 25 years later when Thompson’s Gallery invited me to exhibit with them in their Mayfair Gallery in London. 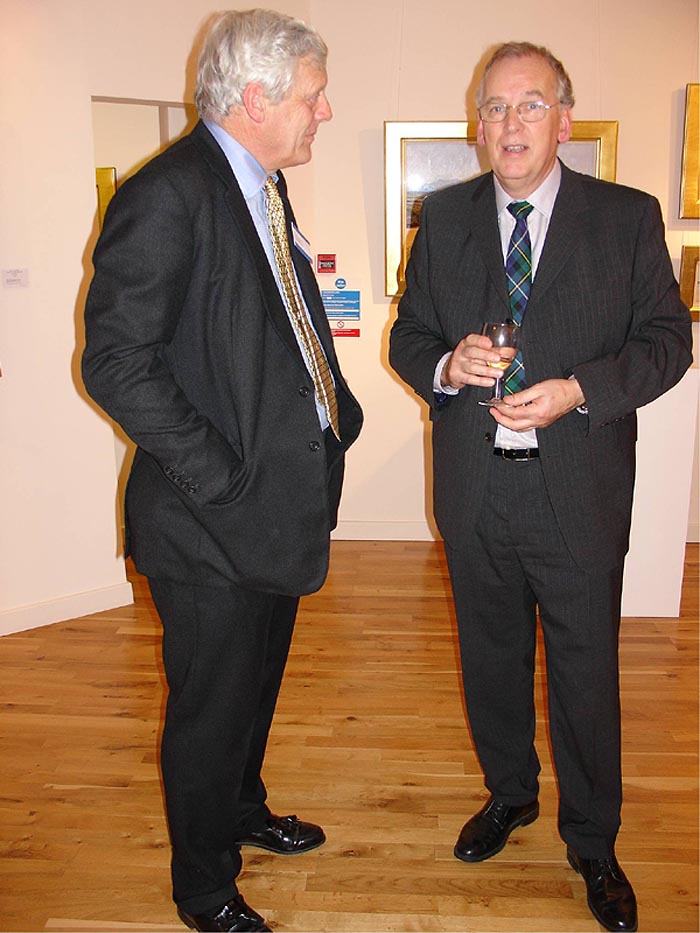 At first I was one of a stable of Scottish artists exhibiting in group shows. After a year or so Thompson’s invited me to have my first solo exhibition with them in 1994. This showed that they had faith in me to take on the huge task of painting for a large solo of 50 new works. I thrived on that faith and didn’t want to disappoint them.

My first show with Thompson’s let me see just how a quality Mayfair gallery operates. They produced a forty page fully illustrated catalogue, large adverts in Country life Magazine, and The Spectator, and more importantly, supplied a flood of collectors who wanted to purchase my paintings.

This was a dream come true. This first exhibition was a great success as were the others that followed over the next 25 years. John and Sue Thompson soon became more than Art Dealers and become good friends. My wife and I would frequently stay with them in their lovely home in Suffolk, and we got to know their family as they grew from children into young adults with children of their own. Their youngest daughter, Megan, who was only a small child of 8 or 9 in 1994 now manages Thompson’s Gallery in Marylebone, London.

In 2004 we were approaching my 10th anniversary of annual exhibitions and celebrated this with a quality show of 70 new paintings. The catalogue was a proper published book in a slip case, with a foreword by a top BBC Journalist and writer. We even managed to get articles promoting the exhibition in quality Homes and Interiors Magazines and better still a news item and interview on Breakfast TV with the BBC. 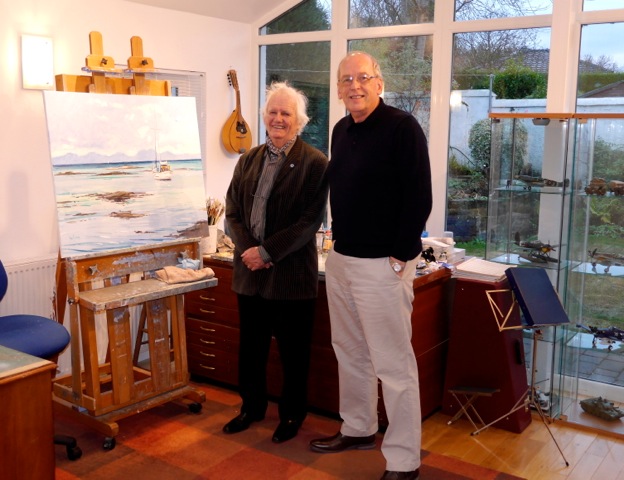 All this hard work and preparation resulted in a most successful exhibition with around 60 paintings selling in 10 days.

Eleven exhibitions on and we were celebrating my 21st solo with Thompson’s in May 2016. This was great fun, especially as many of the wonderful gallery staff I had worked with over the years turned up for the opening party.

Bay Attic is a company that sell Giclee Prints of a selection of my Paintings through their website.

I have always considered prints to be less important than my original paintings but can understand that not everyone can afford to spend large sums of money buying originals. When I was approached many years ago and asked to license prints of my paintings I was happy to do so. I have little to do with the production or distribution of the prints and only receive a modest copyright fee on prints I sign and number.

I have about 30 paintings which are available to purchase as prints and these are in signed limited editions of 250. These are Giclee Prints of the highest quality printed on thick paper with inks that will last a lifetime.

You often paint snow; discuss the technique you use for snow landscapes.

I like to paint in all seasons but do love the colours and contrasts of a snowy Landscape. The secret of painting snow is to introduce warmth to the picture. I do this by bringing in orange or browns with foliage and grasses. Warmth can also be introduced in the purple shadows cast on the snowy surf