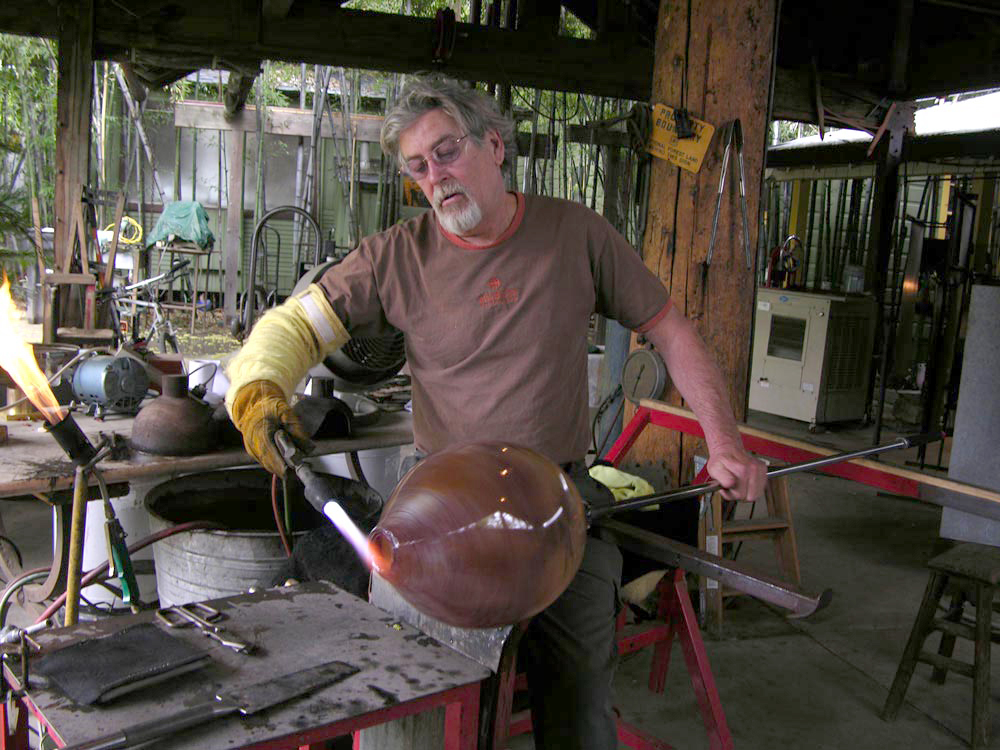 How did you first arrive at the idea of Jellyfish in your glass art?

It was during the early years of when Monterey Bay Aquarium was first opened, and I saw Pacific Sea Nettle Jellyfish floating in front of a brilliant blue background. I instantly thought about how translucent jellyfish are, the same as glass. The idea continued to grow from there. I experimented from 1989 till about 1994, constantly playing with it, then putting it aside for a bit, but always being drawn back. With the final motivation of the Monterey Bay Aquarium contacting me to create a jellyfish art glass piece to coincide with the opening of their new exhibit called, “Jellies Living Art” I was finally happy with and created what would be my first full production jellyfish piece, Moon Jellyfish. 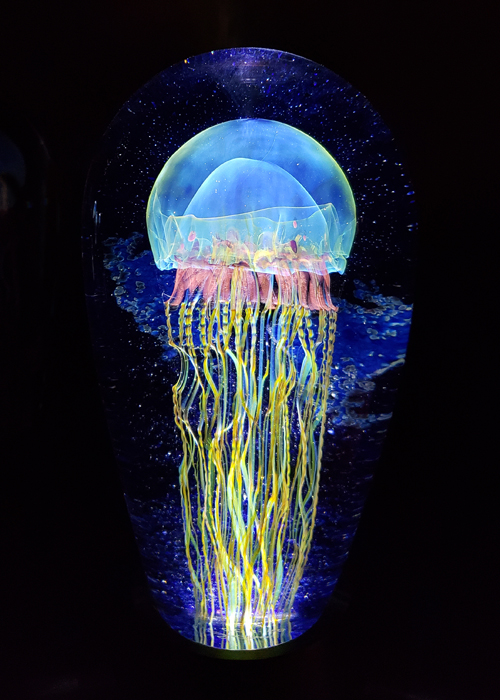 Discuss several of the ways you use jellyfish in your work?

We make our jellyfish in numerous different shapes and styles. First we make the standard upright shape in which they range from 4 ½” tall and 2 ½” wide to 15” tall and 7” wide. Then we also make the jellyfish in a double form which have two jellyfish intertwined over a sea bottom base that are usually 10” tall to 5“ wide. Lastly, we make the side swimmer jellyfish that depicts a single jellyfish swimming over a reef of urchins and sea anemones. in a round shape that we do in both a standard size of 4 ½” and a larger size of 6”. All of the above are encased in clear but we also make all the same pieces mentioned above in our seascape series, in which a background of mottled blues and greens are incorporated into the design. This gives people two different display options in each jellyfish style. 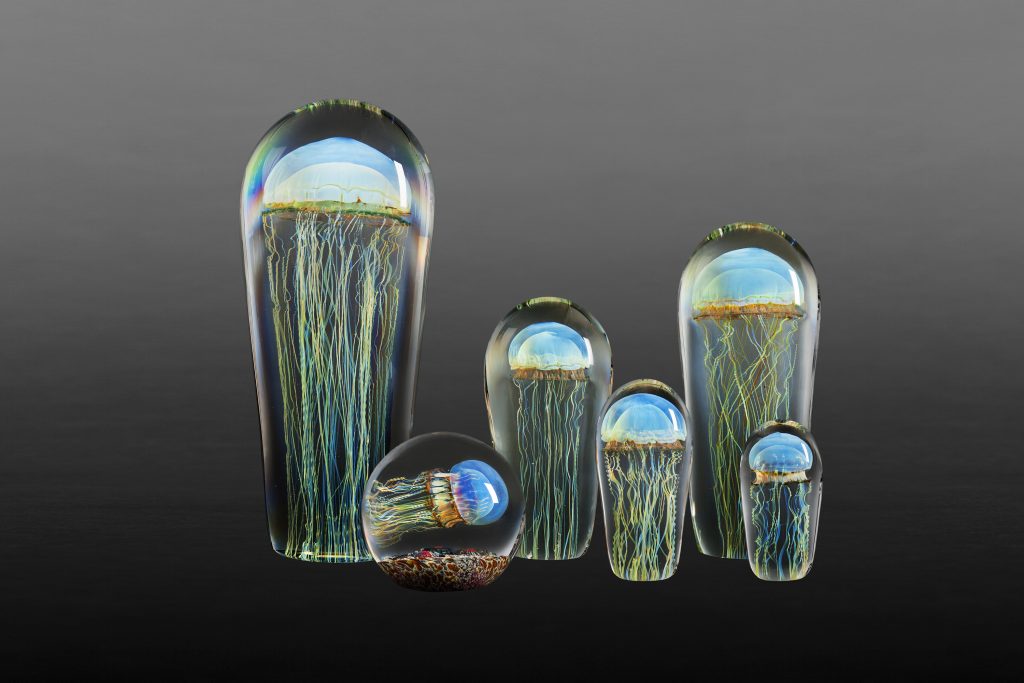 How authentic are they to actual jellyfish?

The jellyfish were never meant to be authentic replica of a jellyfish.  I took the various qualities of the jellyfish that liked, looked at various kinds that exist in the world, but put my own artistic vision on them.

Kokopelli is known as a fertility deity, an extremely popular cultural icon by many Native American tribes in the Southwestern United States.

Expand on the depiction of the humpbacked flute player.

We portray him in both his more widely known typical humpbacked flute player form and but also in one that we call backpack Kokopelli that has a more spiralled “back”.

What lead you to this mythical image?

Initially I started with more traditional European drawings, then eventually I moved towards doing more American based images. My focus shifted from astrological depictions of Native American lore and graduated to more popular images of their culture. During the 1970’s and 80’s I was producing a lot of these images for The Nature Company, a chain that would eventually changeover to be the Discovery Stores in the early 2000’s, so the more easily recognizable images of the Native American society did well in those stores. This made it so I produced more of those images over time.

Do you always have him on a stone coloured background?

That design, plus all our other petroglyph designs, are done on a brown toned background, mostly to give the impression of the image being truly carved in rock. That being said I have done them in red, in more multicolored pieces, as well as, in grey tones to give the impression of stone. I have been doing this series since the late 1970’s, in various forms, and have tried a wide variety of different colors and textures.

Where can he be seen in Southwest America?

In the Hohokam, Yuman and Ancestral Puebloans (those around the four corners area) peoples.

Do you provide the purchaser with information about your work?

Comment on how you capture nature, in glass especially vases?

Though I do use some modern equipment, mostly the century old traditions of glassblowing are still used.  For the most part similar tools, styling techniques and methods are still part of how I produce my work. My designs have always tended to feel more, free formed, which works well for all my style, especially in certain vase creations, like my floral designs as an example. Floral forms in real life are already unique and fluid, so the fact that I don’t use molds and that what you see in my work is just constant manual manipulation of the glass, in its molten, pliable state while it is being blown out, really suits that design.  Basically, since each piece is hand formed, no piece is ever exactly the same, just like flowers in the world. 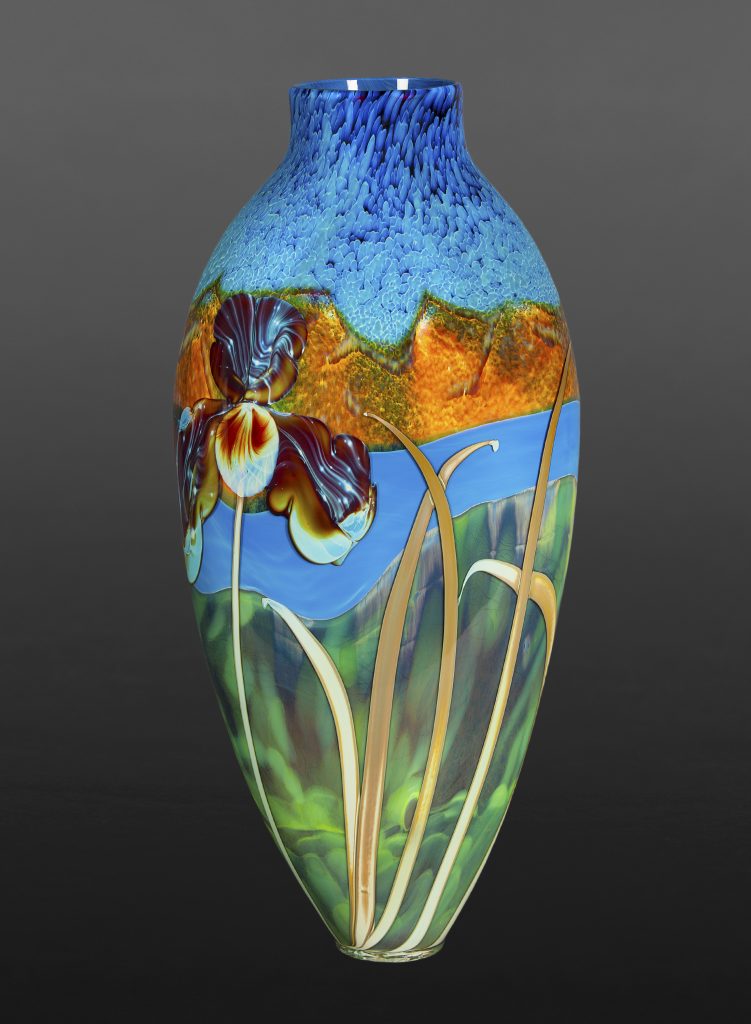 Are there certain colours in glass that are either difficult or easier to work with and why?

Physically, opaque colors are more unruly. Combination of different consistency of expansion and contraction of the colors makes it more malleable to use. That is the challenge to find colors that are workable together, this is part of the design process.

You have a team in your studio – discuss the varied aspects of their work. 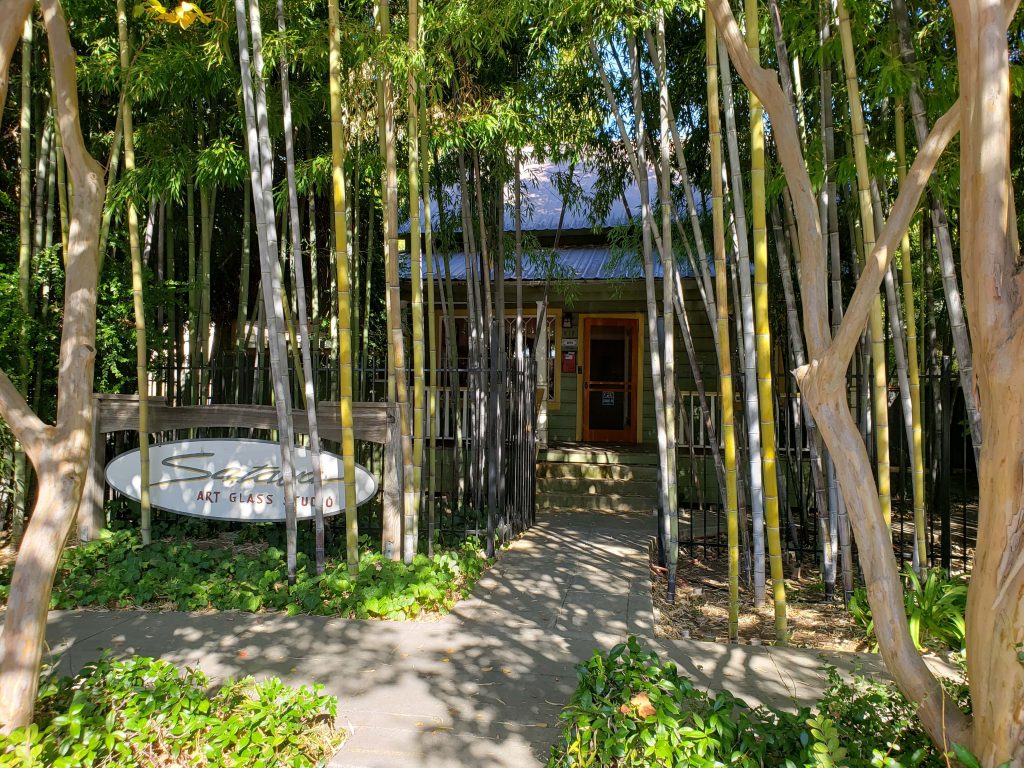 I have a crew of glassblowers that work with me in the hot shop, helping me to create my art glass, a cold work manager that grinds, polishes and finishes the pieces and a office/gallery staff that helps to sell and distribute my pieces all over the world.

Comment on the light base you have and explain who it works with your glass art?

We display much of our work both on and off light bases. The art glass that works best with them are our standard jellyfish shape, as well as, our petroglyph rocks and paperweights. They all are incredibly suited for being displayed with light coming from underneath.

Briefly discuss the process this piece has taken in your studio. 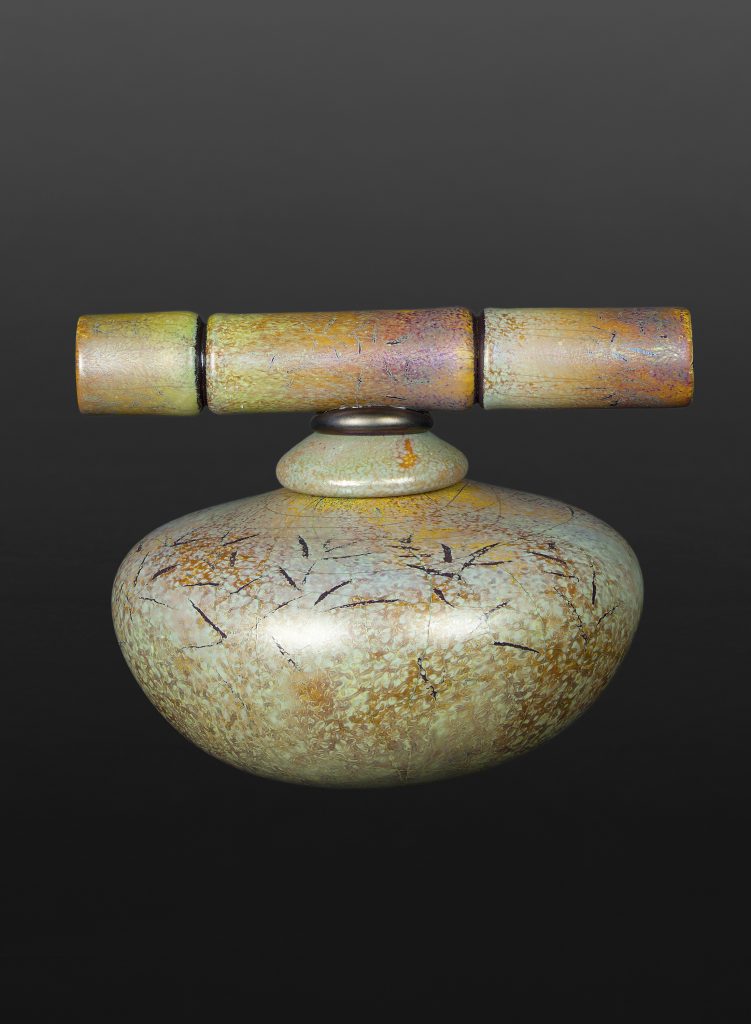 I am always interested in incorporating bamboo into my glass (my studio is surrounded with it and I have always been fascinated by it), as well as, Asian forms. This design was a perfect combination of both of those. Even though I did this series for a short time, it does show how certain aspects of my designs are taken and then morphed into other designs. 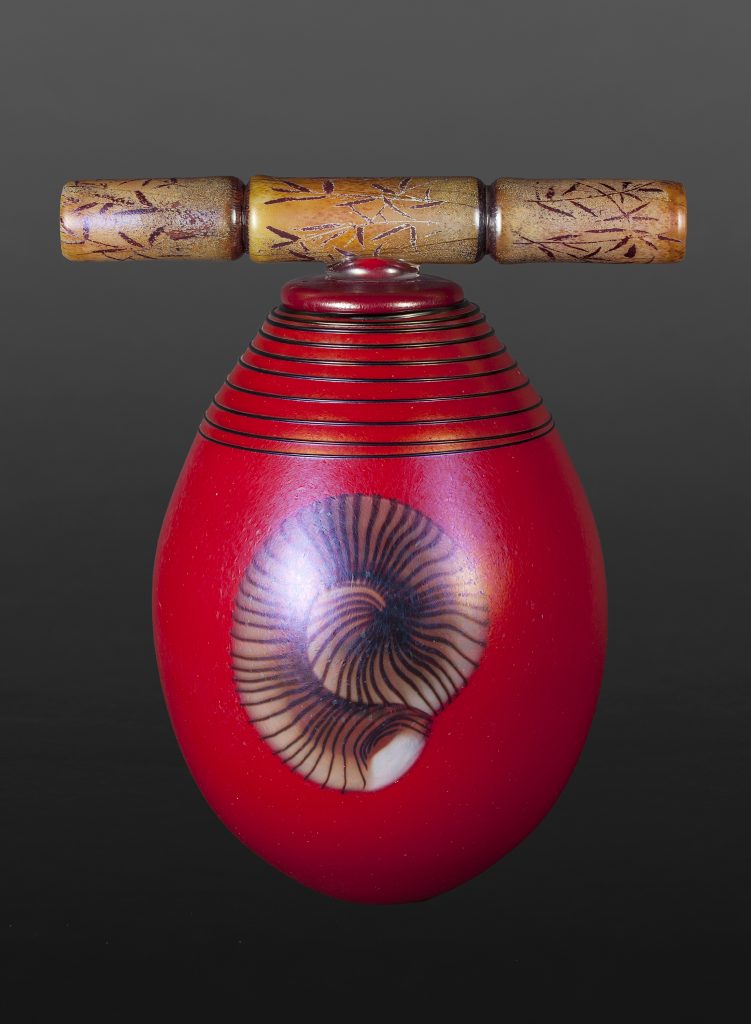 Whereas the nautilus shell had been used in stand alone vases before this design, then I added the feature of the bamboo lid, then after this design I took the bamboo lid part and incorporated it into a different design that flowed with the lid that was more indicative to the bamboo itself with a base that had bamboo leaves imprint on it with a fumed color. This is just a nice example how design elements from different pieces end up in other designs and are then interpreted a different way.

What are two aspects of glass that continue to delight you?

The Challenge. I like the challenge of figuring out a new series or design. Experimenting. It is a slow process, you have to wait to see the results for a day or two, and then make the next change, then continuing through this cycle ever watching the piece evolve. In the early years I had Friday as an experiment day to play with new ideas. With this freedom I could see what new and interesting concept would come up.

The Success. Obviously seeing the end piece, the final reward of the process above. Also success in that I have been able to do a career I love and live the life I have, I count myself in that way, as being very successful. 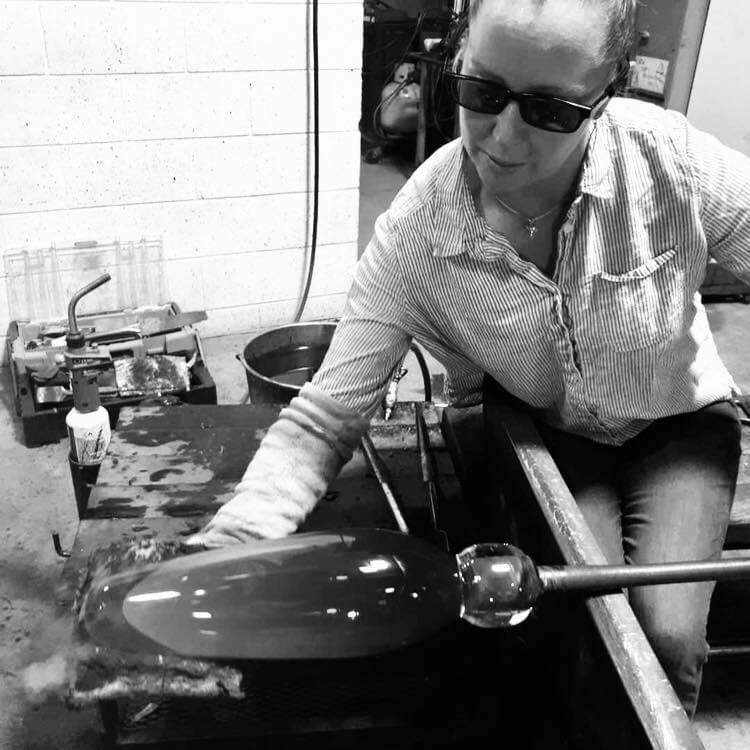 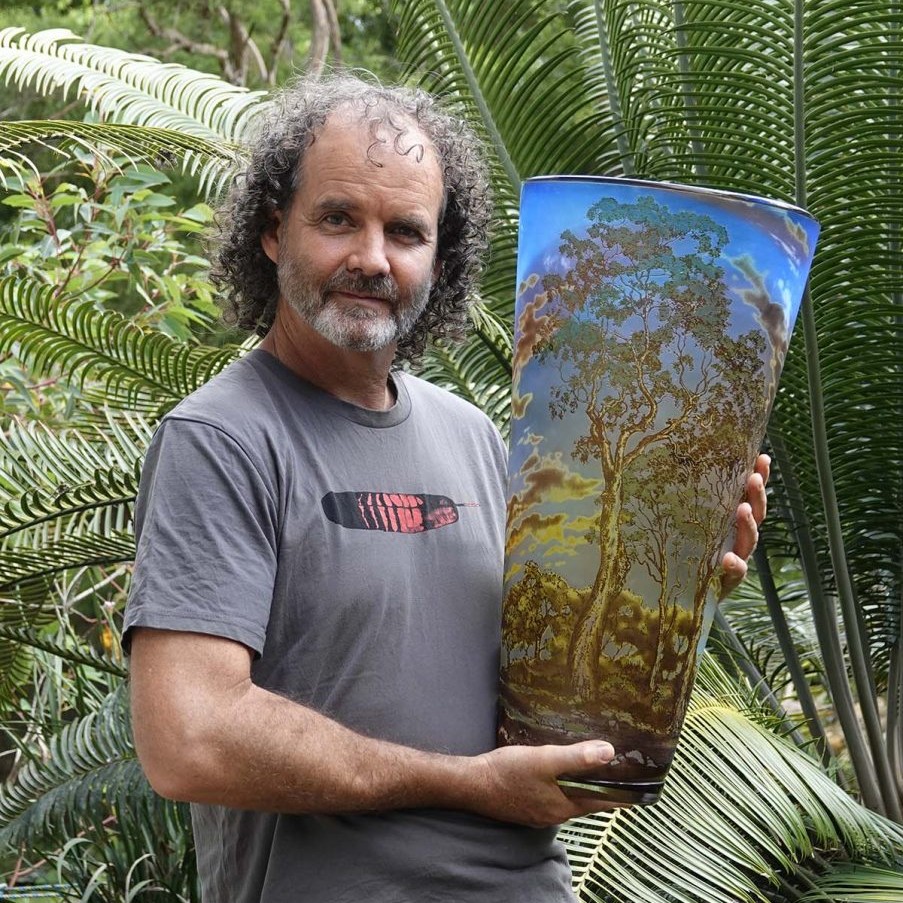 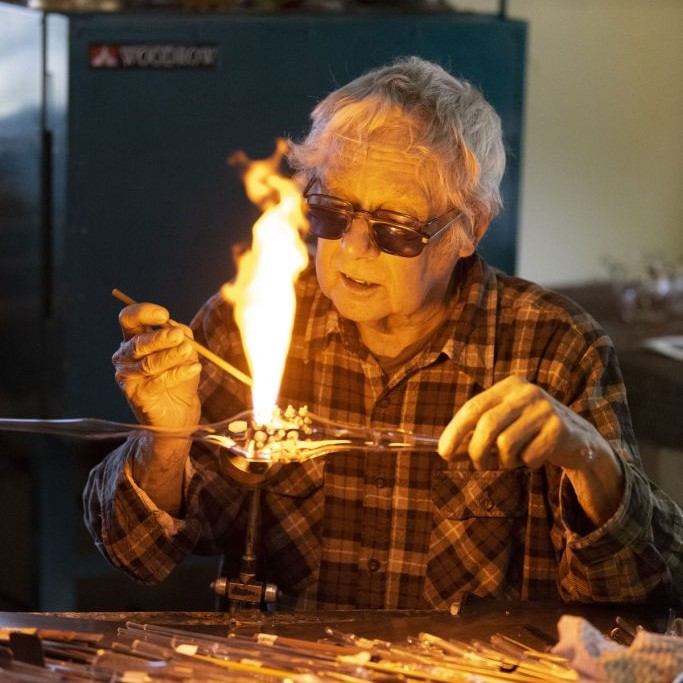 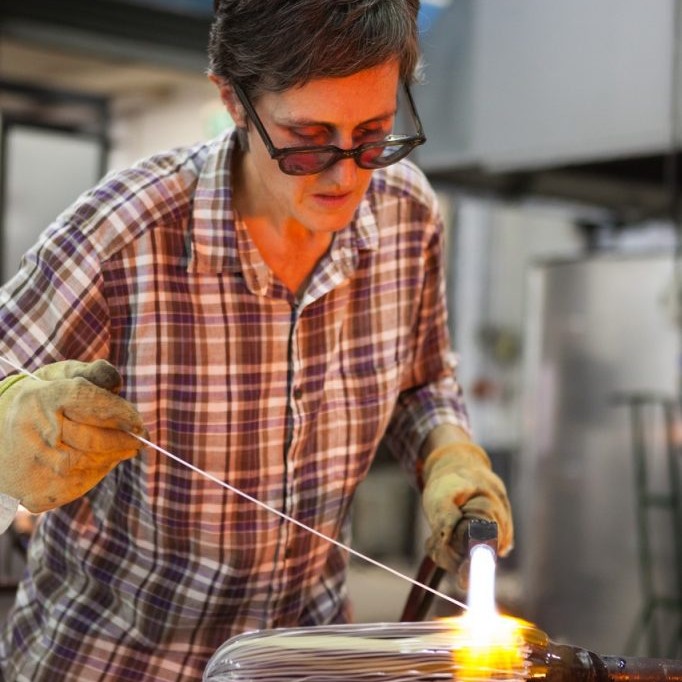