Larry ‘Renzo’ Lewis uses these five words; Symbols, Stones, Bindings, Nudity, and Masks to define the methodology of his work. Returning to cultural history to explain where and how these terms have influenced his art.Zoneone Arts is delighted to bring Renzo to you… 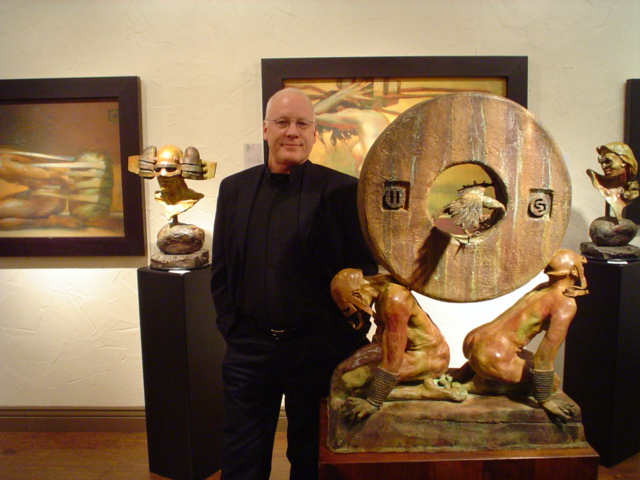 Expand on your use of Symbols/Pictographs/Icons in your work?

I use symbols/pictographs as a secondary means to convey message. Symbols have been around since the beginning. Now after hundreds of years after the introduction of the alphabet, we still depend on symbols for rapid recognition in everyday life – restroom icons, warning signs, on and off function, identification. A form of communication that spans time, culture and language. It seems to fit with the message of my work.

Is there a symbol you use in your work you find more important than others?

Yes, a circle divided into four equal parts or a square separated in the same manner. This was a marking I was using in my work even before I was made aware of its meaning. During the time I was residing in Yelapa, Mexico I was informed by a western person that studied shamanism and by a Huichol shaman. The symbol was used by a group of people in the Amazon in similar fashion as the Ying Yang symbol is used in Asian culture. Instead of being separated in two parts for good/bad or right/wrong, it was separated into four parts referencing good/bad or right/wrong adding time and dimension. I was amazed at this concept. To think a primitive group of folks would consider “dimension and time” in their belief structure.

Closer to our cultural times you have used modern mathematical and physical symbols. Expand on this in relations to your work?

I believe the language of mathematics and physics to be universal. It seems appropriate to include them in my offerings.

Closer to our cultural times you have used modern mathematical and physical symbols. Expand on this in relations to your work?

I believe the language of mathematics and physics to be universal. It seems appropriate to include them in my offerings.

Discuss the way you use stones in your art both sculpture and painting?

I chose stones/rocks because I perceived them to be a most basic element – unpretentious, solid, hard, heavy, of the earth, foundational. I use them as metaphors for thought, memory and emotion. In doing so, I can offer a physical presence to that which is intangible.

Clothing gives a historical point, therefore why is Nudity so critical to your work?

Clothing / adornment makes a statement of not only historical but social, cultural and even religious status. I wish to make statement void of these elements, poignant only to humankind as one.

Explain the importance of masks in your work?

In my life experience, I’ve found that everyone I have come into contact with at some point in time has put forth a facade. Whether camouflage or deception, I find this to be a practiced human trait. Just one of the many things that separates us from being mistaken for lawn chairs.

Your late wife studied archaeology and anthropology how has this effected your work?

I perceive the effect slightly. Accompanying her on a few digs. It simply added support to my thoughts, seeing artifacts unearthed which held meaning of a prior time while offering importance of a time in the future.

‘Adrift with my Memories’

There are many similarities in very different cultures. You have lived with indigenous people; discuss how this has influenced your work?

I agree with your previous statement and believe that when one experiences a different culture it enhances their ability to better perceive their own culture. I would hope the influence is apparent when viewing my work.

How do you decide on making a work into a painting or sculpture?

In my youth I was privy to a quote from Ansel Adams – “there is nothing worse than a brilliant image of a fuzzy concept.” I approach all my work in the same manner. Conceive the concept, develop and complete.

Do you use the same subject in both mediums?

If you are referring to subject matter “Yes.” Subject in regard to models “No,” with painting I use models. Regarding sculpting, I rely on sketches and or composites.

Your own strict religious upbringing, how has it influenced your life and work?

Wow, big question! To this day, I am still attempting to sort that issue out. I have come to view organized religion with ill repute. I live and work in accordance with the content of my character and the faith that there exists something greater than I, and greater than my understanding, that fuels the cosmos.