Join Zoneone Arts and revisit one of our past conversations.As many galleries and museums are closed or partially closed due to the pandemic. Rather than missing an interview Zoneone Arts has needed to delve into our archives. We hope you are all well and safe.Zoneone Arts brings Pippin Drysdale to you… 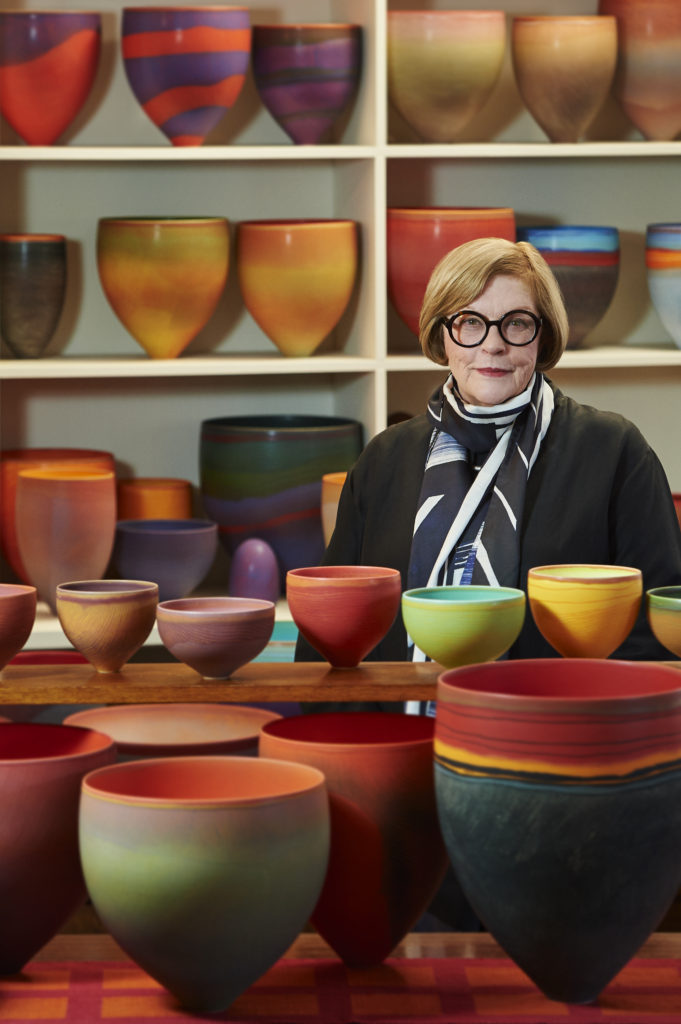 Pippin Drysdale is an award-winning ceramic artist based in Perth who is renowned internationally for her large, intricate works inspired by the patterns and colours of landscapes around the world. 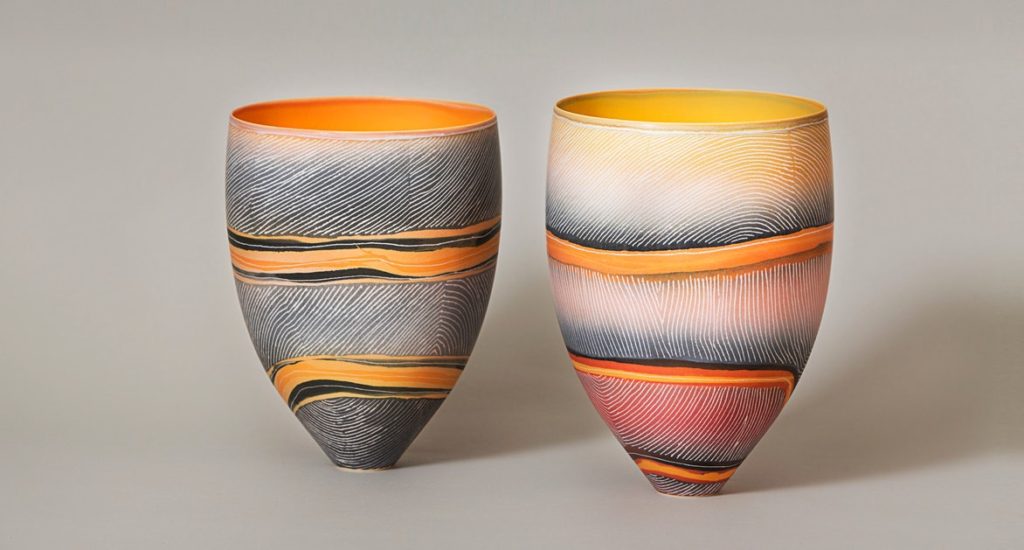 Pippin eventually progressed to exploring ceramics in which to present and display her plants. With her own kiln in the back yard and her irrepressible need to learn and explore a new material, she undertook formal ceramic studies first at Perth Technical School and then at Curtin University of Technology, where she completed a Bachelor of Fine Arts in 1986 under the tough but impressive direction of teacher David Hunt. 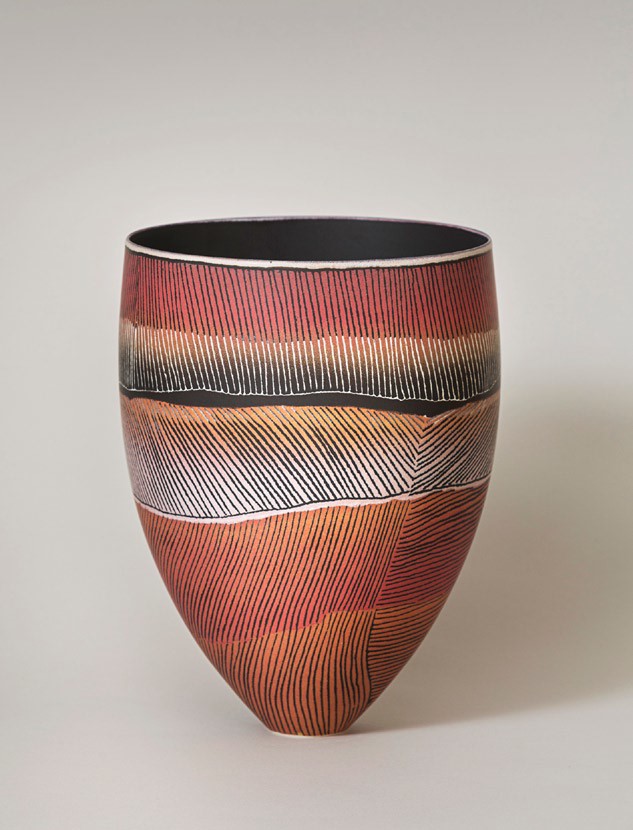 Their simple mission statement: “Anderson Ranch Arts Center enriches lives with art, inspiration and community” enticed Drysdale to spend time in this dynamic environment, sharing, teaching and developing her craft,  learning from others, and cross-pollinating with artists working in other media. The Anderson Ranch FaceBook page says that this is a place “for artists to immerse themselves in the studio practice of their choice. [They can] work alongside established faculty and receive in-studio support while still getting plenty of independent time, allowing the creative process to flourish.” What not to like? 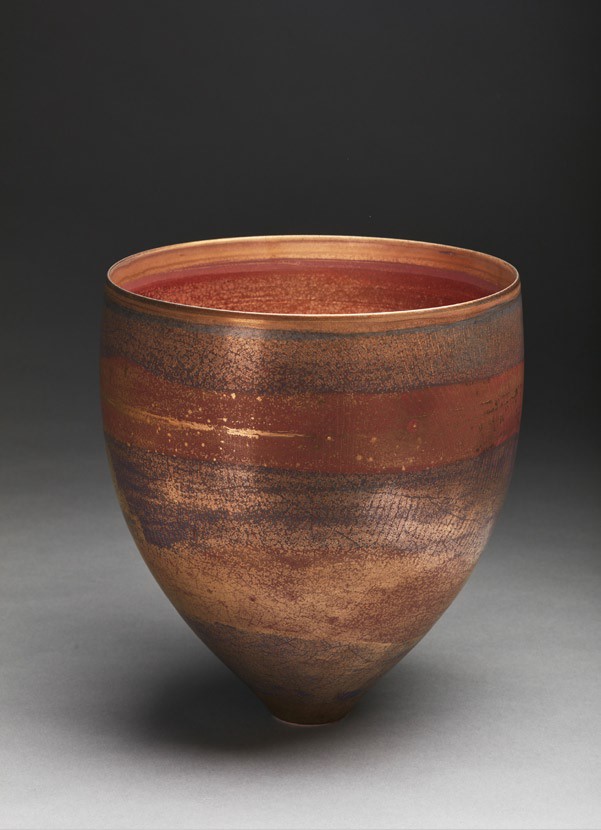 After returning to Australia, Pippin threw herself back into her work and her pieces,

were soon regularly exhibited and collected by major galleries around the world. To date, Pippin’s work has been seen in over 45 solo and group exhibitions in Australia, Japan, India, Europe, and the United States. She discovered a need to work thematically and many of her series are influenced by a journey. 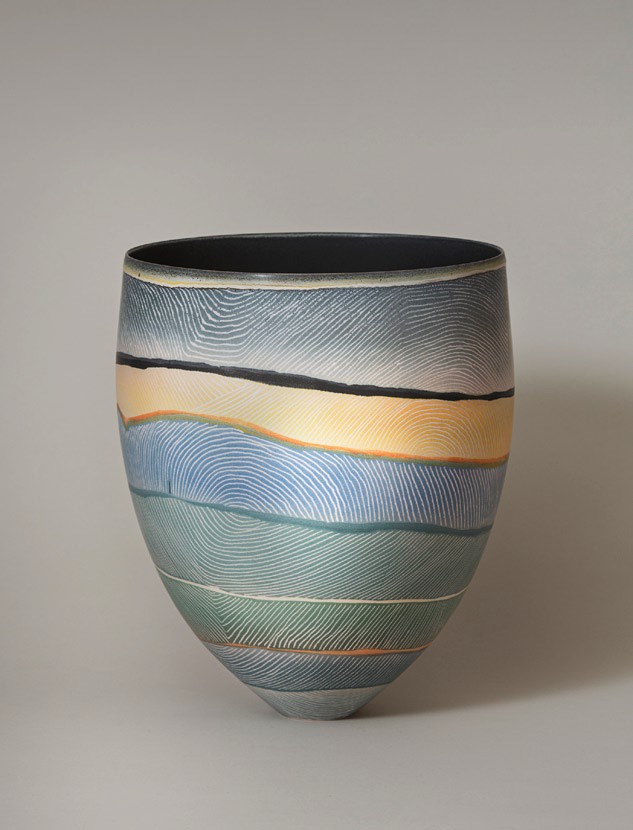 Drysdale draws inspiration from the colours and textures of landscape, and each of her pieces is infused with her emotional interpretations of place and space. Pippin focuses on the vast, diverse Australian landscape and has created series based around the patterns and colours of the Pilbara region, the eastern Goldfields, the Kimberley, and the Tanami Desert. Stark, severe, somber, sometimes flooded with intense colours, the landscape she journeyed through  gave her endless inspiration. Some of her work has also grown from the exotic sights she saw in India, Russia and Italy, and in the Hunsa Valley in Pakistan. 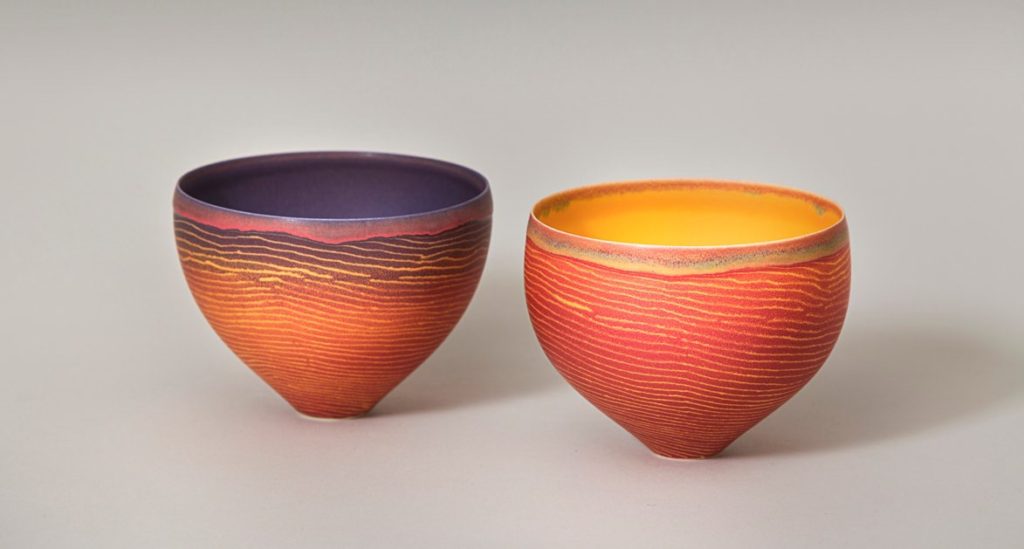 Drysdale,explains that landscape ‘is all about colour, whether subtle and soft or vibrant with contrast’.

Drysdale is totally committed to her work and constantly pushes herself to a higher standard. Her perfectionism is reflected in her ambitious works. In 2007, a major survey exhibition of Pippin’s works was held at John Curtin Gallery in Perth, a testament to an impressive two decades of endeavour. In 2008, Pippin was named a Master of Australian Craft by the Australia Council for the Arts. The following year, she undertook a residency at the New York City Department of Cultural Affairs. In 2010, her Tanami Mapping I exhibition was opened in Washington DC by Kim Beazley, Australian ambassador to the USA. In 2011, Pippin received a Lifetime Achievement Award from Artsource, the peak membership body for visual artists in Western Australia. 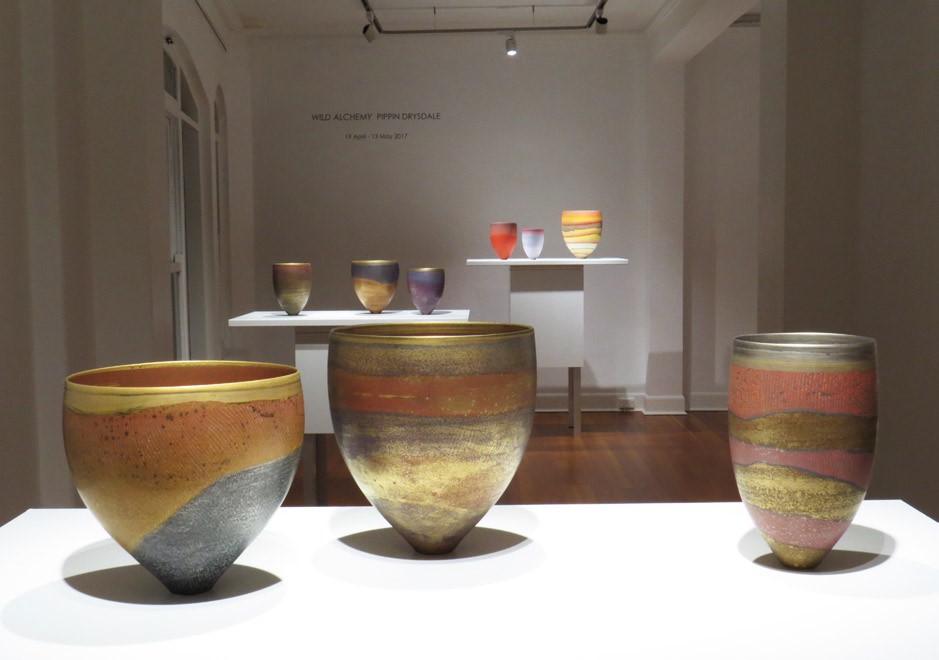 The range of vessels we see in images from world-wide collections of her work present a sumptuous spectrum of colours, warm and earthy, glowing amber-like or opalescent, dark ruby-garnet shades, while some capture and present in solid form the airey colours of mist. The two predominant shapes are the female – goblet-shapes, and the male – phallic-shapes.  Many of the open goblet shapes have a contrasting colour inside which enlivens the pieces and playfully ties them to other pieces in the collection. Pippin explains, “the inside of the vessel is coloured  by half-filling it with coloured glaze and swirling it round until a perfectly graduated colouring is produced. An evenly coloured inner void … is essential to the overall presence of the work and this … cannot be achieved with spraying alone, which leaves a dry powdery effect.”

Granites in Moonlight, Porcelain incised with coloured glazes, (Installation of 7),

With reference to her collection, DEVIL’S MARBLES 1 2016 – Shadow play, Pippin describes herself as   “an Australian landscape artist”. Incised lines are my signature, but I use the ceramic vessel/ sculpture to describe the shadows and colours of the Australian landscape at different times of day.” The Devil’s Marbles are a collection of monumental granite boulders scattered across a valley south of Tennant Creek. Millions of years old, some of them are nearly 6 metres tall and are still weathering and changing in the desert environment. 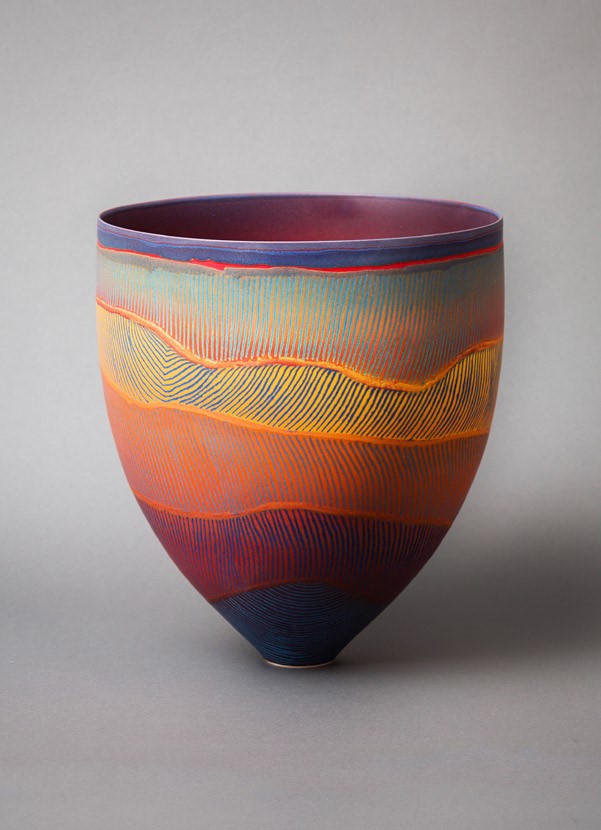 The female shapes balance on remarkably slender bases, not quite at the point of teetering, but seeming to be frozen mid-spin. Pippin’s “signature”, the delicate incised lines circling some of the vessels add to the sense of movement of these pieces like the shadowy strata on others. Grouped together they become a table-top landscape reminiscent of some of the extraordinary landscapes in Australia. Of these group installations, the artist explains that “it is their individual and collective shape, colour multitude and brilliance [that] contour the vast expanse of the Australian landscape. In the near future, I will push the integration of groups even further to create more diverse  installations.” The Devil’s Marbles perhaps are the quintessential demonstration of this desire. As she says, “My future trajectory will focus on the Devil’s Marbles. I will continue to push the exploration of abstract ideas [about] spatial relations, line, texture and colour. Most recently I have returned to using gold and platinum luster and I am enjoying exploring how it can be used on the marbles to capture the iridescence and radiance of the Australian desert.” 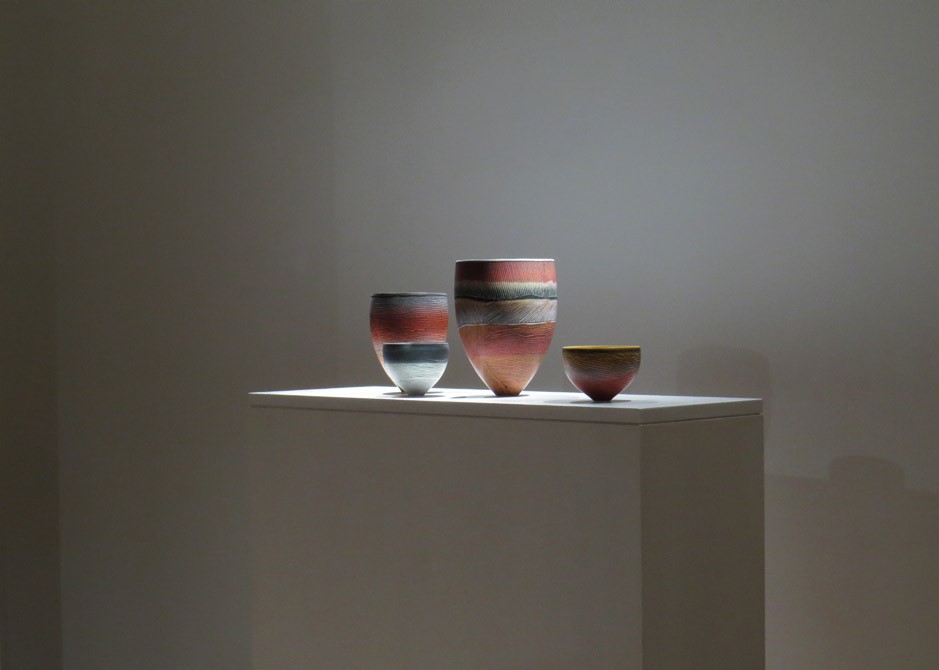 Integral to Pippin Drysdale’s production is her thrower, Warwick Parmenteer. His handling of the clay forms, both on the wheel and on the table, show an intimate feel for the material. Mixing delicacy and strength, Warwick’s hands raise the lump of wet clay to become a large hollow globe which he then leans on to create an altered form, edgy and asymmetrical. Pippin’s metallic glazes then define and enrich the shape with their glowing response to the light. The reflective nature of the glazes emphasizes and lifts the form, the soft edges imposed on the original form becoming softly insistent and dividing the faces of the form from each other.

Now in her mid-seventies, Pippin is grateful to still “wake up every day with a challenge” and believes that she has found her identity through her work with clay. 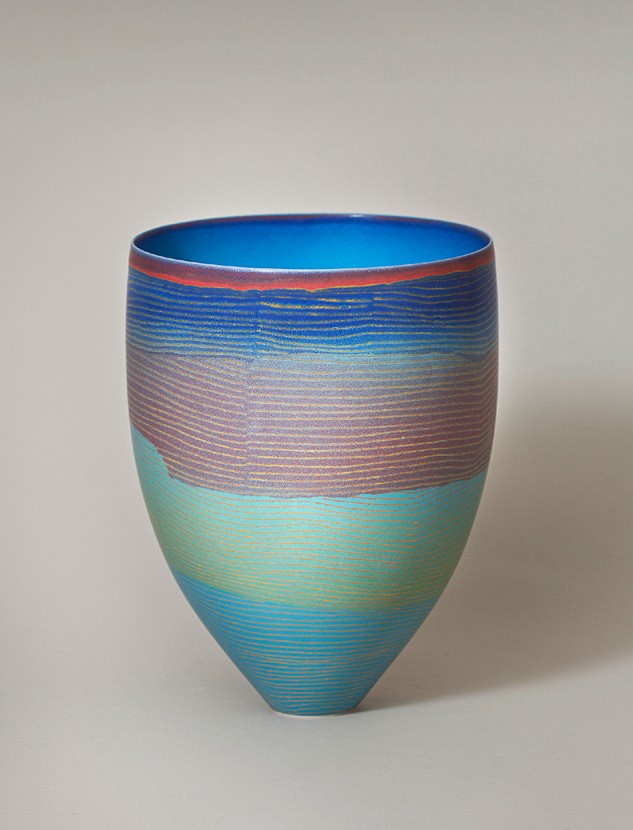 Images supplied by artists in conjunction with Sabbia Gallery