When did you first become involved in photography?

I had a dream of becoming a photographer when I started working as a telecommunication engineer. When I had a travel to Japan, I spent big bucks to buy a camera with a promise that “I can do”. However, my job distracted me from this camera for three years. One day, I found it on my bookshelf, I smiled to myself and released that I am losing myself and my promise. Then I started taking photographs and studied photographic techniques by myself and through my friends and made “I can do” come true. 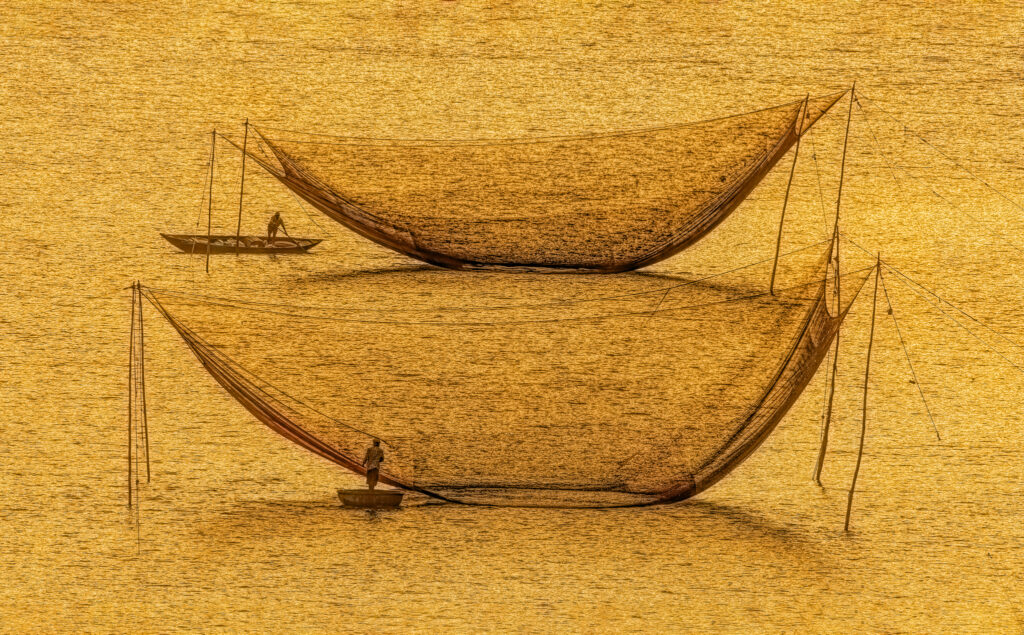 Are all your photographs taken in Vietnam?

Not really. All most all of my photos are taken in Vietnam, but I have taken a lot of photos in other countries such as the UK, New Zealand etc.

What are the lilies used for? 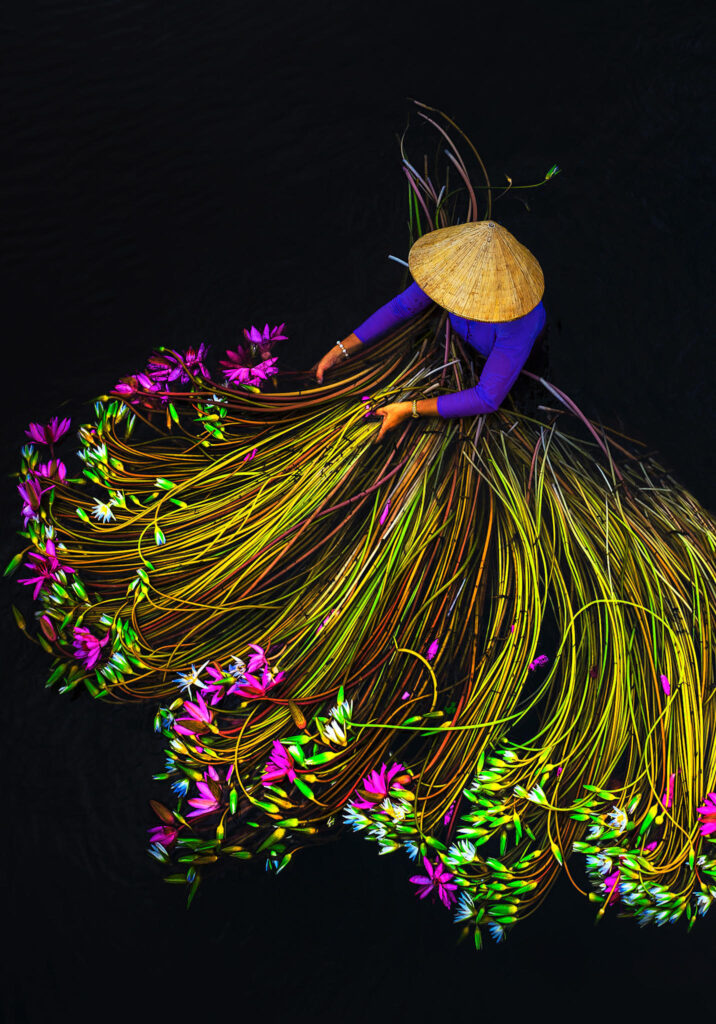 These water Lilies will be sold for restaurants or used as vegetable in the family.

What time of the year are they collected?

From August to October yearly. It is during this period of the flooding season and the time of harvesting waterlilies. 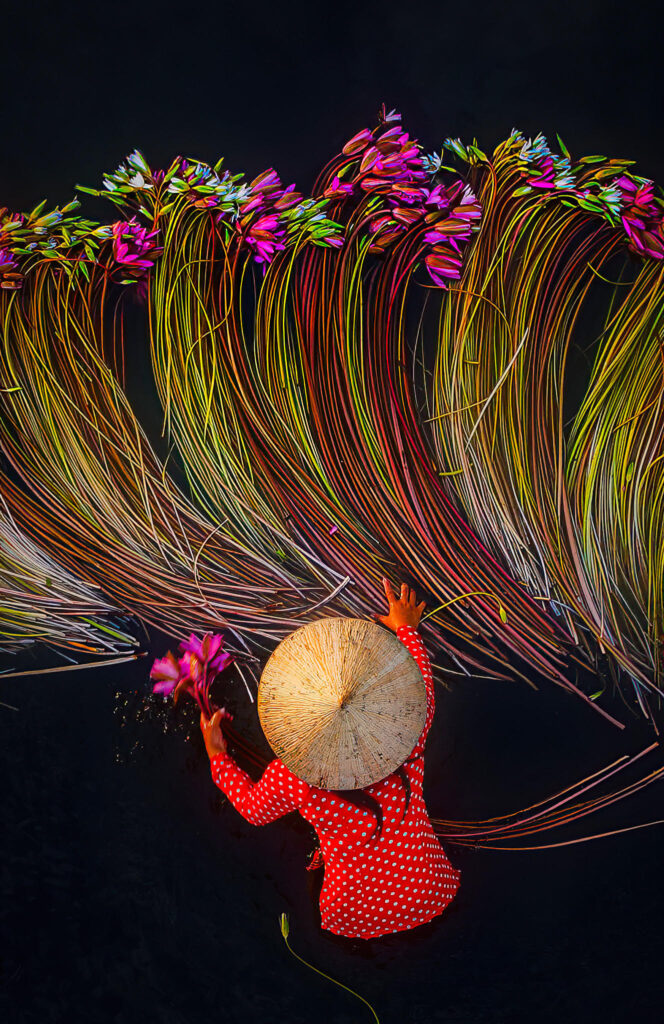 Your use of pattern created in the collecting process.

T-shirts of the women are a perfect match for the colours of flowers. The shape of the pic looks like character “S” which is soft, gentle like the shape of lilies. How you have used a black background.

Actually, the water is not clean, because these flowers can only live under mud and water. These flowers are also named, ghost lilies because it blooms from 3am to 5am. Thus, the women must wake up early and collect these beautiful flowers before sunrise. 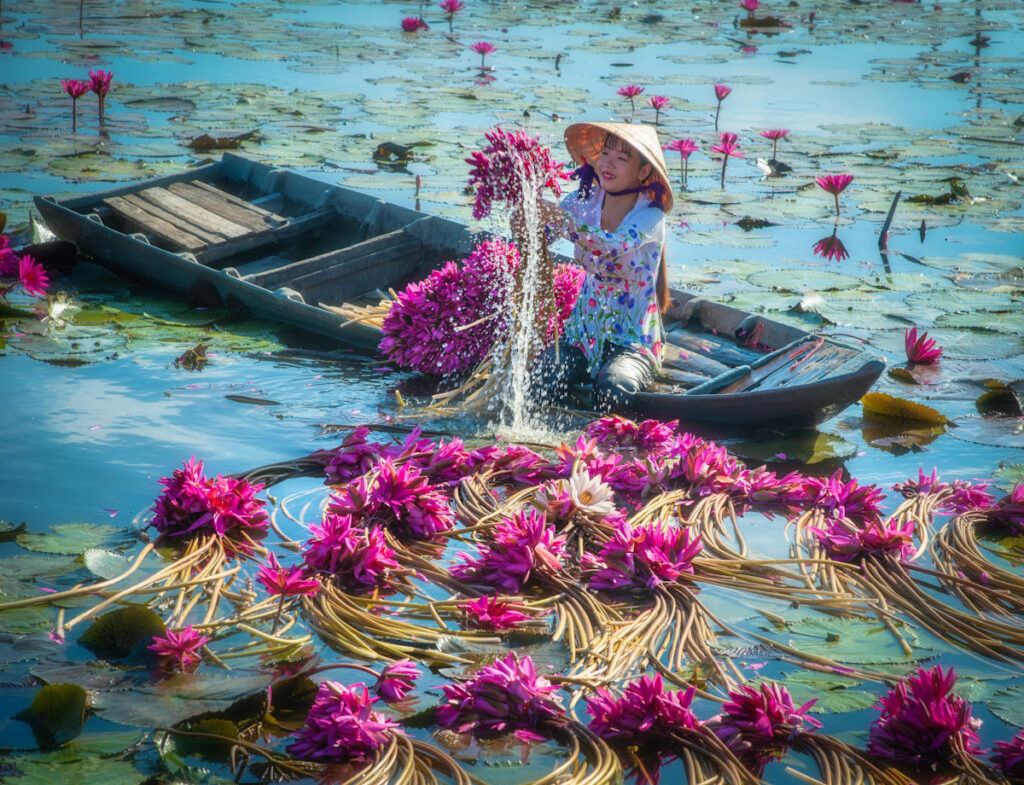 How did you take these aerial photographs?

I check the weather to be sure that the sky and light supported me. I used my Mavic 2 drone to take the photos.

How often are your photographs used to promote Vietnam?

I always use my photos and my emotion for elevating Vietnam’s landscape, traditions, and people. I believe that Vietnam is endless topics not only for Vietnamese photographers but also worldwide professional ones. In the Salt Fields

Dark blue sea matches with light blue colour of the fishing net, which was lightened up by the sun. 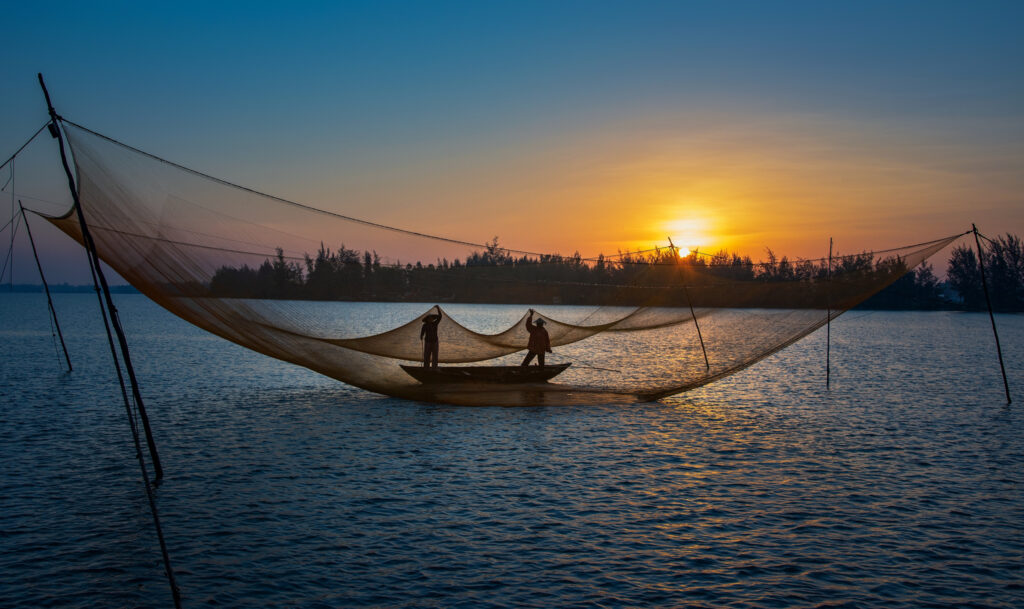 The fishing net is excessively big, which requires the fisherman to put the net under waters and drive the boat and cast it as fast as he can. Especially, it is not easy to create the pattern. 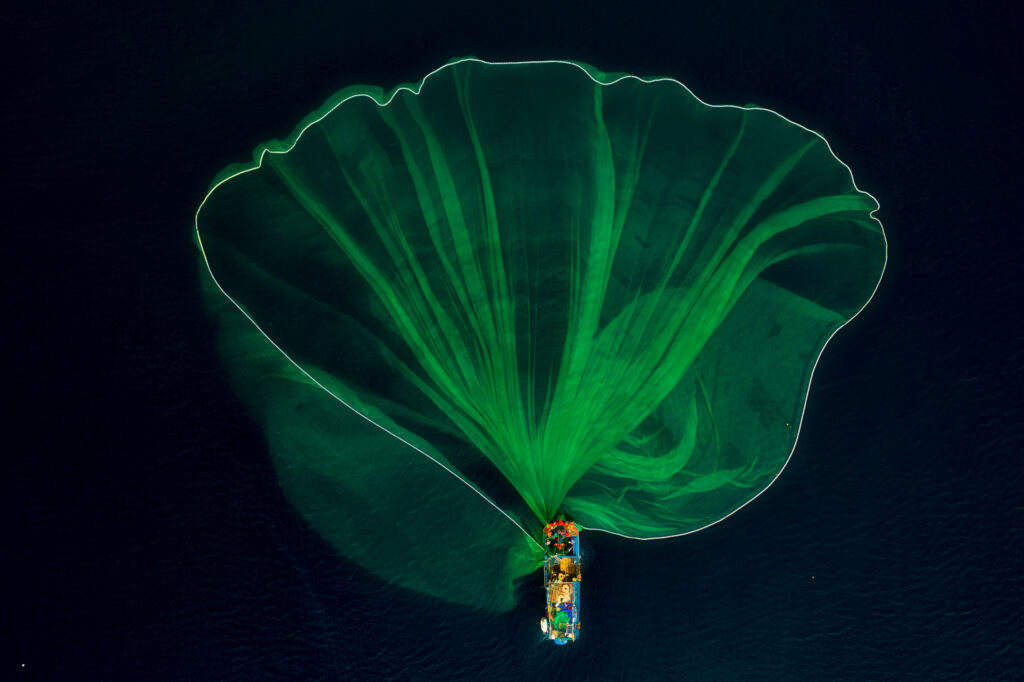 This was created by nature and depended on the skill of the fisherman. I got the moment when he created the shape like a tail of a giant fish on the sea. Taking daily life and transforming it into art.

Casting net for fishing is daily work of the fisherman in Phu Yen province, Vietnam. He must wake up early in the morning and follow the streamline to the position where he casts the net.

(Ha Long Bay): The reflection of the boat created the colour of the pic. Blue, green, and white were dotted by the red of woman. 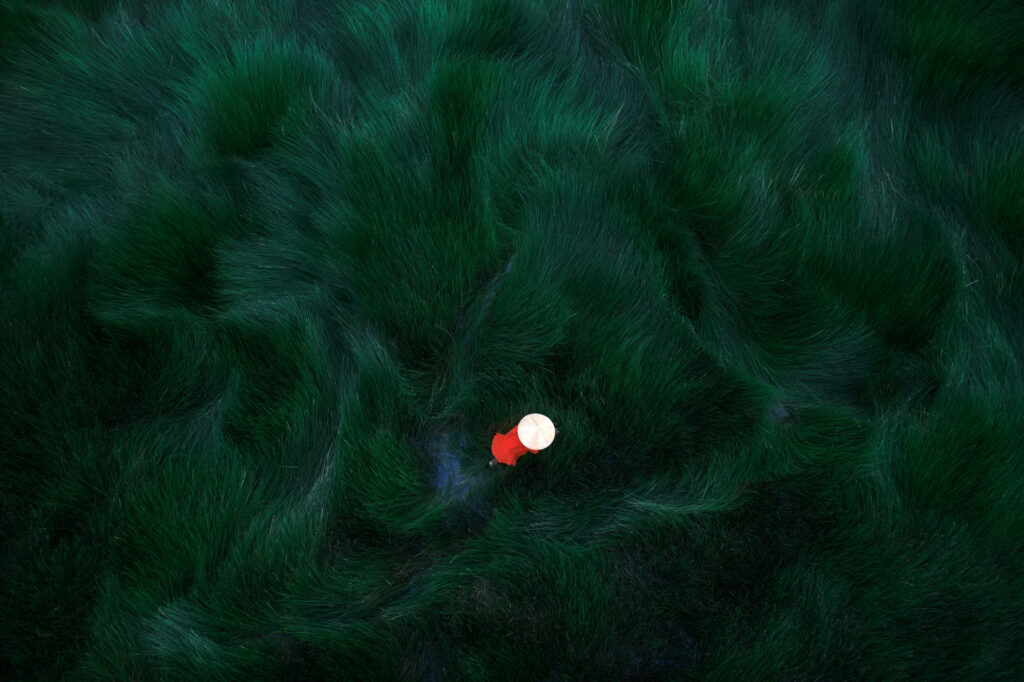 The pink algae is naturally grown in the middle of a lake in Lam Dong Province, Vietnam, just once a year in October. 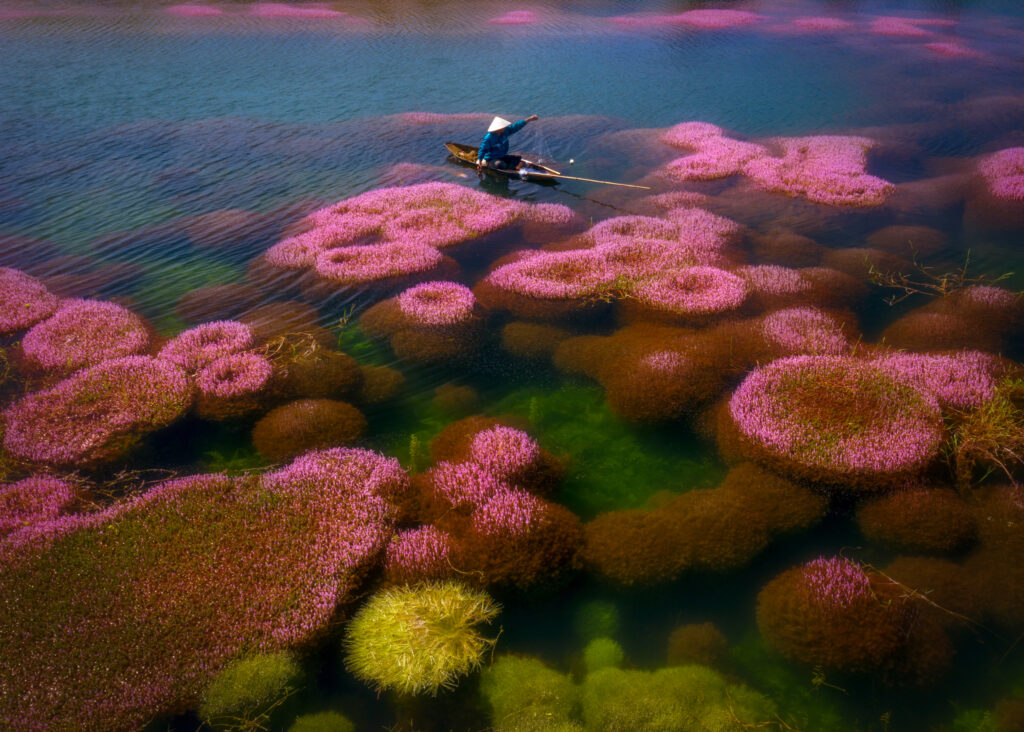 The pink is pale, wide which is vividly mixed with blue of the lake water and the shirt of a fisherman.

The blue of the T-shirt and purple pink of the flower on the black ground created the contrast and impression. 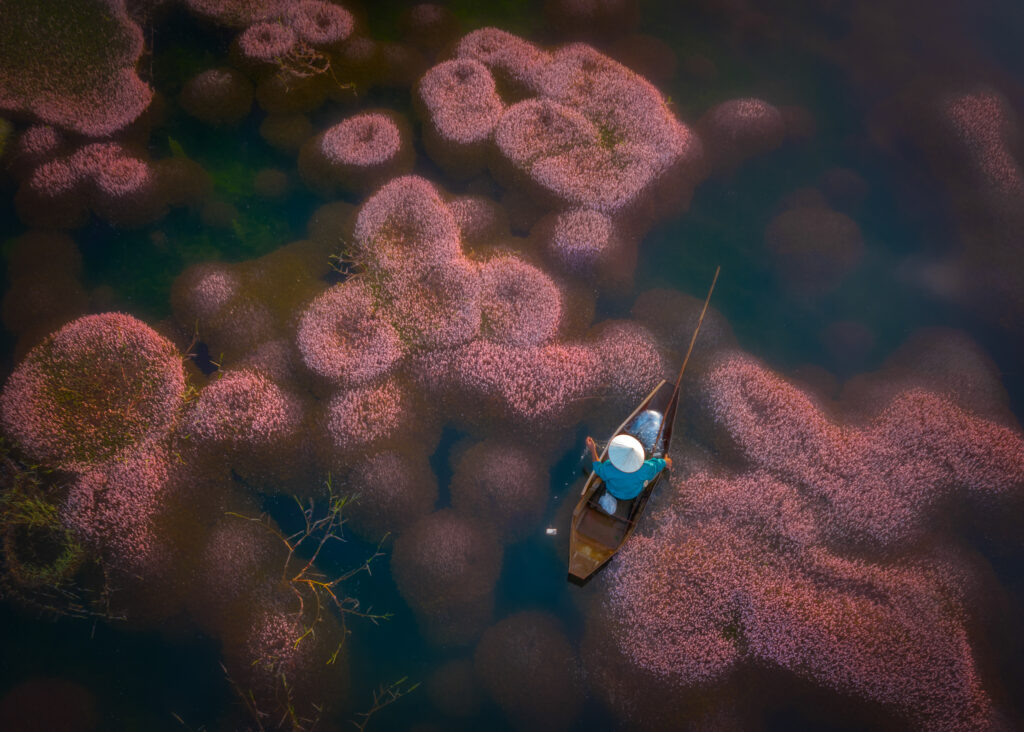 You also work using the human image in silhouette  expand on this technique.

Yes. This image was taken during the playing time, of children living in Phan Thiet Province, Vietnam in the late afternoon. When you photograph daily life you use both males and females comment on this in your work? 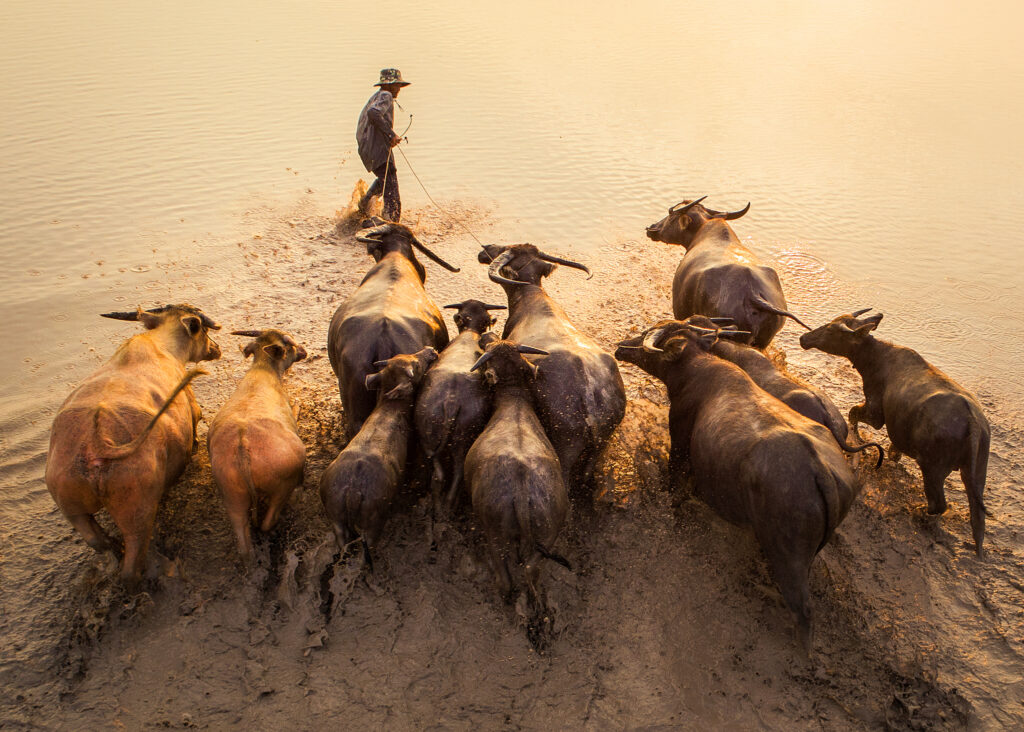 My emotion and sense just find the best moment of life of whoever males, females, or both. 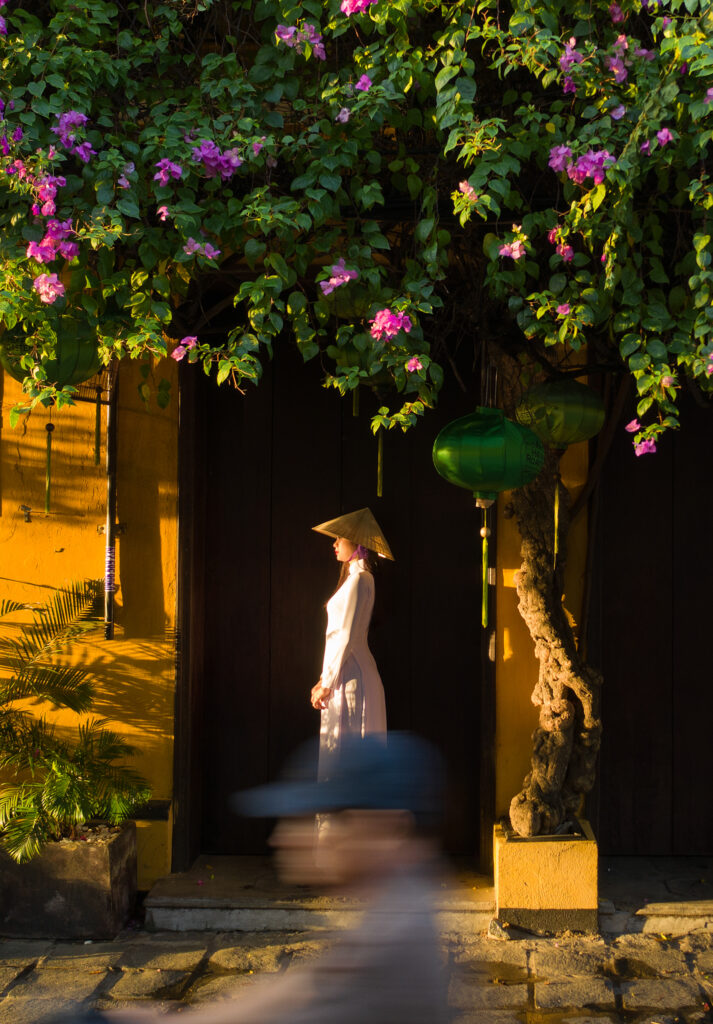 Slowly the sunsets and you capture the moment of the day ending expand.

Then night and the sky is black, but the lights come out.  Comment on you work both urban and rural at night.

As usual, the dark is followed by the fears, and people in Hoi An province want to release the flower garlands on the river with a wish to bring happiness and peace for life. 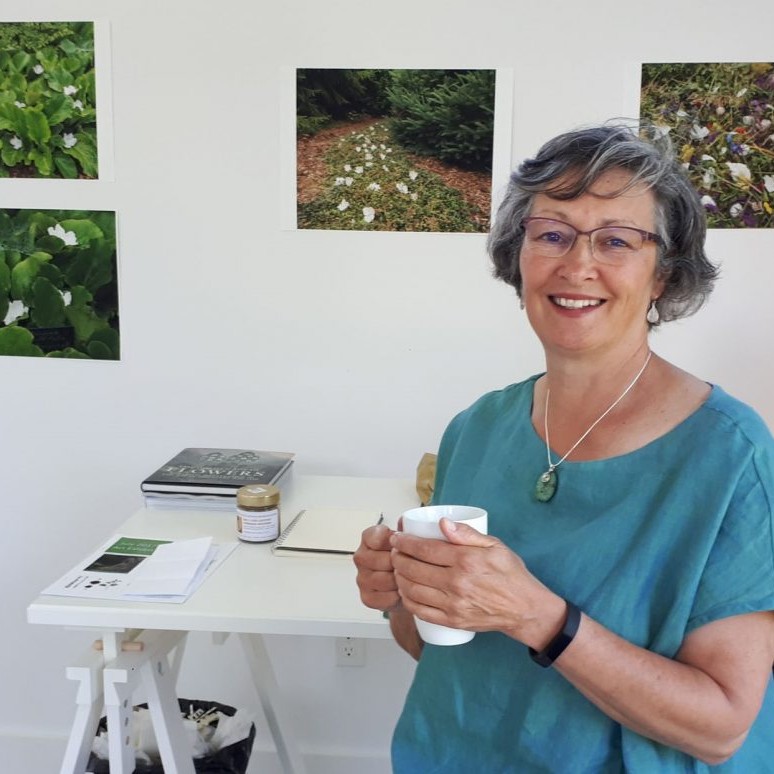