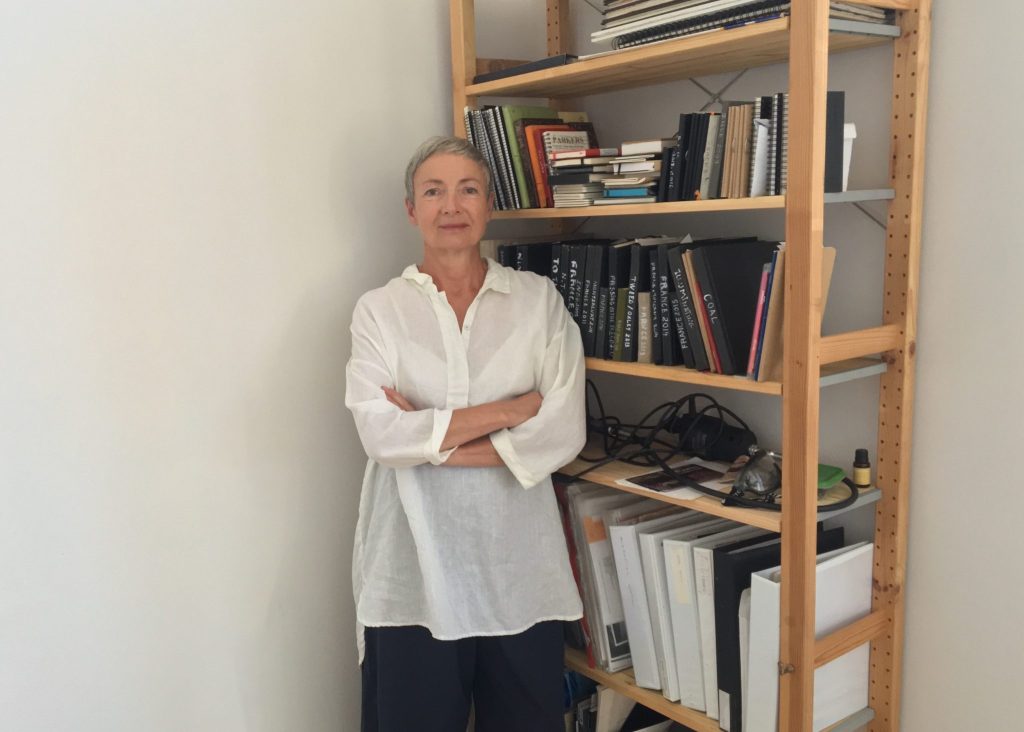 You comment,’ My work is focused on the voyage between people and their environment ….’  Can you explain this in relationship to your art work?

My first major exhibition “Of Global Appearance” was based on the Quarantine Station at Manly, NSW. When I started researching this project, I really wanted to know the stories before and after the migrants arrived in Australia. 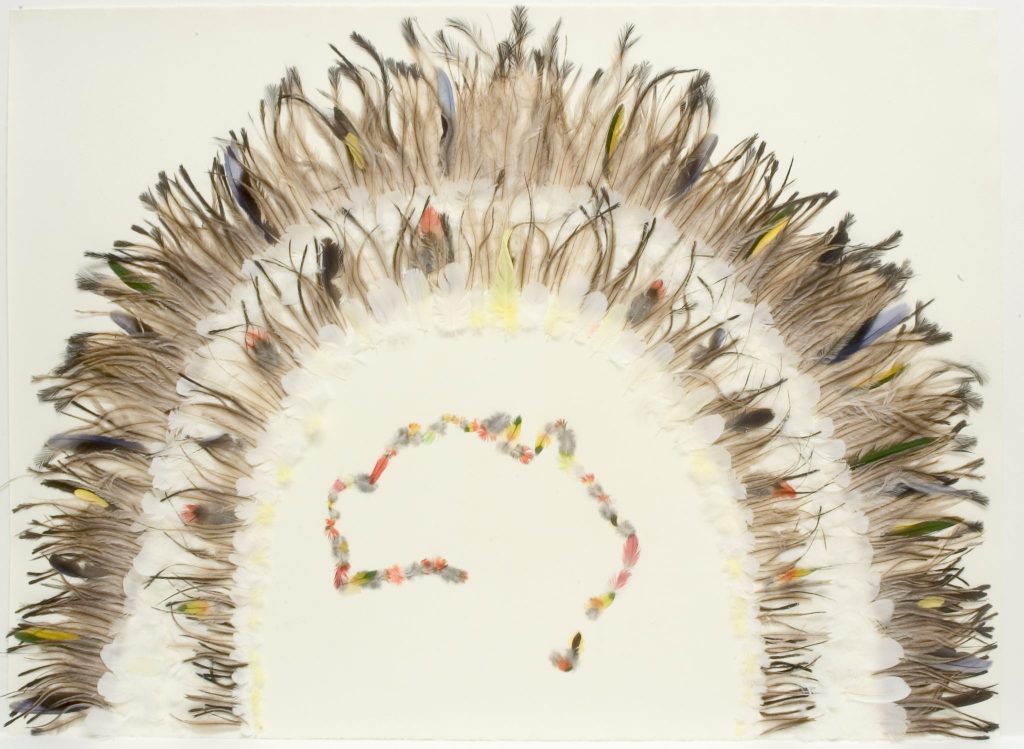 The Gift of Feathers

The more I researched the project the more I realised the place was a micro representation what Australia is today. It accommodated waves of migrants, but also refugees from the Vietnam War, gave a refuge to homeless people from Cyclone Tracey in Darwin but also those deemed to be illegal immigrants waiting to be deported. 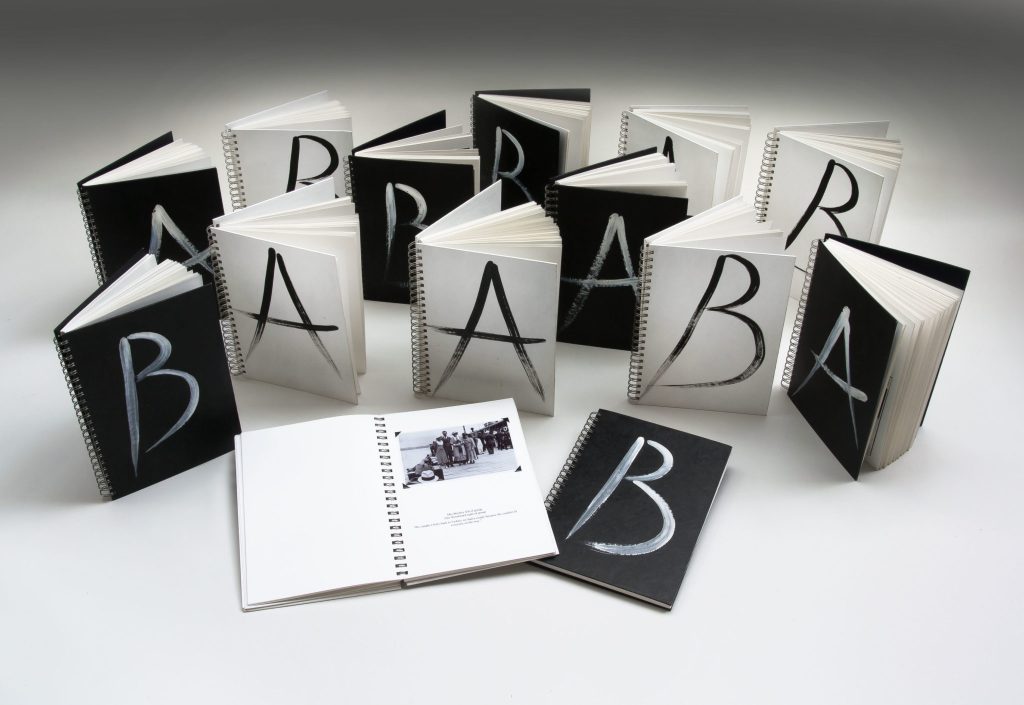 This notion of connection with a place became very important theme in my work. As a French migrant to Australia, it was very important to belong and to create connections. The environment, the landscape became a theme in my work, the journey between two cultures, two different landscapes, to be like a navigator, an explorer into my new world. I looked at past explorers’ journeys, such as Lapérouse. I researched their connections with the land and the meaning of the exchanges they established along their long journey around the world. The list of the objects taken on boards as gifts, such as botanical specimens, feathers, pigment, buttons etc was fascinating, linking to rituals and its meaning in society.

This research was then translated into my work, such as the creation of imaginary maps and botanical specimens or with natural pigments extracted from the plants.

You have had residencies at Murray’s Cottage at Hill End please discuss how these residencies have influence your work beyond the residency.

and one with the National Art School, it was such a great experience I could go back any time. 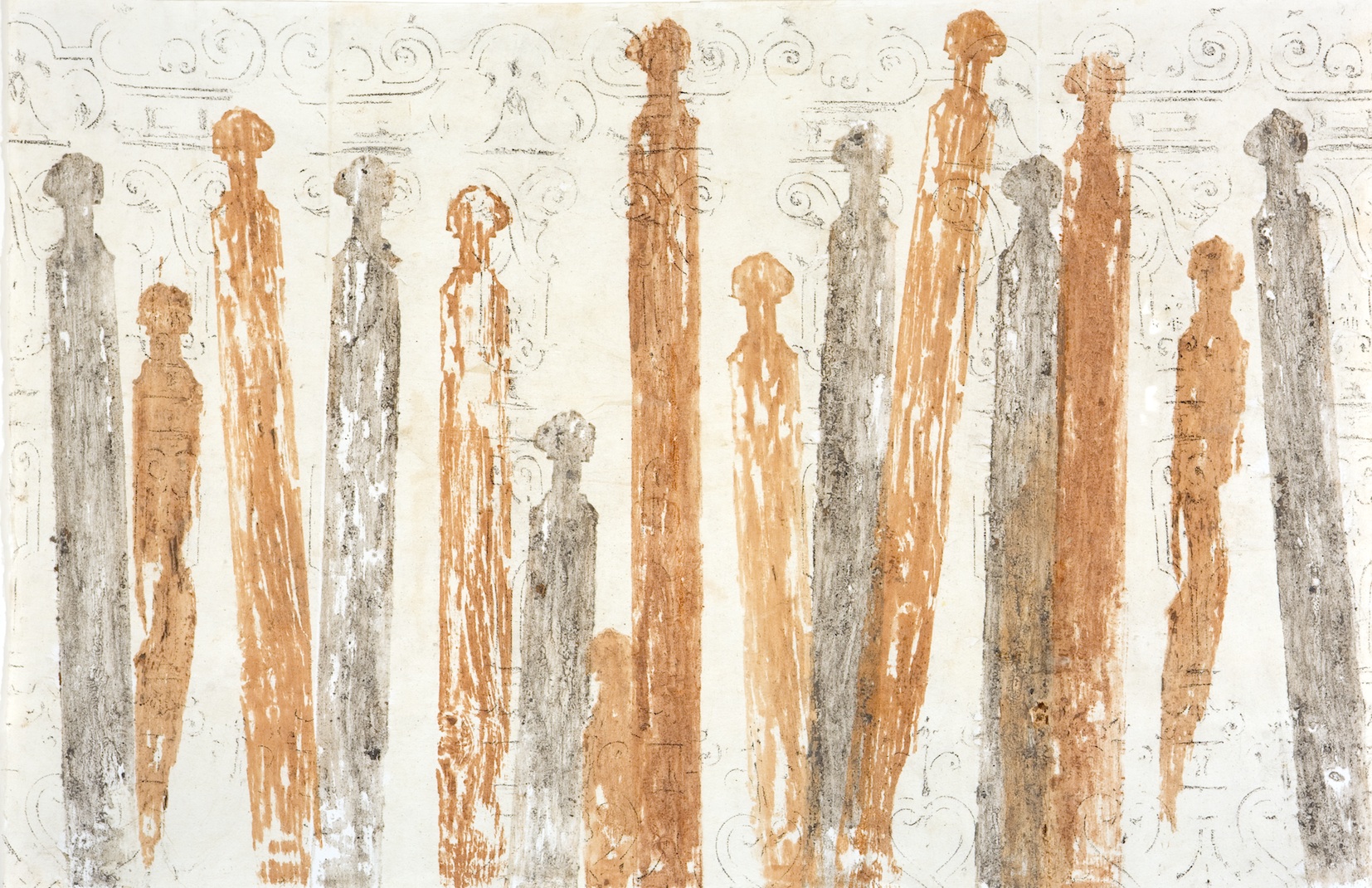 The place encapsulates the different themes in my work. It relates to migrants coming for the gold rush, the migration of botanical specimens by Louis Beyers who missed his European landscape and planted European trees forming a large avenue leading into the village of Hill End. I collected all the different colours of clay I could find around the village and I used them as a relief print medium. They are the same colours found in the paintings Russel Drysdale, Donald Friends, Margaret Olley, Jeffrey Smart, Jean Bellette who all stayed at Hill End. All except one, the grey colour clay, found underground. The one I printed with in “Remembrance” was found at a depth of 400m. 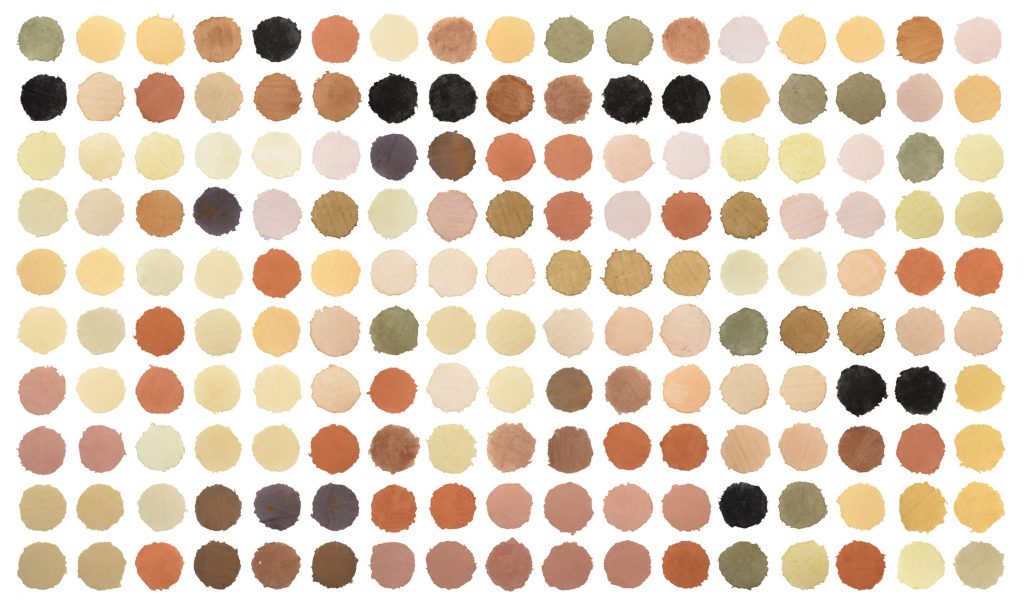 Colour of Hill End, plant and earth pigments on 170 hand made paper,

I collected plants and extracted their pigments to create of another botanical landscape. 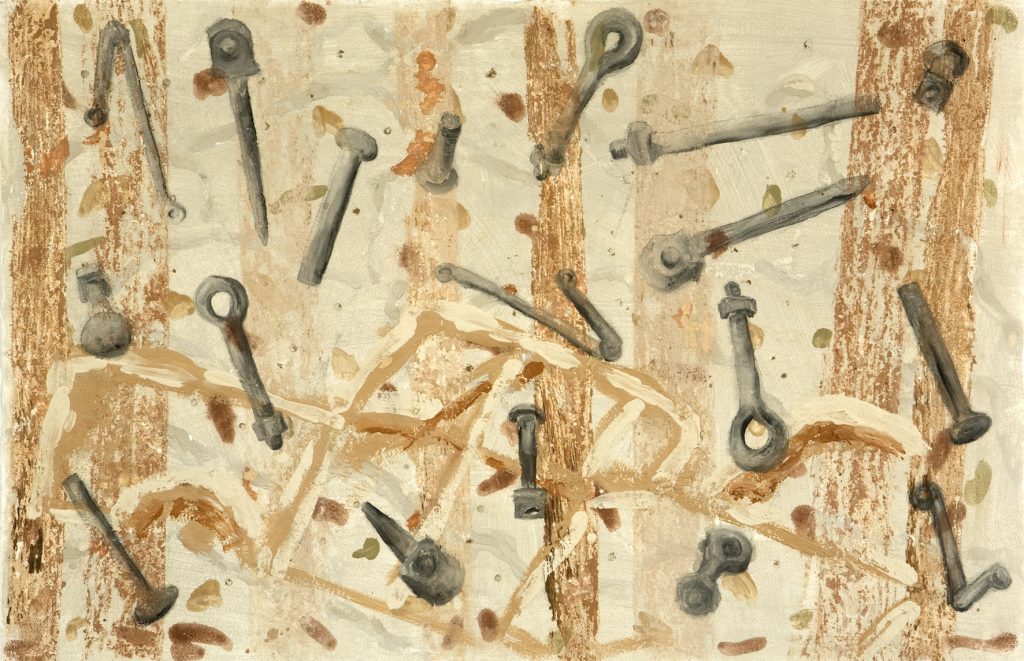 This work influenced two projects I am working on at the moment on the Blue Mountains looking at the impact of coal mining and for the Museum d’Histoire Naturelle in Le Havre in France working with plant pigments.

Discuss other overseas residencies you have been involved in and for each give a brief outline of how the environment has influenced your work.

I was awarded two residencies at the Cité Internationale des Arts (CIA) in Paris. The studio at the CIA is fully furnished and it is also a working space, a base to come back to. The building is in a fantastic location, it is right in the middle of Paris and provided me with a unique opportunities to visit as many museums and galleries as I could. There is nothing in Australia such as Le Louvre, Quai Branly or Musée d’Orsay for example. 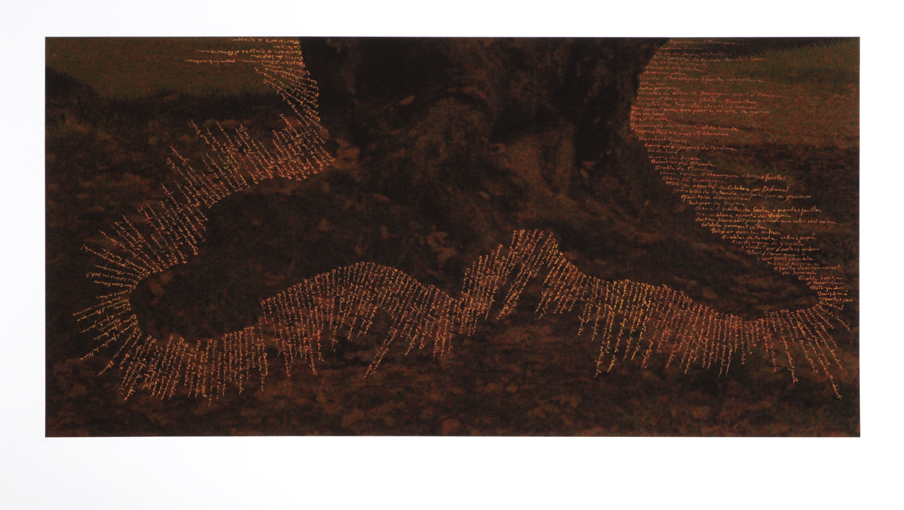 Explain your work in the Manly Artist Book Award, and the process you took to create your book?

The work I entered for the Manly Book Award was originally created for an exhibition with the group of artists called the Sydney Printmakers. The work had to answer the theme of “Fun and Game”.

I was born in France and, as a French speaker; I am fascinated by the double meaning words can have from French to English or English to French. In the game “Jeu de Dame” in French or “draughts game” in English, when the player reaches the far edge of the board the piece is crowned and becomes a “Dame” in French and a “King” in English whence the title of the work “Lost in Translation”. I made a chess board with 64 hand made paper squares, 32 black and 32 white squares, with 24 smaller pieces. All the pieces were stored in a Solander box. I attached 2 pieces of hand made paper to the top of the box, black and white, with the female (for “Dame”) and male symbols (for “King”) relief printed on two small pieces of hand made paper. The Manly library bought the work for their artist books collection. 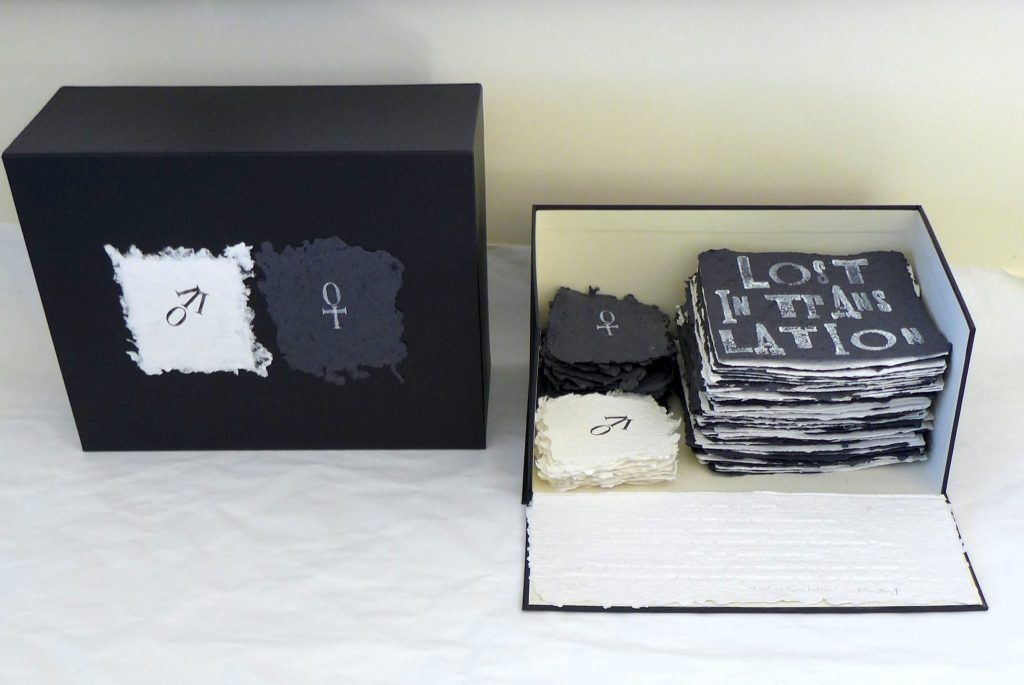 Briefly expand on the type of printmaking you are currently doing?

At the moment I am mixing my printmaking techniques. My last work is an installation mixing relief and digital print with drawings and hand casted paper. 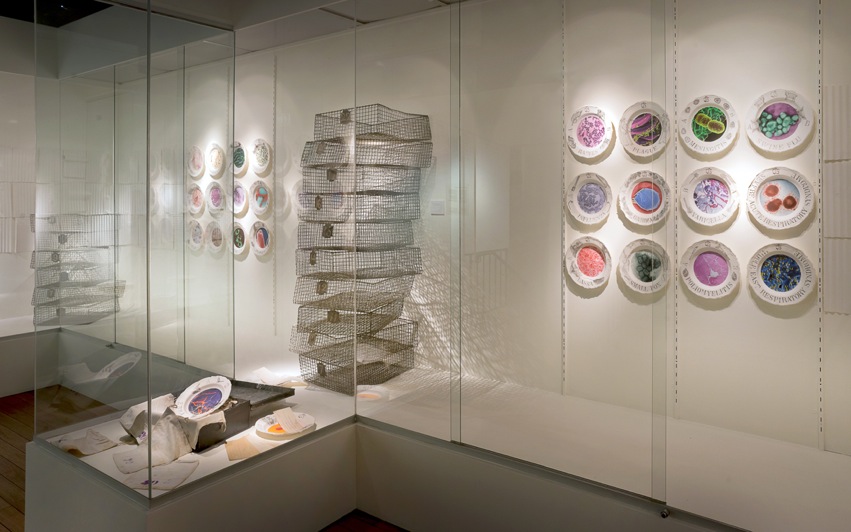 In collaboration with Penelope Lee we developed a project titled “Imaging the margin” we used gilding tools to press the texts into large hand made pieces of paper, an other way of printing. The work reflects on the current marginalisation of refugees forced to flee their homes and cross national boundaries to escape war and persecution. I made collages and drawings that were then put together into a video projected on 5 large hand-made, watermarked, paper panels. 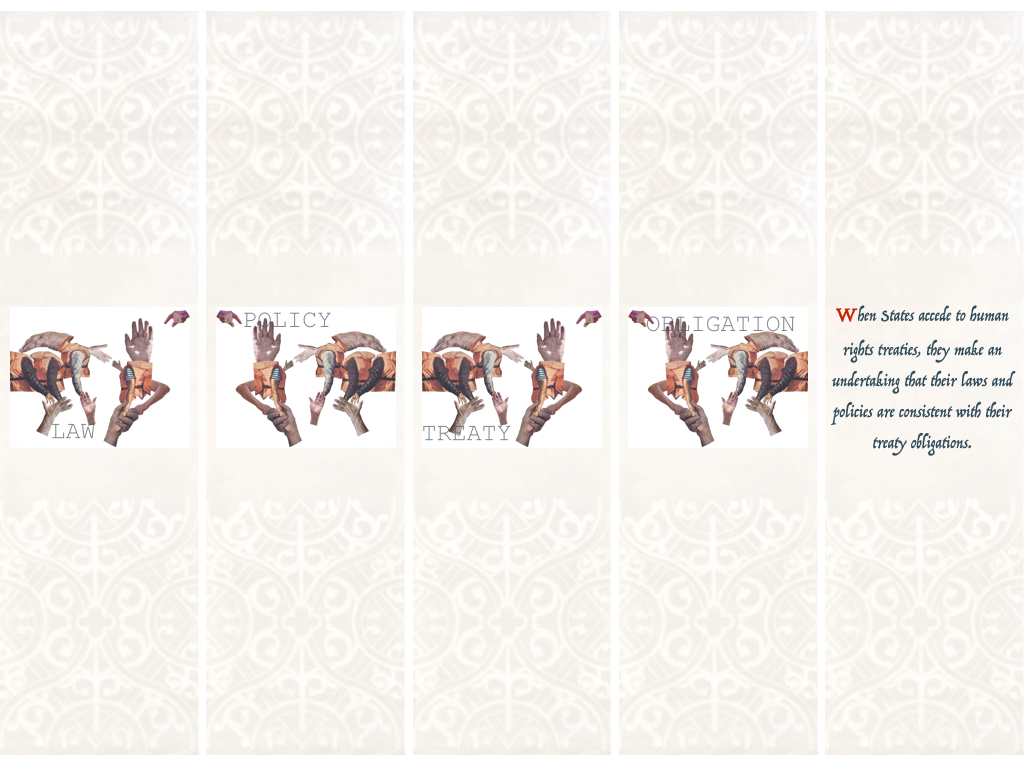 “Imaging the Margin” still from a video.

Currently I am working on a project to be exhibited at Orange Regional Gallery in June. I am drawing in gouache the Jali patterns on the photographs I took in Rajasthan, India. The “Jali” is constructed from geometrical patterns and used as screens on windows. 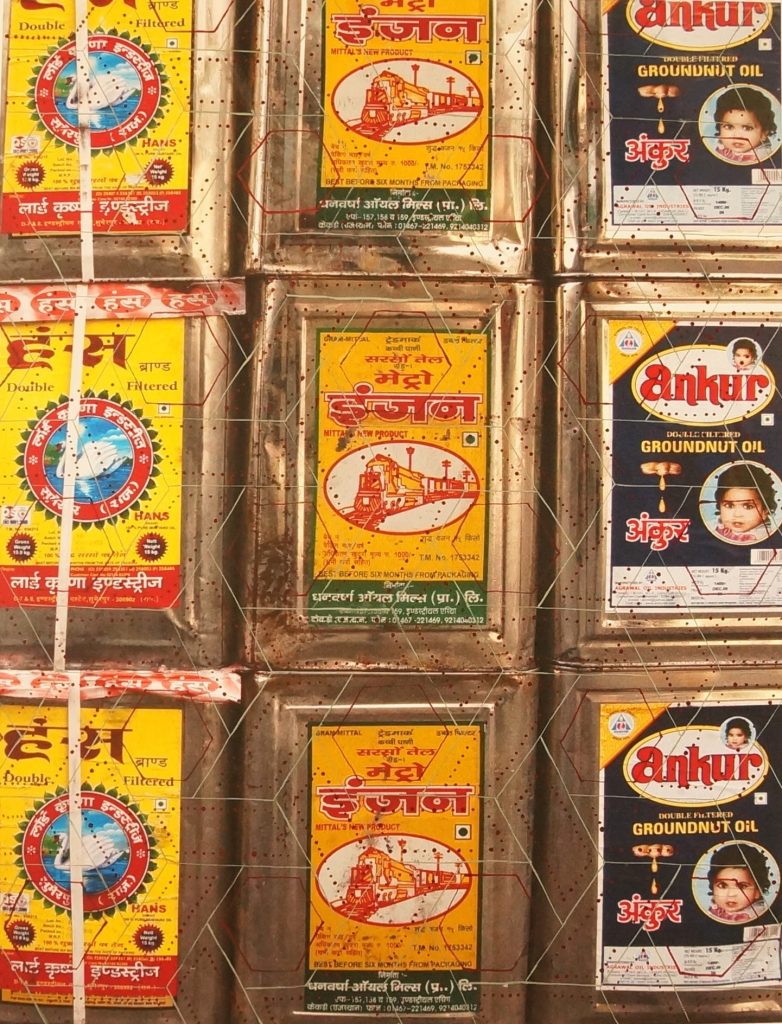 You continually used Archives as a source for your work.  Can you discuss the process you to using the Archives in you work Quarantine Station in Manly?

Because my work is about journey, I was very interested to find more information about the place, I don’t use all the information I gathered but it informs my work, TO trigger imagination or bring on more questions! When Katherine Roberts invited me to be part of the North Head Project I thought, great! I could use all the research I did about 20 years ago. With the 10 artists involved in the project, we had a 2 days residency at North Head and stayed at the Quarantine Station. We had a tour of the Quarantine Station with rangers and a tour of North Head Battery with an historian. In the end I started a new body of work, a continuation on my previous exhibition. If I used the Archives extensively with the first exhibition the Health Department website provided me with a lot of information I needed. I would say the initial research helped me with a strong knowledge of the place and made it easier to summarise and focus on the disinfecting shower one of the key buildings I chose to work with. All migrants, who stayed at the Quarantine Station had to have a carbolic acid showers. I suppose I am the one creating the archives by recording the surface of the shower blocks. I have chosen to work with hand-made paper: it is not only a surface on which to write and draw, but it adds the layer of memory of my hand casting the paper, reading like Braille on different surfaces. It allowed me to record the shapes and details of the place, evocative of words: casted corrugated metal from the shower recess, bolts and nuts are punctuations of migrants’ stories.

Part of the work is a set of plates telling the stories of viruses. Their images as well as the drawings of the animals responsible for carrying those different viruses, look intriguing served on a plate. I wanted the overall experience of looking at them no to be perceived as a threat but similar to the first mouthful one eats: it is only when you get close that you realise it is too late.

Away from paper you have uses Perspex, but you have continued to use words discuss. 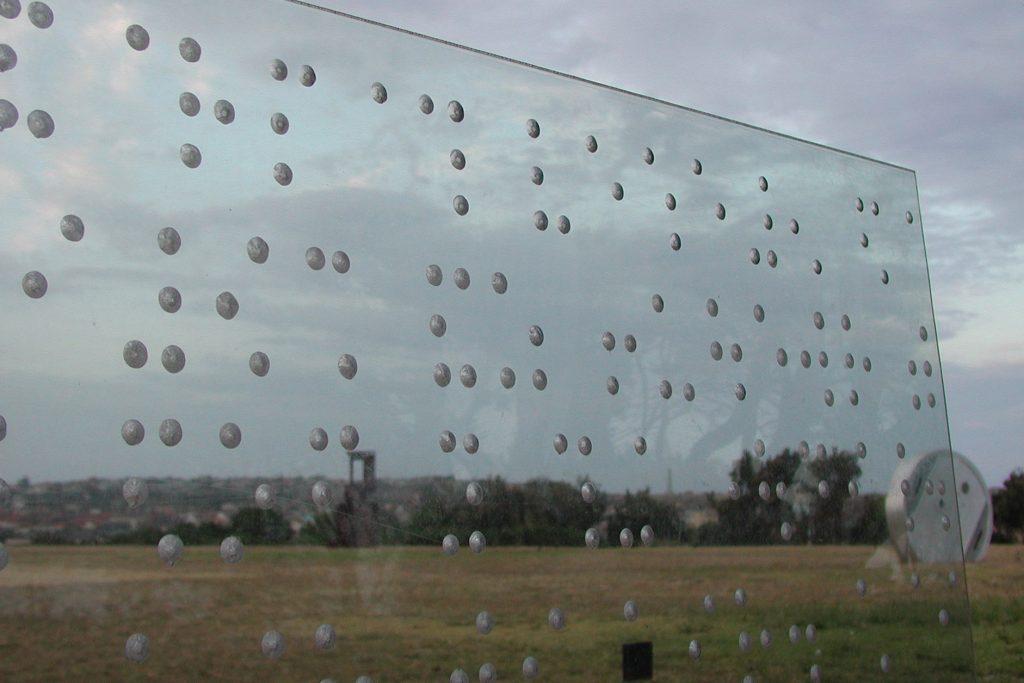 I have used Perspex only once in my work so far apart from drypoint on Perspex plate. The work was about the two senses, the sight and the tactile. The text was written in Braille on the Perspex, the transparency of the surface was a very important element of the work. Only a person visually impaired could understand because the surface needed to be touch to be understood and someone who could see couldn’t read the text. I titled the work “the invisible pathway of words”. 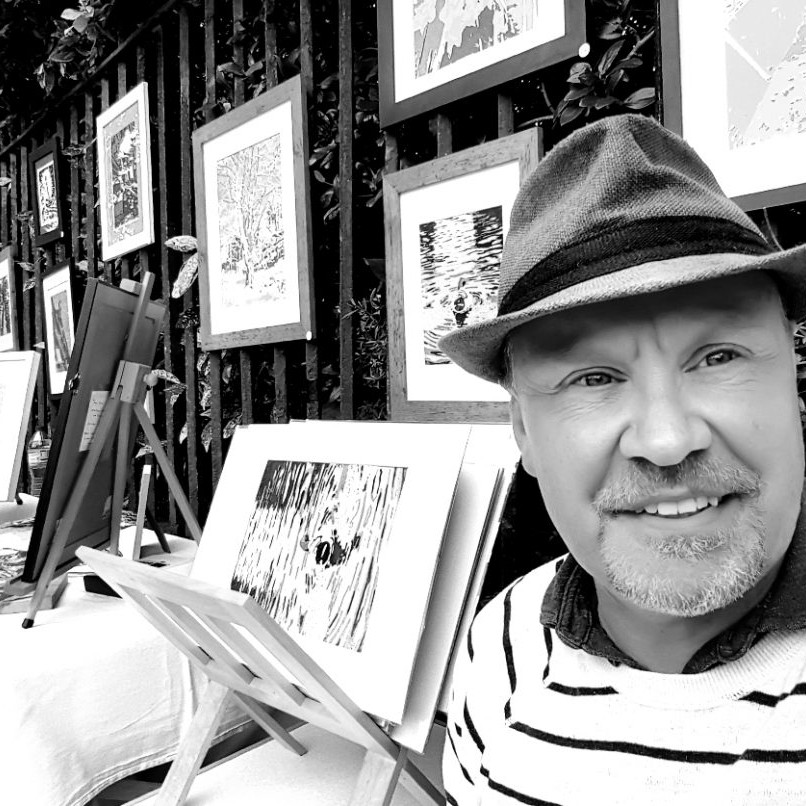 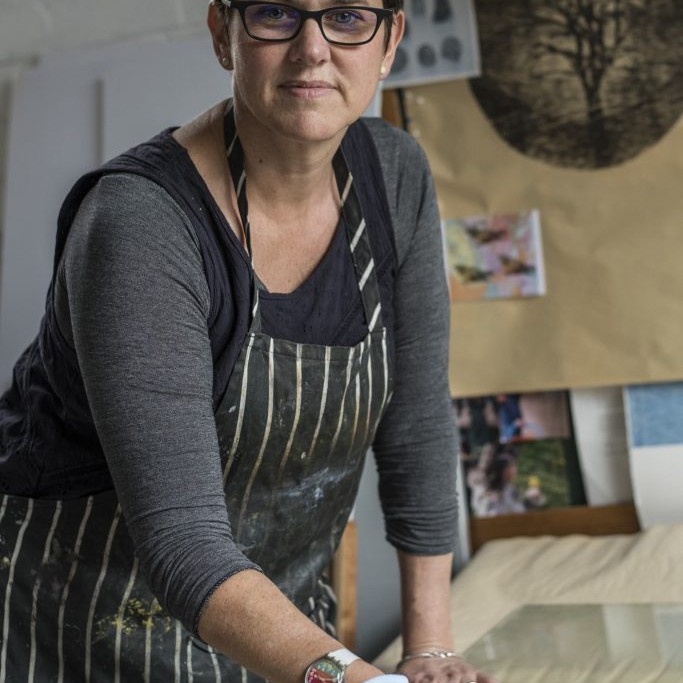