Michael Donnelly, Melbourne, AustraliaMichael Donnelly works in several fields of the arts - While his art has been in several solo exhibitions since 1984 as well as group shows in Australia and the USA. Michael combined his art practice working as a Visiting Teacher in Vision Impairment and in the Support Skills Program at the Statewide Vision Resource Centre.Zoneone Arts is delighted to bring Michael Donnelly to you… 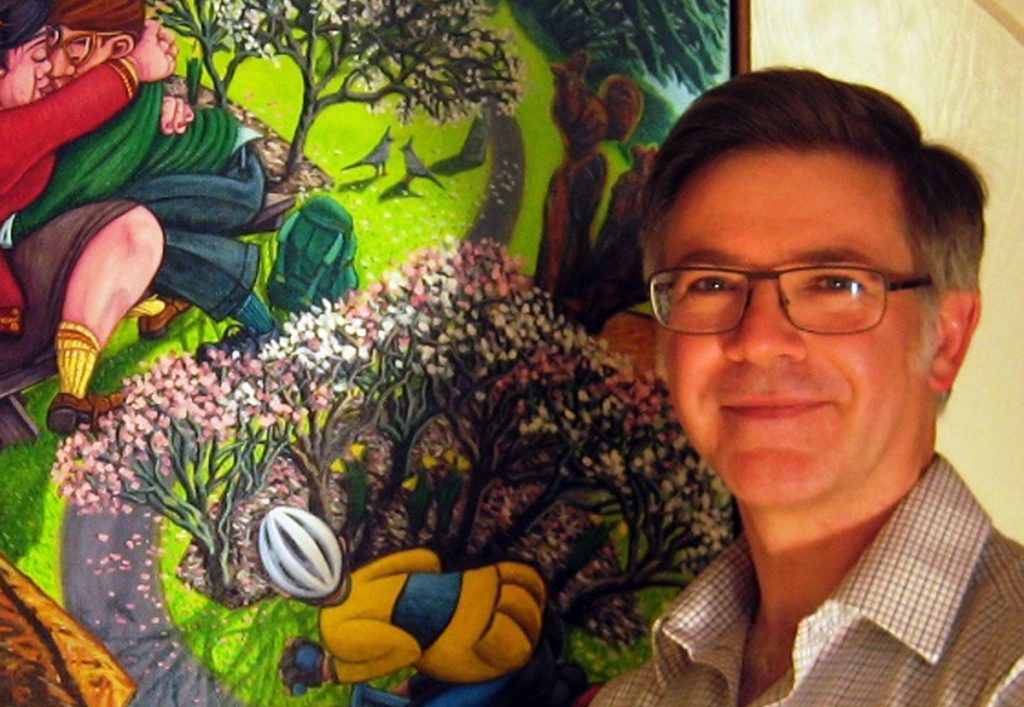 What art qualifications do you have?  How did you decide to become an artist?

I have a degree in Art Education from what was the Alexander Mackie or City Art Institute in Sydney from the early eighties and a post grad dip in Fine Art, Painting from the Victorian College of the Arts (VCA) in Melbourne from the mid-nineties.

I spent much of my childhood drawing and making stuff in and out of school. In the last years of primary school I discovered that there were such things as artists and galleries and then in high school I had a couple of enthusiastic art teachers who modelled a possible way forward.

Do you have a mentor or have had a mentor?

In my art making, two ‘mentors’ have been significant. In the late eighties / early nineties I often attended life drawing through the NGV Society and the classes were tutored by Chris Dyson whose laid back but perceptive approach was very encouraging. Upon completing my post-grad course at VCA I was invited to take part in a new mentoring program and was paired with William (Bill) Kelly, a former dean of the College, who has a strong human rights / social justice bent to his work but is a very gentle and thoughtful teacher.

I was also fortunate in working alongside a number of very generous and committed artists in my post-grad course that led to ongoing and encouraging friendships.

How do you achieve a good scale?

I have always made pictures the size I thought they needed to be. As much as possible though I try to keep one dimension to less than the four foot width of my Tarago’s back door.

Can you expand on your work, ‘Winter, Box Hill Gardens’? 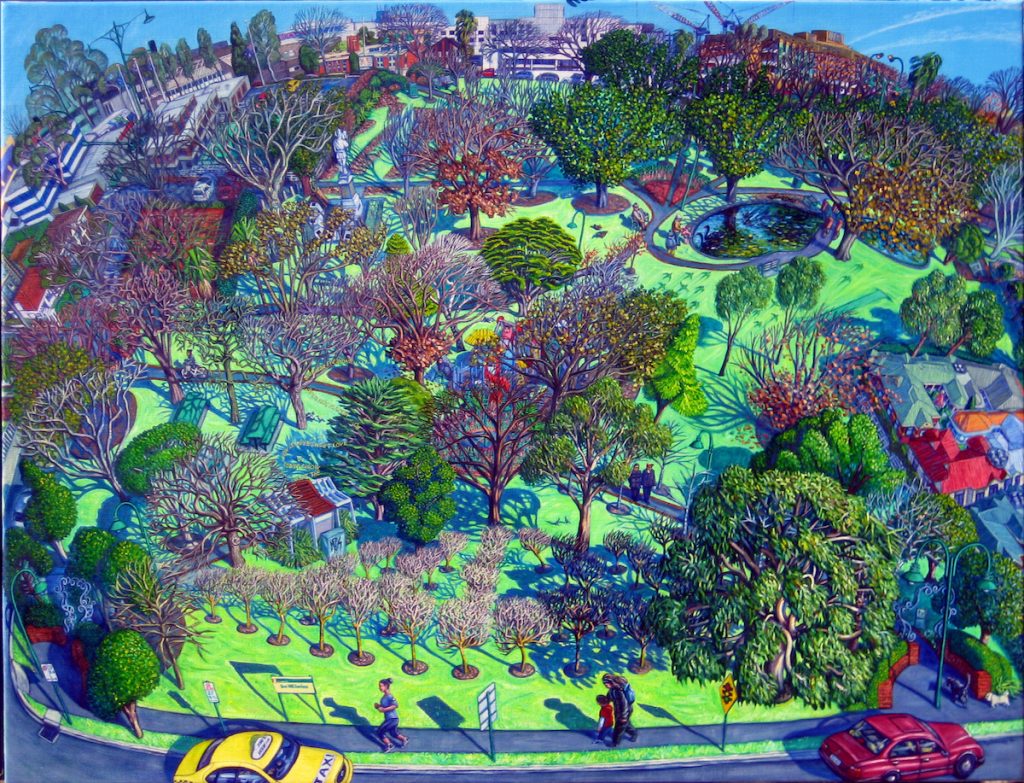 ‘Winter, Box Hill Gardens’, was a centrepiece for the show, Suburban Spaces at Chapel on Station Gallery, Box Hill, in 2014. Following a chance drive-by of the park a year or so earlier I wanted to paint the scene, capturing a sparkling winter’s morning at the gardens. My paintings often end up taking a “bird’s-eye-view and this one is experienced from above Station Street looking across to the western boundary the gardens at Nelson Road and Box Hill Hospital. At the top of the picture, a strip of winter-blue sky contrasts with the whites and tans of the hospital buildings and office blocks of Box Hill, partly screened by various trees. In the top right corner are a couple of con-trails from planes travelling to or from Tullamarine airport. The park is laid out in frosty pale greens and yellows, richly populated by trees, some in varying states of autumnal loss of leaves, and criss-crossed by asphalt paths, lined with red brick pavers. In the foreground of the park is a small orchard of fruit trees, some just starting to blossom. There are signs of early morning activity, despite the cold. A jogger with her hair in a bun, a mother and her school age young son, and some small dogs travel along the Station Street footpath while a few other people wander along the paths across the park. A pair of old men supervise two young children near the duck pond in the middle distance to the right, while a grandmother watches her charge on the play equipment in the middle of the park. Other incidental events create vignettes in between the trees. From the automatic toilet block to the lower left of the painting, emanates the lyrics from a muzak tune that plays when the toilet is occupied. The flowing text of the lyrics winds its way through the branches above: ‘What the world needs now is love sweet love, no, not just for some, but for everyone.’

Discuss how you use light to show the time of day. 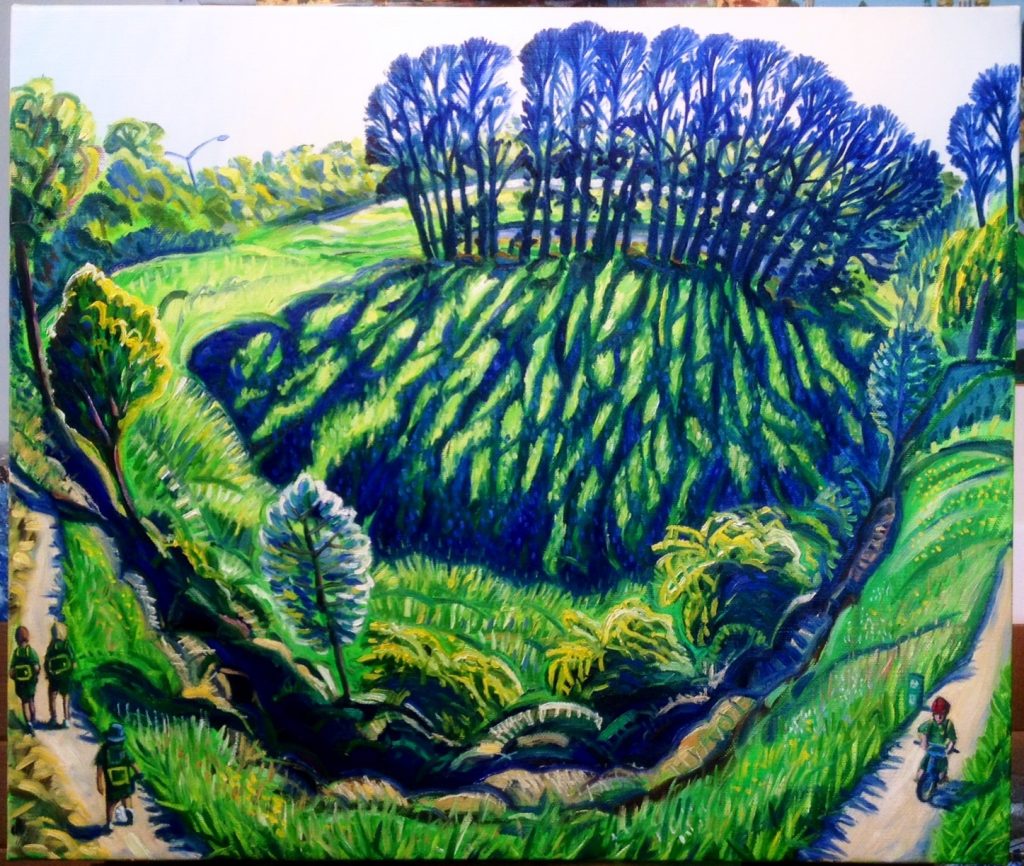 This scene is one I often see on my bicycle commute up to the Statewide Vision Resource Centre in Donvale on Friday mornings. There is a wonderful remnant ribbon of pastoral land, particularly on the south side of the Eastern Freeway. It is quite a lush green stretch divided by vestiges of the giant pine windbreaks planted by the farms and orchards that were originally in the area. One of these stands of trees I sharply silhouetted in ultra-marine against the lemon-yellow white of the rising sun sky in the background of this painting. The shadows of the twenty or so trees stretch forward to the viewer in blues, violets and greens down and across a sloping field that descends to a small creek that curves from right to left across the middle distance. In the foreground, a path appears on the right, disappears and then reappears up the lower left side of the painting. Along the path three young students are chatting and kicking a soccer ball on their way to school while a young lad is bicycling along behind. They are all bathed in that bright morning sunlight.

Coming originally from Sydney, living in Melbourne has given me a greater appreciation of the seasons. Because many of my paintings stem from encounters at a specific time the coinciding seasonal differences and weather conditions become quite important. Knowing where the light is coming from and how that is affecting the foliage, shadows, and colours in a work are taken into consideration, especially when the perspective is sometimes bent and distorted to embrace my understanding of the picture’s narrative. 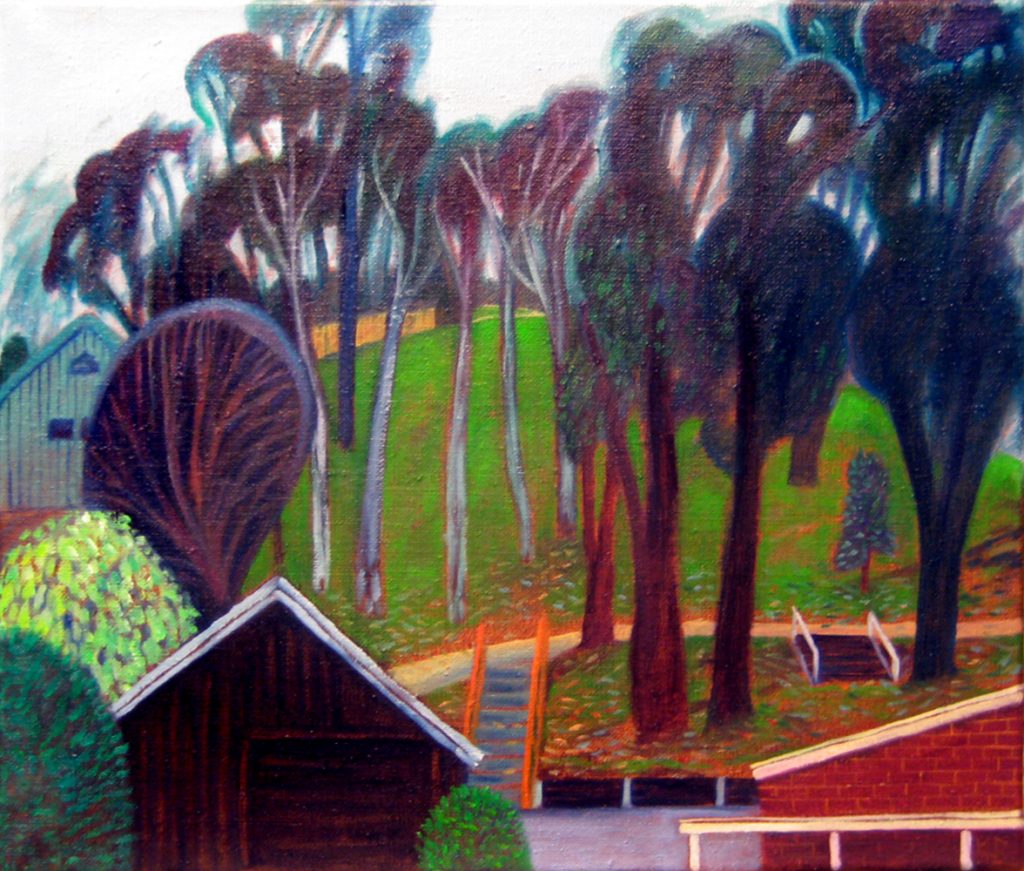 This small square painting came out of visiting the Victorian country town of Yea, on a misty winter’s day in July. The scene is from near the centre of the town but showing part of a hillside and the grounds of the local school. The mistiness meant tree tops were very indistinct blending with the grey sky and, despite being the middle of the day, the colours are dark and intense. 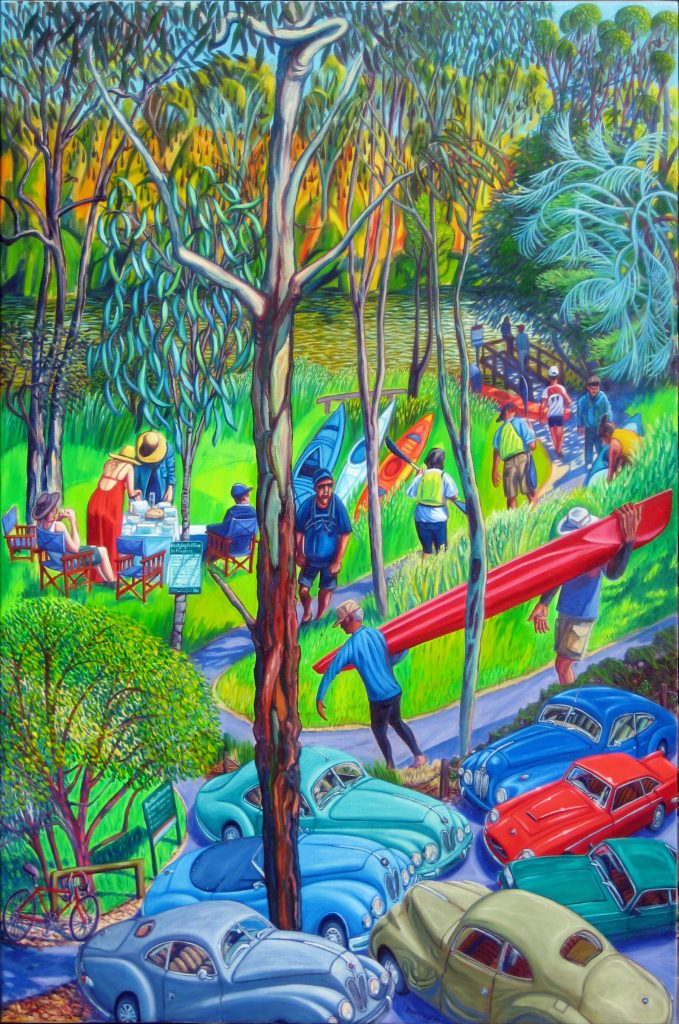 In contrast, this large painting was inspired by a chance discovery on a late spring day when there was more than just a promise of summer in the air. Driving into a reserve on the Yarra River in Kew we encountered a gathering of the Bristol Owners Club of Australia on one of their outings. The gleaming rounded, seductive shapes of these classic British motor cars greeted us as we entered the carpark. We then took in the scene closer to the river where people were preparing picnics and canoes and kayaks were being readied for launching. In the background and creating a continual cacophonous white noise were hundreds of fruit bats or flying foxes, hanging from the native trees, mostly on the far side of the Yarra which was bathed in bright sunlight. Many of the fruit bats appear as dark tadpole or tear-drop forms contrasting with the bright yellows, oranges and greens of the foliage on the Alphington side of the river. The Yarra is a dappled mix of olive and darker greens and khaki colours, along with reflected light blue sky and bright yellows. The picnic grounds in the middle distance are bright lush greens with the picnickers in contrasting reds, blues, whites and fluoro yellows of safety vests, all heralding the summer season. The Bristol cars are a mix of glistening blue greys, bright blues, jade greens, reds, dark greens and blues and ivory yellows, some modified with opalescent and metallic oil paint. 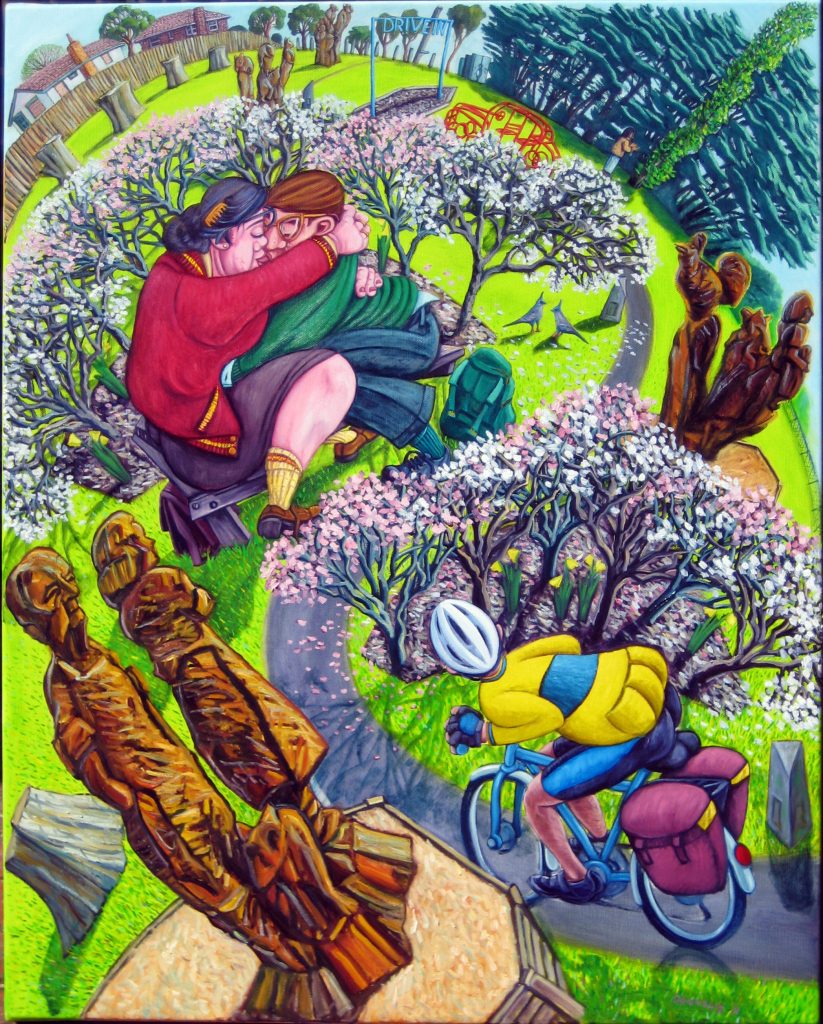 A celebratory painting partially based again, on my commuter bike travel to work. The setting is the Gardiners Creek Reserve History Park, between Burwood Hwy and Highbury Rd, where the park contains a number of public sculptures, including carved wood sculptures from remnant Monterey Cypress tree stumps by sculptor, Damian Curtain. A cyclist peers around a bend planted with pear trees in blossom and spies a young but clumsy couple of high school kids in a passionate embrace on a park bench. . .

Expand on your use of people in many of your works?

In various works, people have been at times the focus or major subject of the piece or, on other occasions, part of the warp and weft of the work, perhaps equal in significance to a busy magpie or some of the street furniture in a scene. However, the relationships they have with each other, the environment they are in and, in turn, the viewer, are always important.

In ‘Resting, in Brunswick,’ a young mother is seated on a picnic rug nursing her infant while in conversation with a young African man. Just beyond the park gleamed the Protection of the Most Holy Mother of God Orthodox Church. I did not know these people, nor did I make contact with them or take a photo of them, or anything, yet I felt I had glimpsed what seemed a ‘vision’ and the whole artistic tradition of the Holy Family Resting on the Flight into Egypt, due to Herod’s massacre of the Innocents, sprang to mind, and its strong associations with the plight of modern-day seekers of asylum. I later scribbled a sketch and came back to photograph the park and the church, but the ‘family’ group were created from memory. 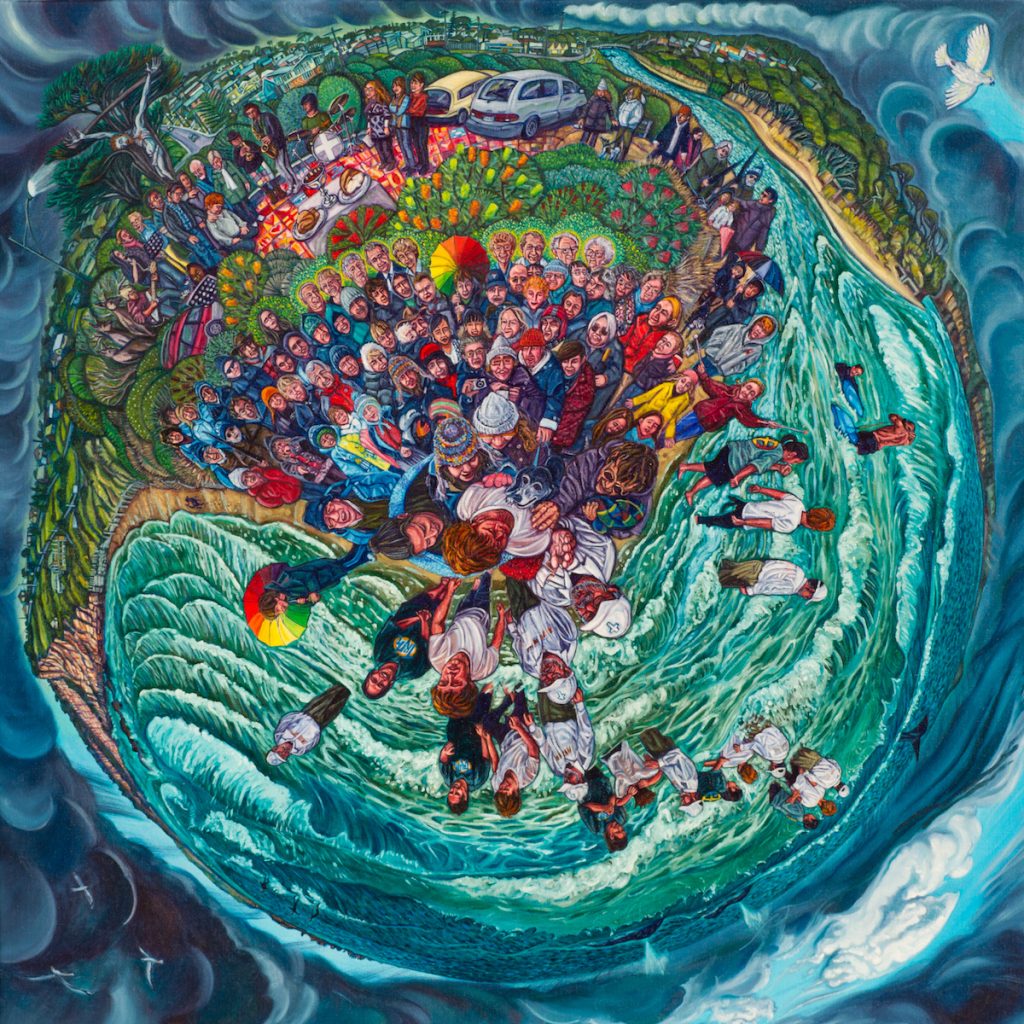 ‘Baptism at Anglesea’ is a celebration of the baptism of our younger son in 2009 while on a church family camp at Anglesea on the Victorian surf coast. In some ways it is a ‘sequel’ to my 2006 painting about my two older children’s baptisms in the Yarra River. The painting draws upon links between baptism death and resurrection, of dying to self and being reborn, of our localised and specific experience of events and rituals alongside the great story cycles found in the Bible. It also operates as a bit of a ‘historical document’ as I ensured that all members of our family and the congregation that attended the rather blustery, storm-swept event were included in the narrative with its circular, cyclical composition. 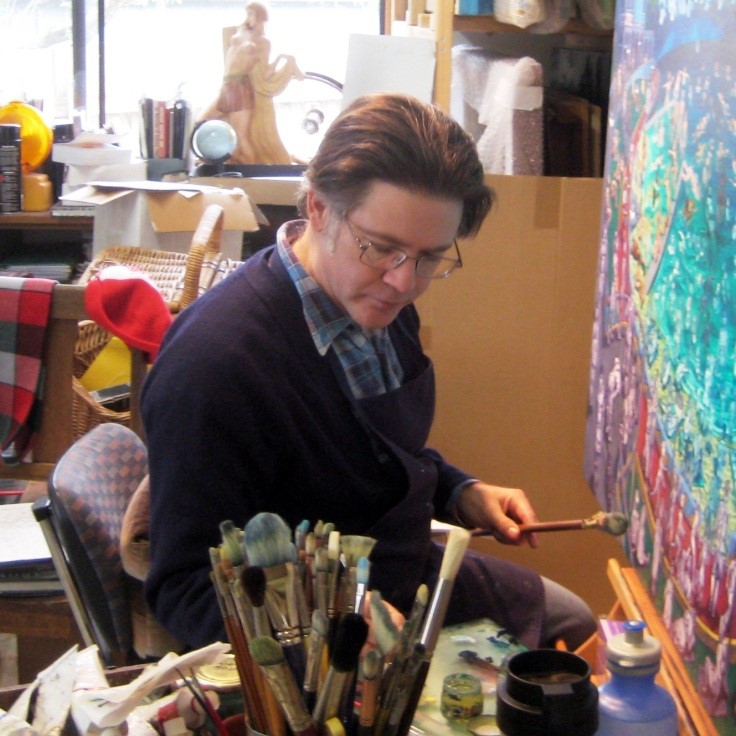