Melissa Selby Brown, Sydney, AustraliaArt materials are always in the luggage when travelling, as are the cameras. There is always plenty to see which calls out to be painted. Sometimes there is time to stop and sketch other times a rapid shot from the side window of the car can suffice for a record.Zoneone Arts is delighted to bring Melissa Selby Brown to you… 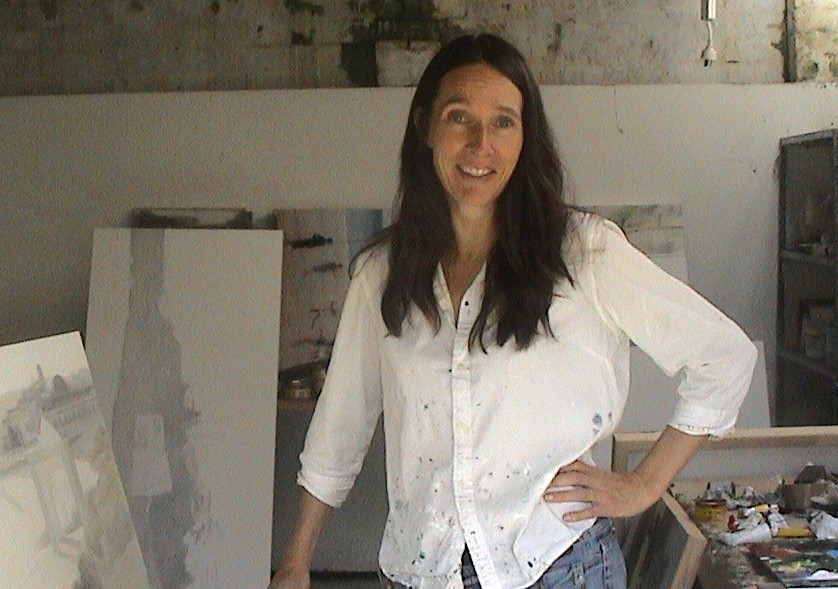 Discuss your series, ‘Outback’, taking us through the process from the road trip to the completed paintings.

The prosaic fact of our daughter getting her learner drivers licence and having 120 hours of assisted driving stretching before us initiated the road trip. We started from the Sydney coast where we live and drove inland for 2 weeks.

Art materials are always in the luggage when travelling, as are the cameras. There is always plenty to see which calls out to be painted. Sometimes there is time to stop and sketch other times a rapid shot from the side window of the car can suffice for a record. I don’t do oil painting ‘en plein air’ as I prefer to take my time in the studio. So when I am sketching I use gouache. I prefer gouache to watercolour as I find it is more flexible either velvety opaque or luminous and translucent. From these sketches done in situ I continued working first in a series of gouache paintings in the studio and then on to oils.

We passed through a fair range of landscapes in that trip but the one I have returned to paint repeatedly, when back in the studio, is the Mutawintji Gorge where we camped. The riverbed is deeply etched into the plains creating a magnificent sinuous space. It has an aura of solemnity and gravitas. 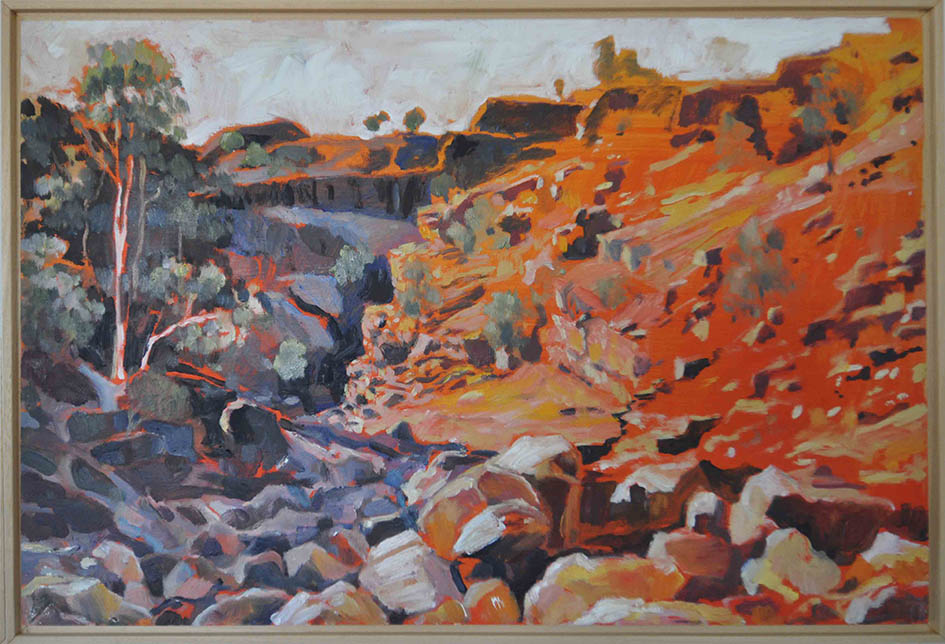 Colour is important in your work both very bright and also muted colours, expand on this.

Capturing the mood is critical.

In the outback the stark midday sun drenches the landscape and bleaches the colour out of it.

In this painting I used a technique of building up layers of thin glazes. This has the effect of creating nuanced, subdued colour that has depth. The subtle tonality generates the stillness and awe I felt.

Later in the day the afternoon sun, lower in the sky, brings out the colours in the soil and rocks In this painting of the same gorge the paint is applied in a very different method. I used a vermillion background as a base prime. An echo of reality as the vegetation arises from the red earth. Although the oil paint is applied thickly the warm background hue still dictates the general tone. I found this a pleasing parallel.

You also understand the use of shape can you explain this using ‘Gorge’.

After travelling for many hours each day along dead straight roads on flat terrain, the gorge was an oasis, literally, as it is a source of water and shade but also a treasure trove to all the senses.

The chasm has physical depth and otherworldly deepness. The strength of the water inexorably inscribing its way through the ground is very present. The aftermath of sporadic flooding is evident in the chunks of rock lying at the base of the cliffs, and the fringe of river red gums. The void of the ravine is also very sculptural. 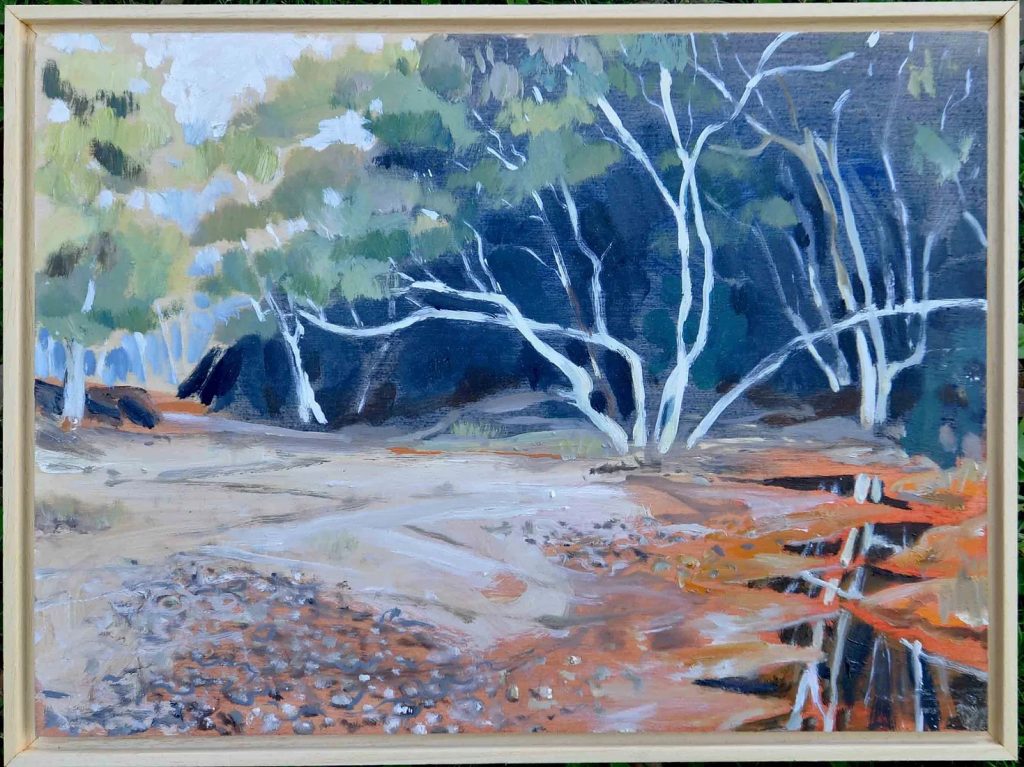 In ’Gorge‘ all these elements were forefront in my mind. The cleft of the gully becomes a contrast of light and shadow zigzagging across the board.

The glow of the tree trunks and the forms of the boulders are features in the mid and foreground that give depth and scale to the picture plane.

How did ‘Art in the Corridor’ develop?

I wanted to do a series of one-day pop-up shows with other artist friends of mine, in any amenable spaces that became available to me. The first space I used was my own corridor. By organising these mini group shows it allows the artists to exhibit on a scale that is intimate. It also allows people to see art in a casual setting as opposed to the formal environment of a gallery.

By having a cohort of artists in differing fields it brings in different viewers and widens your audience. The participants have included ceramicists, jewellers, photographers and sculptors amongst others. Every event is different as the group of contributors varies and each venue brings its own atmosphere to the occasion.

You do both solo exhibitions and Group expiations discuss the pros and cons of group exhibitions.

The group show allows you to open up your vista see what other people are doing and work together with the same purpose. If it is an artist run show the economy of time and resources is significant. It can give the participants a broader scope in all the areas you need to cover from art making through to all the administrative, organisational and less interesting tasks.

It can be difficult to curate and to retain an overall direction or feel. Some works don’t benefit by juxtaposition with others et cetera

Discuss the importance of collaboration in your work.

I don’t collaborate in my work as a painter. I’m pretty much a hermit in that I paint on my own in my studio! 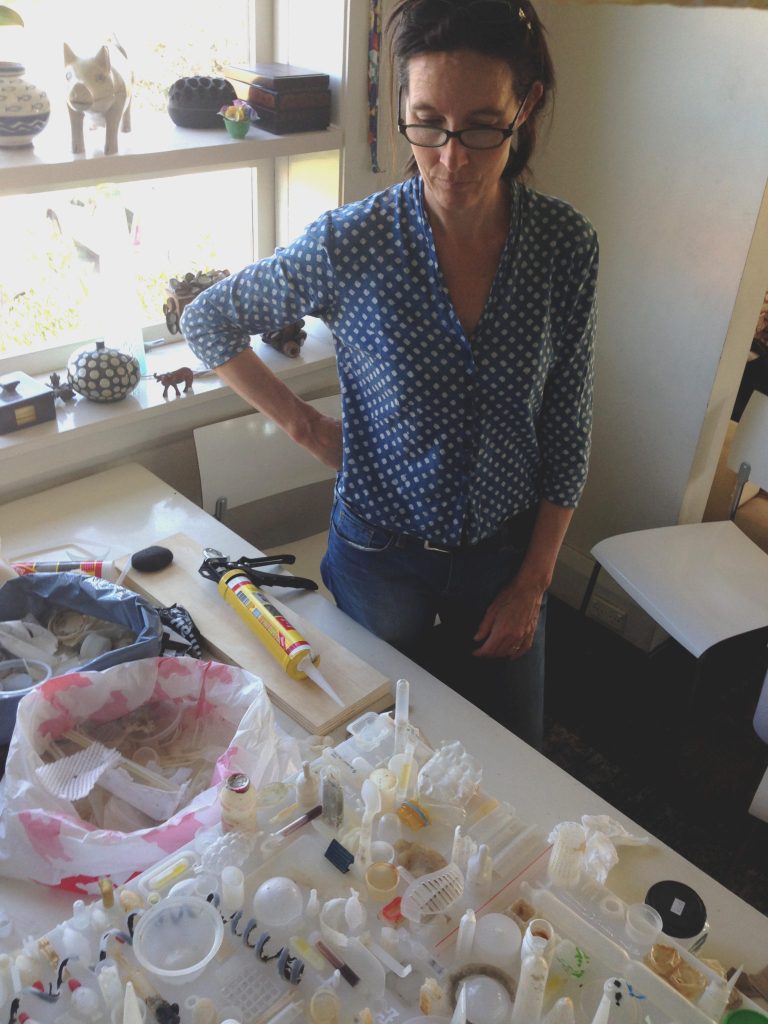 Your formal training was as an architect.  How has this become an interracial part of your art practice.

I think the major influence has been in the subject matter of what I paint. Studying architecture requires a close inspection of the built environment. Not just visually but also in how it is used and inhabited. How different societies live in their buildings and the external spaces created between those buildings. 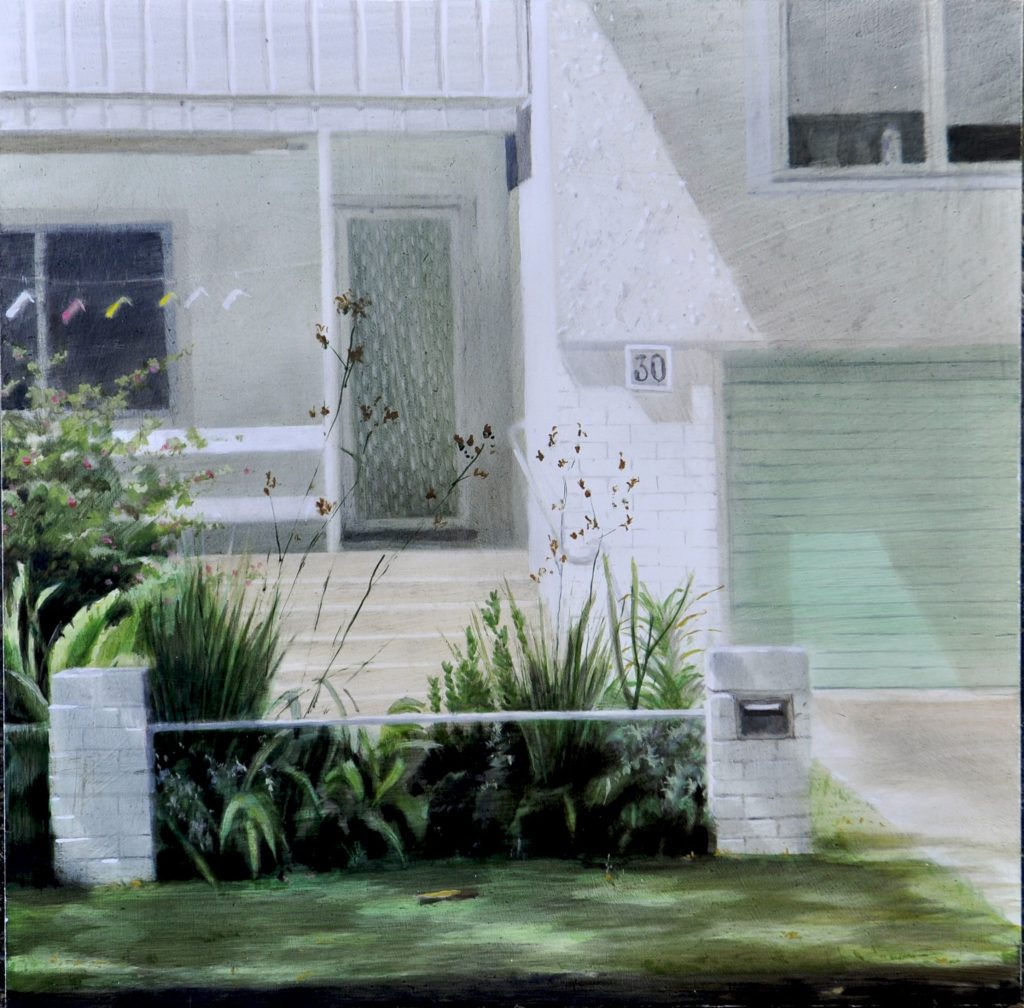 How small details like the clothesline on the porch, the fibro cottage with the brick letterbox in front, are evocative of our culture and make that piece of urban fabric specific to a certain place, city country… 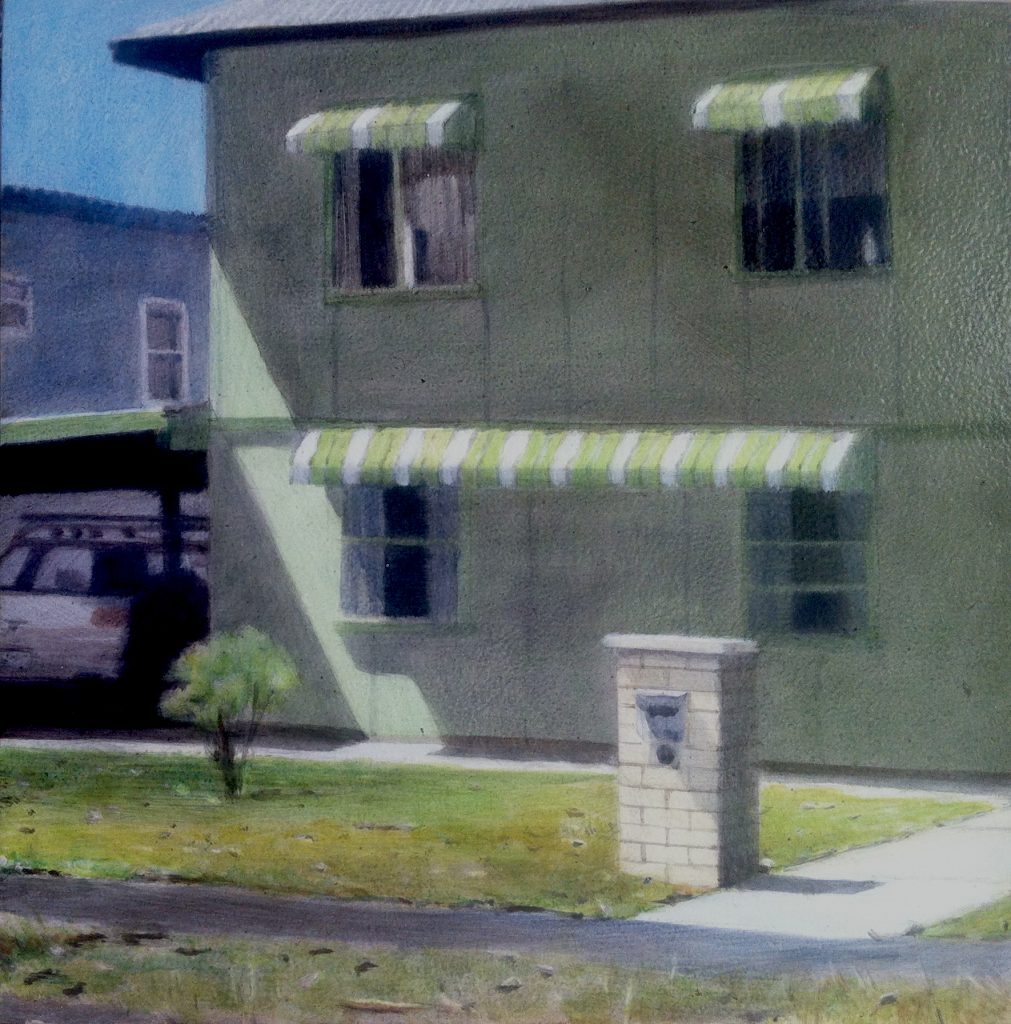 I actually enjoy driving to suburbs I don’t know and just walking around looking at the houses, the front yards, going down the back lanes, checking out the main street going into the mall. There is a wealth of material to translate into a series of paintings.

Have you had your work compared to Clarice Beckett? 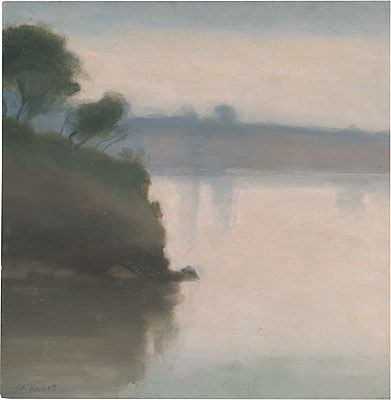 Yes, I love her work; I am interested in the ambience she creates so deftly and her portrayal of the everyday. You add traffic to many of your paintings discuss.

Traffic is all around me and it plays so much a part of our visual vocabulary I couldn’t paint the world I live in without having a vehicle loitering somewhere! They are as expressive of the urban weave as the buildings, the pavement, the pots on the windowsills and the street signage. 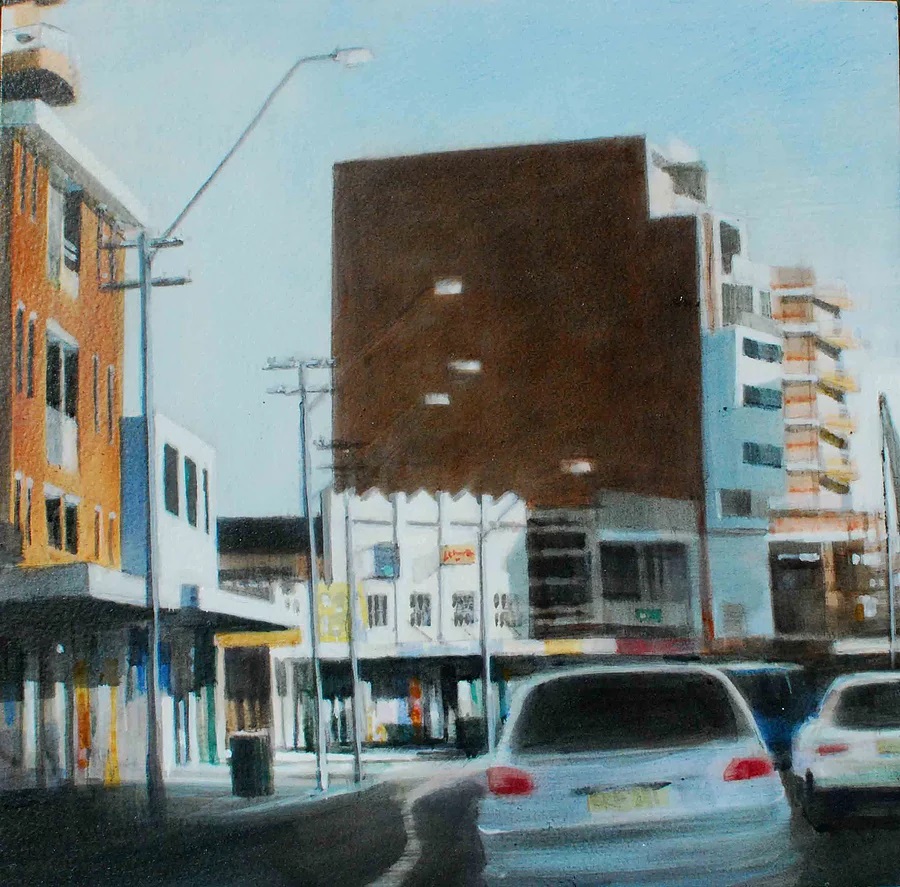 Give your thought on the importance of painting the now, and its importance for the future.

I am attracted to the man-made, the good, the bad and the ugly. I paint what I see and what I feel is representative of today. I more often paint urban-scapes but even when I paint rural scenes I do gravitate towards the infrastructure; fords, bridges, fences, signage et cetera. I like to mirror what I feel is characteristic of here and now. How that will be interpreted in the future is not something I am really conscience of while I am considering what I want to paint, however I do choose to include details in my paintings that indicate the present day vernacular. The use of traffic is a good example because the style of a car really does define an era.

You also paint still life expand on this aspect of your work.

Painting objects in a still life gives a change of scale and control. You get to direct the show! Lighting, content, composition it is all up to you. I generally use typical objects that we all recognise and use ourselves. In the series for the show ‘Assemble’ I used a collection of old drawers. I filled them with an assortment of objects, painted life-size, very accurately, in gouache.

Each drawer had its own story to tell some with children’s scribbles on them others with fantastic paper lining from the 60’s and 70’s. I used theses traces of the drawer’s ‘life’ as a springboard for choosing the types of items to fill them with ranging from the kitchen bake-ware through to children’s toys. In Stationary’ the ink-stained base of the drawer lead me to choose the ubiquitous ball point pen, lead pencil, box of paperclips, plastic ruler and so on and paint them directly onto the weathered board. 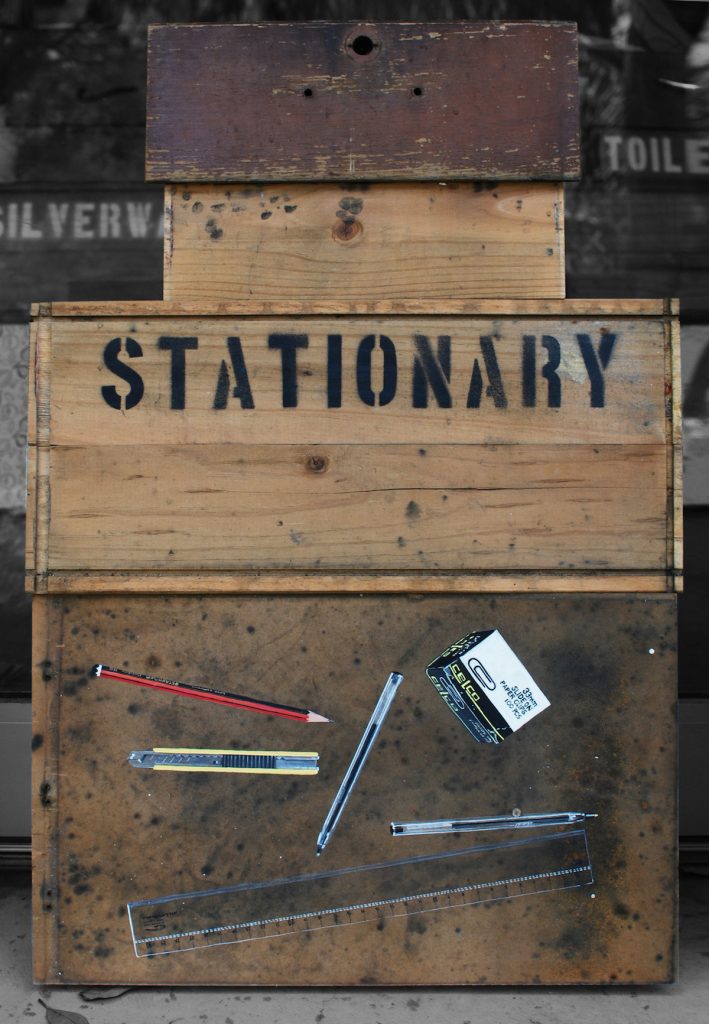 It was fun tinkering with the difference between what was real and what was painted, for example sometimes painting false torn lining or placing the painted object strategically on a scratch or chip… I like the playfulness of the true to scale images on a found object that may have contained just those items.