Mark Noble, Somerset, UK“I am inspired by the sheer grandeur of the sea and weather, it’s ever changing moods fascinate me, it never settles the colours can change within minutes, it’s so inspiring to watch.” Mark NobleZoneone Arts is delighted to bring Mark Noble to you… 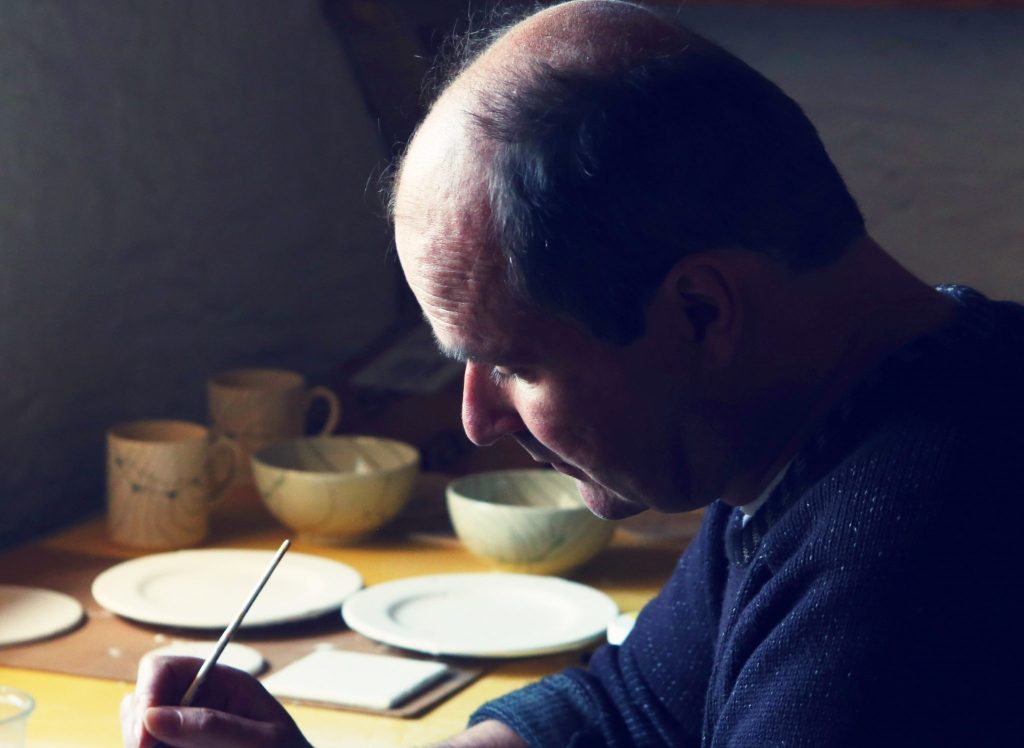 |In Ceramic Artists, Painters
|By Deborah Blakeley
John Constable understood Turners vision as golden visions, glorious and beautiful.  Can you discuss your own feeling related to the visions around you and how you apply this to your art work?

When I am doing a sea painting, I feel the wonder of the setting or rising sun, and the multitude of transitions and colours through reds and blues, yellows and greys.  When I’m by the sea, the changes in mood and movement, the wind blowing in my hair, and the breaking of the waves at my feet, create a soul-calming rhythm.  I can almost feel the Spirit moving in timeless creation as the rhythms of nature motivate and move me.

One of the stories that inspires me was when Turner asked the captain of a ship to chain him to the mast in order for him to feel the full force of the storm.  The closest I have come to recreating that experience of the sublime – the power and beauty – is taking ocean walks in the full force of storms and discovering a serenity in the tempest.

The same can be said of my landscapes, which I also try to experience in the context of the forces of nature.  Early one morning during a violent thunderstorm, I caught a glimpse of the sunrise striking the high altitude anvil clouds above the lightning strikes, and in the midst of the storm the sky over the Mendip hills was alive with warmth and colour. 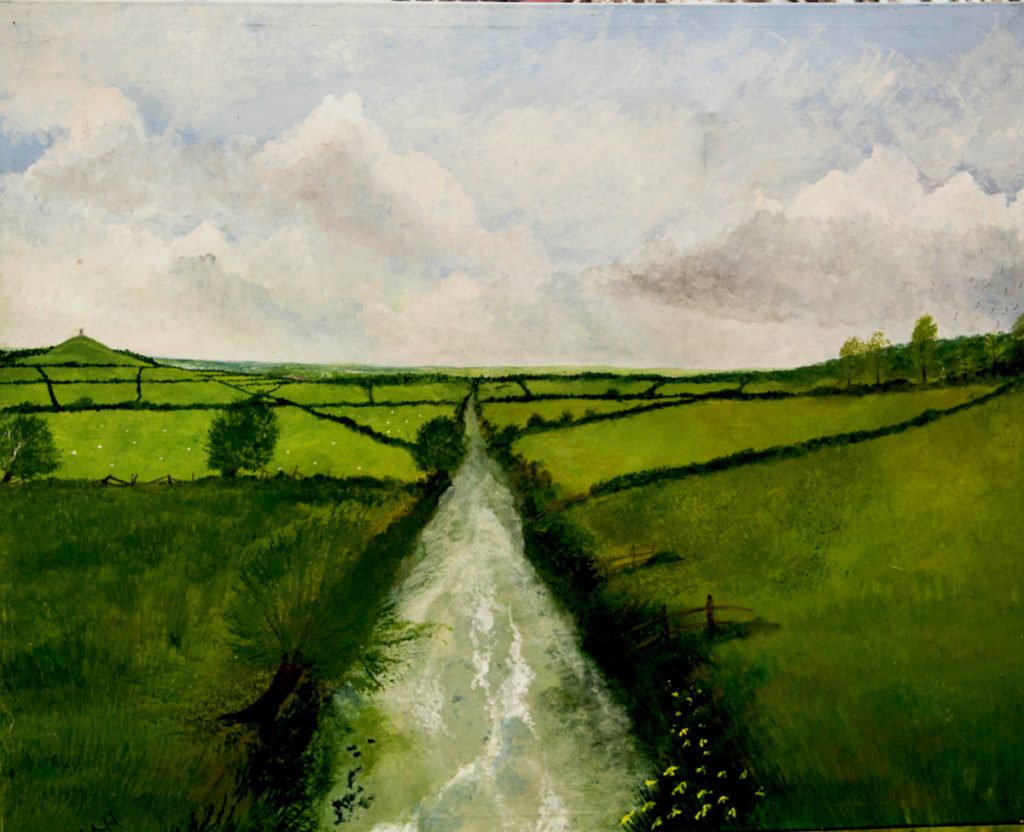 Discuss your painting ‘Storm over the Levels’ in relationship to your previous answer.

“Storm over the levels” is an attempt to express the tragedy of the flooding which struck our community in 2014, but whilst acknowledging the sublime forces of nature which so rapidly transformed the familiar environment.  In my painting I am trying to express the human context for such humbling and remarkable power – power which I sought to experience first hand, placing myself directly in the path of the torrent of a river in spate.  I created tonal paintings taken from observational photography and sketches, with a muted palate in order to express the stillness and drenched atmosphere that followed from the storm. 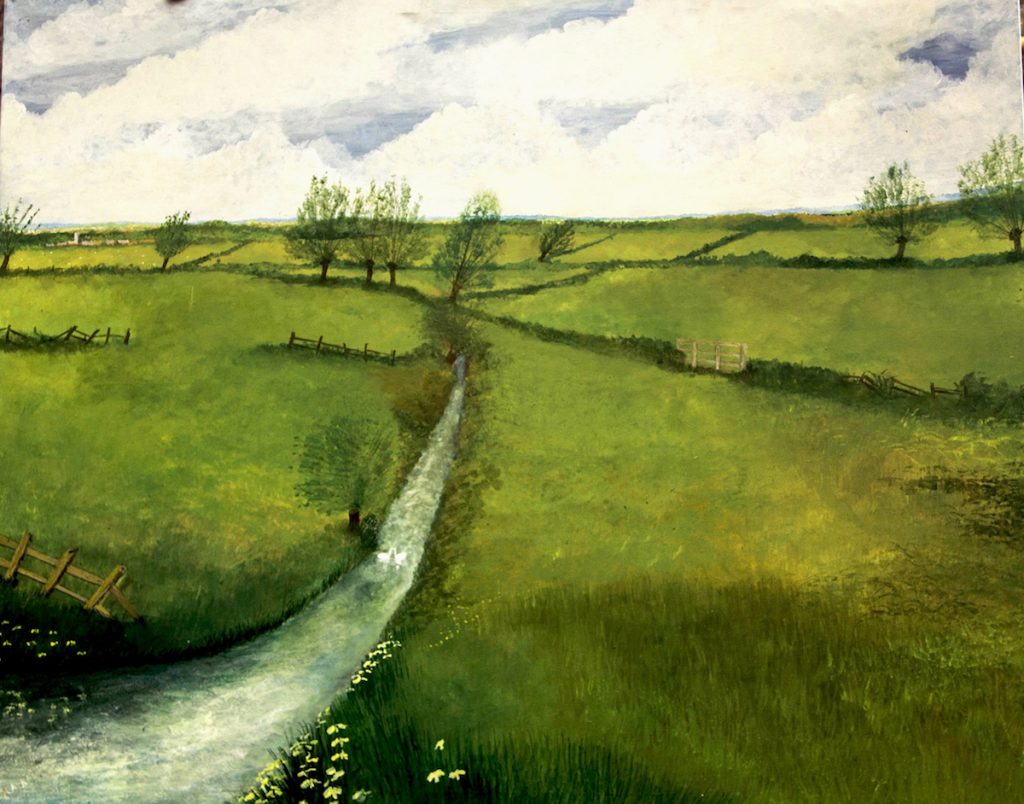 You worked for 20 years in the plastics industry what lead you away?

I parted company with the plastics factory in the aftermath of a divorce which necessitated that I raised my children alone.  It was the catalyst which caused me to begin my artistic journey, starting my studies with college classes.

You also give back.  Explain about your mentor program and how this helps others but also how it has help you and your art work?

A lot of people are scared of creating their own work, and I want to dismiss their fears.  Often I find that the people with whom I work set aside their artistic desires after some negative comment or criticism from a tutor or family member, and I find that destructive seed and try to help them to move beyond it.  As an artist I want to dispel some of the barrier myths which prevent people from exploring their own creativity.  I love to lend my skills and experience to helping others pursue their own creative vision, providing practical tuition and encouragement in the use of media and materials, but also being a positive and enthusiastic sounding board for their ideas.

As an artist I know how easily we can become either blasé or dismissive towards the skills and creative desires we possess, and in supporting others, it reminds me to value and nurture those areas of my own creativity which I have taken for granted or neglected.

Discuss briefly the techniques you use for your work from the that first vision to the work leaving your studio.

In the second year of my B-Tech course, one of my tutors challenged me to do something outside of my usual style, and to develop a semi-abstract painting taking images from contemporary advertising.  Using images of crystal glasses, I took some of the pointed, triangular, forms and rectangles from the images and positioned them with the rectangles over the more pointed, triangular shapes.  As I worked on these images as a collage, I had something of a vision in which the shapes spoke to me about New York with the forms revealing the skyline of the city in the past, present, and future.  The palate I chose was blue, expressing something eternal, and giving me the opportunity to experiment with as wide a tonal range of blues as possible.

“Footprints in the snow” (Inspired by views from the Polden Way) 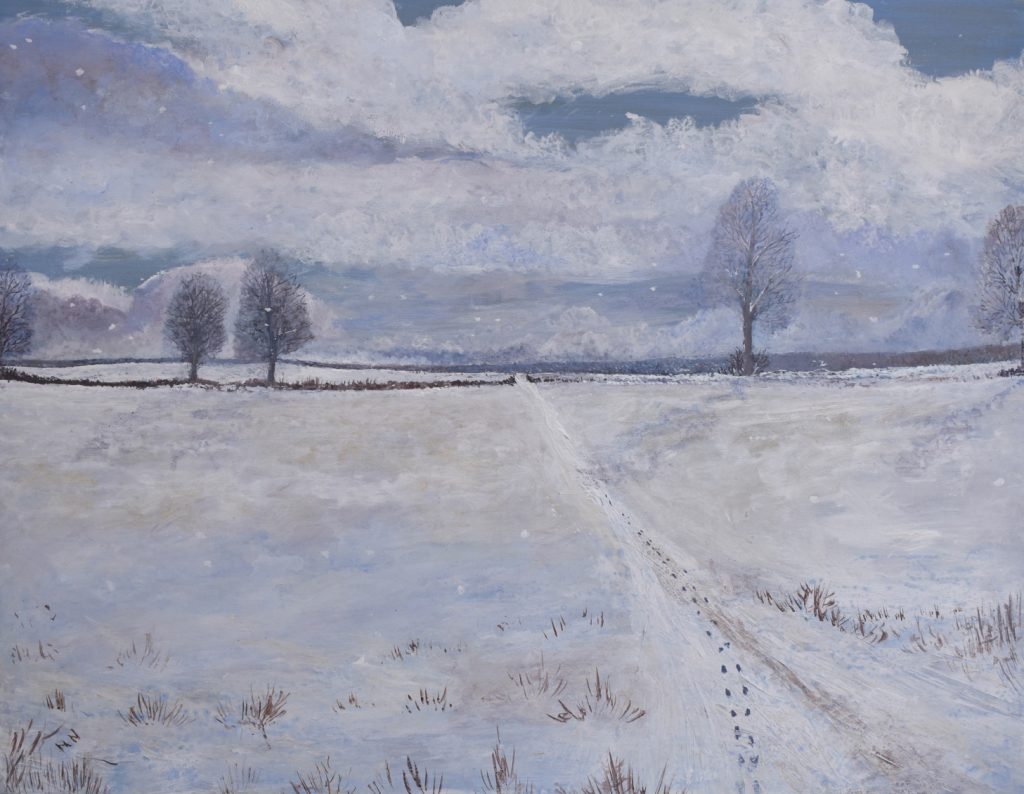 Footprints In The Snow, acrylic on canvas, 40cm x 30cm

The second painting I want to discuss is one based on works by an amateur Somerset photographer, called Ricki Barber, who focuses his work on the rural landscape and environment.  The image itself is of a snowscape, and I was really inspired because of the tonal range of colours throughout the composition.  I was particularly motivated by the enthusiasm of the photographer to work with me, and as an artist I set out in the hope that I would capture something of Ricki’s excitement.  As a child I really loved snow, and find it fascinating as an artist because snow is so rarely considered to be a worthy subject.  Taking one of Ricki’s photographs as my initial inspiration, I began with warm washes, and building up layer upon layer, I developed the painting based on that first image.  Once the work had developed fully in terms of the tonal palate, I began to add scenery from beyond the limits of the initial photograph, but in keeping with the woodlands, valleys, and agricultural scenes common to the area.  The sky and snow layers reflect off one another to produce the tonal richness of the scene.  Central to the painting is a footpath which I hope expresses the human element of the scene, and which represents the journey or process of the painting itself, leading both the artist, and the viewer, deeper into the imagination.

You documented, ‘The Power of Nature’, expand on this natural devastation.

The personal effect of the flooding

How you converted this devastation into art

As a rule, when I work from existing images, I begin by killing the canvas with a series of warm washes, after which I abstract the images into a single simple drawing forming the composition of the piece.  As this process unfolds I develop my own understanding of the concepts and emotional depth of the painting, and this understanding then informs the subsequent colour palate from which the work will be birthed.  Once the initial composition is completed I return to building up layers of warmth or cold, using further more localised washes.

Beyond that point, each work develops along its own unique path, as textured layers are added, and the distinction between media, process, and image begins to blur.  In the same way in which my work celebrates the beauty of the transient or overlooked, my toolkit is similarly simple, with shaving brushes, sponges, cotton buds, and the occasional brush.  Often I can be found working the paint with my fingers to achieve my creative vision.

One of my students has noted that there comes a moment in every work where the influence of the images or concepts which originally inspired me give way to the immediate impact of the forms which emerge as I paint.  Perhaps those moments give a brief glimpse into how the fantastical or sublime appear within the realism of my predominant influences. 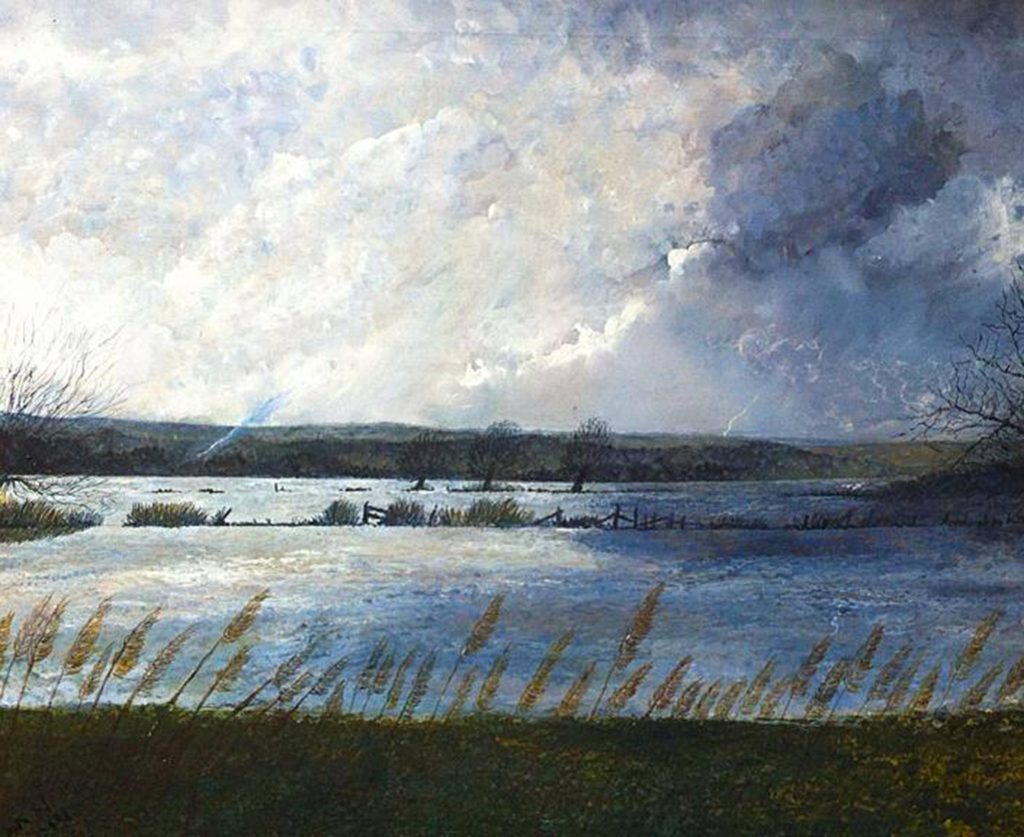 Weather is predominating in your paintings but you have extended this interest and metrological knowledge to ceramics.  Expand on this aspect of your work?

Living on the Somerset Levels, everyone was paying close attention to the once-in-a-century storms, and together with a close friend, I decided to go out to the flooding and speak to the victims, as well as experiencing the transformed landscape first hand.  As well as the obvious power of the water, the wind was whipping across the miles of open flooding from the ocean to the hills, and the light was constantly changing as I sat on a bridge to sketch the scenes around me.  Wanting to get as close to the water as possible, I walked out on an emergency pontoon, and managed to get to a precarious position over the torrent of a river in spate before the bridge was overwhelmed by the rising flood.

My hope, in the pieces which came from those observational photographs and sketches, is that I have been able to express something of the empathy which I felt for the people whose homes and livelihoods had been impacted by the forces which, whilst devastating, possessed a sublime, majestic, beauty.

Discuss how you have used weather mapping and where the idea came from?

When I first started my training at college, I produced a coiled pot, and I happened by chance to etch some isobaric charts into the piece.  The coiled pot lay dormant in my home for many years before my agent spotted it on a shelf, and she suggested the concept could be extended to painted ceramics.  I was surprised, if initially sceptical, but with a little perseverance I came to enjoy the process which combines my two passions, art and weather, and they received a positive response.  The ceramics also play into the particularly British pastime of discussing the weather.  The simplicity of the “weather-pots” gives a different point of access to the themes which predominate my painted work. 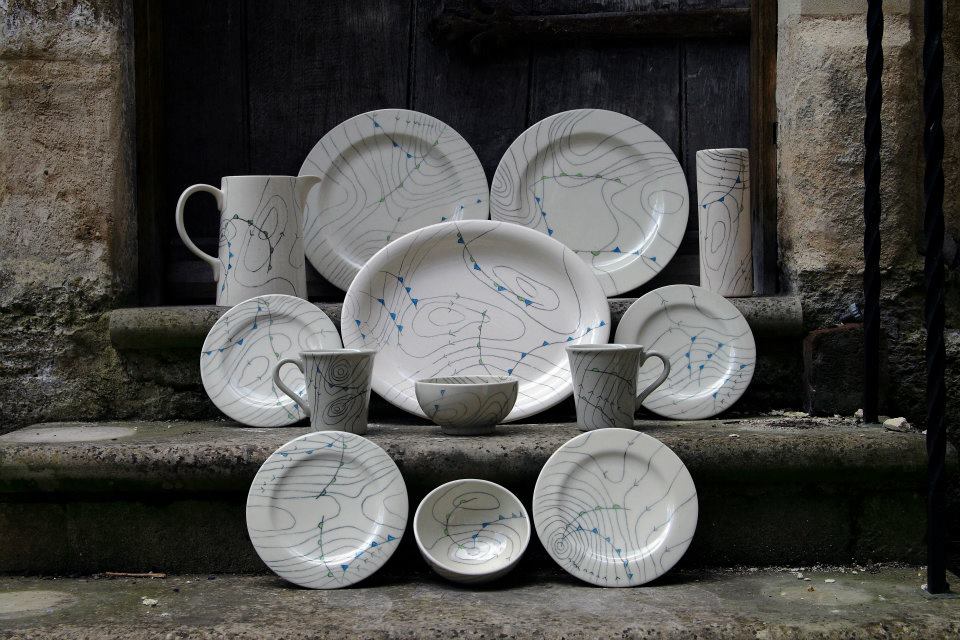 Although not all weather forecasts nowadays show the isobars in the same way as my ceramics, the majority are produced to represent the weather on a specific day (or type of day) as requested by the person for whom they are made, so there is always a sense of connection, and an awareness of the significance of the markings as they translate from the initial weather charts into the finished forms on the contoured ceramic surface. 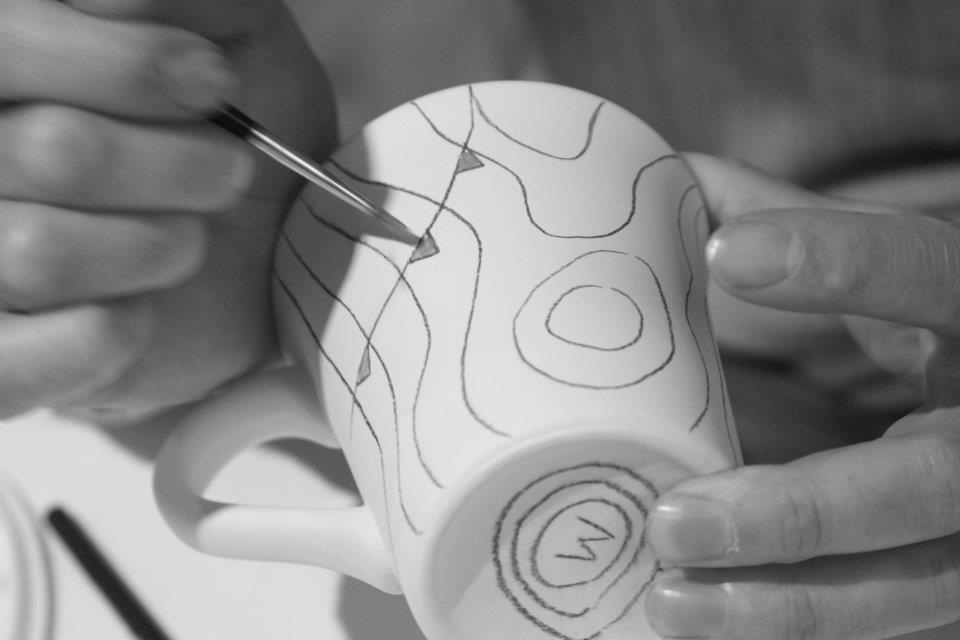 Have you considered having a range using surveillance maps, putting our feet on the ground as well as in the air?

I have played around with it as an idea, however the beauty of the ceramics is their simplicity of form and intent, which would be compromised were the designs to become too complex.

Discuss how the creative process drives you?

When I visited London as a child, we went into the National Gallery, and I had my first encounter with Turner and Constable.  The visions which I saw on those canvases left me speechless and breathless, as my mind and emotions erupted in response to the paintings.  In particular, “The Fighting Temeraire”, with the contrast and application of the paint and colour, created a timeless image of an eternal moment, with the steam from the funnel of the tug blending with the clouds of the heavy skies.  The melancholic contrasts by which Turner articulates the passing of the old war ship perfectly capturing the changing of the guard from the beauty of sail to the utility of the age of steam.

As an artist I try to capture that essence of the sublime, walking as best I can in the footprints of Turner, seeking to reclaim the sensitivities of a lost age for our current transient existence. 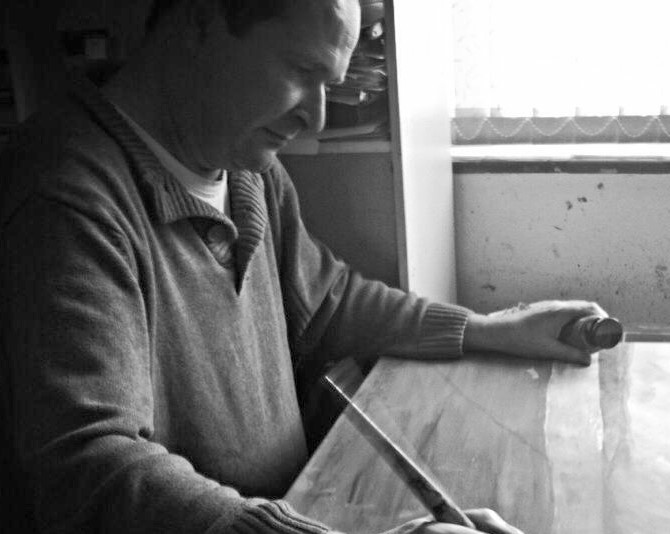 Interview by Deborah Blakeley, May, 2016