Lorenzo Chinnici, Sicily, ItalyLorenzo Chinnici from Sicily began his career very early in 1953 when he was taken by Renato Guttuso and shown how to paint, this was to be the first of many artists who have influenced Lorenzo Chinnici over the years. He has developed his own art and practices in the medium that he feels will best suit the work, from watercolour, murals, and frescoes to oil.Zoneone Arts is delighted to bring Lorenzo Chinnici to you… 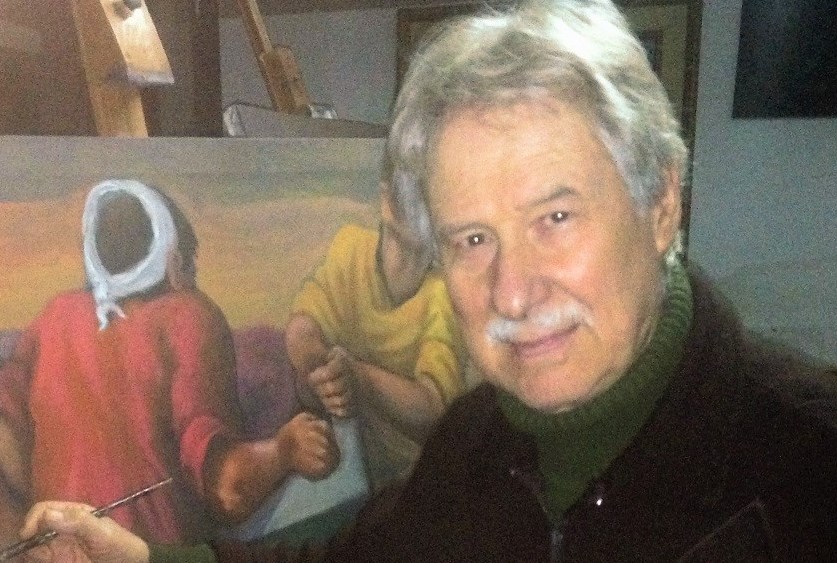 |In Painters
|By Deborah Blakeley
Can you explain about the chance meeting of your son with David Kent’s son in Brick Lane, London and where and how this lead to ‘Synergy of Sons’?

In 1974, I met David Kent during our group exhibition in London. We immediately click and bound. Over the years, we had lost contact. It was by pure coincidence that my son met David Kent’s son in London. If you believe in fate, this is one of the good surprise life offers. Or maybe it was written that we would reunite.In a London pub, my son Francesco was commenting an artwork with his friends when someone joined in the conversation; it was William Kent. After a while, Francesco and William discovered that they were the sons of two painters  who had exhibited together four decades ago. The sons became friends like the fathers, and decided to set up one exhibition in Milan and one in London: “Synergy of Sons”.

In the excitement of the preparation of the shows, I immediately went to work in my studio and started painting again. The effect of “Synergy of Sons” was like a catalyst; I am preparing a major event in Lecco (lake close to Milan) for the summer 2016. I regain such energy.

Discuss one work from ‘Synergy of Sons’ – Pesoadori – fishermen #6?

The artwork Pescatori 6 (Fishermen 6) is one of the paintings that describe my work best. 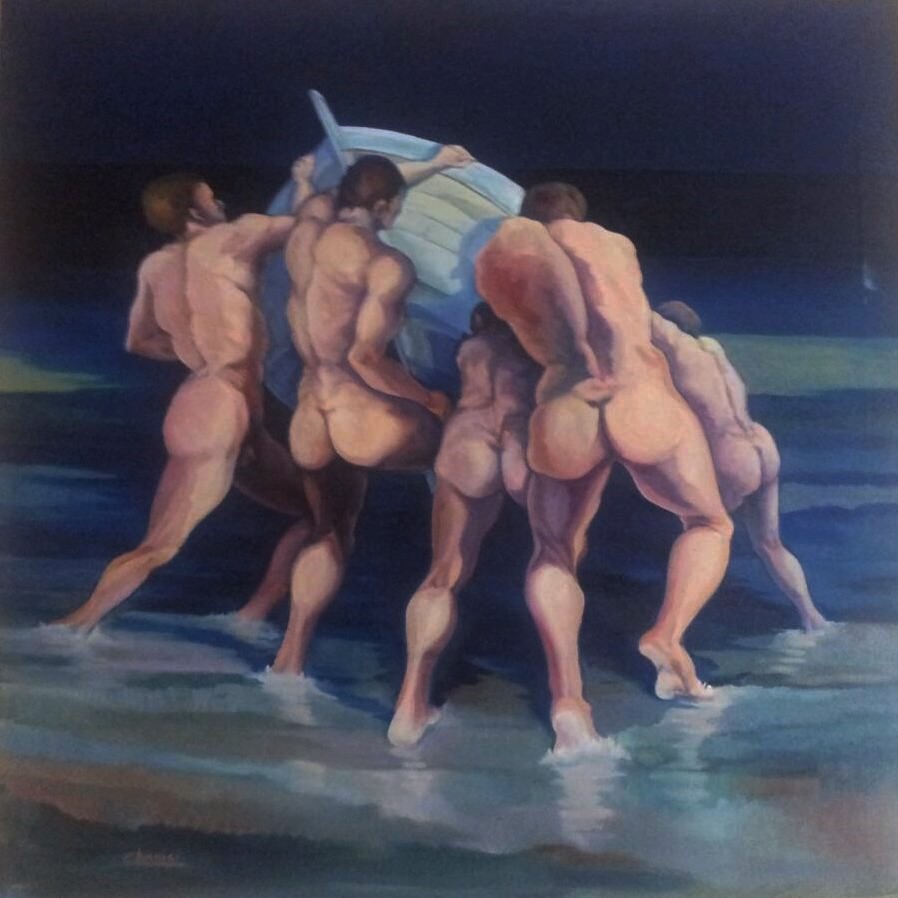 My fascination of the human labour comes from my childhood memories. Since then, I paint the psyche of the figure. I want to show the hard light, the strength of the physical labour, and the energy of those fishermen. It’s a very hard and necessary work to sustain a family. I want to underline the hope for a better day, the nature, the freedom to express all our inhibitions and ourselves. This painting encompasses all the elements that characterize me: the light and the darkness, the happiness and melancholy, the strength and the fear, the hope and the resignation.

Expand on yet another coincidence and your mutual donation to the RNIB- Royal Institute of the Blind, London and their help with this exhibition?

Since I have been suffering from maculopaty (a condition which affects sigh), like David Kent (Glaucoma); we both have decided to donate to the two national associations of the Blinds in Italy and in the UK. We collaborated with both institutes to raise awareness and support their cause.

At the same time, I collaborated with YoungMi Lamine from The House of The Artists (THoTA), a charity based in London that represents and supports the Artists and the Creatives in the world. THoTA helped me a lot to promote the exhibition. Hundreds of guests from Europe came to the private viewing. 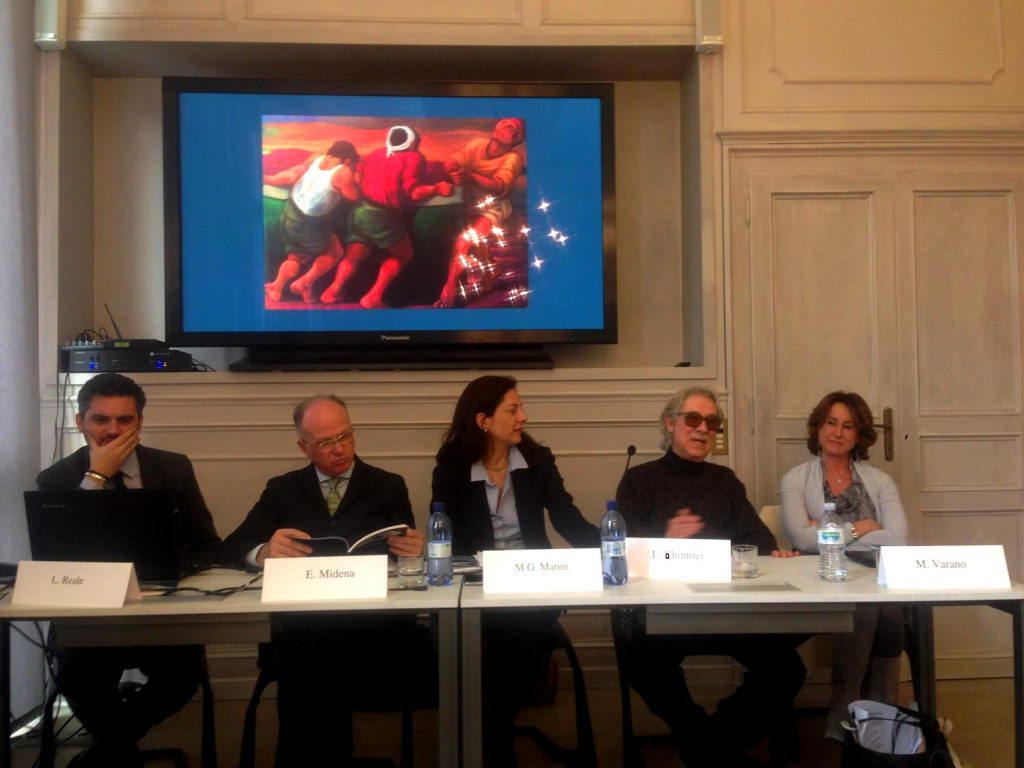 Discuss the effects of your loose of sight and the effect it is having on your work?

As a visual artist, sight is the worst sense an artist could loose. The idea to become blind is hard but hopefully I can rely on my family and my love of creating art to keep strong.

Of course, I noticed that my paintings have changed. However, I fully embrace my new style; it’s almost like the impression and the vibrations of a scenery, it became much more poetic.

Many great artists have help you develop you career.  Take one and discuss how he influenced your art?

Michelangelo Merisi, called “Caravaggio” influenced me a lot. The force expressed in his figures, the deep and profound colours have always provoked insightful emotions. I have always admired Caravaggio’s compositions; the manner he staged drama by directing our attention on specific areas: a hand, a foot or a portion of a body. He mastered the “chiaroscuro” (clair-obscur), which keeps the viewer in suspense. Caravaggio inspired me a lot; you can find the same force and contrast in my paintings.

Many artists have assisted you, how have you helped the next generation of  artists?

I had the great chance to work with established artists when I started. I know that when you have the chance to be successful, it’s really normal to share and give back to the community. Moreover, I contributed to inspire the next generation, as I was also an Art and Design lecturer. I engaged my students to know the techniques first, then visualised art through their own filter. Once equipped, I pushed them to test new hypothesis to finally discover their true self.

You capture the life of local fishermen discuss.

I grew up in Sicily. This island offers pure and un-sophisticated beauty, its light, its warmth, its vivid colours surrounded by the Mediterranean sea. When you are a keen observer of the nature and its inhabitants, you can only fall in love with it. 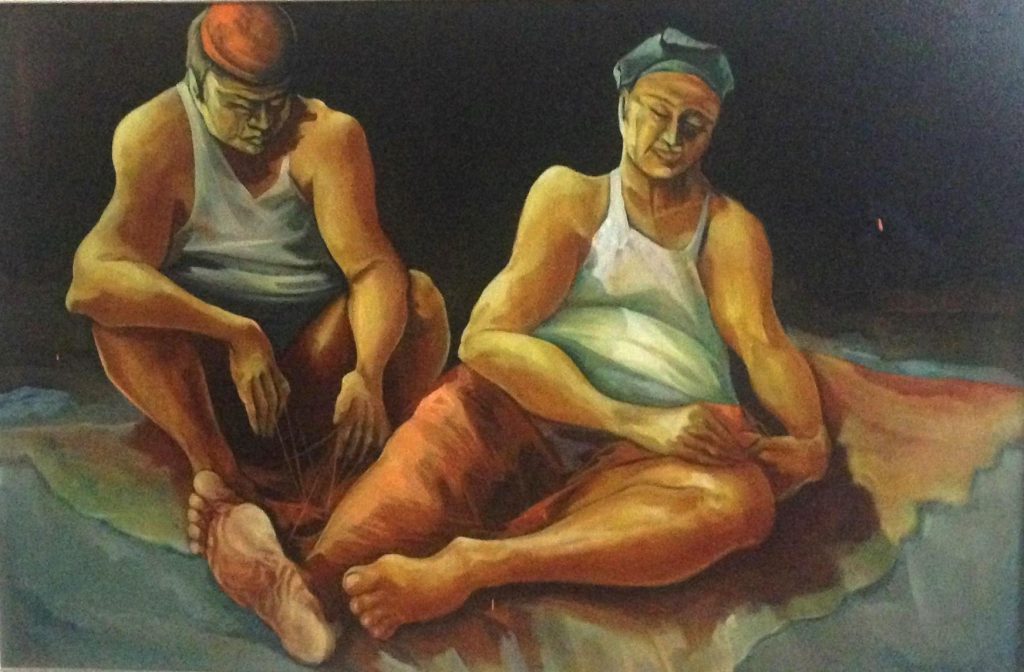 I paint Sicily with two distinctive sides of it. The landscape, which offers infinite beauty and peace, contrasts a lot the hard life of the people living there. Being a fisherman is a very hard job. They are fighting the natural elements and their works involve a lot of repetitive workmanship, which induces resignation and fatigue. The fisherman are physically strong and emotionally weak at the same time.

Your work has a biblical feel, even your modern day paintings discuss?

You are right, being a Christian; the study of the Bible had a lot of influences on my art.

I reconnect religious images from the past that interact with a more synthesized representation of my own faith.

I think that the past has had significant impact on whom we are today. I like to leave some food for thoughts and to everyone’s appreciation of the world we live in. And therefore, the figure, even in group, remains in silence and in solitude almost being afraid to face the reality.

You also do work of local women at work and children at play, discuss both?

My wife was a teacher in a kindergarten and I used to often visit her. I noticed the air of joy and the genuine happiness on all these children’s faces. This candid joy contrasts with the daily life of a Sicilian women usually filled by shores such as the preparation of the tomatoes, the olive and the grape harvest. All those snapshots relate to my memories of Sicily, its rhythm and seasons; its life. 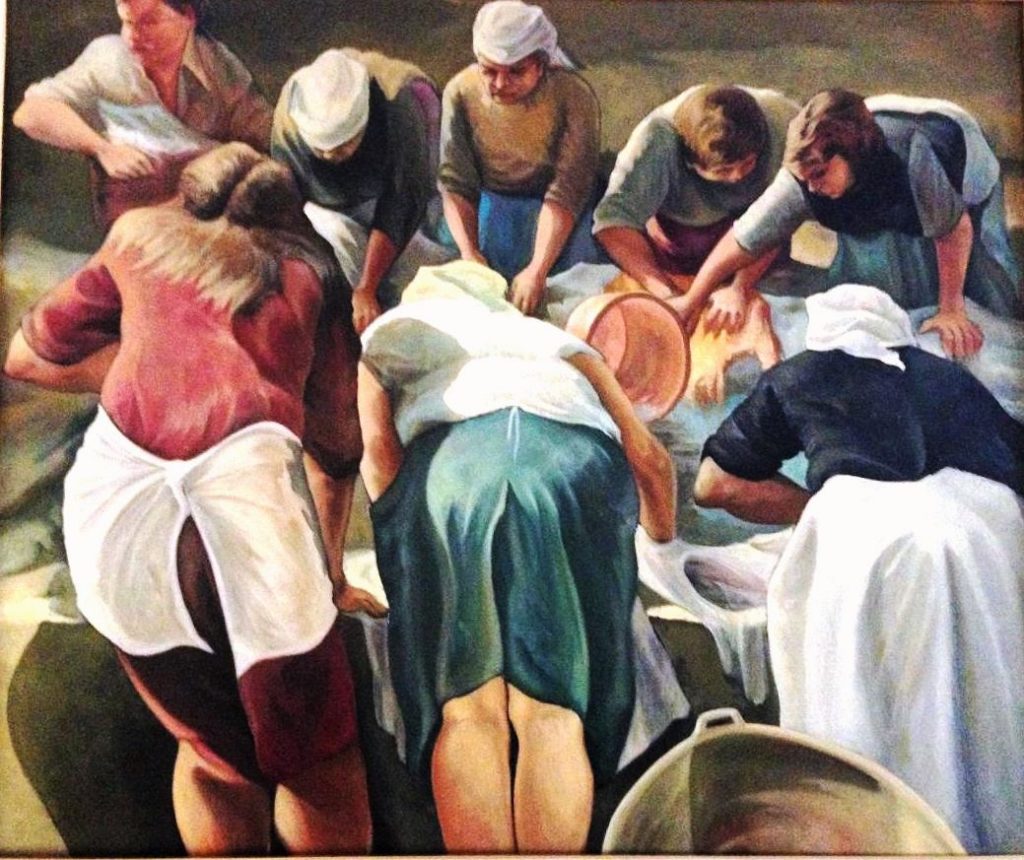 You bring the outside in through murals expand using ‘The Relatives”

I have always liked the large surface of a wall; it is big enough to portray some happiest moments of my childhood with my relatives. It is like having a family picture but larger. 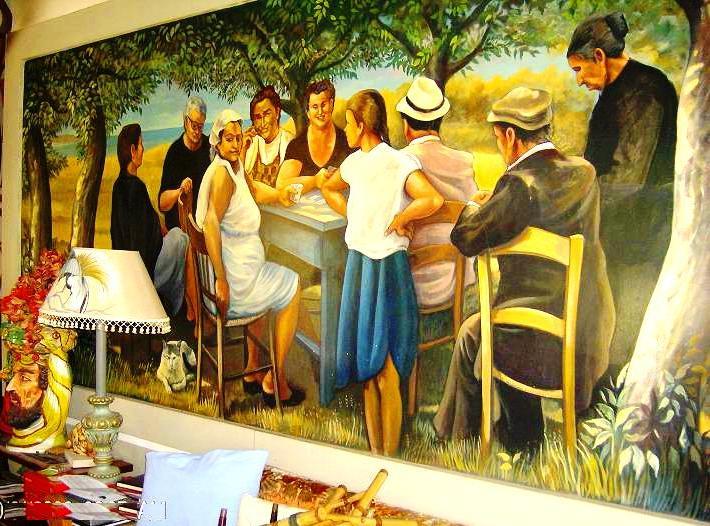 This mural is located in my villa in Sicily. As I paint from my personal experience, I wanted a personal mural in my home because it represents dear memories with my family. Every time, I recall I see it, I cherish that period of my life.

The placement of each person and the composition within the work?

In the mural, the women are predominant. It’s a typical portrait of the matriarchal Sicilian family style.

It’s a typical afternoon when we used to play cards in the garden. The family members are dressed well, that indicates that it was a Sunday after masses.

In the foreground with her arms on her hips, there is my cousin Giuseppina , my aunt Anna and aunt Nina.  The side facing the viewer find my aunt Maria. In the middle, my mother, Felicia, and her husband with the white hat, cousin Salvatore, the old woman standing on the right is my “Tindara” grandmother and the man with beret is my uncle Nino.

We think of murals in churches especially Italian Churches as work from the past.  Can you expand on the two murals you have done in Churches also about the commission? 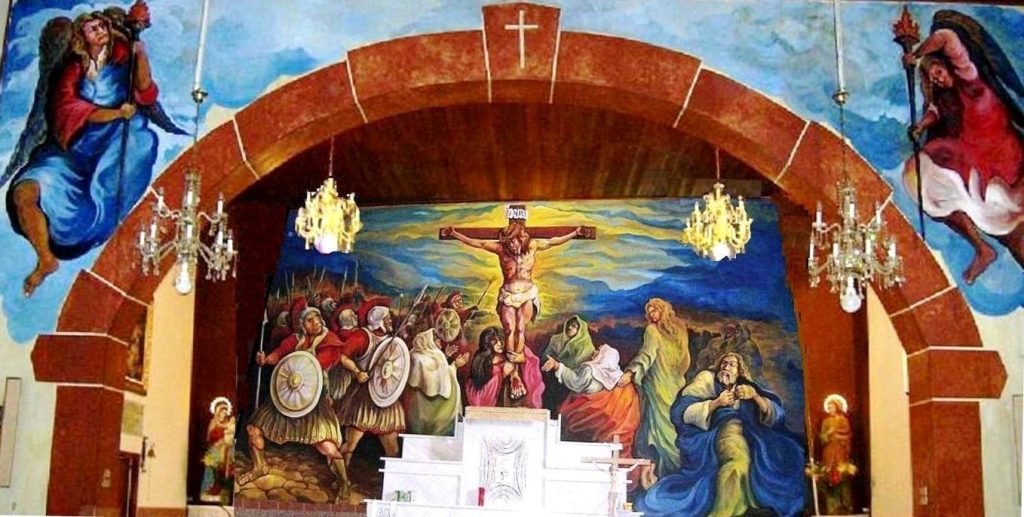 In Sicily, there is still a huge appreciation of the tradition and therefore, I was commissioned to create various murals. I presented a few sketches and the priests were confident in my abilities to paint the passion of the Christ. The murals are from two different churches but the second murals emphasise the turmoil of the Christ during the agony, and the Virgin Mary at the base of the cross. 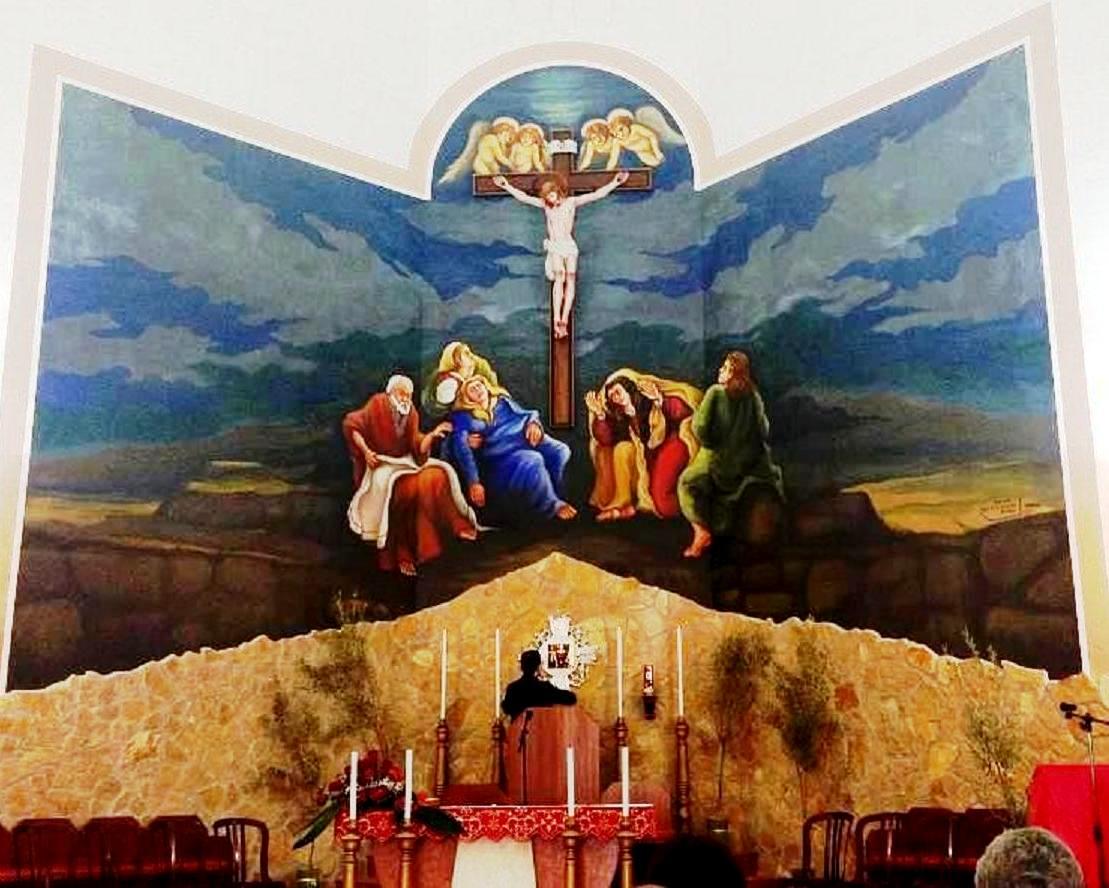 Many of your large works are done on scaffolds, explain?

Working on a large scale

Those artworks are very challenging but I like painting huge artworks. The surface to be painted is around 100 square meters with huge ceilings.

In order to reach those heights, a scaffolding structure is a must. The rigid structure is usually not facilitating the viewing of the space, so you need a scaffold that can be easily moved with different levels to see the entire ceiling.

Some of the disadvantages of this type of work?

To work on scaffolds require some agility, basic H&S security and physical strength. I used to paint for 10-12 hrs per day and my flexibility in restraint space was put to the test. One day, I tripped over and my wife, who was there, ran to cushion the fall. She was in hospital for three months and the priest waited her recovery to open the church.

On an artistic point of view, the challenge working on non-plane surface is the distortion. You have to keep the proportion of each figure by creating a geometric grid.

Expand on the importance of “Place” in your work?

The importance of “Place” is my island that I paint from personal memories. I love my country and all my paintings tell a story about Sicily. The antagonist side of Sicily comes from my childhood. When I was five years old, my dad left. And at the same time, all Europe was recovering after WWII.

Life was hard, people worked hard, people were poor but there was no other choice than surviving in this picturesque serene solitary landscape. 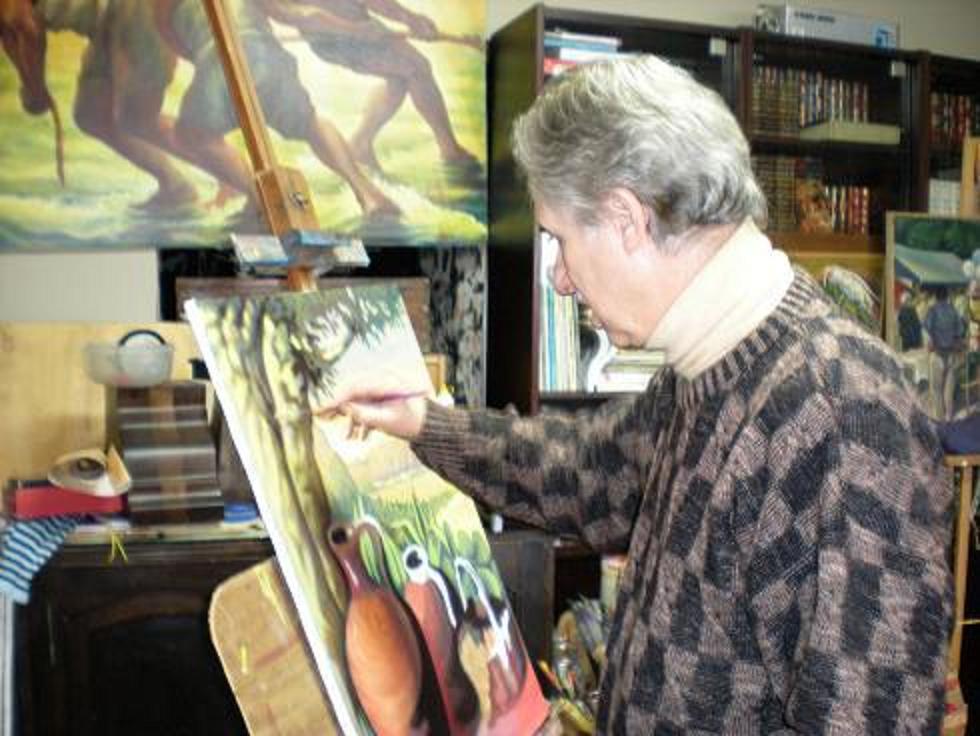