John Wheeldon sees himself primarily as a potter. It is the materials and processes that he has developed that brings his work alive. Taking a craft that was established in the Bronze Age John has spent hours and hours visiting galleries and museums to look at the historical side of ceramics. This background has lead John Wheeldon to create his own unique ceramics.

Zoneone Arts is delighted to bring John Wheeldon to you… 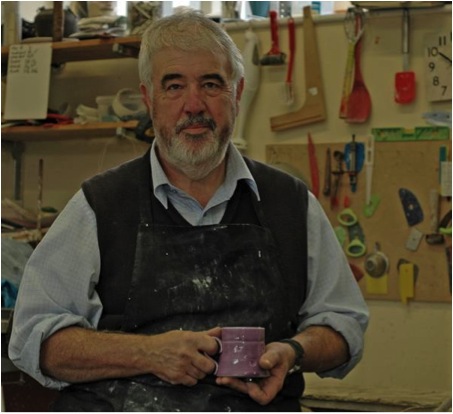 Can you expand on several aspects of your ceramic work and how you use these techniques?

During the 1980’s I had developed a way of working that involved applying precious metal lustres to both the surface of a textured black stoneware clay and to a translucent white porcelain. The lustres were applied using hand-cut rubber stamps and the designs built area by area until the piece was finished. These techniques resulted in an important body of work for me and were successful both creatively and commercially. I eventually reached a point, however, where I felt the creative development of what I was making had slowed to where it was becoming rather repetitive and needed a new direction.

I found this in Copper Matt Raku which was a very different way of working to what I had been used to. It involved real fire and smoke and an unpredictability that was appealing after many years of formal pattern making.

I had been shown the Copper Matt process by a friend who had seen it in America and I sensed that this was a new road to explore with scope for substantial development and refinement.

Many months of practice, note taking, failures and increasing successes followed and as a result I stopped making the lusterware and became a Raku potter specialising in Copper Matt pieces.

Copper Matt is essentially a Raku process using a simple glaze composed of Copper oxide with an addition of ten percent Alkaline Frit. The difficulties involved in producing it however occur in the firing.

Success relies on very close control of all the variables involved in the firing and relies on being able to repeat every time the correct formula.
I continued to make the work for several years but became aware that I again needed a new creative impetus as I had taken the Copper Matt as far as I could and I felt it was becoming repetitive.

The new idea dawned as I was conducting a workshop in Norway. One of the students was working with terra sigillata and was also aware of the work I had done with lustres in the 80’s. She asked me if lustre would work on Raku fired Terra Sig. My initial reaction was that I didn’t think so but we would give it a try. The results were encouraging, not amazing but definitely containing the seeds of a possible new investigation.

On the flight home I made plans to develop this further. I had the raku techniques, I had the forms and I had the lustre tools and materials, all I needed was Terra Sigillata.
This came by way of my friend Richard Godfrey who gave me clay samples and a formula to make Terra Sig. And so I returned to making lusterware again but this time on a Raku surface. 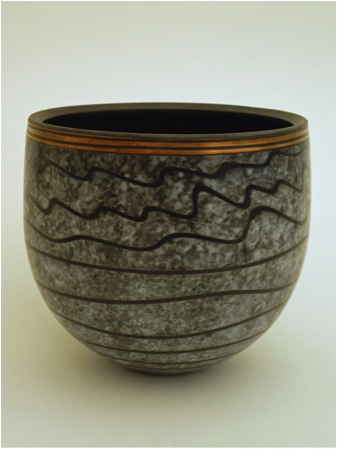 My present way of working involves throwing and turning the pots using thin steel ribs to ensure a perfectly smooth surface. I use very smooth stoneware clay which enables me to achieve this fine finish.

The lustre is then applied, as before using small rubber stamps, building up the pattern area by area until the piece is complete.

The lustre is then fired in an electric kiln to harden on the decoration.

The final part of the process involves sponging on a resist slip [similar to those used in the naked raku technique] over the lower part of the vessel using either cut and shaped foam to produce a geometric pattern or a natural sponge, usually used in conjunction with latex trailing to create lines, giving a marbled finish.

The heavy smoking modifies the colours of the lustre and creates a dense black background to the pattern which helps intensify the effect.

I do make a small quantity of what could be termed ‘standard raku’ glazed with crackle glazes and smoked with sawdust. I produce mainly tea bowls using this method and enjoy it for the freedom it gives me to throw and turn loosely as opposed to the fine surface needed for the lustred pots. 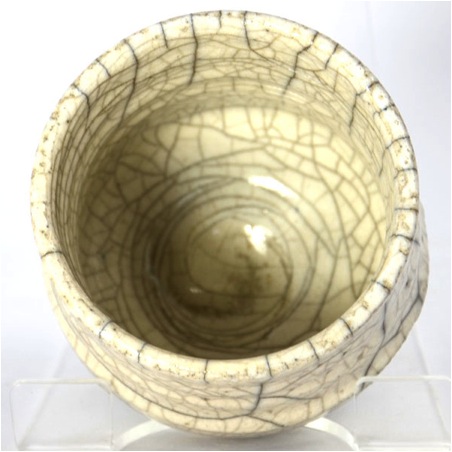 Can you expand on how you began to use pattern and how it has evolved over time?

Before I started to make the lusterware in the 1980’s I made tableware decorated using foam stamps to apply coloured glazes onto the pots and the rubber stamps I used on the lusterware evolved from these, essentially they were just much smaller and made from a different material.

The patterns themselves come from many places [most of them forgotten] but I’ve always found historic architecture, particularly English cathedrals a rich source.

In evolutionary terms the pattern has, over time changed, mainly as a result of the individual elements becoming smaller. This has resulted in a denser, richer overall surface. The colours themselves haven’t changed being composed of gold, copper, silvery blue and purple. 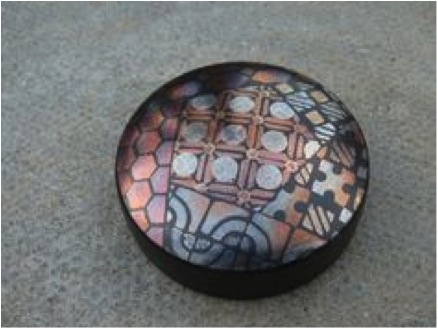 Can you discuss the gold base lustres you use?

The lustres are commercial resinate lustres from Heraeus in Germany. They are supplied ready to apply in liquid form which I allow to stiffen slightly as it makes application easier. 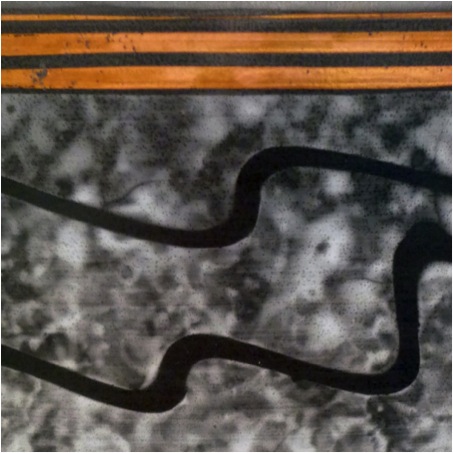 Can you expand on the importance of history to your work?

I cite history as one of my influences and it is indeed very important to me. I’m not sure however that there is an obvious link apparent in my work beyond the links with architectural details in my patterns. My signature vessel form however has its roots in Bronze Age storage jar in a local museum although it may not be apparent in its present form.

How important is traditional ware to your studios output?

Strangely, if you had asked me this 12 months ago I would have replied as it being almost nonexistent having concentrated solely on Raku for many years although I did, as I mentioned earlier, make tableware early in my career.

However, over the last year I have begun to reinvestigate tableware [if that is what you mean by traditional ware] and for about 6 months have not made Raku at all.

I decided to take time to look afresh at what I was doing and incorporate into it elements of the ceramic history I am interested in. So, I have the beginnings of a new range of work drawing on research into early 18th century Staffordshire ceramics.

I am hoping that this new work will be ready by Easter in time for next year’s shows and so far the people who have seen the early pieces have been complimentary. 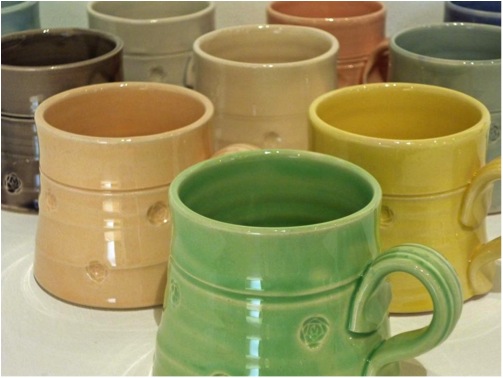 Shape is a large part of ceramic ware. Discuss one or two of your personal favourites?

The form I have used for many years, the narrow footed, rounded vessel was derived from a Bronze Age pot I saw in a Museum many years ago and has long been a special piece for me. There’s something about its generosity of form and the way it grows when it’s thrown on the wheel that appeals to me.

I’m also a fan of the large slipware dishes made by Thomas Toft and Ralph Simpson in Staffordshire during the 1600’s. Also, in the 1700’s before the full effect of industrial production there were a group of potters using predominantly hand methods but with a new found sophistication such as Wedgewood and Whieldon and I am presently finding inspiration from this source and using it in my new work.

When leather hard the slabs are joined to form a 3D object. This is the most exciting stage in the making process and results in a piece which unifies colour, form, texture and design. 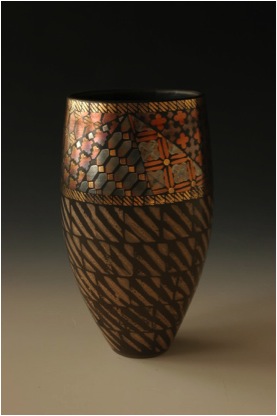 You also make boxes. Can you explain these and the technical aspects that must be taken into account in the making?

I’ve made boxes for many years. I enjoy them as they are like a small, flat ‘canvas’ ready to decorate, each one can be different and can have a variety of uses. They are a small individual piece and don’t need to be made in matching sizes. I aim to fit the lid as precisely as possible by accurate throwing and careful turning as the fit and feel of the two halves is part of their appeal. 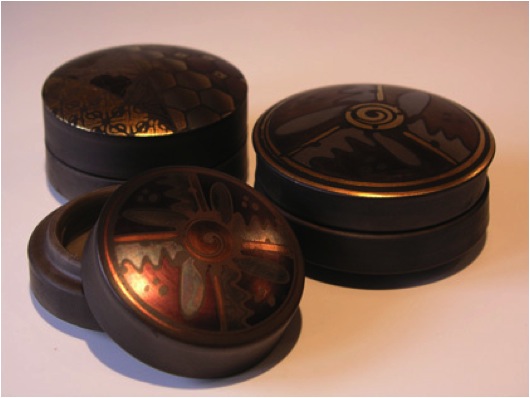 Your work has a very masculine look. Do you think this is achieved by the use of dark colours and strong pattern?

I am sure this is the case but it has never really been a conscious decision. 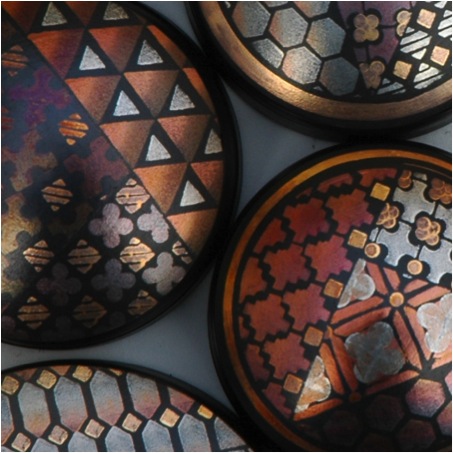 Raku courses are part of you art practice. Can you expand on the classes?

I have run the courses for several years now and continue to refine them year to year .Presently they are a two day course and cover Classic Glazed raku, Copper Matt and Techniques for Burnished surfaces. I don’t cover lustre owing to the expense involved, gold is very expensive. I provide suitable pots although students can bring their own, good coffee, tea, biscuits and a substantial lunch 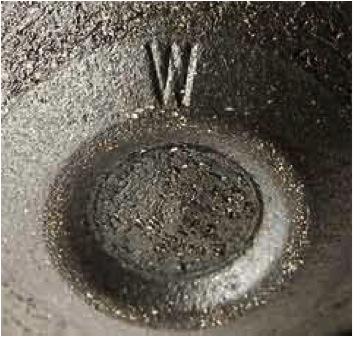 You are represented in the UK and Europe. How important is it to have good representation?

Very important! Most of my pots are sold through galleries in this country as well as several of the potters fairs both here and in Europe. As well as actual retail sales the value of networking at these events, contacts with galleries etc. and keeping up with friends is of great importance.