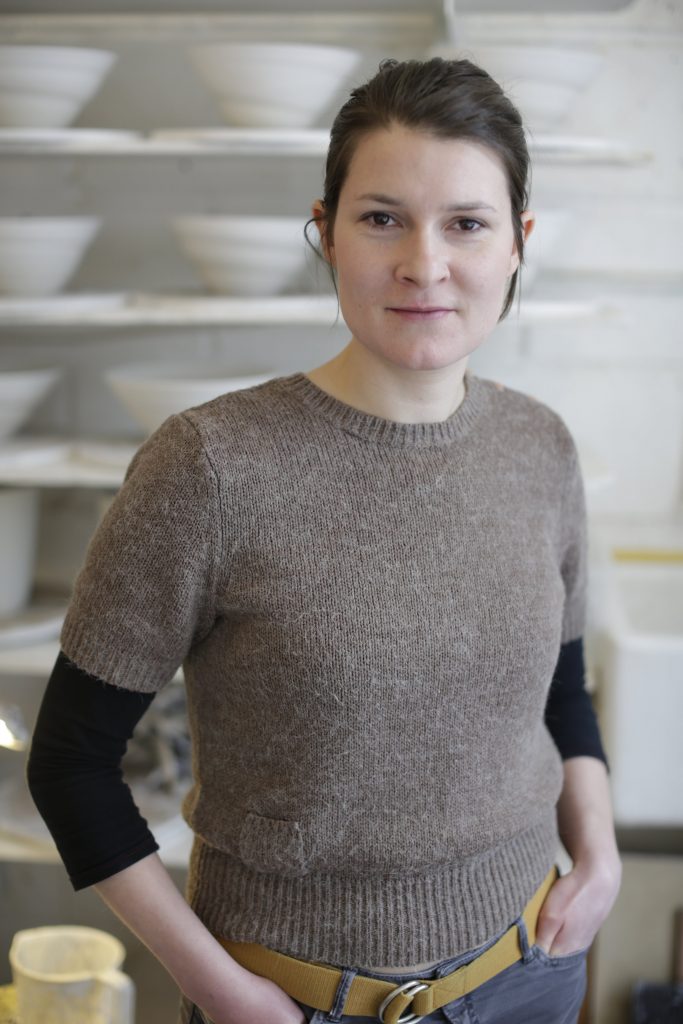 How does and English potter get a Solo exhibition in Shanghai?

Last year I spent a few weeks in China teaching at Jingdezhen Ceramics Institute and so, while I was there, I ended up meeting lots of new people who saw my work and liked what I was doing so the Mufei Gallery, which is part of a larger organisation called ‘The Pottery Workshop’, invited me to exhibit with them. 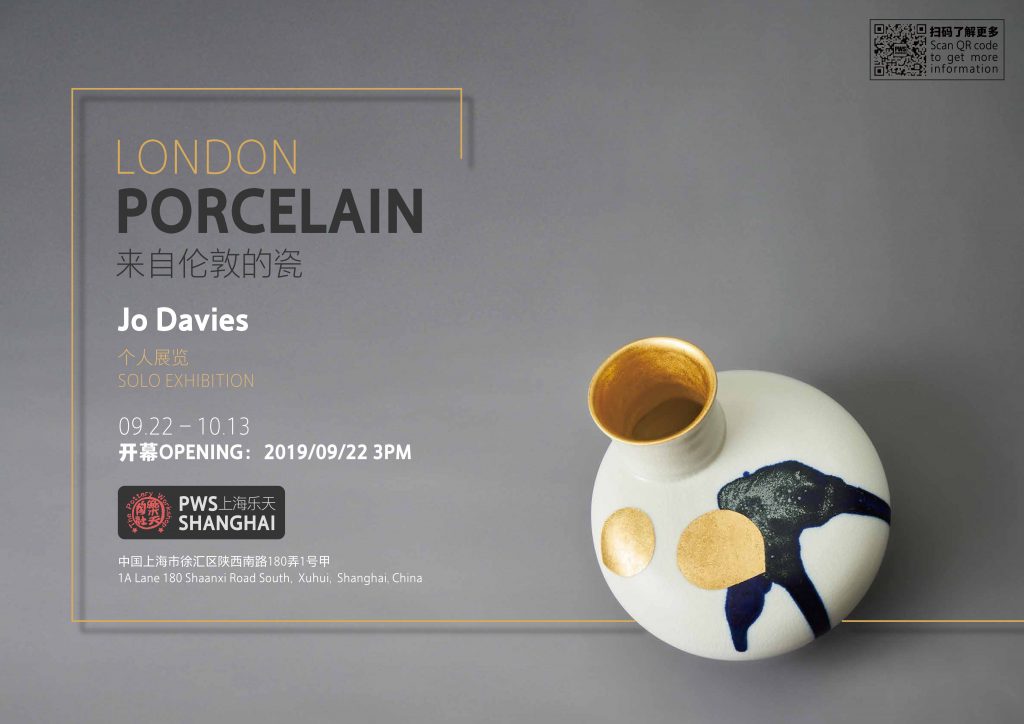 When did you first become involved artistically in China?

One of the professors at Jingdezhen Ceramics Institute asked me for some information and images about my work by email for a book she was writing on Western ceramics. I gladly gave her what she needed but then she asked if I would like to come to China to teach at JCI with all expenses paid. How could I say no? 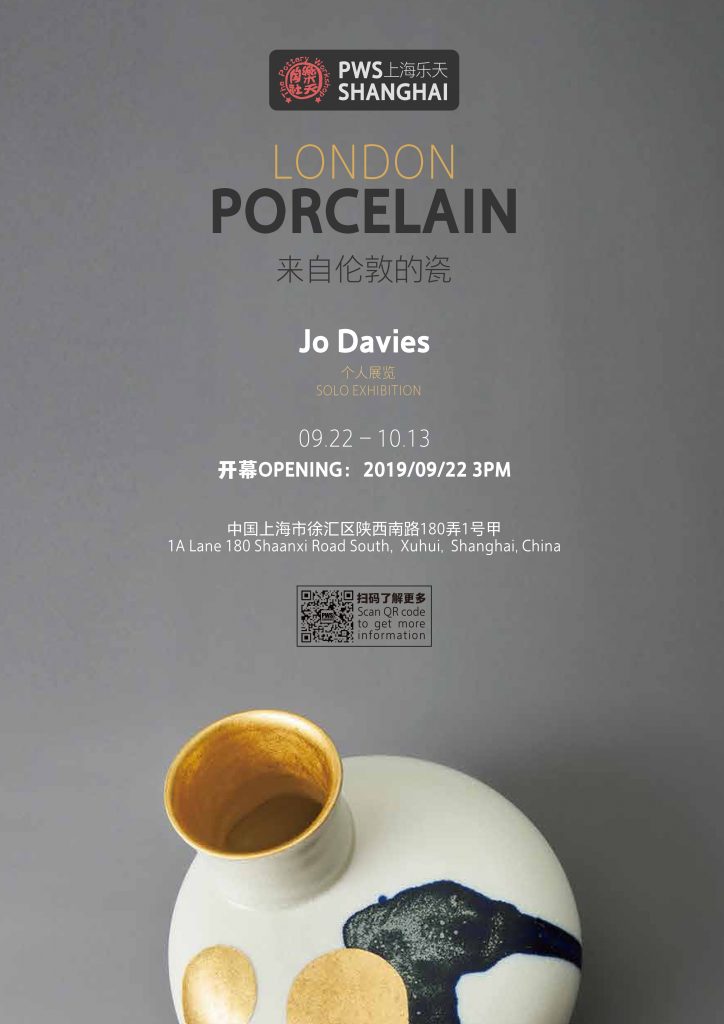 Tell us two special moments you have had (artistically)  during your time as a visiting lecturer in China?

There were many inspirational moments – both large and small – but one of the main events for me was seeing the ghost market in Jingdezhen where many antique objects are being sold. However, many of the items are shards and kiln rejects that have only recently been dug from the ground after hundreds or even a thousand years of lying in an old kiln mound – discarded at the point of emptying the kiln because those pieces were below standard. They now make for fascinating testimonies to the long, arduous process that is involved in making ceramics and people are re-evaluating them as beautiful in themselves.

In Autumn last year I was asked to teach at the Jingdezhen Ceramics Institute and so I spent 5 weeks in this historically important part of China both teaching and researching. I explored the area, meeting new friends and building on my knowledge of porcelain in its birthplace. The research I undertook simply followed my natural curiosity for my own subject, shedding a light on cultural differences in attitude towards the material, its production methods and value within both Chinese and Western cultures. During the course of this research I took tea many times. Some tea sets were more formal, some were made by the artisans I was taking tea with and took on more artist aesthetics. I feel incredibly lucky that I was able to take tea both formally and informally, many people in the West have an idea of tea as being an entirely formal ritual without freedom for change but I saw that the objects encompassing a single set could be complementary rather than slavishly similar. I felt this was an important lesson that my experience in China taught me: the nature of a set of objects could cleverly hold the meaning of its function without having the same motif across every object. They can hold as much beauty and still be considered a set of objects without being the same colour even. This is very different to the way we are taught design in the UK – after Wedgwood and the Staffordshire tradition. 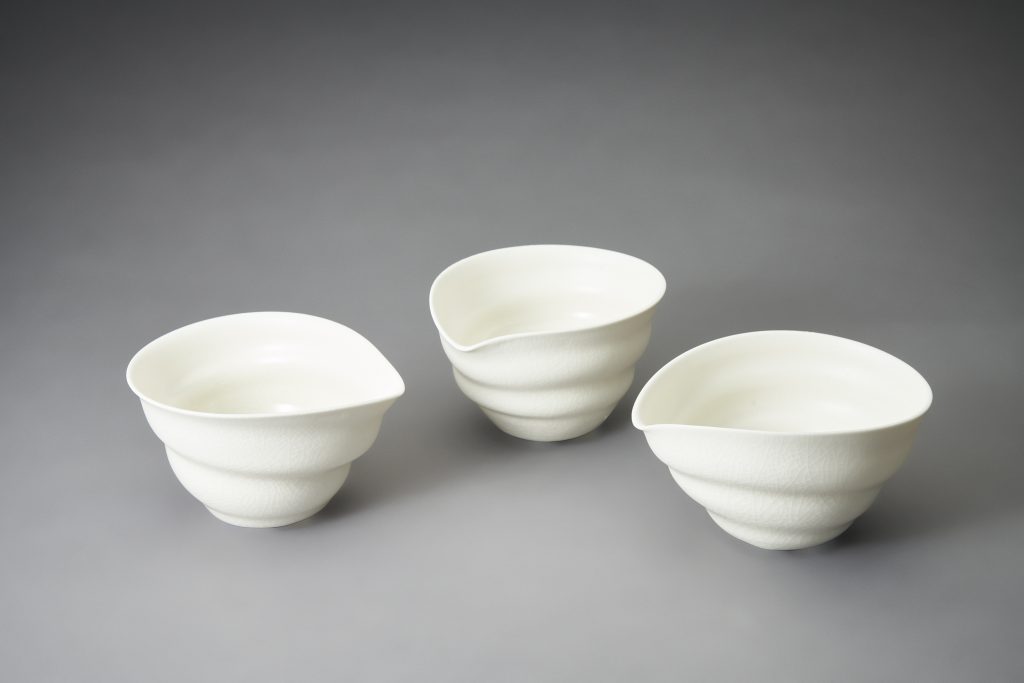 In seeing all these tea sets, from formal meetings to home studios, and observing the splashing, water-spilling nature of the ritual I gained a real insight into what was and what wasn’t important in tea-drinking in China. However, I have my own, British idea of this too and so the bringing together of my aesthetic with the Chinese Tea Set has been an enjoyable development and one that I hope will be accepted by a Chinese audience. My hope is to bring together these two worlds while making the set ostensibly a Chinese one designed for loose leaf tea that values small, exquisite sips of tea.

How has your Chinese Tea Set married East and West?

In China I noticed that tea was being served in a way that was both casual and formal. Beautiful tea sets were being used but water was being spilled liberally. As a British ceramicist the spilling of water from a spout, for instance, is considered a failure of design but in China this aspect was incorporated into the nature of the ceremony – a cloth is always present or there are perforations in the tabletop. This is why I created a tray with a pouring lip so that, much like the saucer of the English teacup, the water can be contained and poured away easily.

Discuss why the tray is so important in China.

The tray is not necessarily something that is used by the Chinese, it’s my addition to the tea set, a nod to Western preferences that include tea trays and saucers. Although there are often larger, more bowl-like containers and wooden slatted ‘table-trays’ included in Chinese Tea Sets, these are not quite like the tray I have introduced. 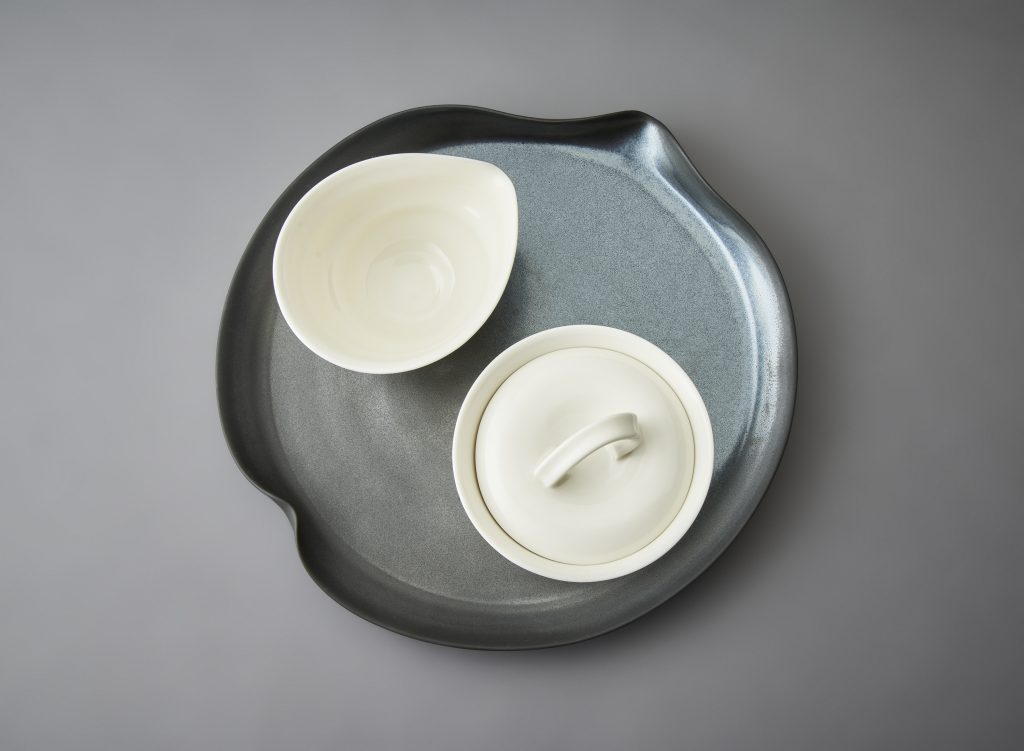 The tray doesn’t have an intentionally lotus shape, this is purely coincidental… a happy coincidence, given the lotus’ significance in Chinese culture !

Explain how you have reciprocated in the world of ceramics by being a visiting lecturer at the Ceramics Institute in Jingdezhen?

The teaching at the Ceramics Institute was a real leap of faith on my part. I knew very little about exactly what I would be doing with my students but, as it turned out, I was working with 4th year Design students and some Masters students. They were very unused to Western methods of teaching – where much emphasis is placed on individual creativity and investigation – and I was unfamiliar with their educational backgrounds, which were mostly based on learning by recreating the work of previous generations. Both systems have their benefits and disadvantages but it did mean we had some teething problems at the beginning. Many of the students slowly understood what I was looking for from them but there was definitely more than just the language barrier to cross! I learnt a lot from them too.

You trained at the Royal College of Art, London.  At the time named ‘one to watch’.  Do you think they anticipated a Solo exhibition in Shanghai the home of China?

I’m not sure anyone did…To be honest, I’m not sure what anyone anticipated, I certainly didn’t see this happening back in 2007 but I’m glad it is. 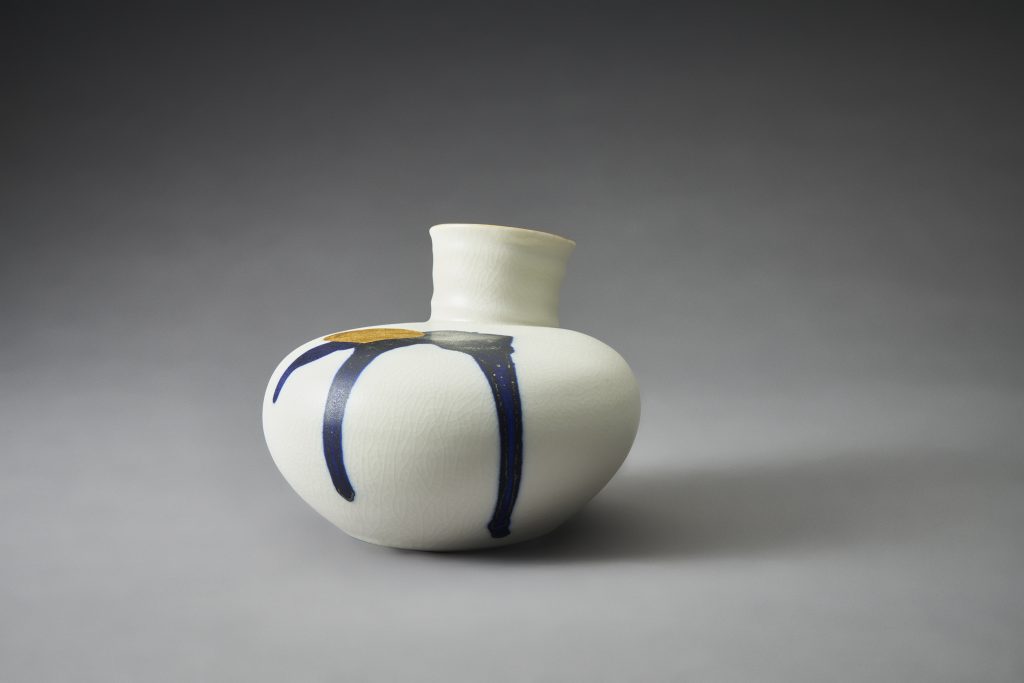 While using cobalt to create blue is nothing new for a ceramicist, seeing its use in China revolutionised how I felt about the material. It was no longer the stayed hallmark of some Staffordshire ceramics but more of a living material that could be used freely. I gained a visceral sense of the material that displayed an individual craftspersons skill with beauty in every mark. I was drawn to the marks, particularly the Ming Dynasty shards which were ubiquitous in Jingdezhen, not just in museums but available to buy in their thousands at markets. Each shard was a detail of a larger image, an abstracted fragment that forces us to imagine their original state. In the new blue and white surface designs I wanted to capture some of that materiality of cobalt and create a surface that may or may not be a literal image.

Discuss the importance of Gold in modern China

I’m afraid this is something I’m not certain of, but my understanding is that gold has a history at least as old as porcelain in China, is often given as a gift as it is held to bring good fortune. 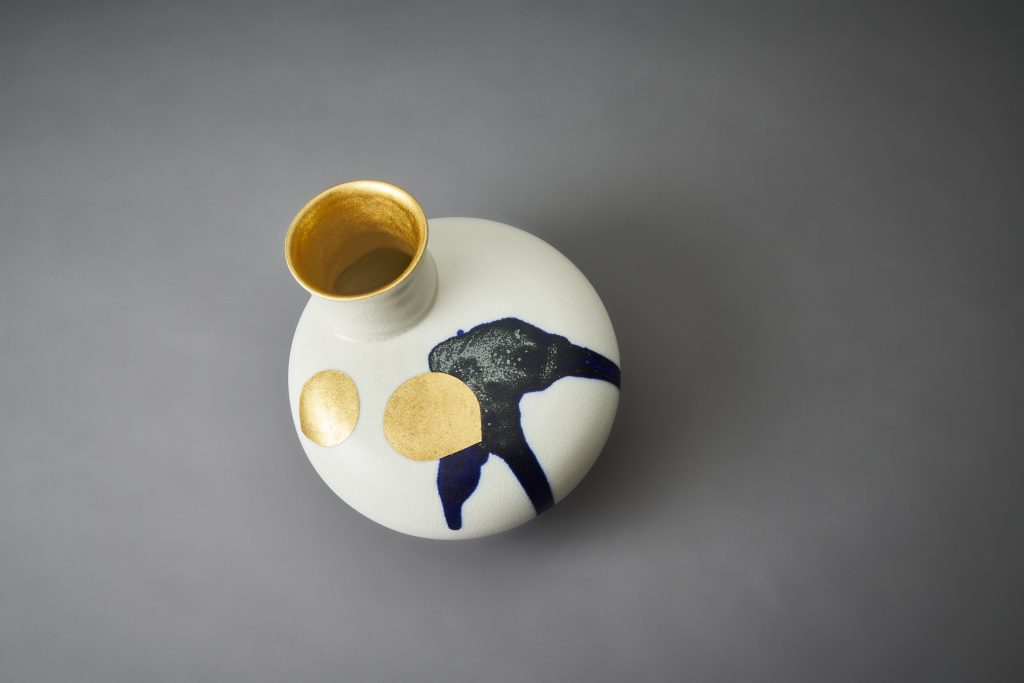 CLICK HERE TO >>READ INTERVIEW OF JO DAVIES FROM NOVEMBER 2015