Jane Annois, lives in the bushland of outer Melbourne and comes with many talents. She has been a ceramic artist for over 25 years teaching at all levels. Since 2001, Jane has been running Marche de Potiers [Potters Markets] just like the ones in France here in Melbourne.

Jane spends large amounts of time between Australia and France where she shares her local knowledge of France, the culture, people and artists with guided tours each year.

Zoneone Arts is delighted to bring her thoughts to you... 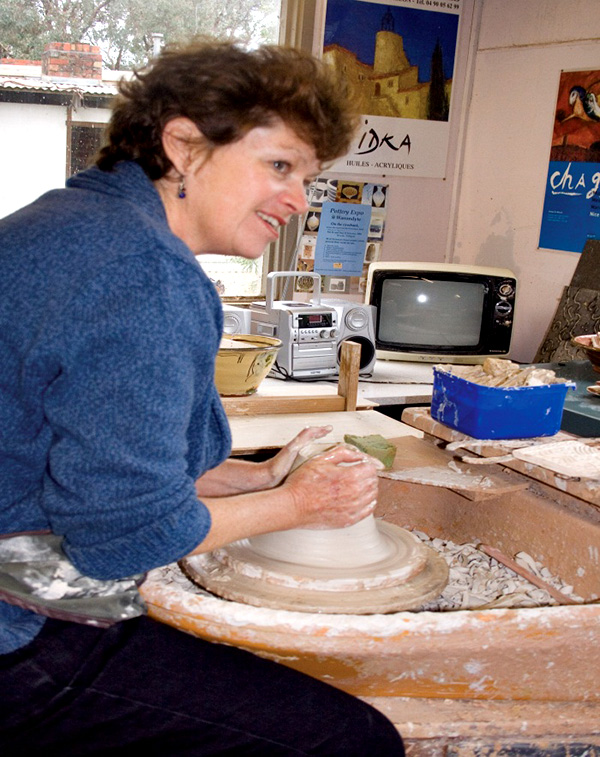 How would you describe your own pottery style?

I work in two styles: in raku, originally a Japanese firing technique but adapted to modern equipment and desired results. These pieces are more sculptural or decorative where I explore surface textures, contrast of colour and play with form.

The second style is “terre vernissee”, French tableware using traditional honey, green and blue glazes. These pieces are intended for everyday use and reflect the colours and style of the south of France.

What art qualifications do you have? How did you decide to become a potter?

The qualifications came after the decision to become a potter. I was always interested in pottery, making things with my hands, the practical and creative nature of pottery, and subsequently the history, cultural differences and the science behind pottery. I was already working as a potter when I decided that if I wanted to pursue it further professionally, and learn more about the processes, I needed a qualification.

I studied for a Graduate Diploma in Ceramic Design at Monash University in 1988/89. With ceramics I never stop learning. I attend workshops by my favourite artists, attend conferences and have learnt a lot from my involvement and work with the French ceramic artists.

Explain about your time in France where you learnt you craft?

I went to France in 1997 to work in a pottery studio and visit other ceramic artists. I was a French teacher in secondary schools in Melbourne, then taught English as a Second Language part time and worked as a potter part time. I went to France to use and improve my French and discover the French ceramics scene.

I spent a month working in a studio with artist Sylvie Deverchere in Bourgogne, throwing, decorating and learning how it works in France. I was able to meet many ceramic artists not only in Bourgogne, but also at La Borne, a ceramics centre in the middle of France, in Provence and the Rhone Alpes. I assisted at several ‘marches de potiers’ where I was inspired to begin a similar event in Melbourne. Since forming these friendships I have returned annually to France, to visit the potters, participate in the marche de potiers and eventually exhibit in galleries in France. 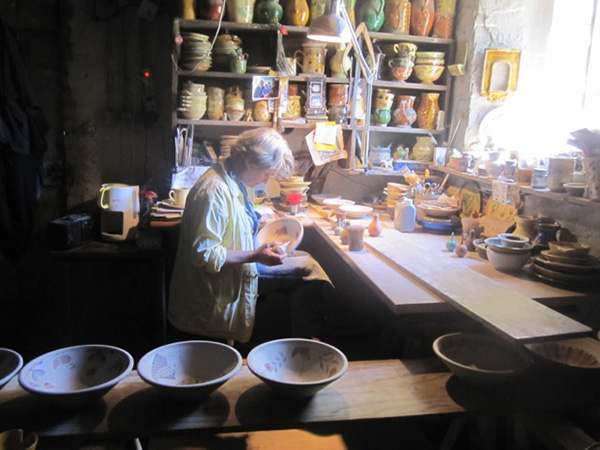 Is there an artist who has influenced you?

There are several artists who have influenced me. In the raku technique and style it would be South Australian artist Jeff Mincham who pushed the boundaries with raku, creating large forms with intriguing textures. The other raku artist is Frank Boyden from USA, who introduced me to the technique of terra sigillata in raku, which instantly struck a chord and I have been pursuing it ever since. Jeff Mincham also said to me once, that ceramics enabled him to travel the world, sharing his knowledge, meeting some wonderful people and sharing his common interest. This has also inspired me and I have been fortunate to have had similar experiences.

With terre vernissee, my French friends Yves Gaget and Jean Jacques Dubernard from the Rhone Alpes ,have influenced and taught me a lot about the techniques. Jean Nicolas Gerard has inspired me in his freedom and strength of his work.

Explain how your knowledge of French culture, and the people has developed into tours of France where you network with French artists? Tell of several special moments that you have had during one of your tours?

I have always been a Francophile, majoring in French at University, spending a year in France before beginning a career as a French teacher.

I began taking Australian ceramic artists to France to visit ceramics studios, potters markets, and rural areas. This has taken off as the beginnings of a cultural exchange, which continues strongly today. 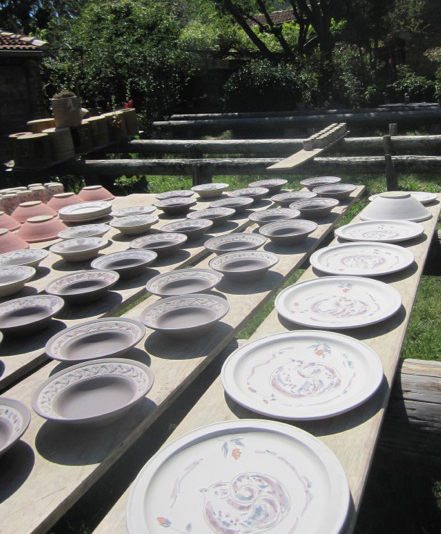 Pots drying in the sun at Cliousclat

Having participated in many French potters markets in the years leading up to the tours, I had met potters from all over France, and visited some of the most spectacular parts of France. During these markets, I stayed at the local potters homes, shared meals and enjoyed their company. The tours allow me revisit and maintain the contacts with all these people, introduce them to the Australians and vice versa.

The tours are quite personal where we are welcomed into artists’ homes. 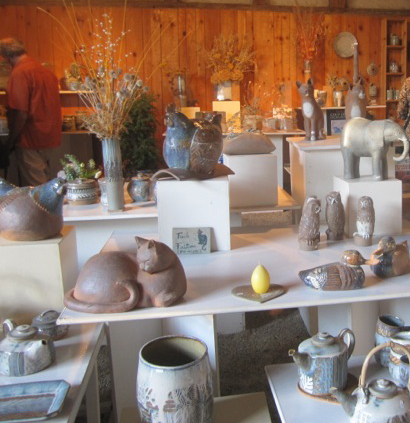 Visiting the pottery studio and showroom of Jean and Catherine Mercion

Each time I go to France, I take time to visit new areas, take part in new events, and explore further options.

Many who have come with me, wished to return again but visit different regions of France

I have diversified to run tours with a music focus, going to the wonderful summer music festivals in France, particularly Jazz at Vienne; wine– visiting the Beaujolais, Bourgogne and Alsace regions; art– taking a professional artist as tutor, a mix of exploring the background of various French artists/museums/galleries and hands on painting and drawing, in Provence, the Dordogne, the Loire Valley and in Brittany [4 tours]; a gourmet tour with a French chef, gardens etc. However all the tours enjoy local cuisine and wines, artists, rural villages. I now have some people returning for their fourth tour. 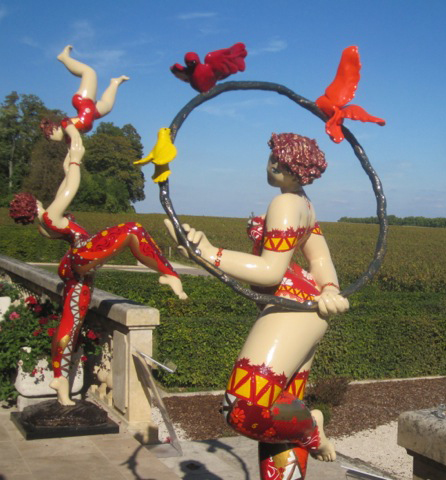 As the tours are small, [max 8 people] we are able to be spontaneous, and take advantage of local events and surprises.

During the recent fete de la musique, the evening of the summer solstice where there are free music performances in the streets all over France, Jacques Long, husband of ceramic sculptor Brigitte Long, played guitar and sang the blues with fellow singer Elisa and band. I then asked Jacques and Elisa if they would perform for our Australian group. The special moment was our wonderful evening at Brigitte and Jacques’ house, a private performance, we all brought food and wine, just loved the music, all joining in at the end. 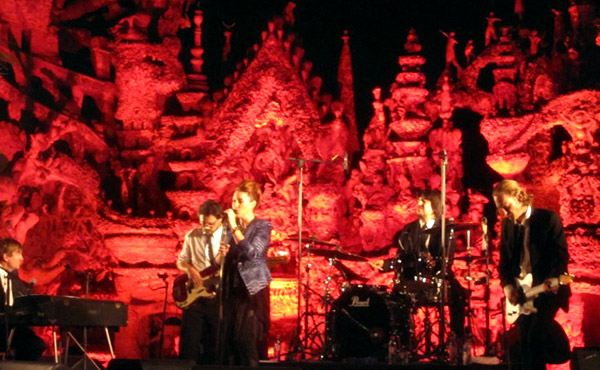 Another special moment happened when we visited Montelimar, initially for its nougat, but then discovered the museum of contemporary art. One of our group was admiring a painting when the artist passed and struck up a conversation. He invited us to his solo exhibition in the countryside. After a few twists and turns, we came upon a Roman aqueduct carrying water to what was once a silk factory, of which there were many in the area during the 17th and 18th centuries.  This ancient building, remarkable for its architecture, housed his exhibition and that of another sculptor. Again a privileged experience, in an extraordinary environment.

Explain some of the similarities and differences between pottery in France and Australia.

We are all individual artists, each working in our own studio. The French say that we are free from the history and tradition, which can underpin and influence their work, that we are not restricted in any way. However the French artists may be informed by their history in their initial studies, but generally use the medium of ceramics to express themselves freely. As Australians we still look towards Europe and Asia for inspiration from ceramic history, and often follow similar trends and styles. Many regions of France do have distinctive styles derived from local clay deposits, traditions in kiln firing etc, but contemporary ceramic artists both French and Australian have moved beyond regional specifics to reflect concepts rather than location.

The main difference between the two countries is that the French are professional potters. They do not have a second job. Their sole income is from ceramics. Most have a “salle d’expo” or gallery showroom attached to their studio. Their sales come from the potters markets, galleries and their home gallery. In Australia there are very few who can make a living from ceramics alone. Most have a second job – often teaching.

Having said that the French are finding it much harder since the economic crisis, and may be forced into restructuring their work life. 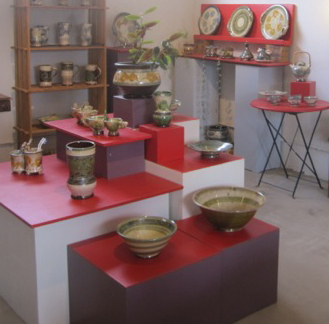 Explain about the pottery expo, how it came about and how we can become involved?

The French could not believe that we did not have a potters market in Australia. It is an essential part of being a potter in France. It is a showcase for not only the public but for galleries and commissions. It is an opportunity for networking and socializing for a solitary occupation.

It provides a major percentage of a potter’s income. Work is selected and must be of the highest standard. Therefore it raises the quality each time, as it is difficult to be accepted. It is like the Olympics of the pottery world. 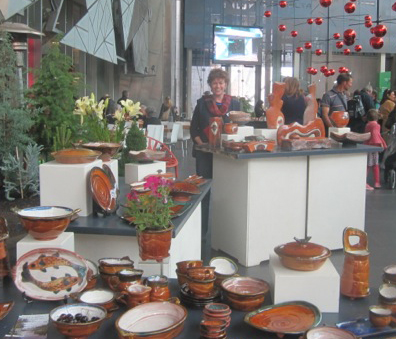 Yves Gaget and Jean Marc Plantier came to Australia in 2001 to help me get the first Pottery Expo off the ground. While in France I learnt the do’s and don’ts of the market. First it must be a Pottery Only event.  High quality, exhibition standard. Beautiful natural setting where the public will come, free entry.  Educational component. Clay hands on activities.  Food. And so on …….

Also your favourite galleries in Melbourne and a gallery/ies in France that you recommend?

In Melbourne, I explore Fitzroy and Collingwood galleries. Potier in South Melbourne, Lighfactory in Eltham.

In Paris Galerie Helene Poree near Odeon and La Celestine in rue St Paul, le Marais, Nadia B in Dieulefit in the Drome.

What does success mean to you?

Being able to live my desired lifestyle; to be able to share the best of France with others, and introduce new experiences; To make a difference. It is a thrill when people say that the trips have changed their lives.

I feel successful if I can spend summer in France doing all the things that I love and then summer in Australia. In between trips I can work in my ceramic studio and prepare the Pottery Expos.

My signature Zoneone Arts, question – what are the most important design elements? Please answer this question.

Harmony of surface and form. The contrast of texture and smoothness. Tactility. In a functional piece, it would be functionality and form. Simplicity, harmony of decoration/glaze with form. Balance.

How do you see your art evolving?

I am currently working collaboratively with two artists, I see my work as becoming more sculptural, preparing the surface for line drawings, developing textural surfaces.

The other style “Terre Vernissee” I would like to develop more in France, working alongside some of the French ceramic artists in this field. Ideally I would like to immerse myself for a few months and allow myself to experiment with techniques I have learnt. Who knows? 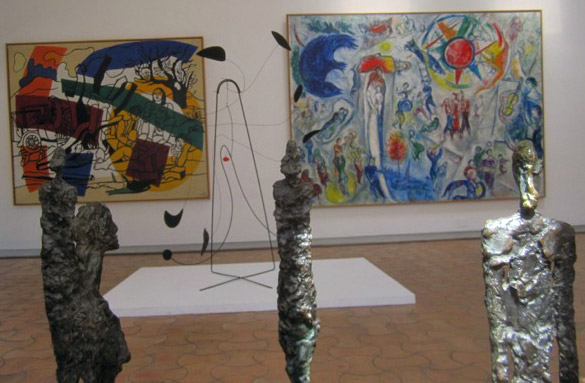