Graham Dean from Brighton, UK has spent the past two and a half years preparing for this timely exhibition of watercolours on handmade Indian paper. The exhibition “Fitter, Quicker and Longer” for the Olympic Games in Bath and London.

Graham has visited Olympic and Paralympic training camps, making many studies of athletes. They are more that images of athletes, in action but show the emotions of the events.

Zoneone Arts is delighted to bring his thoughts to you. 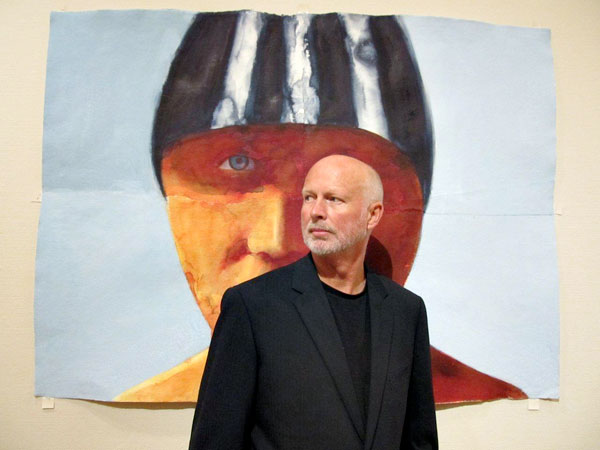 Where did the initial idea for this exhibition come from?

Jon Bennington contacted me to see if I was interested in putting on a solo show around an Olympian theme. That was two and a half years ago – Waterhouse and Dodd came on board a bit later. I was due another solo show with them so it seemed a good idea to combine the two and have it around the time of the Olympics. A summer show is a strange one for me, it’s usually the ‘downtime’ but I guess this year is different.

Can you explain about the exact wording for the title for this exhibition; ‘Fitter, Quicker, & Longer’? 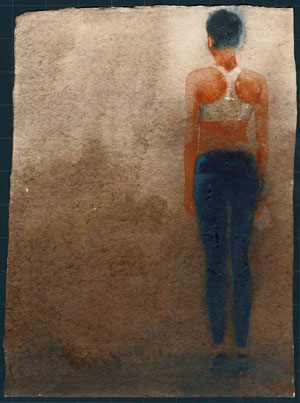 Hum…… the titIe was a bone of contention. I had the original title in my head as soon as I started the works and that was ‘Faster, Higher, Stronger’ – the Olympic motto. It was only a few months ago that we found out that LOCOG, the official Olympic body, had secured rights to a long list of Olympian words –‘gold, silver, bronze, the games, Olympic etc etc. This included the motto. They were quite assertive in threatening anyone who used these words and I really couldn’t risk a libel action against the gallery or the Museum .So I invented a phrase like it –‘Fitter, Quicker, Longer’, it has a slight tongue in cheek quality to it and some people have said it sounds like a condom advert. This is very ironic if you knew the stories behind condom use at Olympic Games. In Beijing, 400,000 were given out to athletes in the village and each one has ‘Faster, Higher, Stronger’ printed on them!

How do you feel about preparing for and exhibition that needs to work in two sites?

Working for two different exhibitions for two different sites was quite a daunting task and it was also two and a half years on the same topic. A feat of endurance you might say. I think there is somewhere in the range of 90 paintings to choose from for these two shows. Not too sure if I would do it again but it has been enjoyable and the exhibition in Bath allows me to play around with groupings of paintings – more like an installation – as it’s such a big space.

Two and half years is a huge commitment, tell us about some of the highlights?

I really didn’t know how to get into this exhibition. I discussed many ideas with Jon ranging from flags, to a show dedicated only to Jessica Ennis. This all seems odd looking back, as I don’t as a rule do portraits and I wasn’t interested in a celebrity type show but I was having trouble. I was unsure that I made the right decision in taking up the invitation. Then one day when I was researching and looking around for ideas, I read about an American art critic who wrote to say that ‘he had never seen a good painting on the theme of sport hanging in a museum ‘. If I need a spur then that was it.

You have been to so many trials and meets how did you record this? 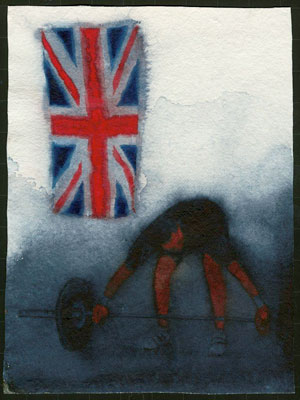 I travelled to many places over the two and a half years – Weight lifting in a sparse hall in South Croydon with a Union Jack pinned up (looked like a film set). I came in the wrong door and found myself ‘backstage’ in their warming up area. That was interesting in itself. Other venues were weightlifting along the South coast, athletics in Birmingham, sea swimmers in Brighton and Paralympians in London.

I also went to the Oxford/Cambridge boat race; this was the first time of being put into the photographer’s pit which was a bit of a scrum. I started looking one way, taking photos making notes, doing drawings and the bank of photographers all with mega lenses were pointing the other way. This was to be the pattern for the next couple of years. In the end I stopped liking this and decided to attend smaller events – with the same athletes – where I could get very close to them and I was left alone to do what I wanted. This is the only way I can work really. There is a strong streak of the maverick in me that has been there all my life. 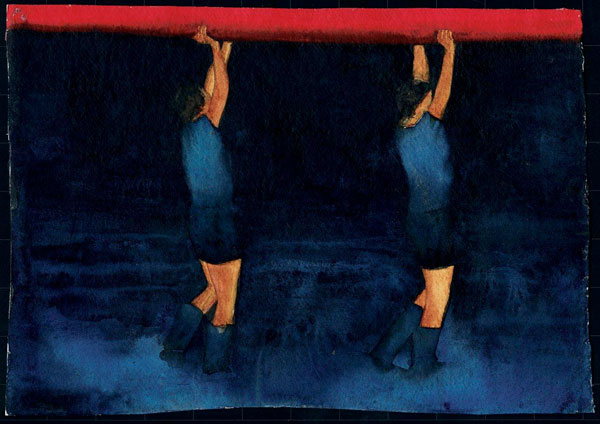 How many sketch books and albums did you make up for this exhibition?

I work in a variety of ways but always from life. That is important to me; I like to hear my model breathing. I then draw, make notes and take photos. All these elements are important and people may be surprised by the amount of words that use – possible titles or springing off points for ideas. These exhibitions are a slight diversion for me and I have adopted a more ‘recordist’ approach then I normally do. In fact I don’t tend to record at all, most of my paintings end up being invented, they just take many paths and diversions on route. I still ask myself every time I paint if the painting has a ‘feel’ to it. A simple phrase but I know of no other way to describe such an abstract concept. I should say that my working method is; I’m told quite unique. I overlap several sheets of handmade paper when drawing up the image. I then paint each sheet separately so the studio looks like an odd collection of hands, arms, legs, torsos, heads etc. Then I ‘jig-saw’ the work together overlapping the sheets and ripping and tearing the composition into place This gives me the opportunity to stretch or contract the final image until it looks right.

How many works are at the exhibition?

There are about 90 works in total which we choose from. The two shows comprise of about 75-80 paintings. I can’t say as yet as we haven’t hung London.

Can you discuss the size of the works and how you made the decision on the sizes you would exhibit? How involved have the curators been?

I always start small though I don’t call them studies – they are small finished works in their own right, in fact sometimes if I feel that I have said everything that needs to be said in the small work then I won’t do the big one. The large works are all between 6 and 8 feet in height. For watercolours they are monsters, and people often don’t believe me when I tell them the medium. I did set out 20 odd years ago to ‘re-invent’ watercolour on a large scale and remove it from the world of the leisure painter and flowers and landscapes. What I’m doing is far more contemporary and has a relationship more towards artists like Peter Doig , Marlene Dumas , Tony Bevan , Hughie O’donaghue etc etc. The curators have played only a small part in the selection of things – after 38 years I have a good understanding of which works fit together for a show and I like a certain degree of control! 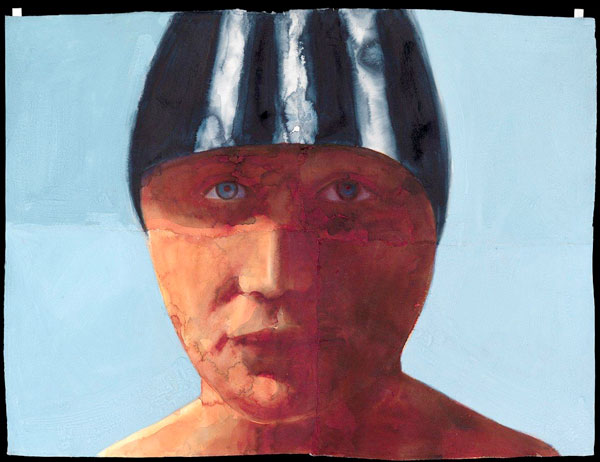 Colour must be a vital part of this work. I know that here in Australia our eye is honed to spot the green and gold. Are all your athletes British?

Colour is vital but I feel your question might be too literal. I could write a whole chapter on how colour has influenced my work but for these shows I visited the huge sorts of emporiums that are now in the malls of the world. Many years ago sports clothing came in white. It’s now a multi-colour selection of day glow colours and I set out to use some of these colours in the work. The paintings have been described as colourful which slightly surprises me as people should really visit an athletics meeting and see the bright array of colours from sports kits to sponsors signs. It’s a corporative world and I wanted to use some of that. I think the athletes came from all over the world; I didn’t make a note of who they were or where they were from. This was irrelevant to me as I didn’t want a personality themed show. 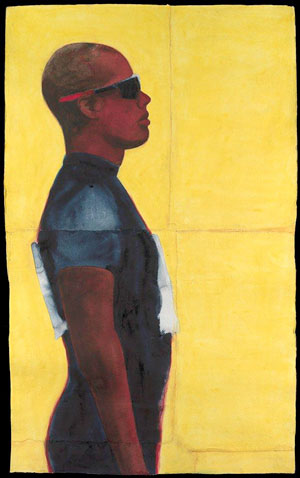 As an artist to be so involved in sport, especially at Olympic standard, can you explain how you approached the physical form?

The athletes themselves were a source of physical fascination. Firstly, the skin was amazing on many of the women. Jessica Ennis for example looks like bronze – most had incredible glowing healthy skin, the best I had ever seen. Then I came across short, compact, stout, taut weightlifters and wrestlers. Large backed swimmers and flat chested female runners. In fact I was surprised how lean and small in stature that the athletes especially runners were. The television paints a different picture as it often does with peoples bodies. It seems to like smaller people of finer features as does photography.

“I said..I was in the the last lap of making these works or I can see the finish line” Graham Dean. How do you now feel at the end of all this work?

There was an audible sense of relief at finishing this series. I can’t wait to get back to my other work and try out some new ideas with a model and see what come out of it. But first I’m spending a while at my other house in Italy with friends to energize myself again.

On a more personal note, are you going to any events at the London Olympic games?

You will find my answer to your last question amusing – I’m actually booked on a plane out of London on the day the Games start. I may watch some of it on my i pad but I’ve worked with these people for a long time and now I want a break! I’m keen though to see the opening ceremony and to see what Danny Boyle has done with it. He has accepted such a difficult job and hats off to him if he pulls it off.