Ed Miliano, Currently in Tokyo, JapanEd Miliano, has been painting for decades, he has taken his formal training and takes his art beyond painting. By adding light, colour, seasons and place, Ed Miliano draws us to understand and see beyond the known to the beautiful.Zoneone Arts is delighted to bring Ed Miliano to you… 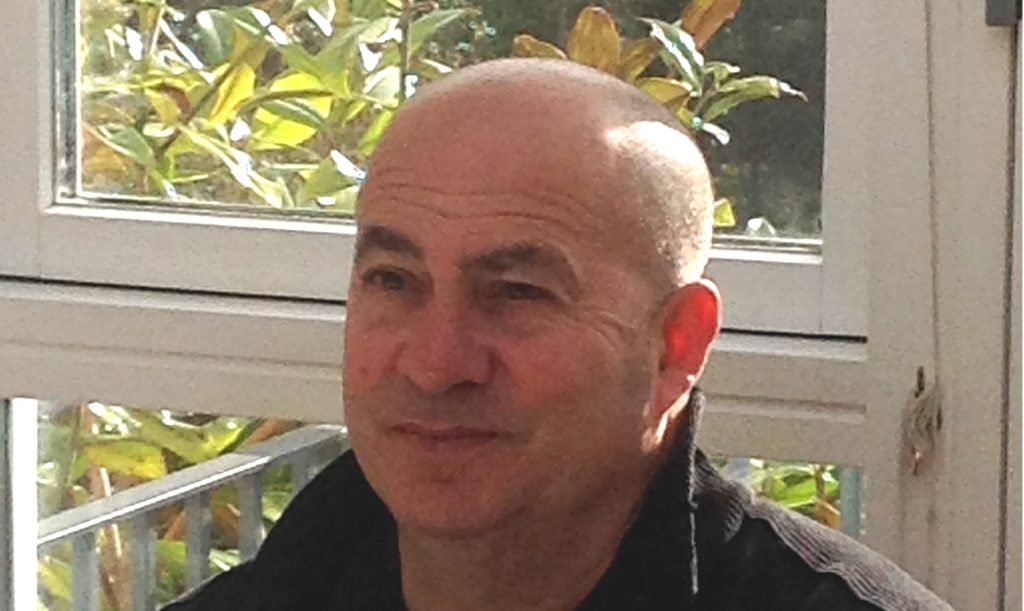 Can you explain about your time at the Pratt Institute in NY and why when it is mentioned in the art world we all sit up?

I suppose it might be because Pratt Institute has been around for a long time and many famous and talented people have been associated with it. Many important artists and designers have taught at Pratt. When you are at Pratt your world is opened up to many different disciplines associated with the arts — architecture, sculpture, painting and dance, for example, are all under the same roof. The most important thing I learned at Pratt was to think conceptually.

After the Pratt you worked as a designer and illustrator in the USA and Ireland can you discuss how this aspect of your work has allowed you to develop your current style?

Working as a designer and illustrator taught me to be disciplined about my work. At Pratt, I studied painting, drawing and printmaking which are all skills I still use. When I paint, I think a lot about the design of the picture.

Ed Miliano with his art

Your work ‘Fartha Wood Mural’: How did this project come about?

Joseph Walsh, the furniture designer, lovingly restored a traditional Irish cottage that his grandfather lived in using traditional techniques. Joseph wanted to put his own stamp on the cottage. That included inviting me to paint a mural that wraps around the entire interior of the parlour room. 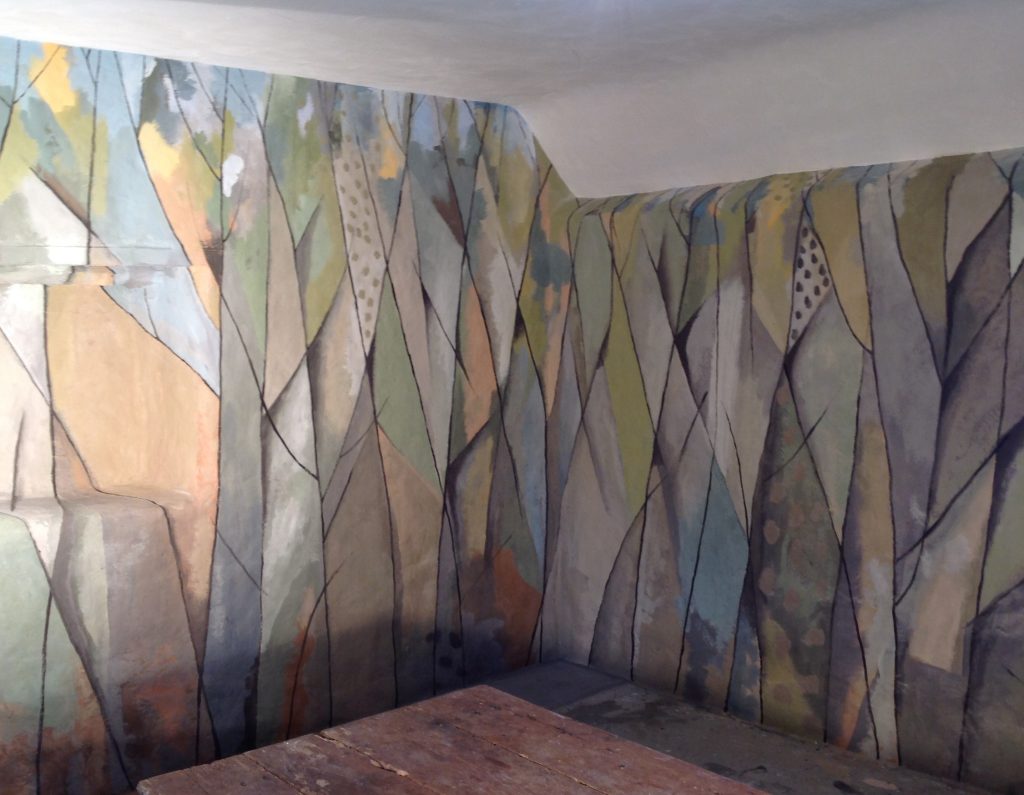 The materials, mud, lime, timber, and thatch how have they influenced the work?

How and where does the mural relate to the building and its use?

The mural wraps around four walls and the walls are undulating. It is a little like the cave paintings at Lascaux in that the texture and indentations really add to the work. The location of the cottage is in the countryside, surrounded by woods. The material they use at the studio is mostly wood. The mural fits into both the surrounding environment and has references to what is produced at the studio.

I made sample panels using lime plaster and did trials with a few different types of paint. The best were lime pigments from a paint supplier in Carlow that I could either mix with water or a bonding agent. I preferred the latter because it dried a little faster and it was easier to achieve certain effects. It is very similar to dry fresco.

What aspect of this project was to give you the greatest pleasure?

Joseph Walsh Studios is in rural Ireland and I really enjoyed working there because I was surrounded by nature. It’s also nice to work with people when you work alone most of the time. Joseph Walsh is a very inspirational designer and there is really good energy in his workshop. I loved the reactions I got from local people and those who visited the studio as the mural developed.

‘The Nature of Time’… 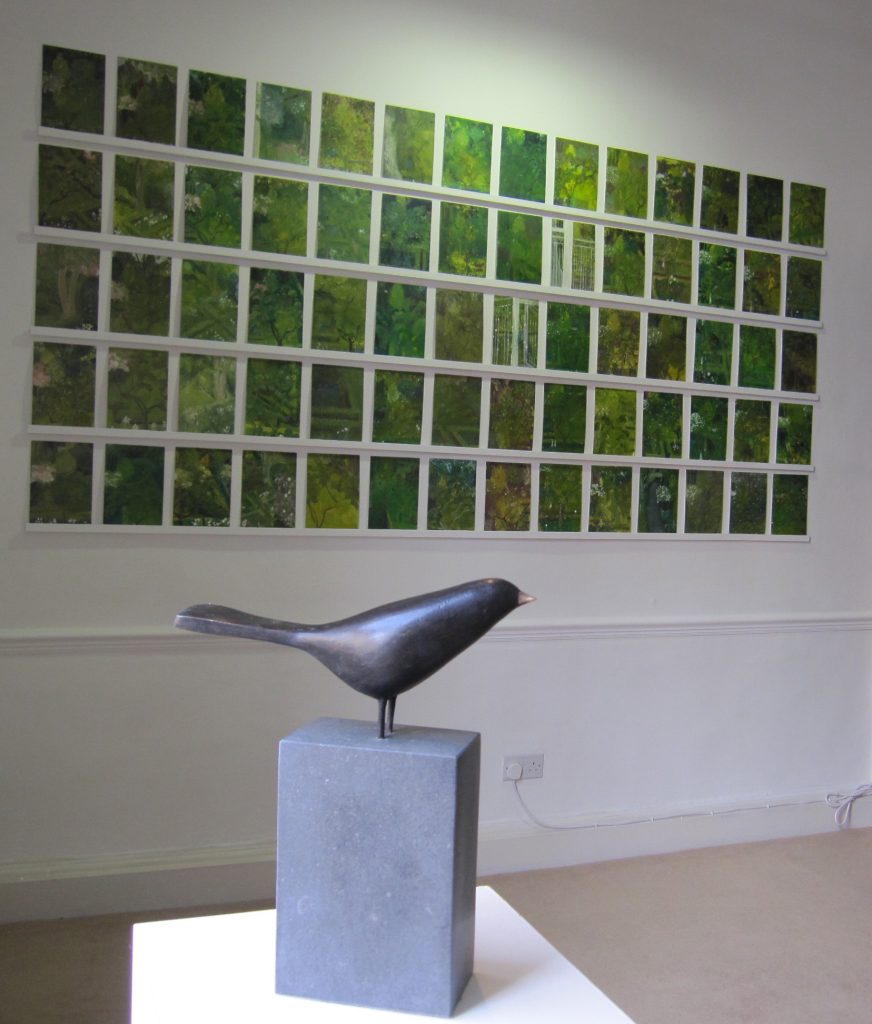 How do you describe this work, as an installation or a collection?

‘The Nature of Time’ was an exhibition at the Oliver Sears Gallery in Dublin, Ireland. Part of that exhibition was ‘Diary’, a very large piece I made in 2011-12. I painted the garden outside my studio every day for over a year. ‘Diary’ is both an installation and a collection. It is an installation because I change it to fit within the space it is being shown in. ‘Diary’ was first shown in the Royal Hibernian Academy (RHA) which is a modern museum-type space. There it was installed in one long wall, while at the Oliver Sears Gallery it was shown on six separate walls. The way it is installed changes the way it is viewed and makes the viewer notice different things. ‘Diary’ is also a collection of paintings. The individual paintings are part of a whole. This is a concept I am very interested in and am continuing to explore.

How did the inspiration come about?

I have studied Horticulture and am a very keen gardener. I have been developing the garden at our home in South County Dublin for over twenty years. In ‘Diary’, I wanted to create something that would collectively describe the garden in a way that one painting could not.

How important was the scale to this work?

The scale of the work was very important. When I started ‘Diary’ I made larger paintings but quickly realised I would have to reduce the size. Multiplying one painting by 366 yields very large results.

Before commencing did you have the Galleries space?

I did not have a gallery space secured before I started working on ‘Diary’. I wrote to institutions that I thought were suitable. The Royal Hibernian Academy (RHA) was one institution and Patrick Murphy, the director, made several studio visits to view the progression of the work. 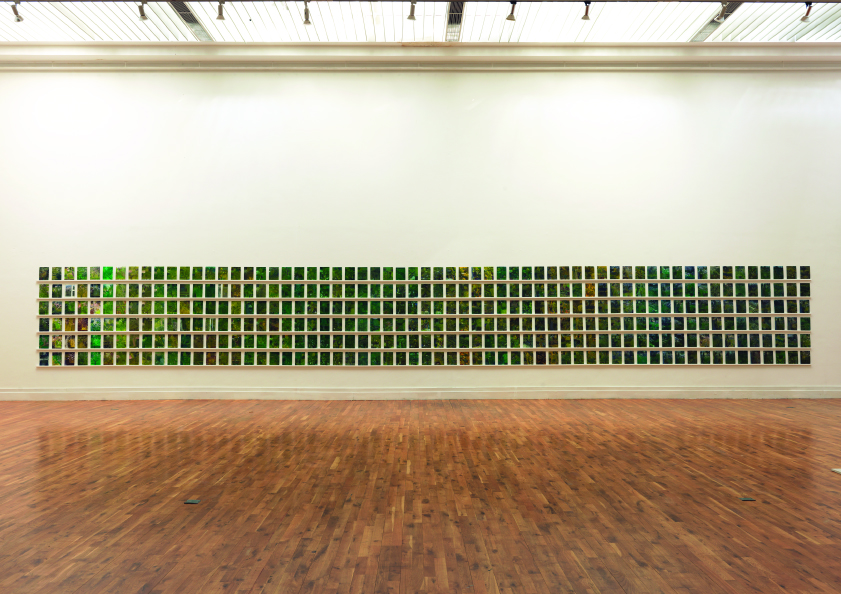 How important was it for you to look and re-look at the same space?

Looking over and over at the same space is a big part of what ‘Diary’ is about so that became very important to me. The same view would seem different from day to day depending on the light, the time of day, my mood, the weather and so on.

Expand on your feeling of connection between nature and man in this work?

Gardens are totally man-made and nature is wild. I love the idea of man trying to wrestle with nature in order to tame it. Nature doesn’t want to be controlled, but we persist. Birds fly into our garden — wild creatures that enter the garden freely. Even though we may want birds in our gardens, we don’t really have any control over them. They come and go as they please. For me, birds are a reminder of the wildness of nature. This thinking led me to make some bronze sculptures of blackbirds that I included in my exhibition. 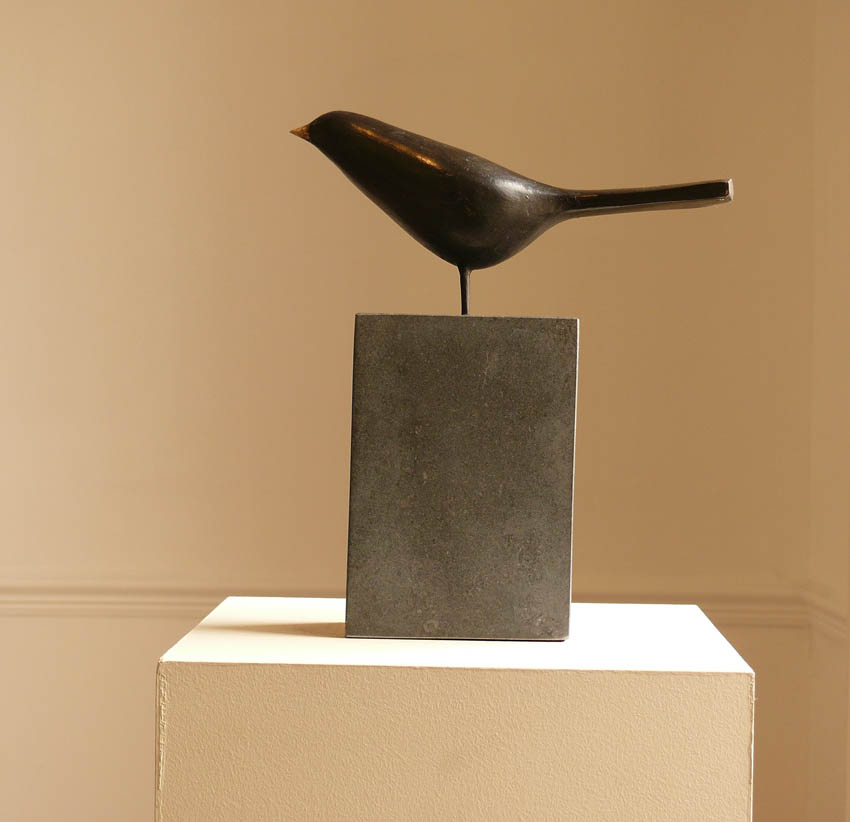 What aspect of colour and light did you need to work through?

In terms of colour and light, I basically reacted to and painted what I saw when I saw it. I liked to start a painting in the early morning but there were some days when I had to start later. A late start meant that the light was very different. I never worried too much about that though because I was creating a diary and if I had a late start it was for a reason. This all became part of the story.

Did you always paint the squares or did you have to rely on photographs at times due to other personal commitments?

I painted in my studio every day for 14 months in total. There was one time when I left after I finished a painting but returned before dark the next day so that I had time to complete the next one. At one point I was sick with a chest infection for a couple of weeks but I still went into the studio to make my picture and then crawled back into bed afterwards. 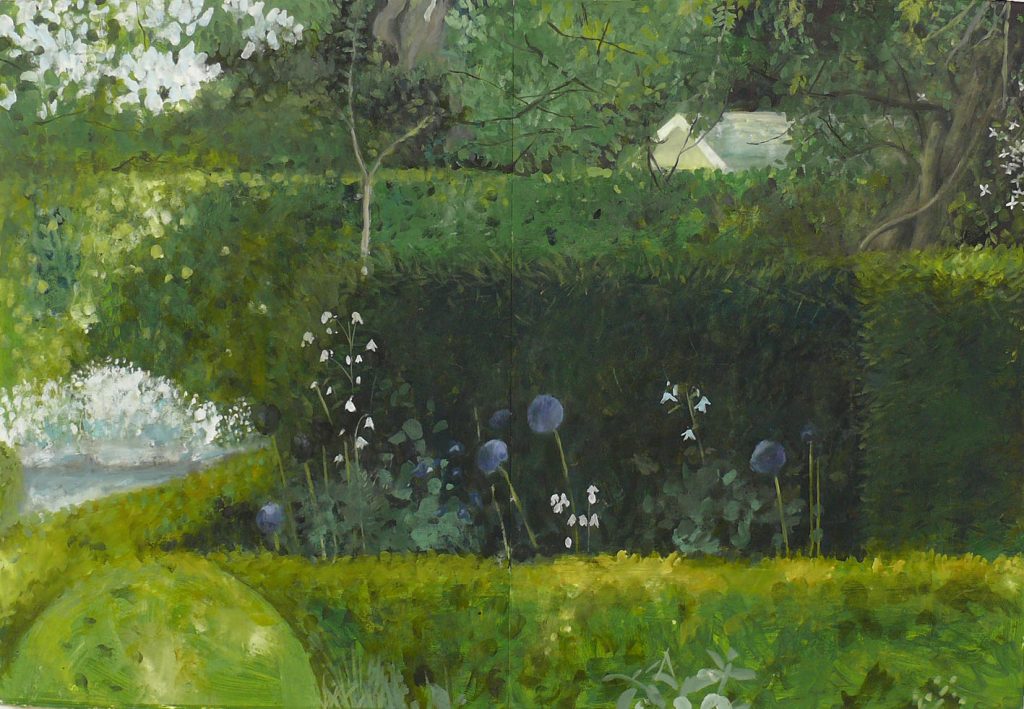 How did the amount of time needed for this project impact on your year?

Making ‘Diary’ became my whole life for the year. I loved making it and I loved the discipline. I like to set out rules for myself as a kind of matrix to work within. 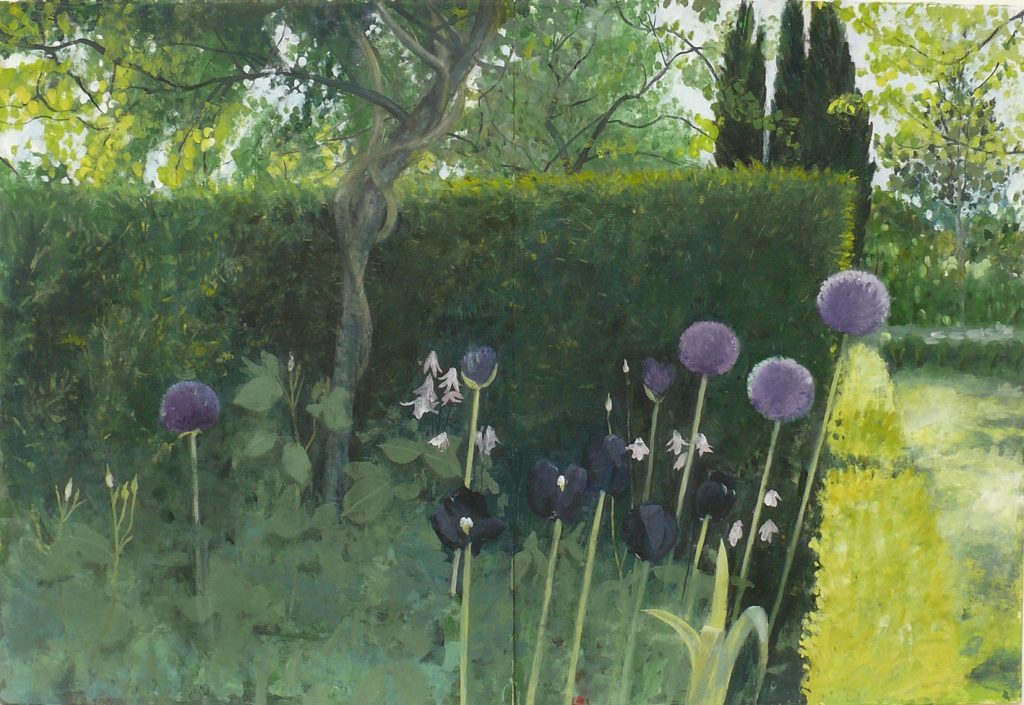 Would you suggest that others follow a similar project and what would they gain from the experience?

I don’t like suggesting ideas to other artists. The ideas and inspiration have to come from within.

What and where is the work now?

The work is with me in Tokyo. I am hoping to show it in Japan while I am here. I am convinced that it will really appeal to the Japanese aesthetic. I would also love for a museum or public institution to buy it and show it permanently. It has great impact and I want to keep it intact as one piece of work.

Did your work ‘Diary’ influence ‘Nature of Time’ project?

Yes of course, ‘Diary’ influenced my ‘Nature of Time’ exhibition. The new pictures expanded on some of the themes of ‘Diary’. I was also able to develop some of the ideas on a much larger scale.

Is it currently influencing you work today?

What lead to Four Days to becoming prints? 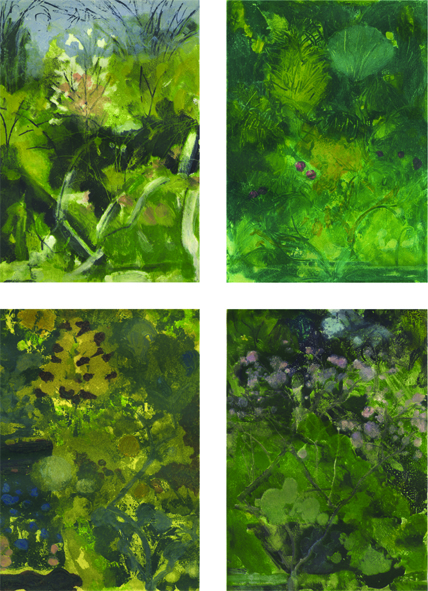 Since I planned to keep ‘Diary’ intact I thought a series of prints based on four of the paintings would be interesting as a smaller work. I also did some monoprints as part of ‘Diary’ so it wasn’t a huge stretch to make prints.

You have traveled extensively discuss the way you have to rethink colour in different environments and light?

Colour and light are different in different places and no matter where I am my environment affects me.

You are currently in Japan how is this country influencing your work?

I am looking at a lot of Japanese art and culture from all periods. Japan has a deep history and there is a lot to learn. I am reading about Japan and reading Japanese literature so naturally, it all has an influence on me. I want to take my time so I can understand the culture better but there are already some things I know I want to use in my work — for example, I love Japanese screens and the way Japanese artists use gold in paintings.

As an artist who has amazing travel locations discuss what you take and what you give to each country you live in?

I try to remain open-minded and receptive to new ideas and different ways of doing things. For example, in Japan I am studying Mokuhanga printmaking. This is a traditional technique using water-based inks that can be adapted to contemporary work.

Can you discuss your technique of using oil on paper?

I like painting on unprimed rag paper because it absorbs the paint quickly and dries fast. When the painting is finished, I apply three coats of gesso to the back of the paper to preserve it. I realise this is unorthodox but I have some work that is over ten years old and it is still in good condition.

Discuss the importance of exhibiting your art work and perhaps one or two aspects you have gain from an exhibition?

I love showing my work and I love ‘making’ a show. It is what I work towards. Exhibitions force me to look at my work and, in some way, they are like completing a chapter of my life.

Expand in the importance of composition in your art and art in general?

Composition is important but I don’t really think about it anymore. I think it is totally intuitive now.

Interview by Deborah Blakeley, May, 2015