David HentyHave you ever met a forger?Zoneone Arts brings you David Henty 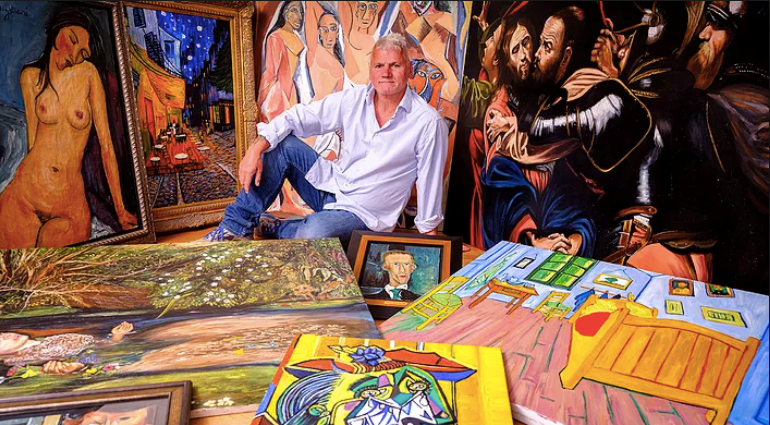 |In Painters, Uncategorized
|By Deborah Blakeley

How do you deal with the terms, art forger/ copyist?

I like it although I prefer “art forger” to “copyist”.  I’m always trying to replicate the look, the feel, and the patina of the original. Also, if possible, I source period canvases, paints and frames, so I believe I’m more akin to an art forger, than a mere copyist. Forgers have always been around, it is most definitely an art form in itself. 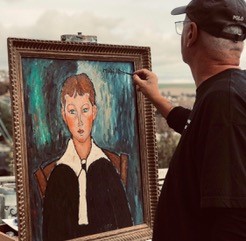 How do you handle doing such different work technically?

When I become interested in an artist I become obsessed. At the moment I’m working on Caravaggio’s ‘Card Sharps’. Last week it was Caravaggio’s ‘Entombment’.  I have a burning desire to learn all of his methods, his handwriting so to speak and his tricks. As with other artists I become interested in, I obsess about how they worked and achieved their results.  I always (where possible) study the original works.

How does it feel to be in your studio and home surrounded with so many famous artists?

I love waking up looking at Caravaggio’s ‘Taking of Christ’, which hangs full size in my bedroom.  I get a rush in my stomach when I catch sight of a William Waterhouse or a Picasso – which at the moment are stacked up against my studio wall.  There is a photo of Picasso in his home in France, he had a room packed and stacked with art by the likes of Modigliani, Cezanne, and Matisse.  He collected the crème of 1920’s artwork. That is how I feel.

Where did the idea of using your artistic skills in this way come from?

I have always been able to draw and I loved copying different handwriting styles when I was a kid. I come from quite a large family, all of whom have an artistic bent. My sister is the best selling author Shani Struthers, my brother Paul is a horologist, my brother Steven a landscape gardener, my brother Tony a jeweller and my brother Dane an amateur painter.

Comment on your art in comparison to the originals, housed in bank vaults?

I have a firm belief that art should be accessible to everyone, to be admired, loved and to give a feeling of pleasure to the viewer – not stuck in a bank vault. The two most expensive paintings in the world Picasso’s ‘Les Femmes d’Alger’ and Leonardo’s ‘Salvator Mundi’ are two paintings that I have thoroughly enjoyed painting. 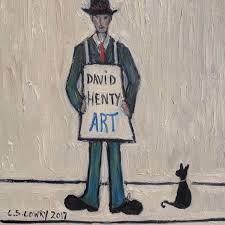 How has Peter James been influenced by you and your art in his writing?

Being born and bred in Brighton, I have a few tales to tell and a few colourful experiences from my sometimes misspent youth! Peter James collaborated with former Commander of Brighton & Hove Police, Graham Bartlett in a book about some of Graham’s arrests and so, over lunch, we chatted about some of my stories.

How do you choose your artists and which of their paintings to copy?

I’m drawn by the stories of an artists’ life, Modigliani and Soutine for example, both had fascinating back-stories as did Caravaggio, who was the first ‘bad boy’ of art.  I have to love a painting in order to faithfully reproduce it. 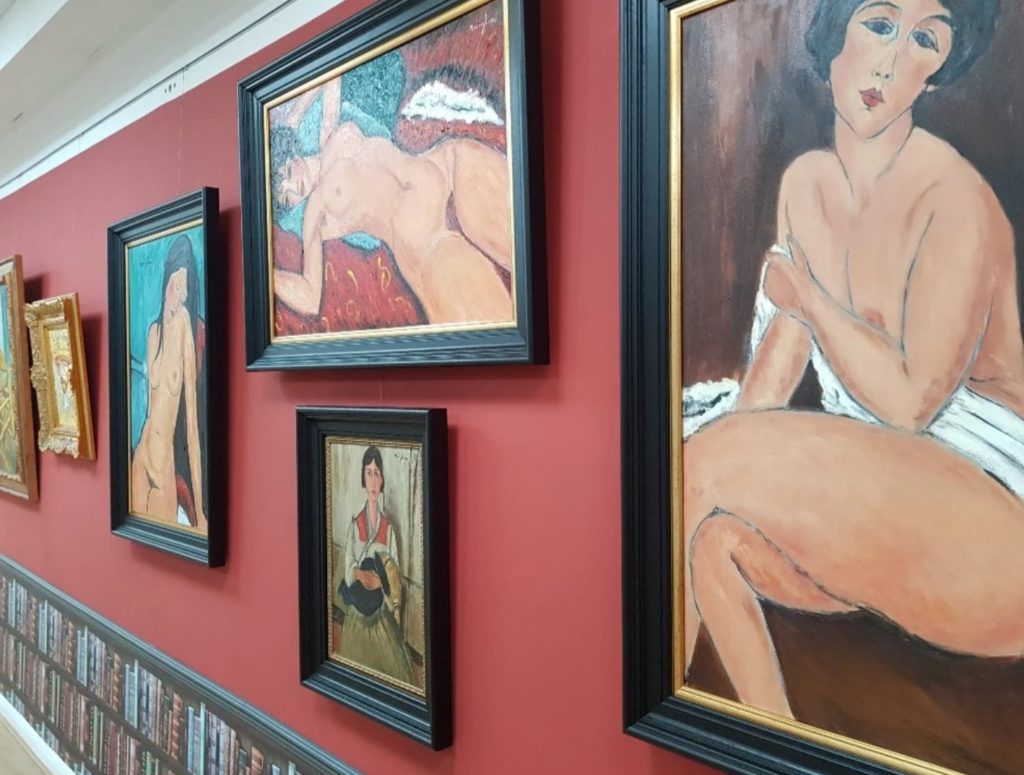 Do you have a limit of the number of times you will paint a painting?

Once I have overcome the challenge of a painting, I’m not really interested in repeating it – unless it’s a commission of course.

Do you mind telling how your time in prison helped you to your new career?

Not at all. My time ‘inside’ helped me to focus my attentions on creating art and I have never looked back. It was whilst in prison that I fell in love with painting and the art of recreating masterpieces. I have been absorbed in the technicality ever since. 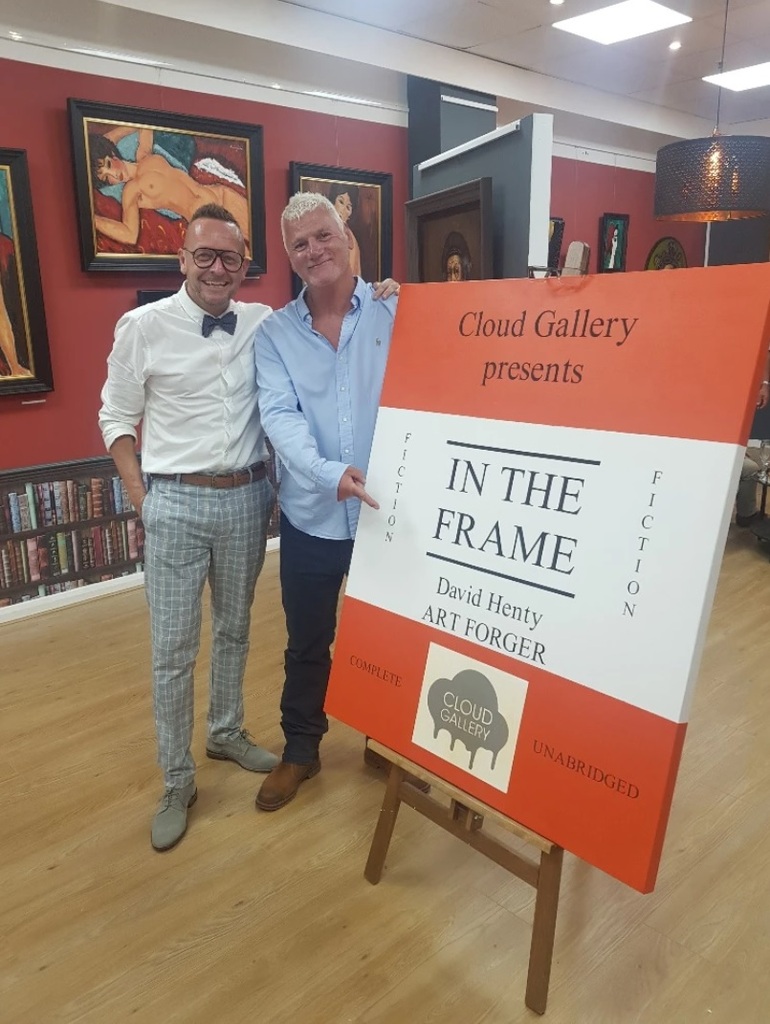 What are some things that you have learnt from three different artists?

From Caravaggio: the lightning strike drama.

From Modigliani: the fine line.

From Picasso: creativity and always being in the “flow”.

What advice can you give to art student when looking closely at art in a gallery?

I would say look closely and then look again. Look at nature and try to frame and photograph it in your mind. 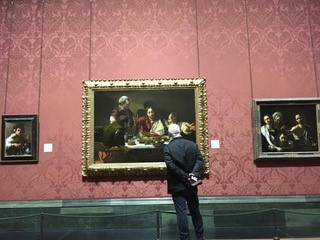 If you could invite five artists to dinner, whom would you ask?

Well it would probably end up as a drunken, boozy brawl, but I would invite, 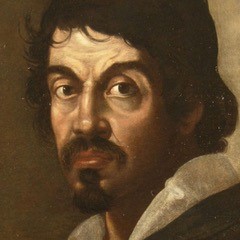 Michelangelo Merisi da Caravaggio was an Italian painter active in Rome for most of his artistic life. During the final four years of his life he moved between Naples, Malta, and Sicily until his death. Wikipedia Pablo Ruiz Picasso was a Spanish painter, sculptor, printmaker, ceramicist and theatre designer who spent most of his adult life in France. Wikipedia 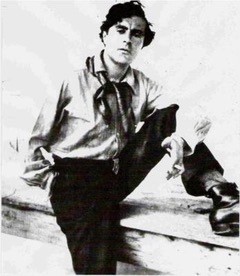 Amedeo Clemente Modigliani was an Italian Jewish painter and sculptor who worked mainly in France. He is known for portraits and nudes in a modern style characterized by elongation of faces, necks, and figures that were not received well during his lifetime but later found acceptance. Wikipedia 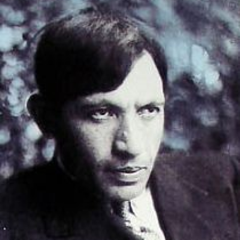 Chaïm Soutine was a French painter of Lithuanian Jewish origin. Soutine made a major contribution to the expressionist movement while living in Paris. Wikipedia 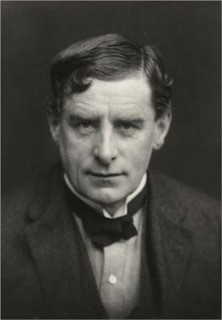 Walter Richard Sickert RA RBA was a British painter and printmaker who was a member of the Camden Town Group of Post-Impressionist artists in early 20th-century London. He was an important influence on distinctively British styles of avant-garde art in the mid- and late 20th century. Wikipedia

What would you what to ask each of them?  Or would you just throw in one open question?

I would ask them if I could watch them work, from conception through to completion. I would just like to stand in their shoes and look through their eyes.

What is on the back of all, of your art so that there is no question of forgery?

How do you cope with finding the right frames for each piece? 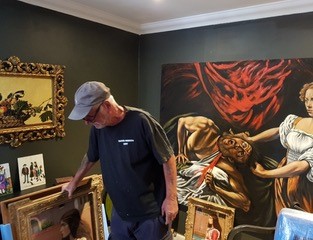 David Henty on the hunt.

I love looking in antique shops, which my hometown of Brighton is renowned for (happily!) I also visit markets and antique fairs looking for period frames. France also has some great markets to pick up old canvases and last but not least, the framer I work with is also brilliant at matching frames to paintings. 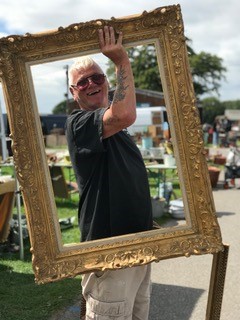 Luck of the find

Have you painted any Australian artists work?