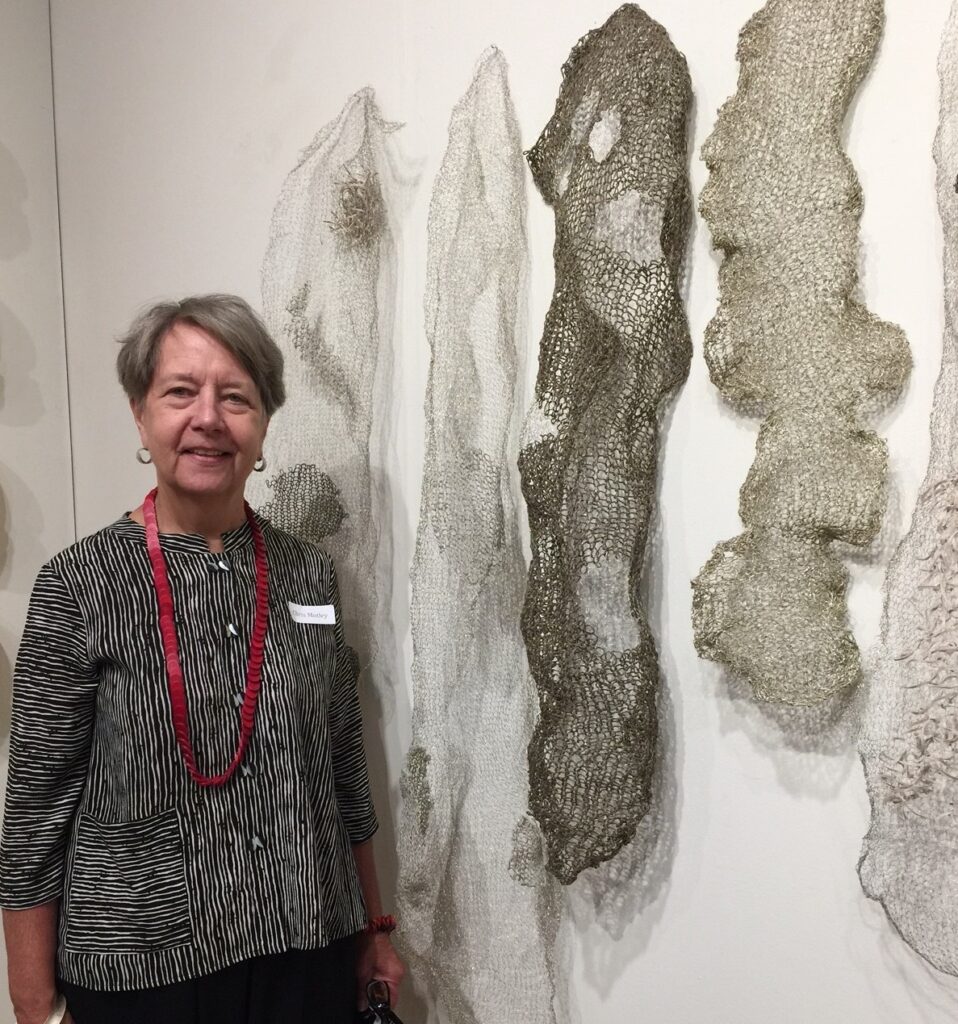 |In Textile Artists
|By Deborah Blakeley

What led you to take knitting to another level? 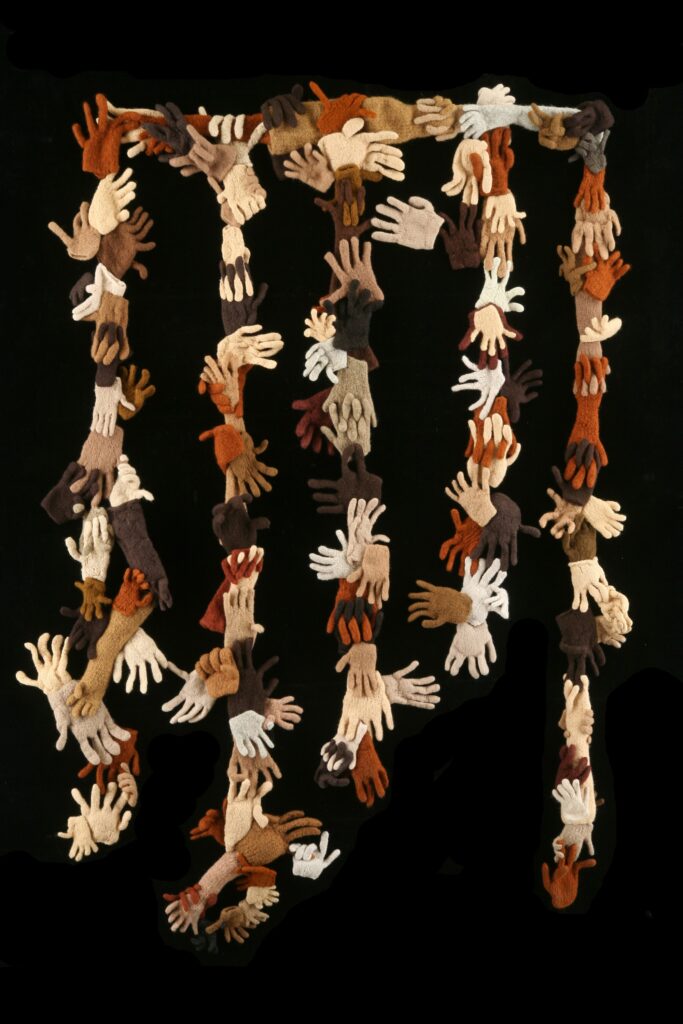 My mother taught me to knit when I was in grade school, so I’ve been knitting for 50 years or so.  I can’t say I meant for my knitting to start doing art in addition to garments. But even before I retired I had started visualizing knit items in three dimensions and I was selling knit neckpieces made with 3-D oval shapes.  It was so great to see my name tag at an open house at one of the stores identify me as “Artist.” (But I didn’t actually call myself an artist for several more years.)  I was a lawyer for 30 years, and really enjoyed it, but knitting was also always there.  It’s second nature to me so it easily evolved! 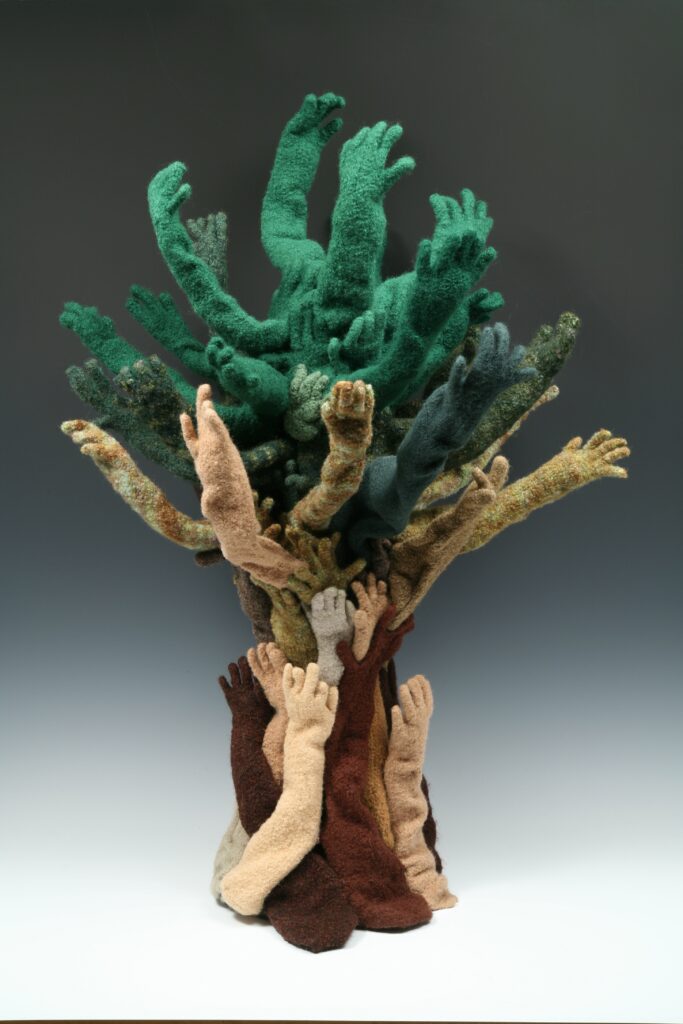 What really started my advancement was happening to see an announcement for a two-day class at the California College of the Arts titled “Sculptural Knitting.”  Wow, I thought – I’m not off base!  That was a great class and four other women attending asked me after to join their critique group – we’re still meeting now 12 years later!  Their encouragement and support was very instrumental in my artistic development.  I now belong to an additional critique group and it is great community.  My lawyer friends comment on how I transitioned will into retirement, and my artist friends were always so surprised to find out my career was as a lawyer – FUN!

For how long have you been knitting with wire? My first knit wire was very early on, when I knit three wine glasses with wire – they of courses did not remain upright and I titled the three together lying down “A Long Night.”  There was then a long hiatus on using wire; the real development of wire pieces started in 2016 when I knit a piece about the climate with wire using very light wool yarn to fill in the leaves with green and then brown, “Brown is the New Green.”  And wire plays a large part of my piece “Steeling Ourselves.” I have to attribute this development into using wire to Karen Searle and Tracy Krumm both of whom use wire in their art and from whom I have taken a class.

You may like to read the interview on Zoneone Arts with Tracy Krumm in April 2014 https://zoneonearts.com.au/tracy-krumm/ What are some of the difficulties in knitting with wire?

As long as I don’t use wire that is very rigid, knitting wire of a smaller gauge isn’t difficult.  But there is a limit in knitting three dimensional pieces in wire that are closed such as a ball.  In order to knit it, I use flexible wire but its very flexibility makes it unable to retain its shape unless it is handled very carefully; thus it’s just not practical to make a closed shape than is difficult to reshape it gets flattened. Even with thin wire I sometimes put a band-aid on my wrapping finger to protect it.  My wire pieces are thus one dimensional. 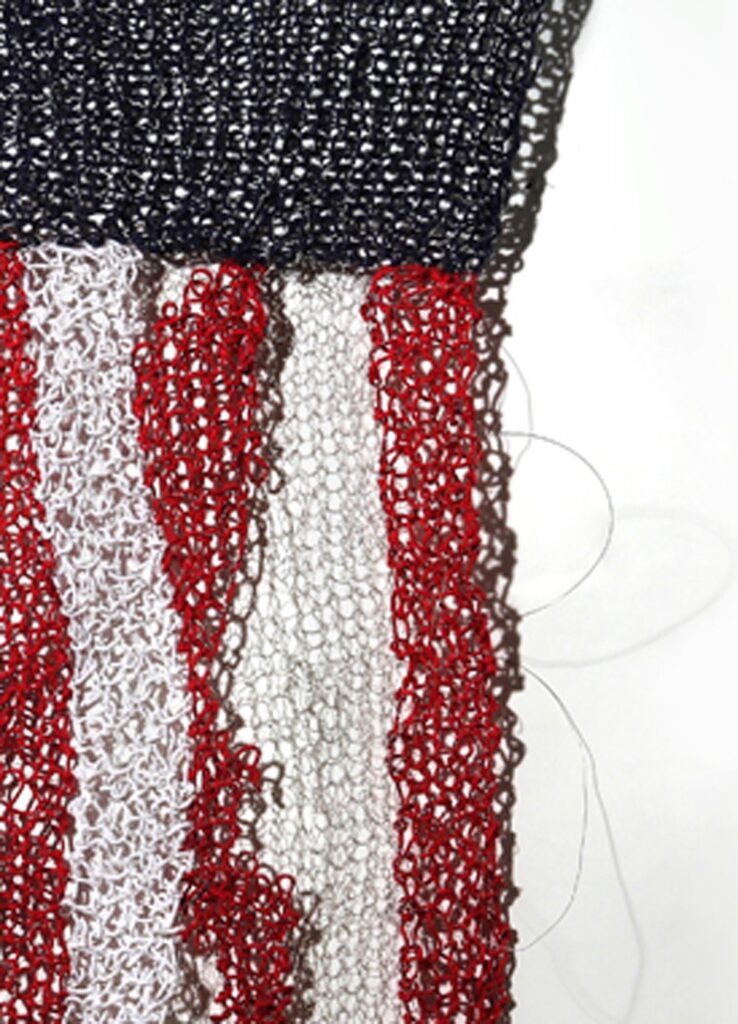 The inspiration for ‘Steeling Ourselves’ is, simply put, our current president and the state of our country for many of us during his term.  It is made with silver wire knit together with linen cord for the color.  I purposely created holes in the knitting to further represent his impact.  I  have not done other work of political commentary.  Most of my pieces dwell on creating representations of a mood.

Though not political, I have done pieces which comment on societal situations.  In addition to Homeless, Reaching Green, which portrays arms formed into the shape of a tree which are brown at the bottom and green at the top, is a comment on climate change.  ‘Helping Hands’ is made of knit hands from browns, beige and reddish hands clasping together to express a hope for outreach.

You comment, “A design can emerge as I knit.” Discuss

Most of my pieces are constructed from small knit pieces which I then sew together into a piece.  There is thus a period of time when I’m knitting the many individual pieces.  As I’m knitting those, I start with something in mind about how I will assemble them.  Knitting is a meditative process and working on the pieces helps create different pictures of how they can fit together.  And then when I pin the pieces up on a board to plan the assembling, the developing can continue.  A piece that was begun to be round seems to work better stretched out, or with the pieces closer together than I had pictured when I started. 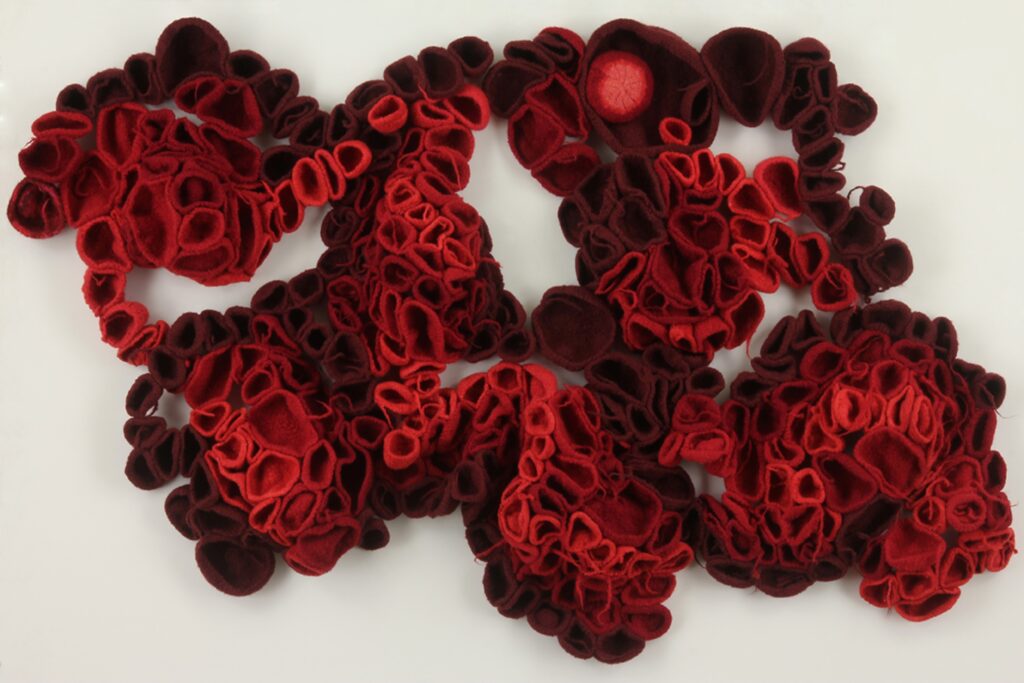 Tell us about your work, ‘Homeless’. The unsheltered homeless people are often in tents, but many are simply sleeping on cardboard on the sidewalk.  The homeless are compelling, and I wanted to represent their situation in my art.  I made a myriad of squares that represent squares of a knit blanket if they were sewn together.  They are laid in the shape of a sleeping body on cardboard which I literally found on the street, with a found pair of beaten up tennis shoes. Colour is so much a part of your work  – How do you acquire the coloured materials you knit with?

I do not dye the wool with which I knit; there is a myriad of color choice in purchased wool yarn.  I have a wonderful, wonderful yarn store near me, Imagiknit, and I purchase it there, or less often online or at another store if I don’t find what I need.  And there are such a myriad other materials when I’m not fulling the piece. ‘Quiet’ is a piece that many can see the actual knitting.  Discuss this piece.

I titled this piece Quiet because of its lack of color.  It is constructed with a variety of fibers, wools and ribbon all in a range of white and beige. I composed it from a large selection of the small pieces that I had knit individually.  As with most of my pieces, I pin the individual pieces on a foam core board, moving them around until I find the pattern with which I’m satisfied.  Only then do I sew them together. I did a similar piece in reds exploring the colors.   I decided to frame these pieces since they didn’t present well on their own and I thought framing would strengthen them.

How has Corona 19 effected your exhibition schedule?

When the pandemic began I had pieces at two galleries.  Both galleries retained the pieces in case they could be shown in person in the future. One gallery was able to open recently after presenting the show online, but the other was only online.

During the shutdown, how have you used your time to develop your art and art practice?

Except for about a week period of adjustment at the beginning of this shutdown, when I lacked  inspiration, it was easier to knit sweaters for my grandchildren.  Since then my art practice hasn’t been affected except to provide even more time to do my art, since socializing and going to events is restricted to the computer.  My spouse is working at home, but he’s busily ensconced in an office on another floor, so that is not affecting my art at all.  It continues including my critique groups, which are now via Zoom. You have been in many juried exhibitions.  Comment on the benefits of these against exhibitions.

Simply put, juried exhibitions provide a forum for those of us artists who are not represented by a gallery.  I started applying early on, encouraged by my critique group – I had no idea then what a juried show was.  It’s much less work that an exhibition though probably not regarded as prestigious as a full exhibition.  I’m just delighted someone wants to see my work! 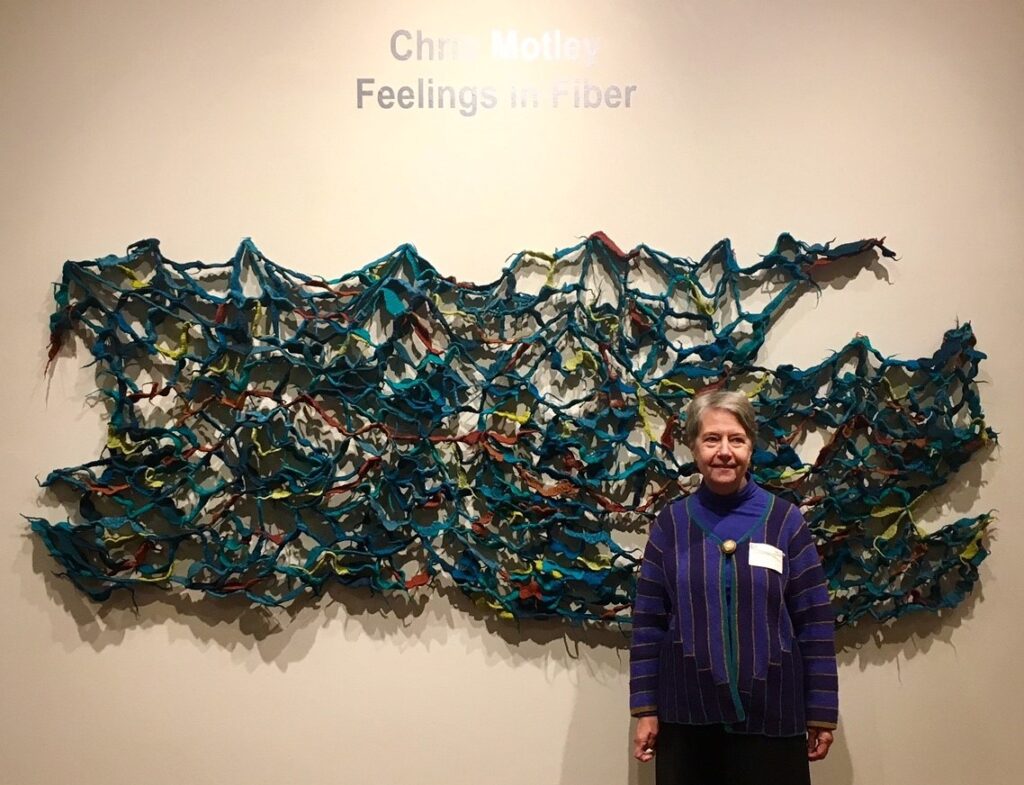 ‘Stream of Consciousness’ at the Morris Graves Museum in Humboldt, CA. Name of the show was Feelings in Fiber #2

Take one or two pieces that have driven your work forward.  Expand what the changes have been and how they have expanded your work.

When I started my art, I concentrated on knit pieces of the human body.  The first piece I ever showed was of a torso with an upraised arm scratching her back with a backscratcher – this represented my mother after my father died.  I continued doing human heads and hands for quite a while. The huge jump came when I made Almost A-Round, which was my first piece made of smaller parts and is totally abstract. 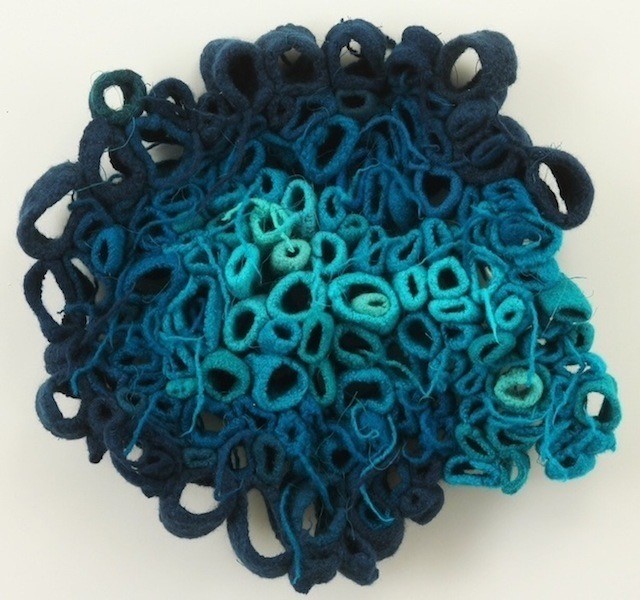 That method has flourished into using a variety of shapes – circles, cups, various flat shapes presented flat or on their edge, or ropes.  All can be assembled into a never-ending variety of finished pieces.