Chris Langlois, Sydney, AustraliaChris Langlois paints grandeur while everything is big he manages to either keep that feel or reduces it through cropping and thoughtful composition. He says of his work, “it is anywhere and nowhere”.Zoneone Arts is delighted to bring Chris Langlois to you… 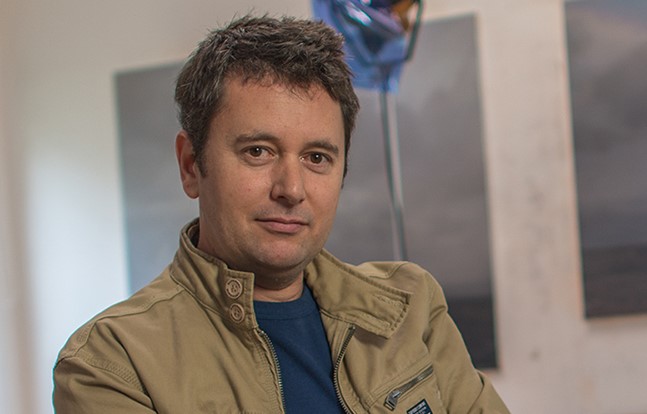 You have had work in the travelling exhibition, ‘Points of Time’.  Discuss some of the issues that you had to contend with due to the travel the paintings would go on.

The ‘Points in Time’ exhibition was a touring survey of works from 2003 to 2013 that was organised and funded by Manly Art Gallery and Museum in New South Wales, and Gippsland Art Gallery in Victoria. It toured for approximately 18 months throughout Queensland, New South Wales and Victoria. We received funding from various Government Arts funding bodies to help finance the exhibition, including funding for the crating and transport of works in between participating regional galleries. I didn’t have much to do with moving the paintings between shows. Curators at each gallery would be responsible for checking the condition of the works, unpacking and preparing them for transport.

Your comment. “My paintings are more travelled that I am” expand on this?

I really said that out of frustration when curating ‘Points in Time’. I had a ‘hit’ list of works I wanted in the survey, works that I felt illustrated the themes that I had explored. Well it was one thing to go through your catalogue of work and put a show together on paper, but quite the other to physically get your hands on the work and hang it in a gallery. All the paintings had to be located, and a lot of them had been sold and sold again, some we couldn’t find, and some we were initially unable to locate, and then through some strange twist of fate, appeared. More often than not we would find the works in other parts of the world, like in the Mediterranean, New York, a couple in the UK, Switzerland and on and on. Obviously the cost of bringing the paintings back to Australia was prohibitive and disappointingly, could not included in the survey. So after twelve months or so of trying to locate works, in frustration, I said, ‘my paintings are more travelled than I am’. 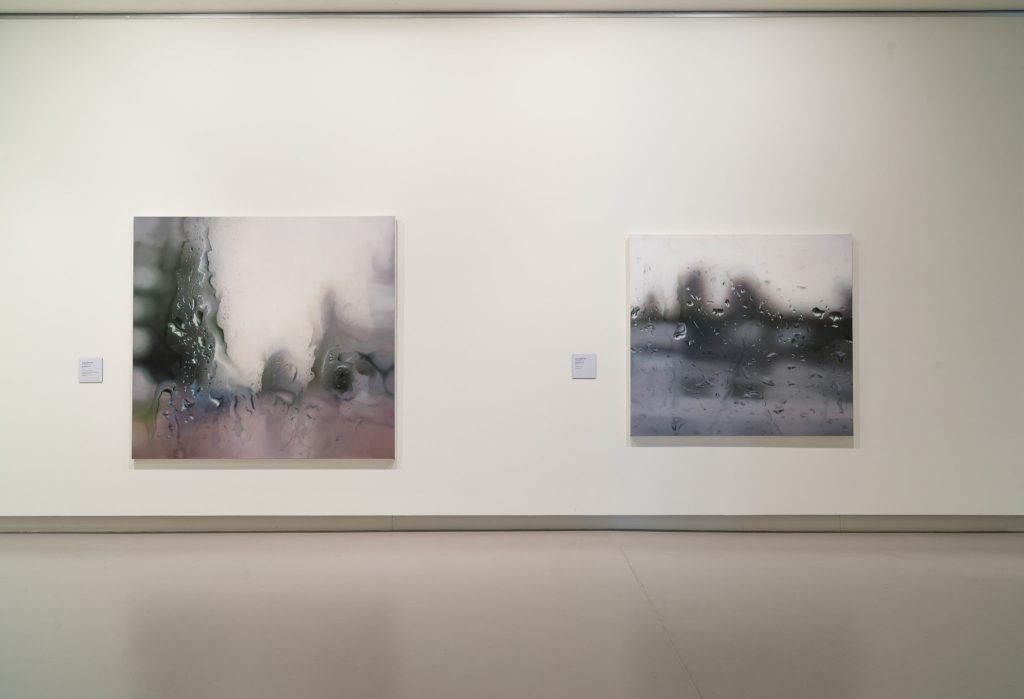 Many of your exhibition titles conjure up your landscape work, ‘Close space’, ‘Winter Weather’, ‘Another Place’,’ Land, Sea, and Sky’.  Discuss both the titles and your comments on the importance of an exhibitions title. 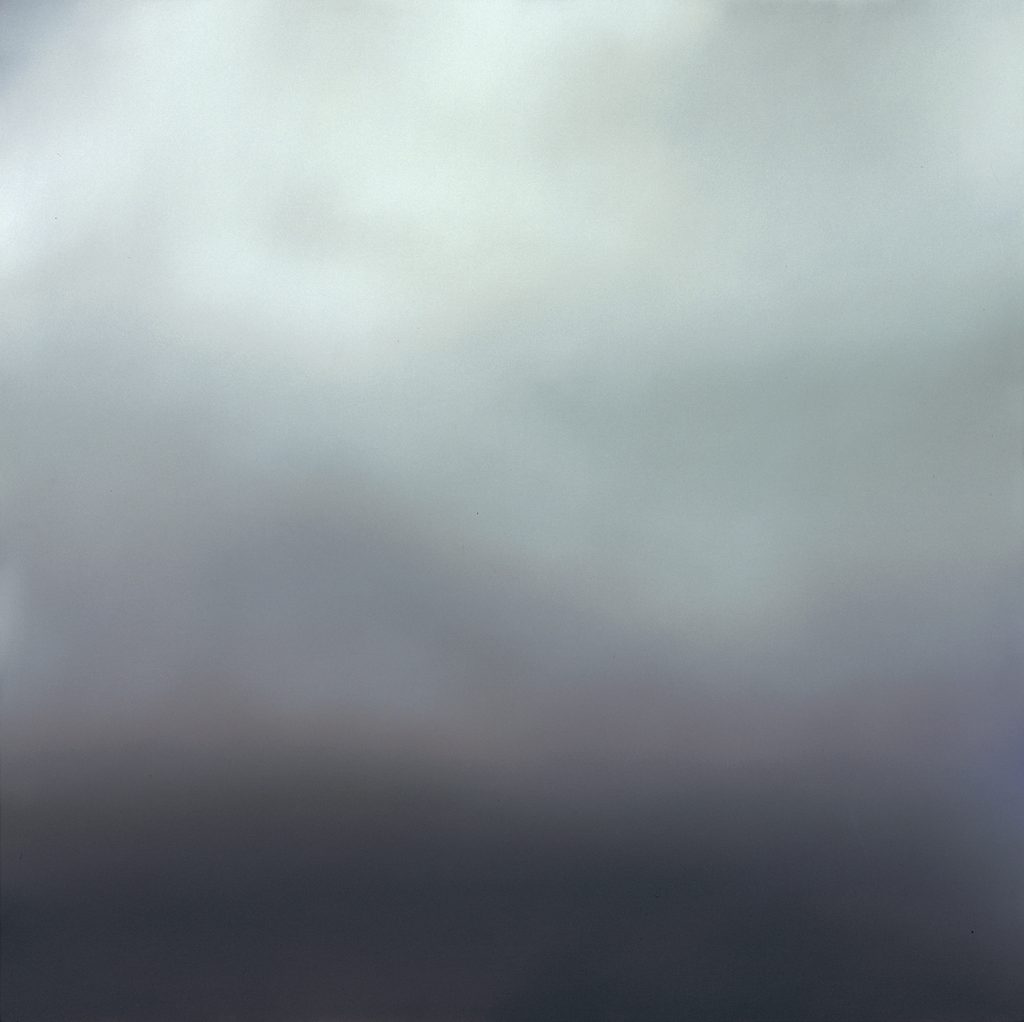 A title gives a finished body of work a headstone, and tries to encapsulate the essence of the work, sometimes vaguely or other times more objectively. ‘Close Space’ was a body of work of landscapes that were shrouded, open claustrophobic spaces, I liked the juxtaposition of the two words, ‘Close’ and ‘Space’. ‘Winter Weather’, the works was literally from winter, and it was also a title of a song I liked at the time by Smog. ‘Waterfield’ was a body of abstracted images of landscape through water. I felt there were similarities between these works and the Colour Field movement in the mid 20th century. ‘Fading to Nought’ were very blured images that almost represented nothing, but not quite. ‘Half Light’ paintings between night and day. Music is a huge influence on what I do, and I’ll reflect that in the titles, ‘Darkwood’ by David Darling, ‘Weather Systems’ by Andrew Bird.

You do both Solo and Group exhibitions discuss the pros and cons for both.

Can’t say that there are any cons to either. When it comes to group shows, I enjoy the contact with other artists, its good to be a part of something, to be included. Solo shows are nerve racking, but very rewarding. Most of my time in the studio is preparing for solo shows.

Can you take us through the technical processes your work before you touch a canvas?

Mostly I will have an idea for a body of work, and using photography, I’ll go out to wherever that may be and find images based on those ideas. I sometimes find what I’m after, but quite often, I’ll find something better, or not find what I was after at all. I will then work through the images in my studio, on the computer, and select the ones that have a quality, a painterly quality, refine the composition, colour and print them. Then live with the images that have been printed, pinning them to the wall of the studio. The images I end up painting just stand out, and the rest go into a big box of photos. I use the photo as a starting point, I am not painting the photo, the photo is a reference only.

As your work encompasses large landscapes does your work require large canvases?

Scale is important; doing what I do on a large scale, doesn’t work on a small scale. Space needs space, anything smaller than 3 foot square becomes intimate and the viewer wants/needs to be close to the painting. Larger paintings work both from afar and close up.

How are you restricted by size?

Storage space, my studio walls, the gallery front door and stairs restrict the size of works. I’d love to paint 2×2 meters all the time, but people who collect and buy art don’t have endless space. 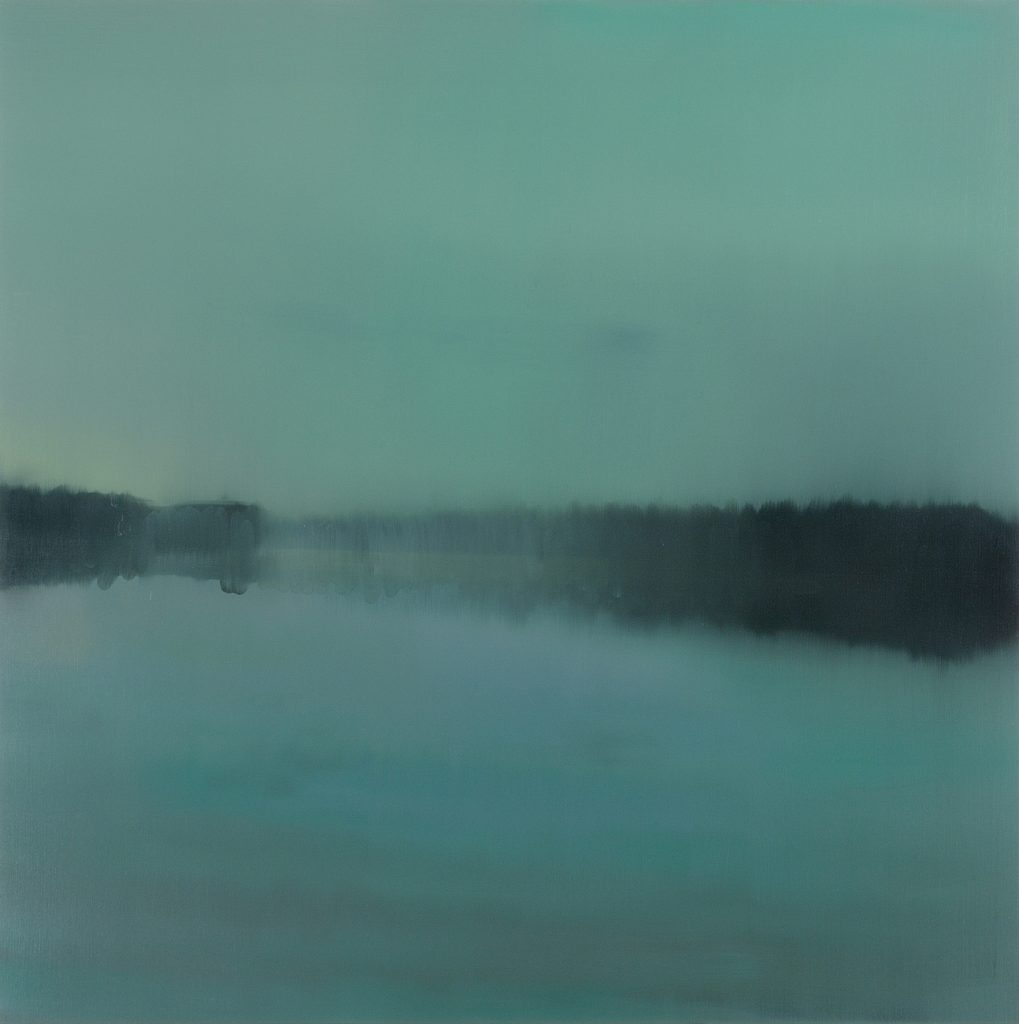 Is all of your work done in your studio? 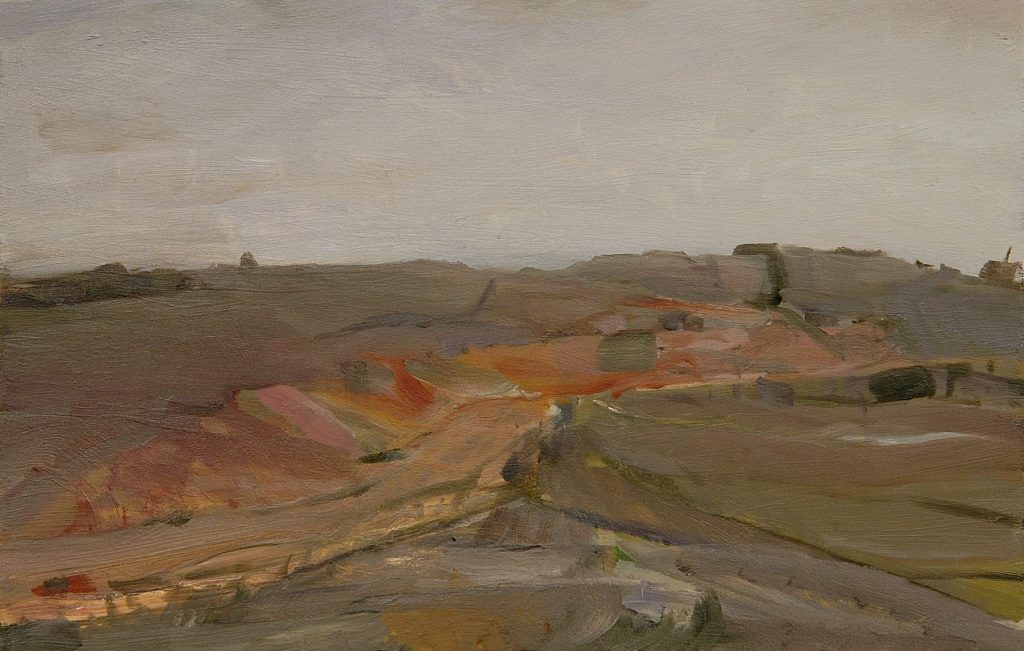 There are also paintings that I call sketches, and they are painted outside. They are entirely different to the larger works; intimate to be viewed closely. It’s one way of throwing a spanner in the works, as it is counter to my usual studio practice. Especially as I am used to working in a private and comfortable studio, I find it challenging and difficult to pull off. Working like this is the opposite to using a viewfinder to help compose an image; instead you have all of the landscape in front of you, and you can’t fit it all into a tiny rectangle. The challenge then is dealing with all the challenges of the painting process all at once in a difficult painting environment. However, it forces you to look and study the landscape and after several days of working out of doors I become more aware of the colour and structure in landscape, and that is what I’m looking to take back to the studio. 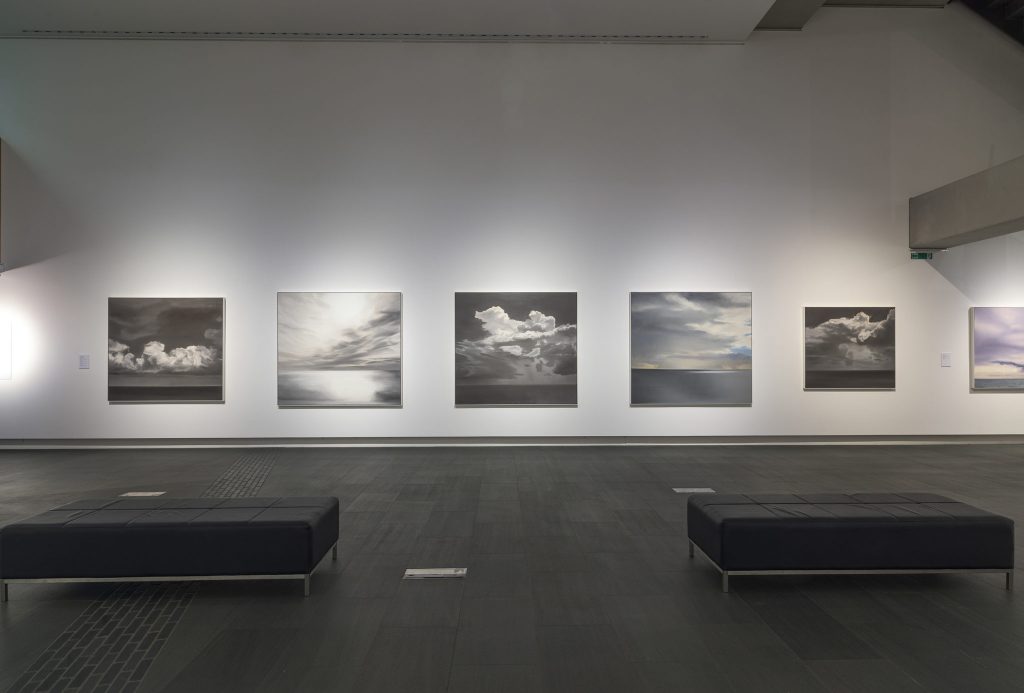 Some of your resent works have developed following the Australian bushfires, expand on this work? 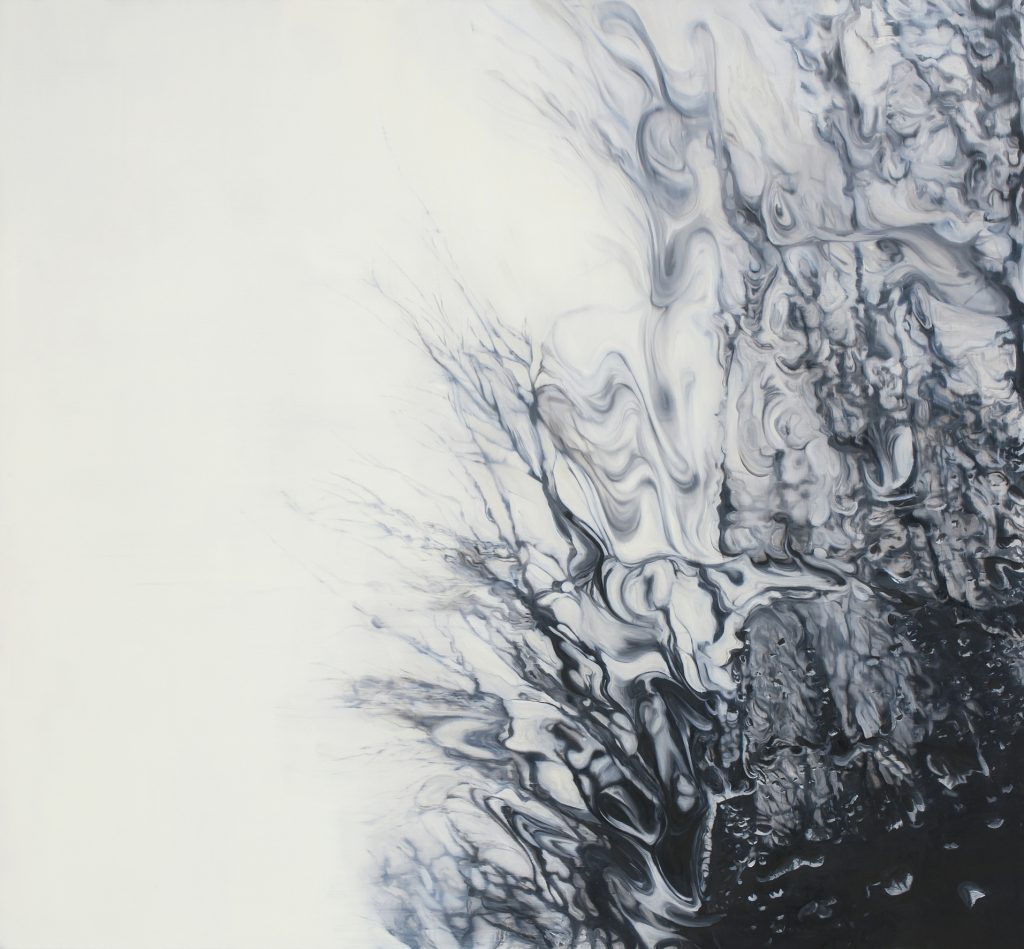 That was Kosciuszko National Park. It was a couple of years after a major fire had gone through very large areas of the park. Kosciuszko is full of snow gums, and apparently after fire they die right back and grow from the base of the tree. So, it was a very haunting scene, miles after miles of dead bush, black silhouettes against grey deaden skies, viewed through glass and water from a window of a moving car. I was interested in painting these images as they allowed me to play with the real and unreal in the same image. They blur between the literal and abstract back and forth endlessly, at one point being an object and next a blob of pure tone and then back into an object. 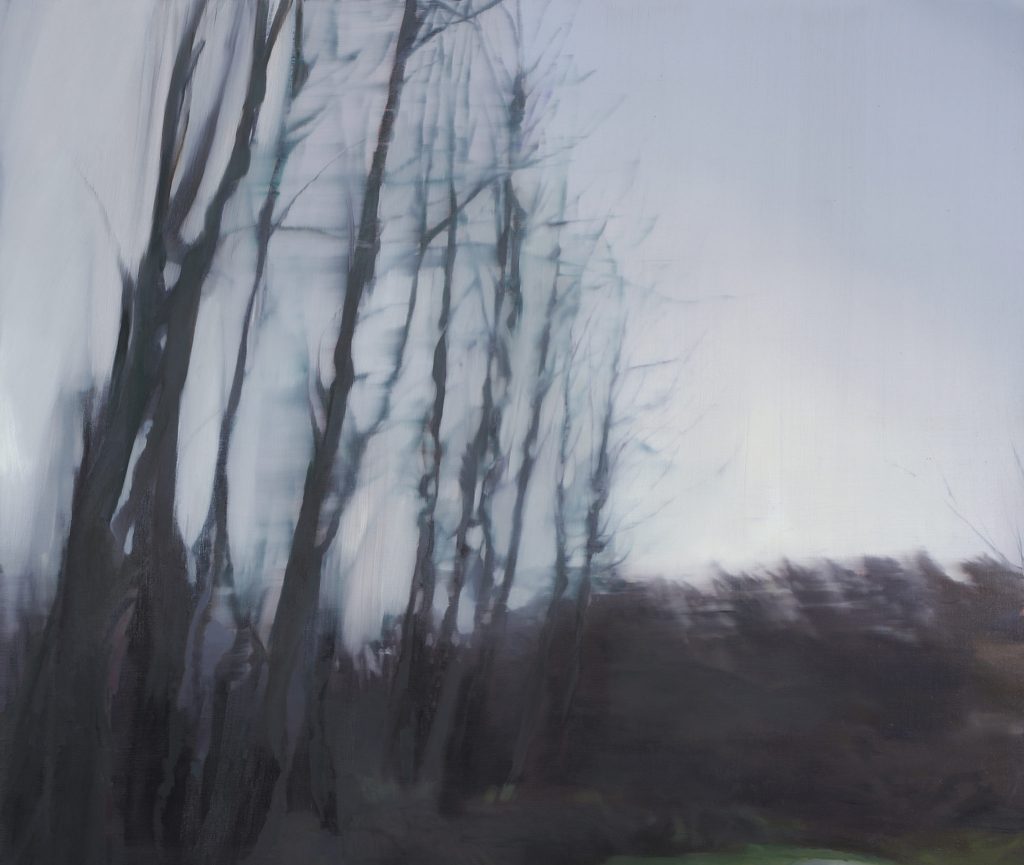 Comment on your palette of tones and colours, and your use of limited colours?

I like to work tonally, as you say I use a limited palette, mainly complimentary and split complimentary greys, sometimes two complimentary greys or tetrad, my favourite combinations are alizarin crimson/phthalo green and violet/Italian brown-pink, and Ill muck around with warm and cool variations. I use semi transparent layers, and will float cool variations of colour over a warmer base, eg a phthalo blue over an ultramarine blue. You can’t see it in reproductions, but in the flesh, it creates an illusion of depth. 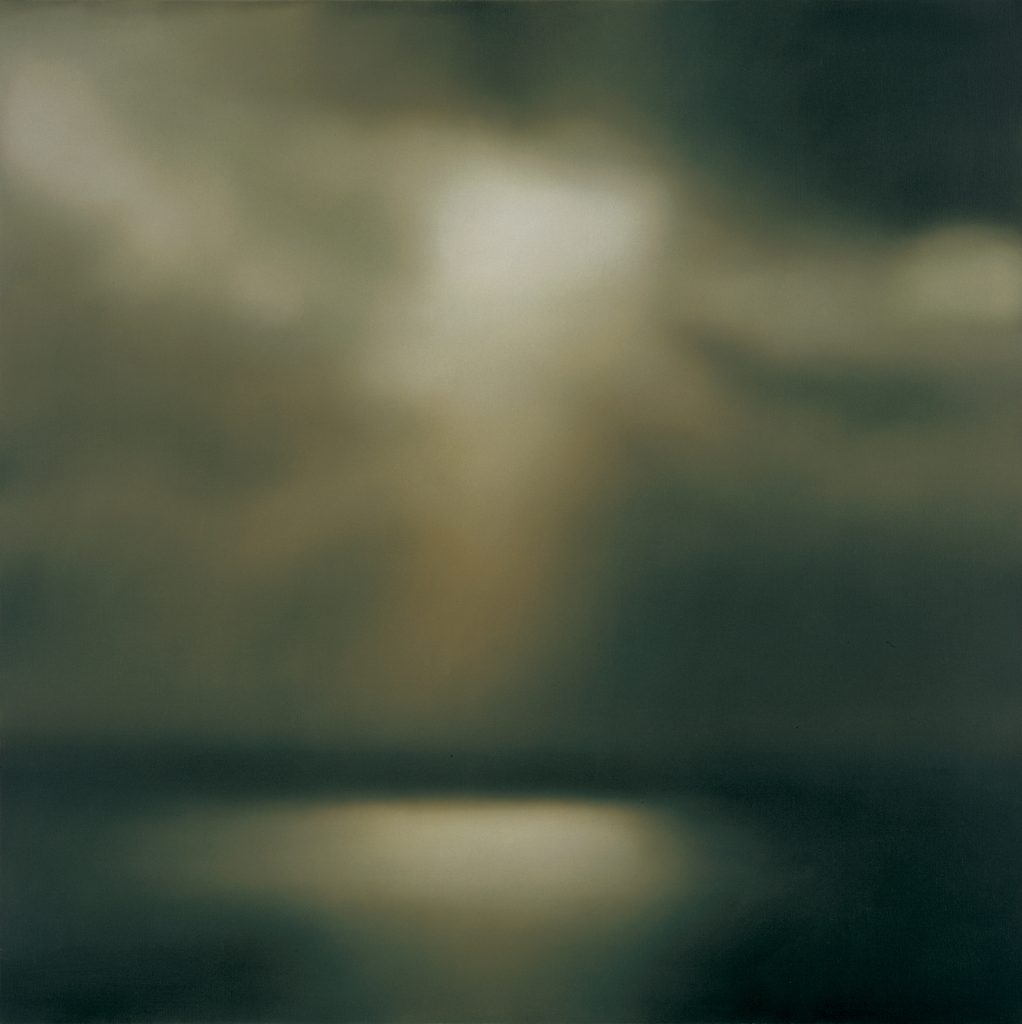 Comment on how you mix your paint to achieve the colours you use and the recording to you can make more at a later date?

I mix partly on palette, and I also mix on the canvas. I cover the whole canvas with a very very thin layer turps/linseed and work into that medium, spreading the paint very thinly with large brushes. I should make notes, but I don’t. 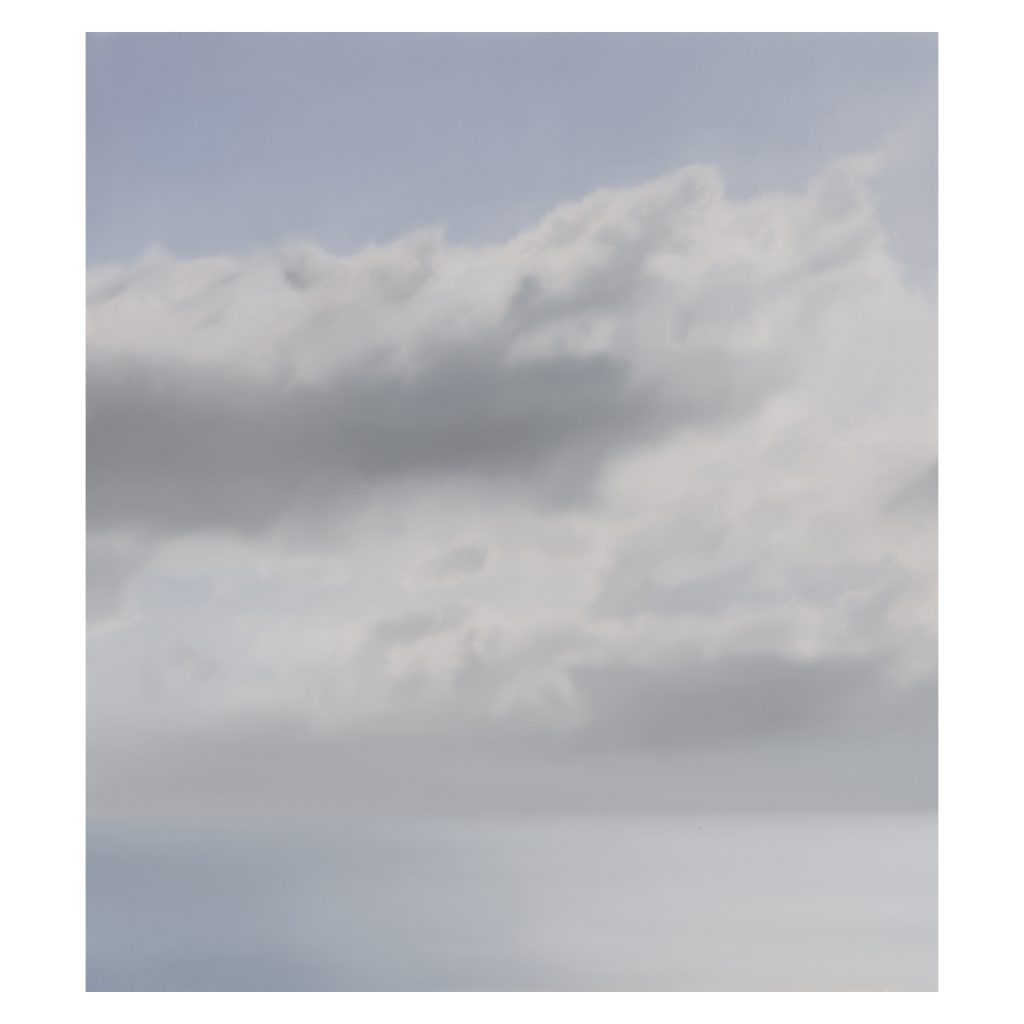 You work with many Regional Galleries in Australia.  Expand on the importance of their role to… 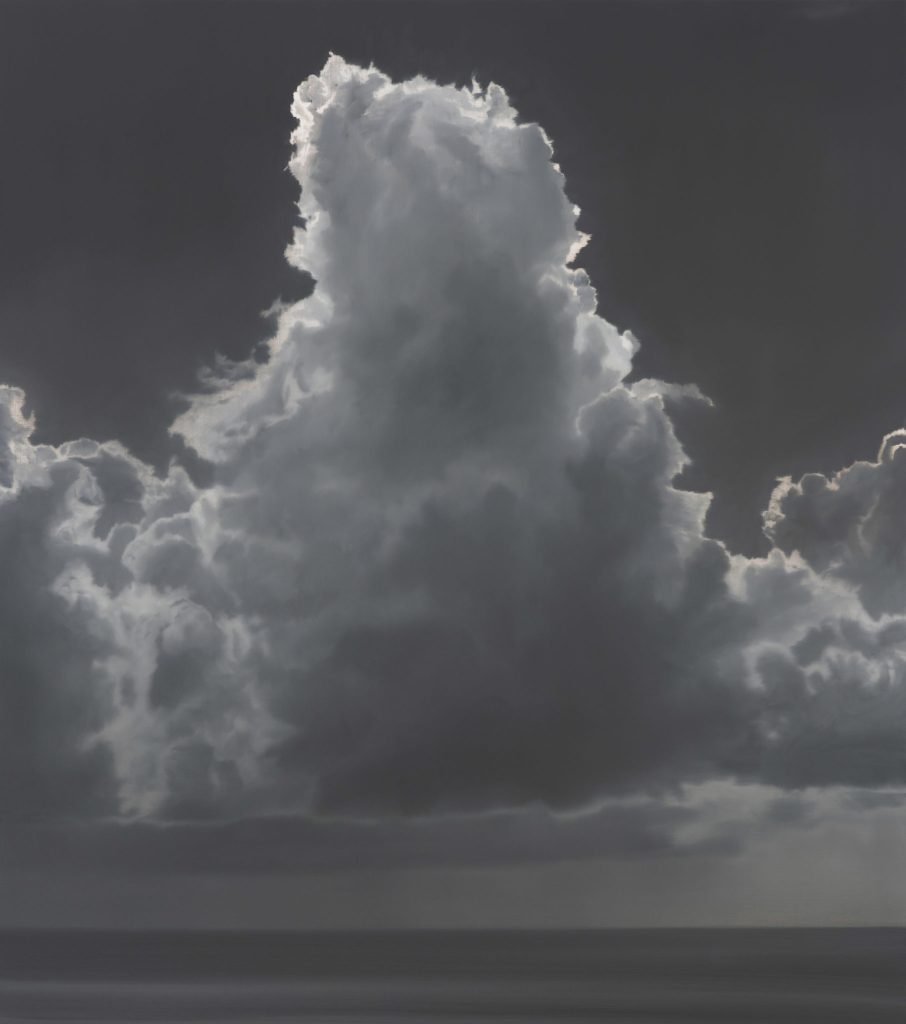 Regionals show the best of local art to people visiting the region and bring in artists and their work from around Australia and the world for locals in the region to see. 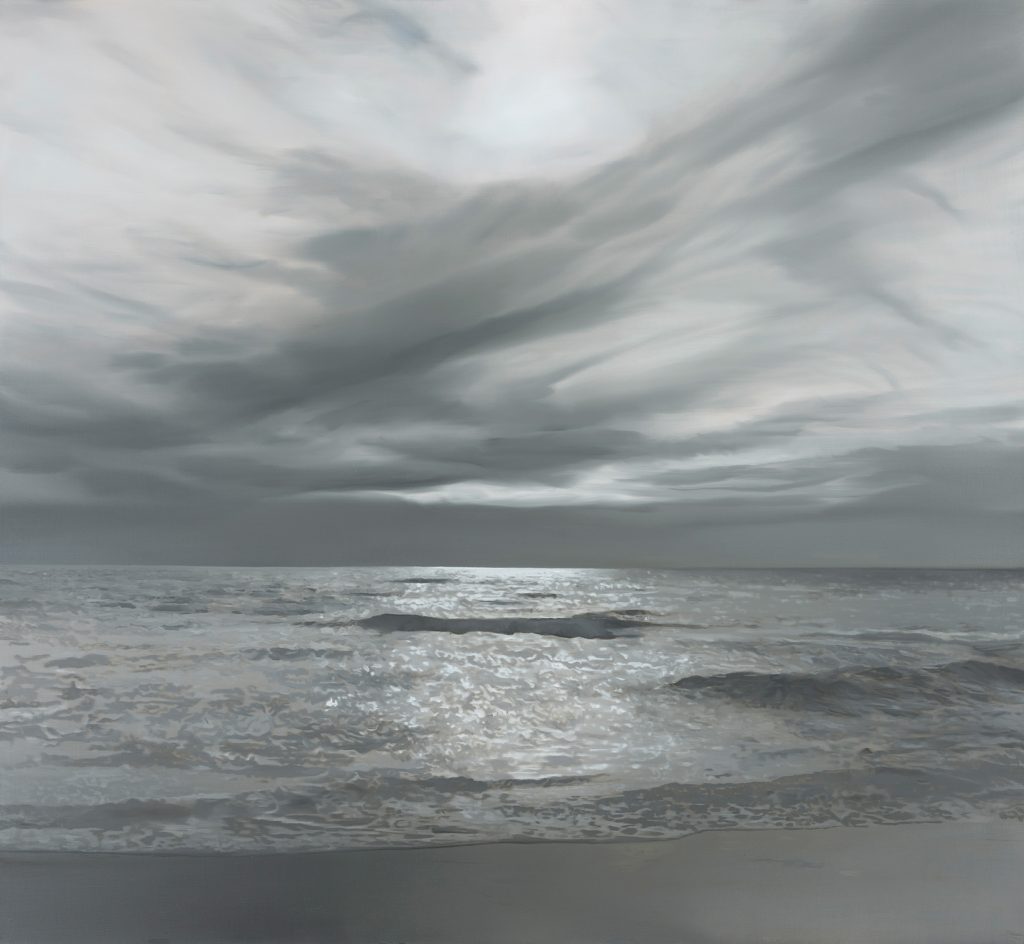 Does your rural New South Wales background have a strong influence on your work?

It did to start with but I don’t think so any more.

‘Of anywhere to nowhere’ is a comment you have made can you expand on this in relation to your work?

There are two ways to approach landscape; scientifically/accurately, or from a personal experience. I approach it from the later, not as a mapable and identifiable place that is somewhere, but a landscape that is anywhere. A landscape that is nowhere that could be somewhere or anywhere. Obscurity is important with what I paint, as soon as you get bogged down in locality details the magic for me is lost, and the viewer gets lost in the artists ability to render a scene accurately. So what I want to bring to the viewer is an experience, a sense of familiarity, a connection between landscape and memory. 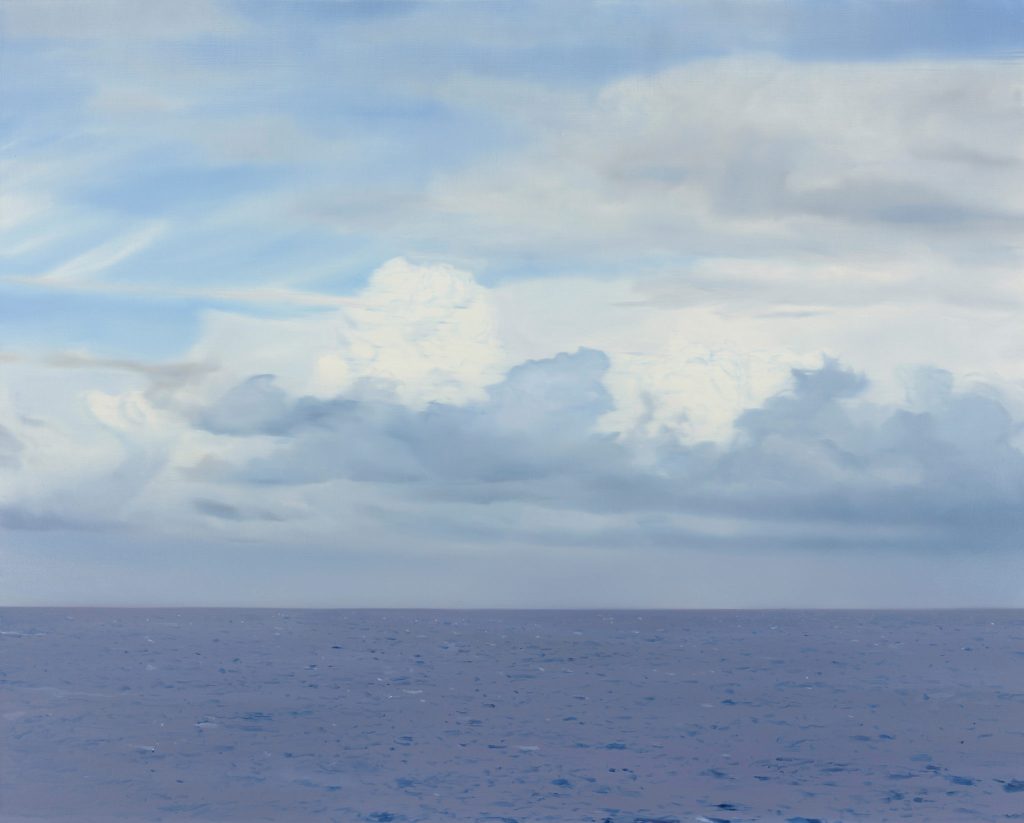