Audrey Grant uses oils to bring her figures alive onto the canvas. Most of the figures are solitary and require both the artist Audrey Grant and you the viewer; to connect over her work. Audrey Grant uses a combination of muted colours, deep backgrounds and the simplicity of her lone figure in her paintings. Grant leaves the viewer with the task of introducing the why and how? Who is this person? Where are they? What do they do? Where are they heading?“My hope is that my work conveys some kind of human feeling and if people react on a feeling level then I am very pleased.” Audrey GrantZoneone Arts is delighted to bring Audrey Grant to you... 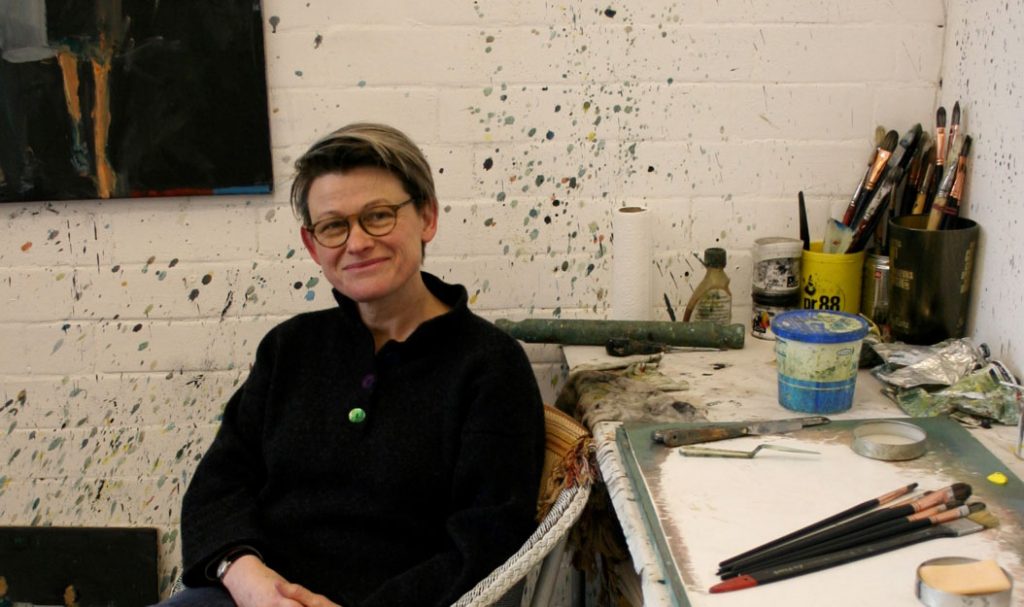 In 2002-2003 you took a figure painting course at Leith School of Art.  Can you explain how this has affected your current work?

I have always been fascinated by the human form and its study I feel is a very important grounding of any artistic training. I joined the course after a period of absence from creating work so it was a good course to reconnect to what was important to me and cemented my interest in the figure. 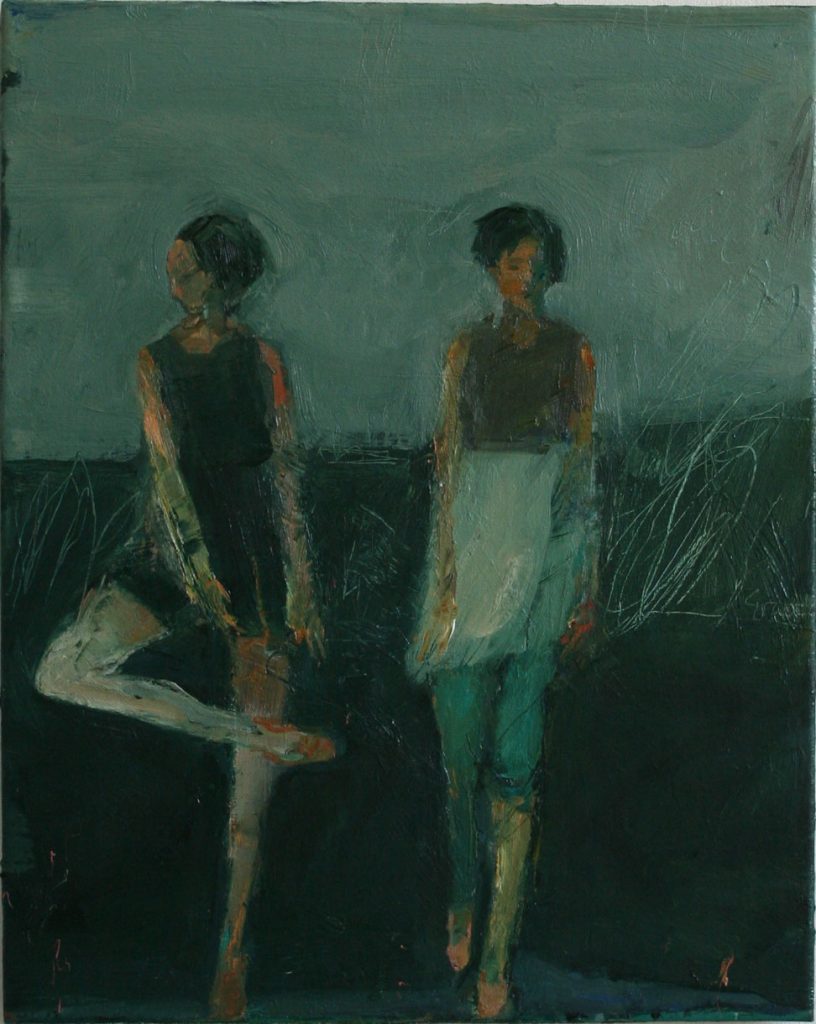 Can you discuss your involvement in the Edinburgh International Festival?

I have worked for the Edinburgh International Festival for many years in various capacities but in the last 10 years as an artist working on some of their schools education projects. Although this year I received a creative commission to work alongside writer Mary Paulson-Ellis, which will culminate in a small exhibition during the August Festival called -The Evolution of a Creative Idea.

You have had your first solo exhibition at UNIONgallery in Edinburgh elaborate on the amount of time and work this has taken you for this solo exhibition?

“This exhibition was a ‘sell out’, marking Audrey Grant an artist to watch for.” Deborah Blakeley

Showing at the Union Gallery is a great experience, there are just two of them (Rob and Alison) but they manage a pretty ambitious monthly programme of exhibitions. They are incredibly supportive and considerate towards their artists creating very positive working relationships. The new work came as a result of what came before and has been germinating since my last show there in 2011. Well over a year but also a lifetime of one’s experiences.

You have recently won the Anne Redpath award.  Please explain about this award and your painting “Man III”? 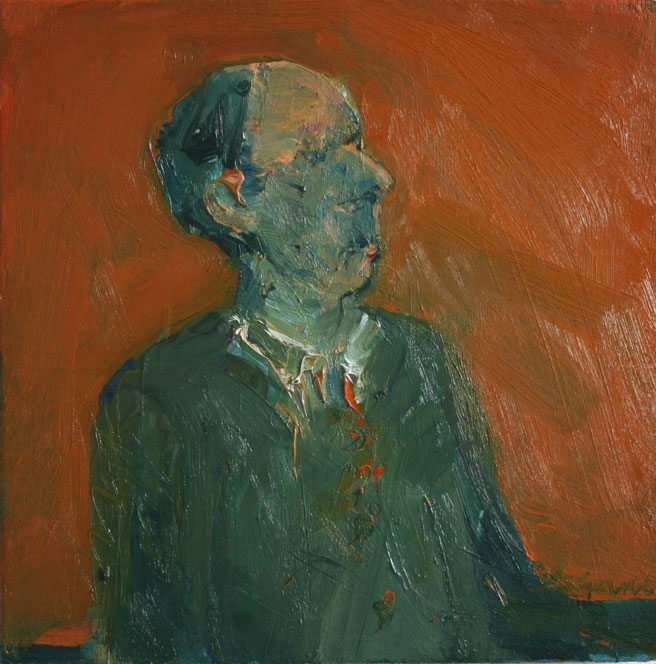 The Anne Redpath Award is for painting and is awarded by Visual Arts Scotland at their annual exhibition. All paintings in the exhibition are eligible. I was delighted to receive such a prestigious award for Man III which is a small painting of the head and torso of a man.

You have also won the Tom McGrath Trust’s Maverick Award and David Memorial Award how important have these been to you career?

Yes awards are really important, they often have money attached and they can get you noticed. The Maverick Award was initial recognition and funding for the project I am now doing for the Edinburgh International Festival.  Working with the writer Mary Paulson-Ellis, this is a very different project to painting and involves documenting the evolution of an idea (for a Children’s picture book). The David Gilchrist Award was made for a painting in the annual exhibition of the Royal Glasgow Institute of Fine Arts. 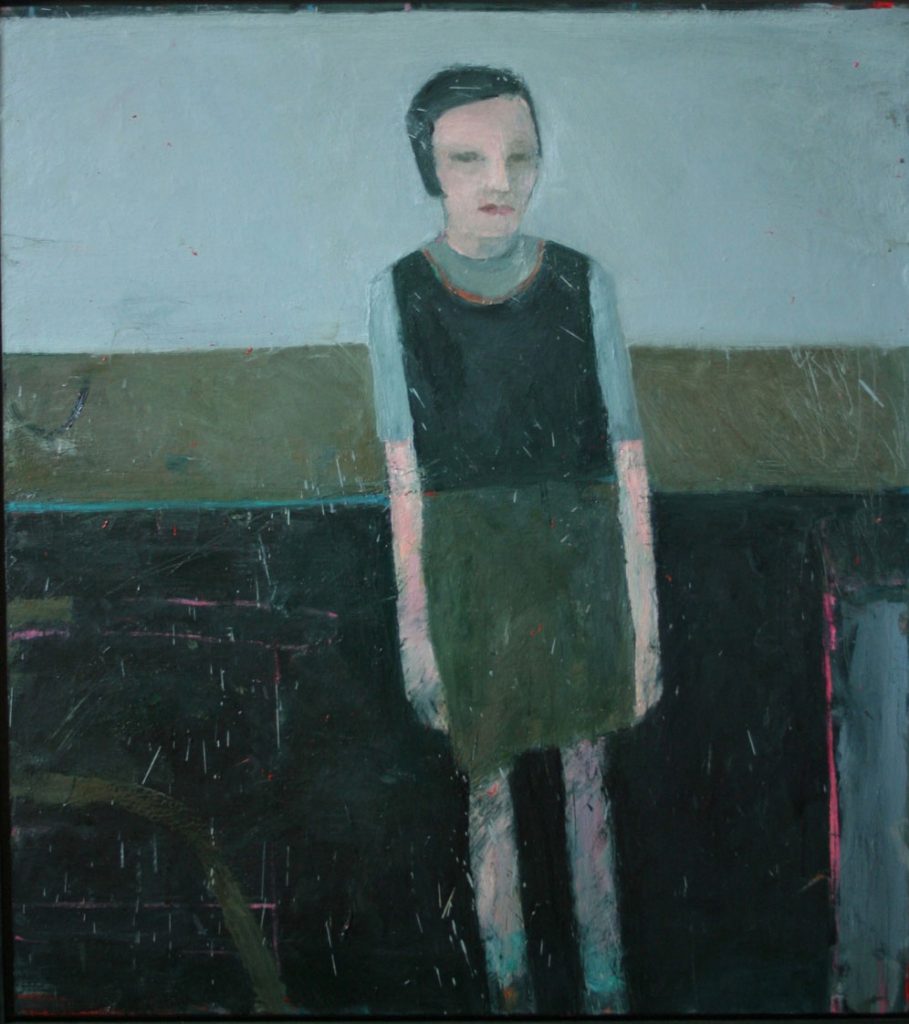 The backgrounds on your paintings, can you elaborate on them?

The backgrounds are painted surfaces, unspecified but sometime look like horizons/landscape. I have been very interested in the work of Anselm Kiefer and also Antoni Tapies and the idea of the wall – building layer upon layer which reveals a history. So I scratch the surface, splash on to it and so forth in an attempt to create an animated surface. 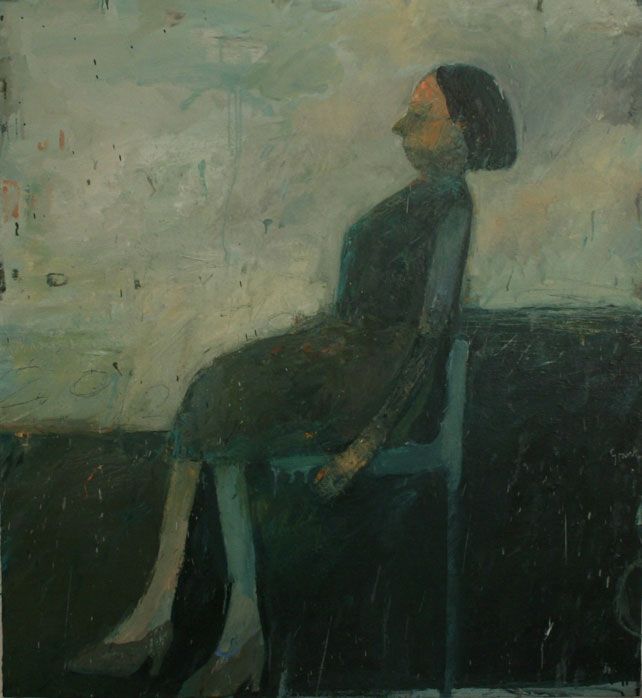 The horizon plays a huge part in your work.  How do you decide on these and your use of colour?

It is more about trying to find a unity of form and space, so dividing the space helps with that process. I often lay bright colours on top of darks, and also apply glimpses of colour in the background and in the figure which emit a sort of light. 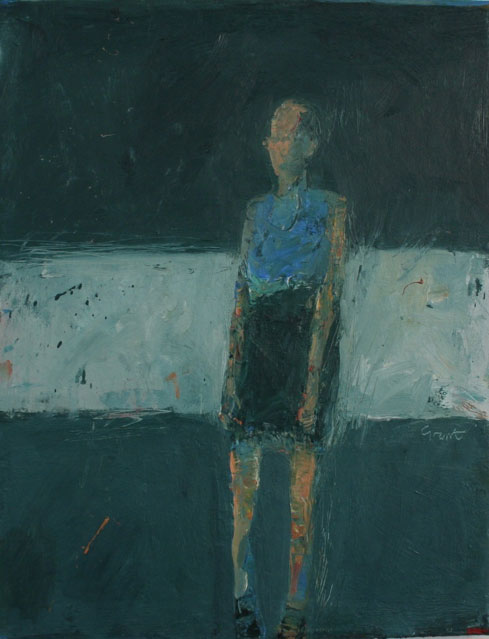 Tell us about your figures?

The figures are invented / imagined and grow out of an intense dialogue with the paint. Where paint is laid on and scraped off until something starts to work and a figure begins to assert itself. 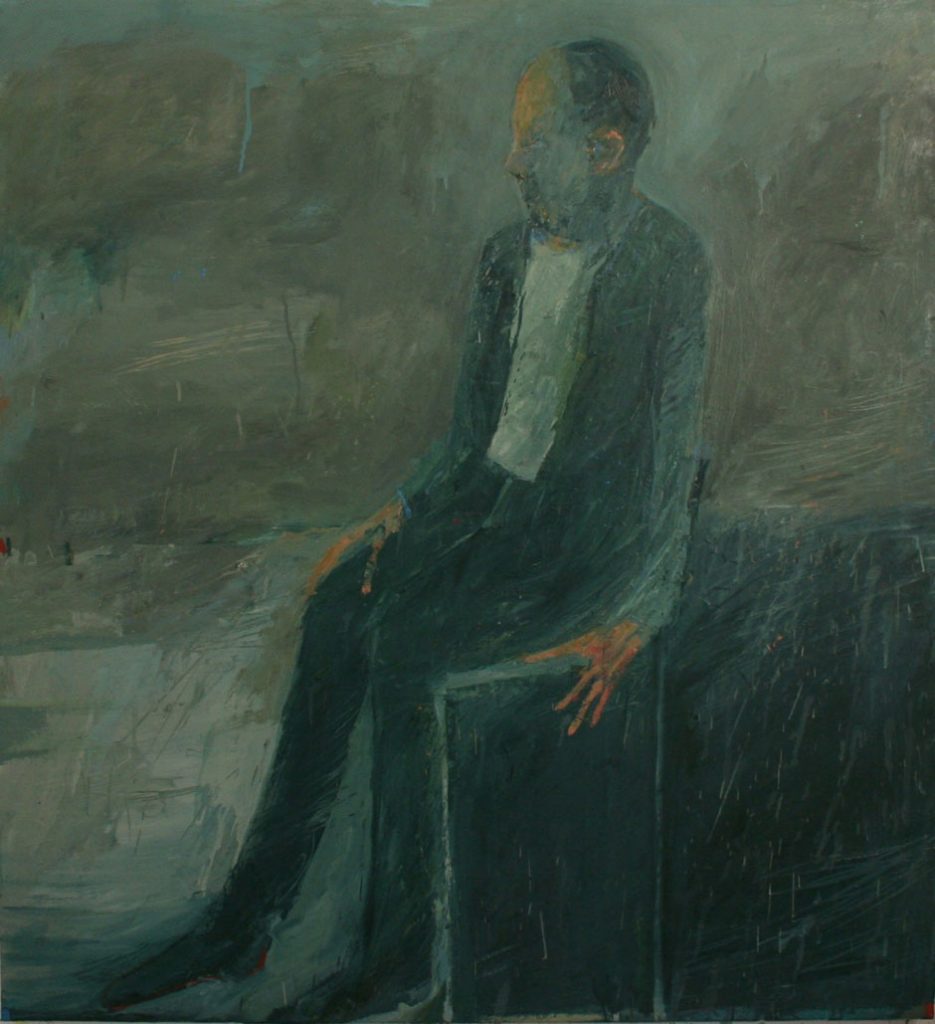 Do you use models?

Up to about 2008, early 2009 all the time. In fact I worked with a select group of sitters over a period of time, so working on the same drawing or painting for weeks and months. I was interested in what would happen in long durational works. I stopped working like this in 2009.

Do you take life drawing classes?

Yes I have taken many, many over the years but not now. I think it is good to move away from the model to see what direction your work can take.

Your work is very intense; with you wanting to participate.  Is this your aim?

I suppose my work is intense, I never think of it like that. But it is certainly a long and intense process. My hope is that it conveys some kind of human feeling and if people react on a feeling level then I am very pleased. 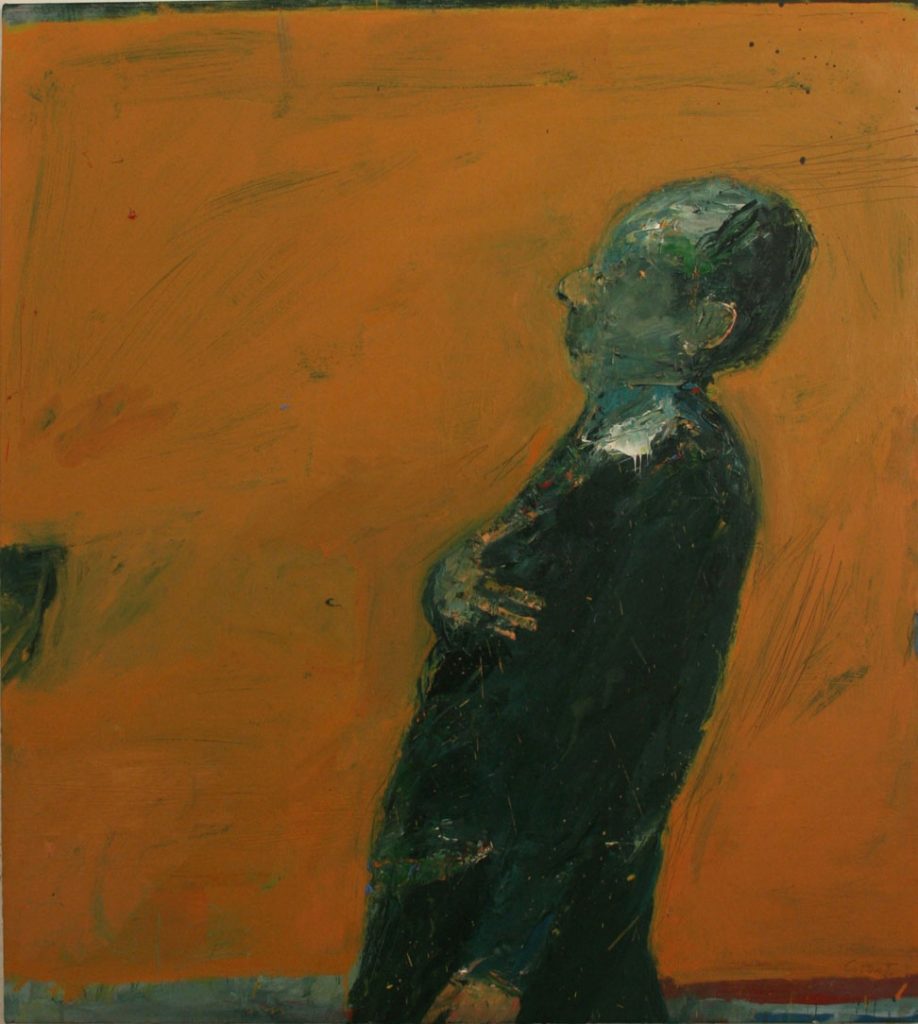 Man with hand on chest

Can you take the work “Man with Stick” and take us technically through this as well as your emotional input into this work?

The feeling behind the gesture as you lay paint on is important to me, so I am quite a physical painter and there is something about the physicality of the painter’s gesture that interests me. I think Rembrandt knew all about this.  Man with Stick is invented although I think that kind of figure exists everywhere. But in saying that the stick may have come about in order to balance the composition. And as a result of that process a human feeling thing happens too. 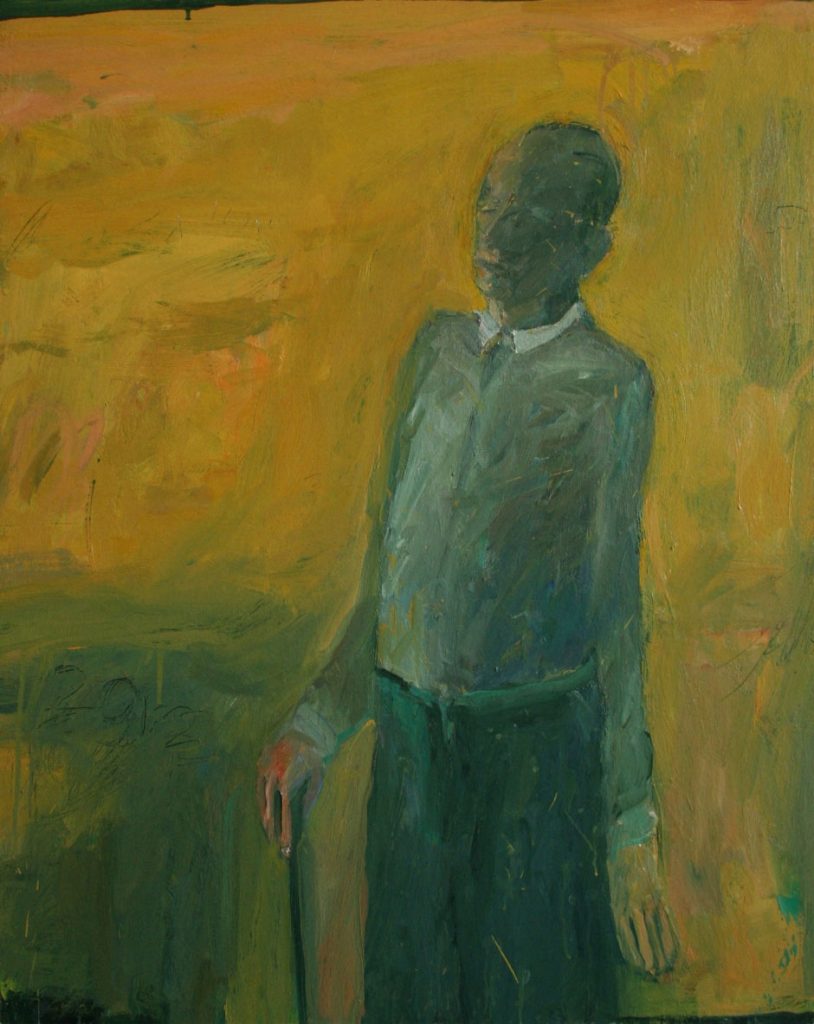 Can you discuss the choice of size of your work?

I work in a range of sizes, the largest only around 110/120cm. Bigger pieces take longer to resolve and usually make way for a body of work so they are really important to make a breakthrough to new things. But small paintings are good too, easier to manage because of size but very tricky because small.

Your figures are usually solitary; they portray an austerity. The minimal movement of the figures allows the humanity to show through.  Can you explain your thoughts on this comment?

You put it really well in your question; I am interested in how the simplest of gesture can seem to reveal something much deeper, with a history even.  I suppose it is a kind of vulnerability that I am drawn to.

A little inside knowledge, can you tell us about your studio?

My studio is in a complex of artist studios run by an organisation in Scotland called WASPS.  It is not that big but has a huge windows and a very high ceiling, half the studio where I paint is quite messy as paint tends to get splashed around over the wall and floor. The other half of the studio is where I can draw, drink coffee. I often listen to music when painting – classical and opera so there are certain composers who I particularly relate to and maybe the feeling evoked in certain pieces of music also connect to what I am painting. 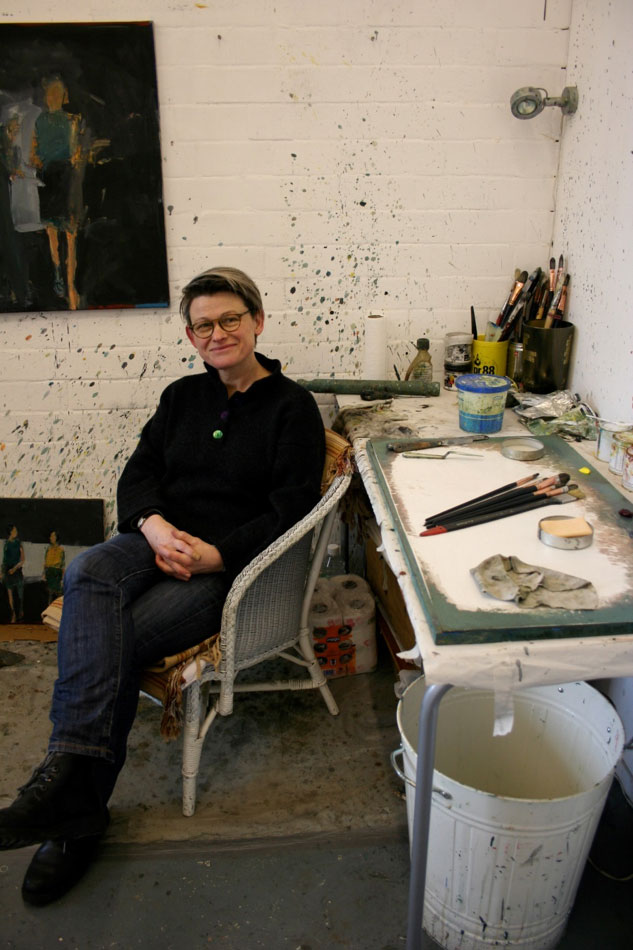