Athena Jahantigh’s animal ceramics are a connection of East with West and the past with the future. The addition of wonderful texture brings alive her animals, who have both fur and feathers. Athena Jahantigh is able to create the image by the use of shape and only the smallest detail to represent the actual animal.

Zoneone Arts is delighted to bring Athena Jahantigh to you… 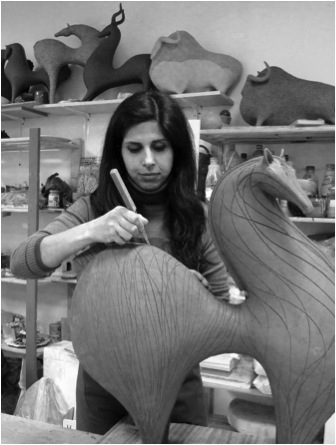 Can you discuss the way you have been able to use simple gestures of the gazelles, to give different characters to these beautiful animals?

I started with a gazelle first with its head turned backwards. It was a slightly different reproduction of a model I had previously made in porcelain. Here I wanted to change, I wanted to give it a little bit more movement while remaining close to the main forms of the first model. I wanted it to have the look of a true gazelle turning its head down, looking left or right or raising its head etc… I had fun changing the movements of my imaginary gazelle in an exaggerated way and that’s where we can realize the power of imagination in creation. 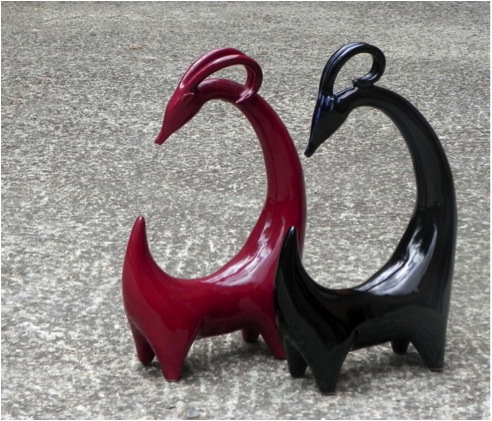 The size of the work:

The tallest gazelles in the series “Poetic Gazelle” can reach 30 cm.

The technique you have used to make the gazelles:

The gazelles are made in black faience and hand built, from clay slab strips. I always start with the legs and I finish by the horns or ears… 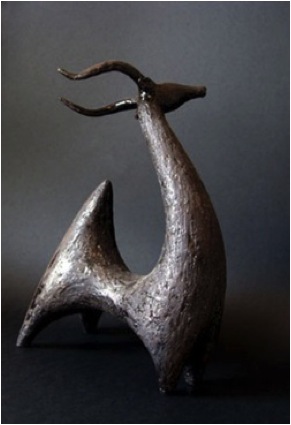 What animals do you use in some of the series?

To date, the animals I’ve made are categorized as follows: horses, gazelles, bulls, rams and goats, and birds. Apart from these few animals, I made a cat one time. I think that there are cultural and symbolic reasons. 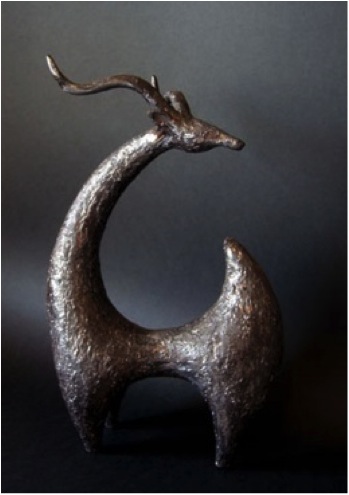 Why not make an elephant or a rabbit? I can say that I love almost all animals in the nature, some because of their beauty, and others for their strength. Some amaze me with their intelligence and others by their affectionate or extraordinary side. There are too many things to see, to observe and to feel to be able to express them in a sculpture. I don’t see any point to present in my work all kinds of animals because I make animal sculptures, I prefer to focus on those that have a special meaning to me. The four legs (the general term I use for some of my animals) mentioned above are animals that have existed for thousands of years in Iran, my land of birth. They are drawn and made in sculpture since the time of my ancestors until today. Of course there are others, but here comes my choice and my personal desire.

Where did you watch and study gazelles?

During my art studies in Iran, for the theoretical part of my thesis, I studied the drawings on ancient pottery in Iran. One of the cities studied, “Shahr-e Soukhteh” (meaning Burnt City) which was founded in 3000 BC, had many drawings of gazelles with a characteristic: the tail of these gazelles raised up. It is from these drawings that I imagined and drew my first gazelles.

Shahr-e Sukhté (meaning “[The] Burnt City”), also spelled as Shahr-e Sukhteh and Shahr-i Shukhta, is an archaeological site of a sizable Bronze Age urban settlement, associated with the Jiroft culture. It is located in Sistan and Baluchistan Province, the southeastern part of Iran, on the bank of the Helmand River, near the Zahedan-Zabol Road. In July 2014 it was placed on the World Heritage List of UNESCO.

The reasons for the unexpected rise and fall of the Burnt City are still wrapped in mystery. Artifacts recovered from the city demonstrate a peculiar incongruity with nearby civilizations of the time and it has been speculated that Shahr-e-Sookhteh might ultimately provide concrete evidence of a civilization east of prehistoric Persia that was independent of ancient Mesopotamia. 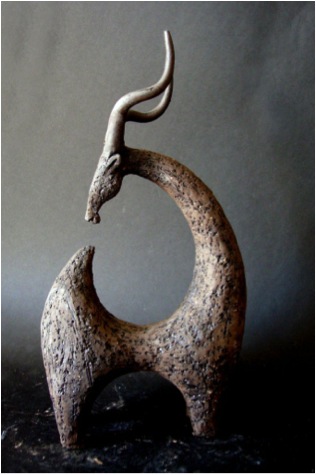 Do you work from sketch books or photographs?

Sometimes I study pictures of animals or observe them in real and near. But there is above all the legacy left generously by our ancestors all over the world (and particularly in Iran for my work): designs on pottery, on the cave walls, large and small sculptures or containers in the shape of animals. That forms a magical mix that whets my imagination and allows me to draw. My work is never made from a specific drawing or photo, although sometimes consciously or unconsciously I’m close more or less to an already existing form.

From Legs without Leg – series

Your series ‘From Legs Without Leg’ – where did this simple but exciting idea come from?

My animals are divided into two groups: birds and four legs. “Four legs without legs” was a series made for an exhibition in Paris. It started with some stylized rams up to the point that their legs disappeared and then some goats and other animals in the same spirit, they were different from those that I used to achieve. So I decided to name them by their differences. 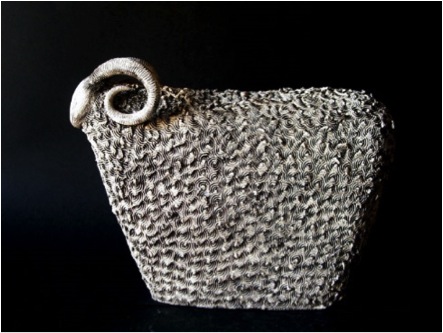 Through the use of texture and curved horns you have allowed the viewer to know the animal. Can you expand on this idea?

The horns, in addition to being beautiful and delicate, are also the symbol of the strength of the animal. But it is the hair and the texture created to imitate them that make this animal looks like a ram or a goat instead of a gazelle or antelope. Although in this series the horns and the hair texture are two main elements to recognize the animal, in the end, it is a whole set of elements that reminds us of a particular animal. For example, I do not see myself making a gazelle with a rectangular body. 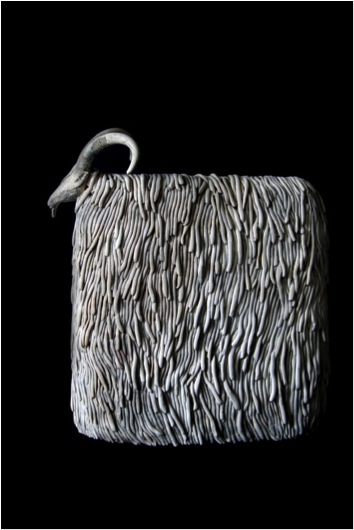 What is the material you have used?

Most of the pieces in this series are half- glazed white faience. The enamel is used to give more color to the piece but particularly to bring out the texture. 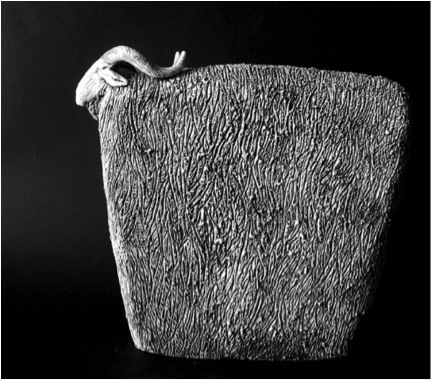 Can you discuss the size of this work?

The height of the pieces of the series varies from 20 cm to 40 cm.

Discuss, the simplifying of shape in this series?

In “The four legs without legs” series, I tried to remove a maximum of detail in terms of shape, as when we are watching a herd from a distance: details are gone. The body of a “four legs” can practically fit into a rectangle. The fact that some “four legs” have hair such as a ram makes it easier to make their legs disappear and get them into this rectangular shape, and this accentuates at the same time their skin and texture characteristic .

Are they actual birds or rather representations?

My birds are only representations and do not correspond to a particular species. Some are limited to a form which can remind us of a bird. Since nearly always, a bird is the symbol of freedom, especially the flying bird, I prefer to represent it sitting, resting or asleep. These symbols of freedom will remain forever at rest and at peace: they do not need to fly to be free. 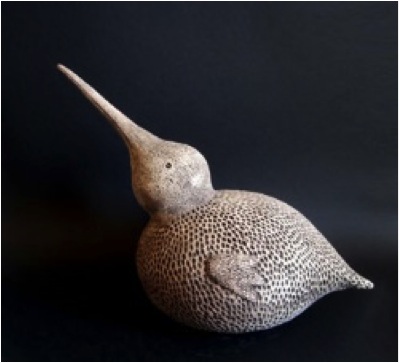 Again explain the importance of texture to get the feel of feathers?

One of the first reasons I added a texture to a piece has been to overcome a technical problem. At first, I didn’t have the opportunity to work sandstone, only faience. I didn’t like the texture of the pottery after firing, and I prefer sculptures without enamel and without patina. I looked for another solution to cover the works: texture. In the end, texture had become an indispensable part of my work, as if not adding any texture left the animal naked. A passion that requires to be patient, and I continue to used it in my work even on sandstone 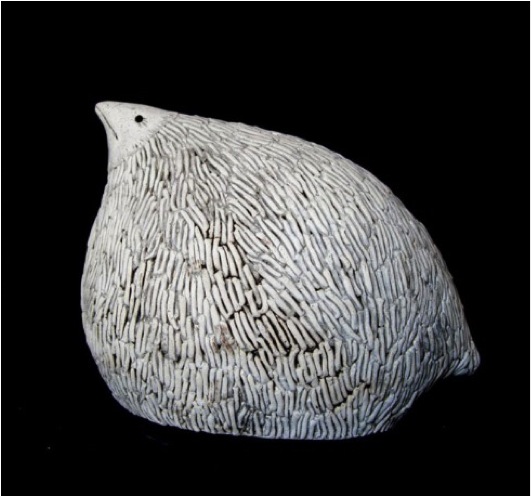 Can you discuss the difference in your sandstone animals?

My latest works are presented in the series of sandstone animals. My inspiration travels between past and present, between my roots and my imagination. My sources have not changed, regards the technique, there was a big change. 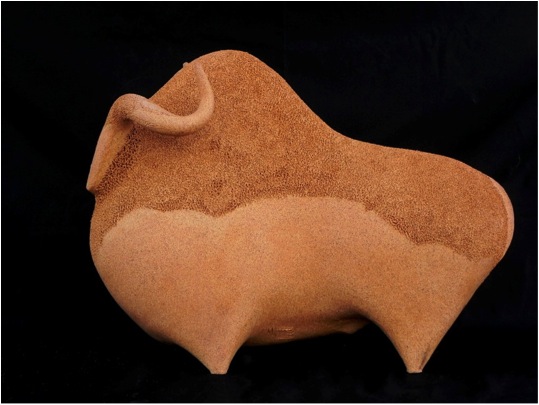 Thanks to this new clay, I was able to significantly increase the size of my works, limited only by the height of my oven (71 cm). There are different colors of clay that are beautiful, but as I mentioned above, it has become difficult for me to make a piece without texture, so most of the time they are “dressed” with texture. These are often created by repetitive movements cutting or adding material and they do not take precedence over the main shape. The texture becomes the poem offered to the earth…

The pieces are fired at 1280 ° in a gas oven with oxygen reduction. They are manufactured and hand-modeled with clay slab strips. I always start with the legs and I finish with the ears or horns. 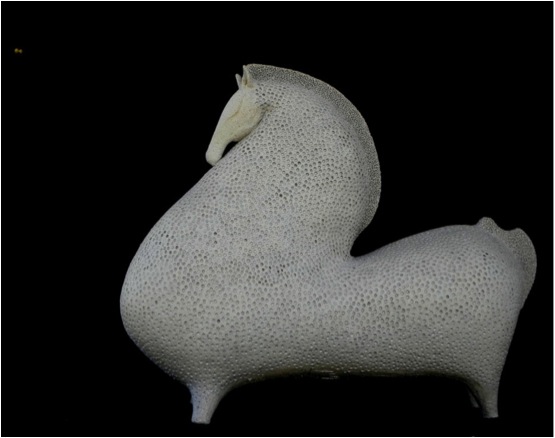 You began your studies in Iran, can you briefly discuss the academic availability for yourself in Iran up to 2006?

I studied Art for four years in Iran. My father, a painter and art teacher, allowed me to have some knowledge about art and gave me the desire to go on in this way. I started my studies in 1996 at the University of Art in Iran, during which I specialized in ceramics.

What was the factor in you going to France to study at the Sorbonne in 2005, and then to go onto your Masters of Fine Arts there?

Since I was young, I wanted to go to France or Italy to study. At that time, the history of Art in these countries, their museums and cultures fascinated me, especially France, which I had read several historical novels. Finally, I had the opportunity to come to France to follow at first a master of fine arts in 2005 and then a doctorate in fine arts that I got in 2012. At the beginning, I wanted to do graduate studies in ceramics, which was not possible in France. I chose the visual arts, a choice I do not regret because it allowed me to know other artistic universes.

Discuss the importance of Art and international travel for a woman from Iran?

It is not always easy to go to another country to study, especially from Iran. I think the opportunity to make art and to travel to learn more and be able to interact with strangers, whether you are a woman or a man, regardless of where you come from, it’s an extraordinary chance.

About fifteen years ago, an unmarried Iranian woman needed the permission of her father to get out of Iran. Today this law no longer exists, and there are many more girls who are studying art than boys.

Can you expand on your own position as an Iranian woman artist in today’s climate?

Being an artist in Iran is not at all difficult. Art and poetry are an inseparable part of our culture with all its ups and downs. Whether, you are a man or a woman, you can continue your art without any worry under the condition; that the object of your art does not criticize the current politics or religion, also your art is not about nudity. 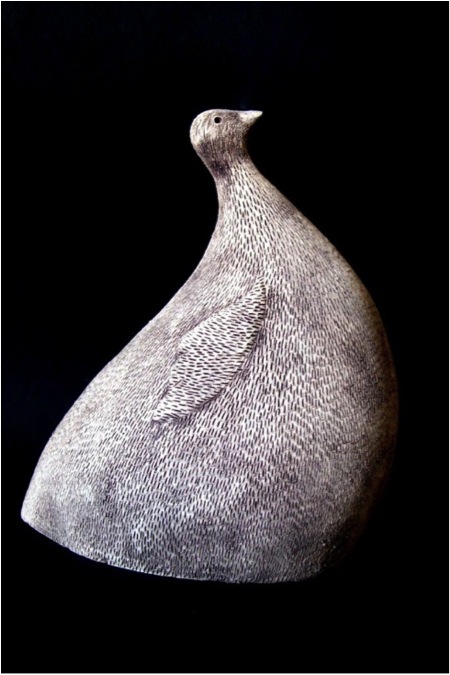